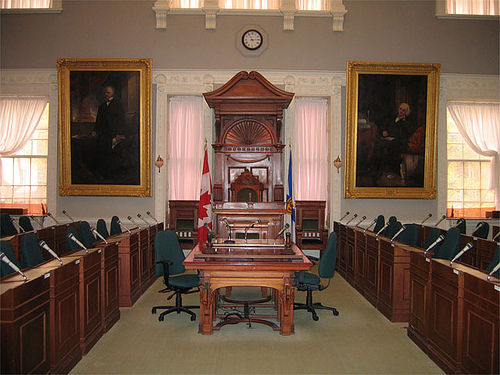 The Atlantic office of the Canadian Taxpayers Federation is urging the Nova Scotia government to review the number of MLA seats in the provincial legislature.

The Chronicle-Herald reports that Kevin Lacey, director of the CTF's Atlantic branch says that "government restraint" should be reflected in the number of representatives in the House. An ideal figure he suggests is paring back to 33 members.

Here in Halifax the move to cut back seats for municipal councillors has already been approved by the Utility and Review Board, now we're asking you Haligonia if you think a similar cutback should apply to our provincial politicians?

According to the Herald article, Lacey cites funding cutbacks to sectors such as education and health care and makes the argument that if government is willing to take the axe to these programs, they should also be willing to re-evaluate the cost to taxpayers of having 52 seats in the legislature.

Read the full article here and weigh in with your opinion: http://www.thechronicleherald.ca/novascotia/35759-group-urges-cutting-mla-total-33