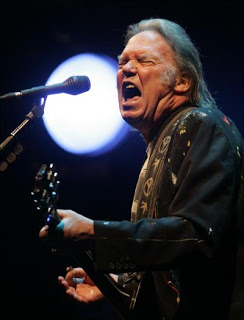 *Although I’m a few days behind in blogging about Saturday night’s amazingness, I’m still, in fact, giddy. Neil Young and Wilco put on the best rock concert I’ve ever been to (and that’s including the Stones and a bunch of other old fogies).

The stage was set with an old fan that slowly turned and cast flickering shadows across the stage. A man inexplicable spent the concert painting behind the band. A red phone sat on stage for some reason… probably a direct line to the President. Letters and numbers hung above the stage, in a seemingly random order.

I am a big fan of Young’s early work, and was not disappointed with his song choice that seemed to be split between very old and quite new. Acoustic performances of “Needle and the Damage Done“, “Heart of Gold“, and “Old Man” were performed like it was the first time instead of the thousandth. Other songs really split the stadium with their raucous sounds and never-ending guitar solos. I really liked “Cortez the Killer“, “Hey Hey, My My“, and “Powderfinger” for all their power and grit.

Young played a fair bit of his newer work which is a little more twangy and “down home” than his earlier stuff. Much to my dismay, he did not play “Let’s Impeach the President”, which would have been hilarious. Also missed was a favourite tune… “Harvest Moon”. Ah well.

While I am not a big fan of “Keep on Rockin‘ in the Free World” (too many benefit concerts, too much wank), there was no denying the energy in the crowd when Young burst out with the first few chords. Near the end of the song, the letters above the stage went out, save for four: N E I L. Amazing. The encore was a Beatles cover (I nearly died). With his wife Pegi on backing vocals, Young delivered a stirring rendition of “A Day in the Life“.

Thank-you, Halifax. Maybe it was all the Nickleback concerts and the frequent Hedley appearances that made you want to repent. Here’s my countdown for best “big” concerts of 2008:

1. Leonard Cohen
2. Neil Young and Wilco
3. Bob Dylan
4. Ozzy Osbourne
5. BACKSTREET BOYS (If you were not a 12-year old girl in the mid to late nineties you will never understand)

Honourable mention goes to my homie Crispin Glover, who is a real piece of work. He did not sing “Clowny Clown Clown” but I forgive him.

Next show is the return of Aussie Pink Floyd who I think are performing The Wall in its entirety (last time I saw them their first set was Dark Side of the Moon [almost typoed that “Dartmouth” of the Moon]). 2009 is already heralding rumours of The Boss and KISS making stops here… anyone feel like re-creating Detroit Rock City? I call James DeBello!

"Look out, Mama, there's a white boat comin' up the river."
https://haligonia.ca/qlook-out-mama-theres-a-white-boat-comin-up-the-riverq-1871/