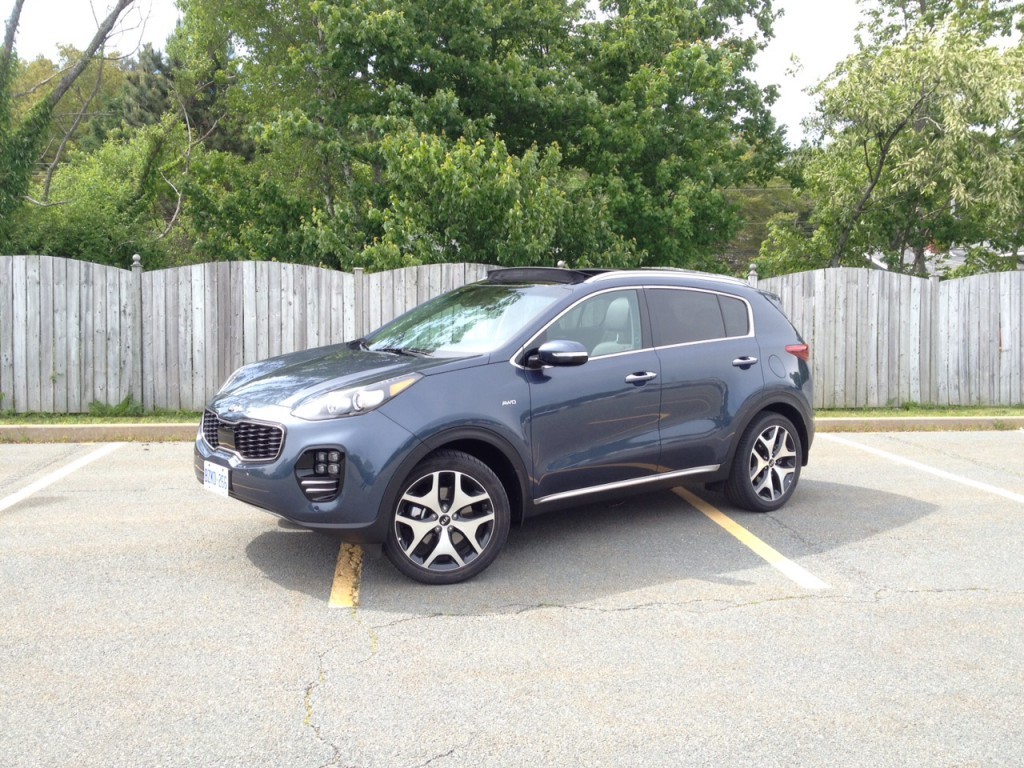 If you remember this animated yelp from an old Kia commercial, then I suppose Kia’s marketing gurus of the time deserve a pat on the back. If you don’t, let me enlighten you.

When Kia redesigned the Sportage in 2008, they clearly wanted to market it as a fun, youthful off-roader. So they came up with a commercial starring an enthusiastic moustached man behind the wheel of a Sportage which pulls up alongside three men of the goth persuasion alongside their bus which is out of commission due to flat tires. Enthusiastic man then offers them a lift, and then drives wildly throughout the jungle while making stereotypical comments about goths while using a stereotypical Hispanic accent. He encourages them all to adopt his “ayeee!” mantra and to stop being Debbie Downers. And in the end, they do – seemingly because the Kia Sportage is just that fun that it’s contagious.

You can see this, uh, interesting piece of marketing here.

Ironically enough, a friend reminded me of this commercial a few days I was due to pick up Kia’s latest iteration of the Sportage. I was only to spend a few days with it.

After watching the commercial then immediately stepping into the 2016 fully loaded SX Turbo model, it became clear how much Kia has changed as a brand in a relatively short period of time. 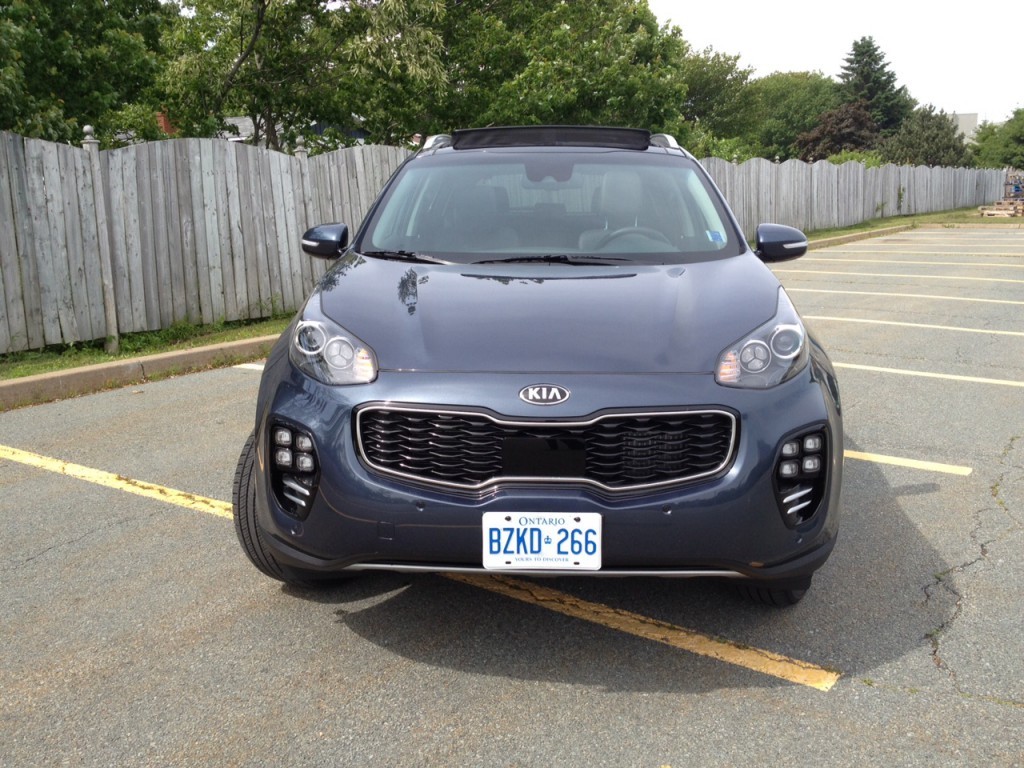 Let’s start with the looks. While the 2008 version looked fine by the standards of the day, it’s clear that nowadays, Kia desperately wants people to recognize its cars as a Kia, the same way even the most unseasoned individual can recognize anything from BMW as a BMW. As such, it has incorporated its corporate face onto the new Sportage. This face typically consists of a tiger-nose grille, along with quad fog lights and LED daytime running lights on the top trim models. The look works well on just about every product it now produces. That is, except for one – the Sportage. I can’t quite put my finger on it, but it looks like some sort of guppy on steroids. That isn’t to say that it looks ugly, just that it looks a bit off. Thankfully, the nice side-profile with matching 19-inch wheels help to round things out a bit while the rear end styling keeps the familiar look of the previous generation. Overall, it’s a nice looking vehicle, but not as obviously good looking as its siblings.

Inside it a bit more typical and this is very much a good thing. The high quality design, materials and easy to use controls will appeal to pretty much everyone.  Being the top trim, I benefitted from niceties such as navigation, satellite radio, cooled seats and a panoramic sunroof among a long list of other features. 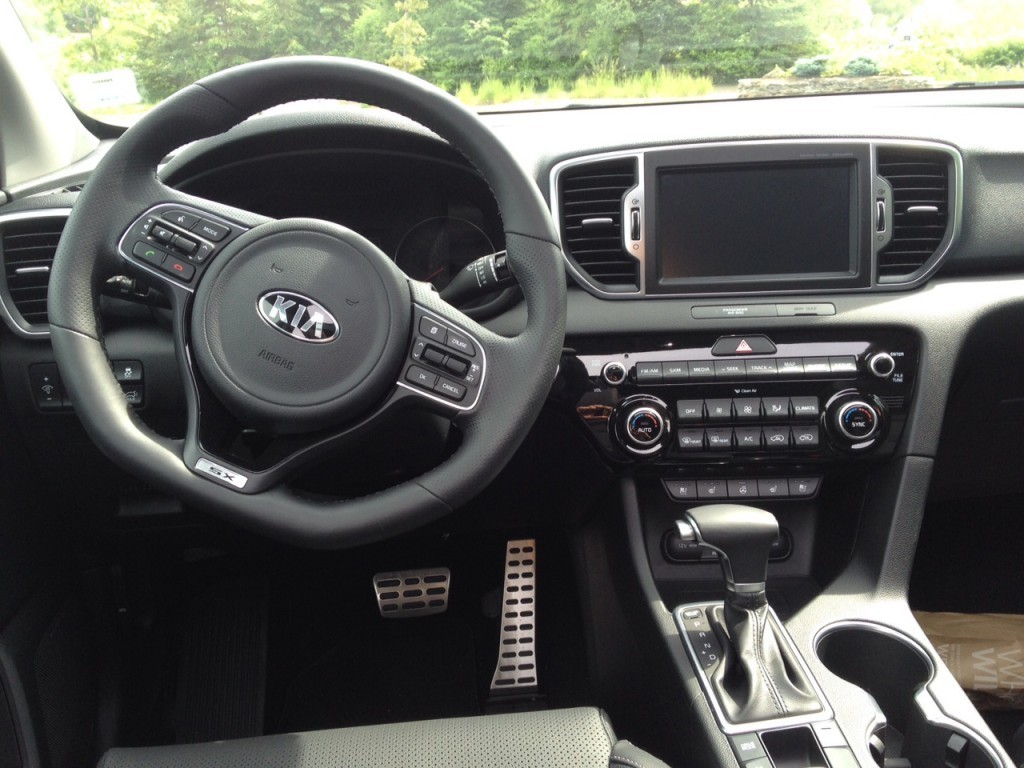 Interior room is increased, but it’s still smaller than some of the competition such as the Toyota Rav4. Still, it provides adequate room for most matched with comfortable chairs and leather that feels to be of higher quality than models in the past.

Powering the SX trim Sportage is a 2.0 litre turbocharged 4-cylinder which produces a healthy 237 horsepower and 260 pound feet of torque. If you want a V6, you’ll have to look elsewhere, but to be honest, there really is no need as this thing is plenty quick – the only thing missing is the nicer sound of the V6.

Pulling away from a red light is a breeze and the six-speed automatic shifts smoothly. While it doesn’t feel as solid as a big German sedan on the highway, it still feels composed and wind noise is kept to a minimum. There are plenty of driver aids to take advantage of including adaptive cruise control and lane keep assist. 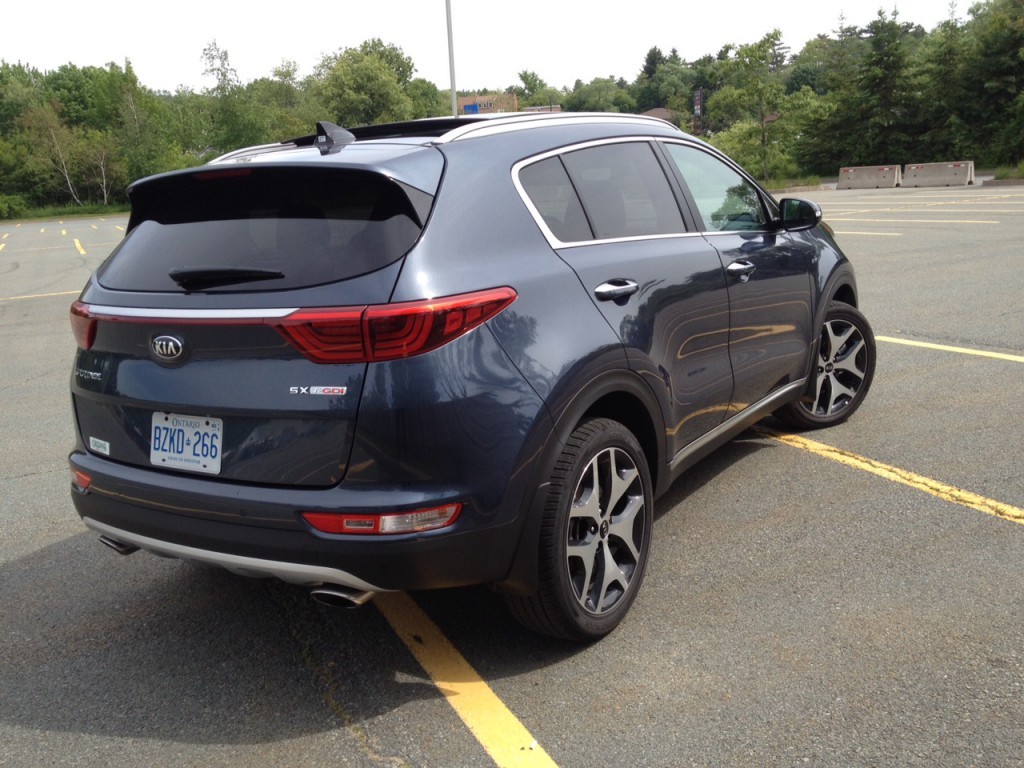 In the bends, the Sportage is a good all-rounder providing adequate balance while maintaining a comfortable, non-jarring ride. Its smaller size makes it feel a bit nimbler than some of its competition. For every day driving, those big 19-inch wheels with low profile tires means you’re more likely to feel imperfections in the road, but not overly so.

After about 3 days of driving, I was returning 11.3 L/100 kms. This isn’t horrible, but it also isn’t stellar. There is an eco-mode that may improve those numbers slightly, but I rarely used it as I found that it robbed the Sportage of its soul. It became dull and gutless. 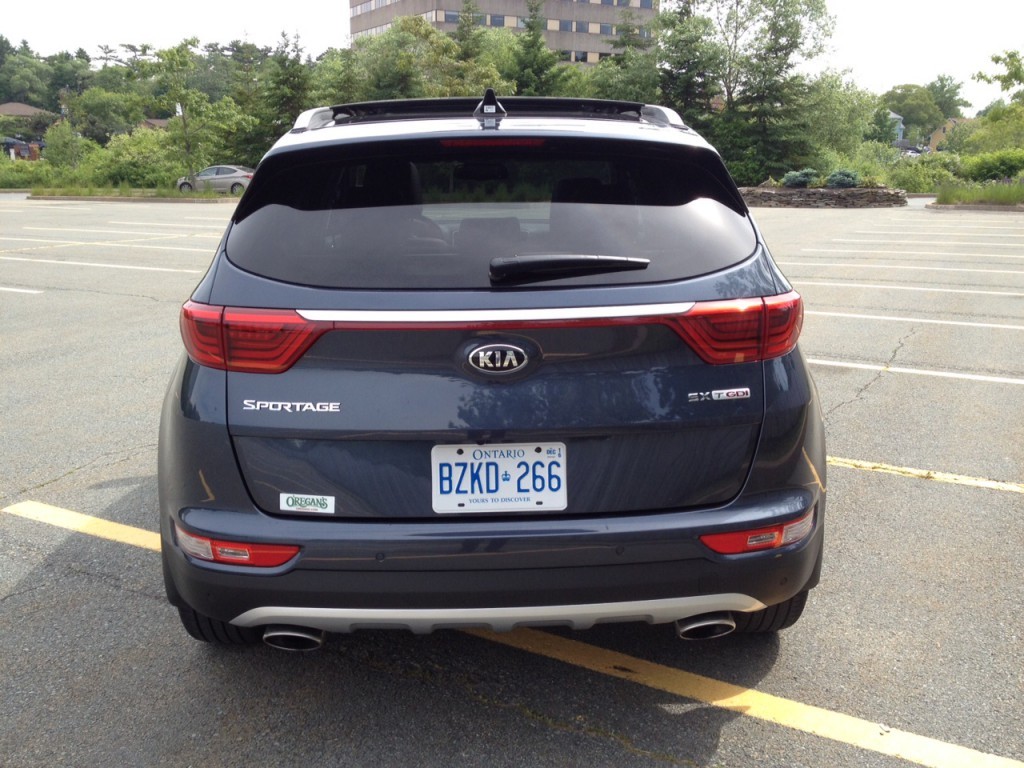 But it’s clear that Kia wanted its Sportage to be more grown up. Instead of Ayeee! They wanted to showcase just how mature they have become and want to be taken as such. The only problem? Being more grown up comes at a price. At over $41,000 for this top trim, it’s not only more expensive than most of the competition’s top trims, but you’re entering a whole other segment at the price point which includes the likes of the BMW X1 and the Audi Q3. As such, perhaps the best value lies in the middle trim where you still get a decent suite of niceties. 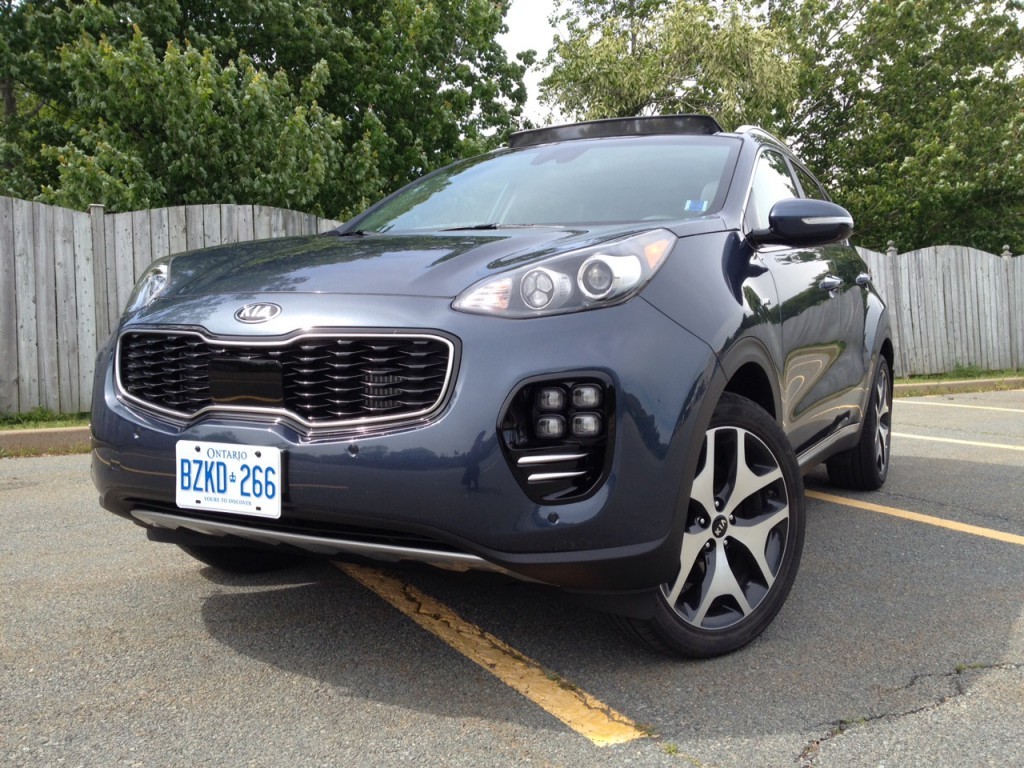