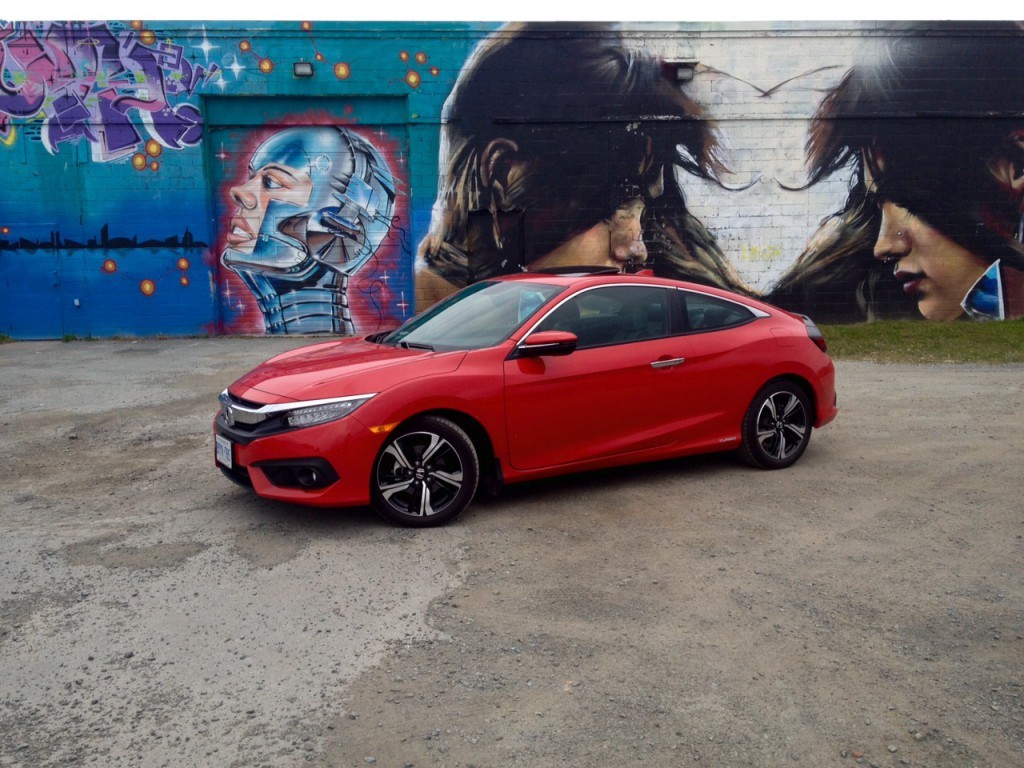 There really is magic in the Civic nameplate.

The amount of times I’ve heard people say they bought a Civic because “everyone else seems to have one and likes it” is a bit astonishing, especially considering it plays in the same playing field as the likes of the Toyota Corolla, Mazda3 and Ford Focus.

The name carries so much positive weight that it still sold handily for the 2012 model year despite being panned as worse than its predecessor by critics. People didn’t care. It’s a Civic. It has to be good then, right?

We see the same mentality with this new version. Honda has smartly added some premium to its best seller along with some much needed style. But they didn’t stop there. They have announced plans for a hatchback to join the Civic lineup along with high performance models such as the fanboy favourite Si and the much lauded Type-R. They are also carrying over the two door coupe – the subject of this week’s review.

This is interesting because the Civic’s rivals either don’t offer a coupe variant or have decided to drop it altogether. So Honda either still believes there is a credible market for compact sedan based coupes or they are gladly willing to have most of the market share to themselves.

Even if the latter is the case, the car still has to be good in order to survive. And, as mentioned, the Civic nameplate doesn’t necessarily guarantee a good product. 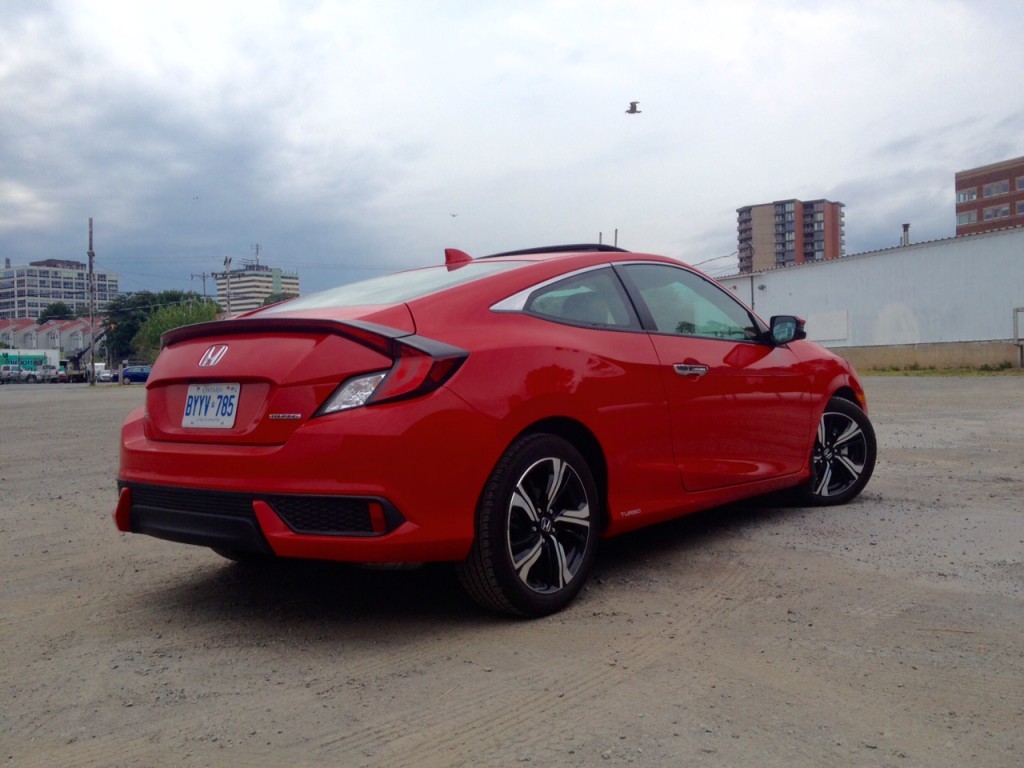 Although Honda hasn’t been criticized nearly as much or as often as Toyota for having boring designs, the product coming out of Korea has certainly eclipsed any sort of attractive Honda designs of the past. As such, Honda had no choice but to become measuredly bolder in their design process.

Given just how often I would feel eyes on me, and return to the car with one or two people taking a closer look, it’s likely safe to say that Honda has succeeded. The sedan already has a four-door coupe-like profile, Honda certainly had its work cut out for it. The largely decided to keep the front fascia the same as the sedan, but aside from the same 17-inch wheels in the Touring model, the coupe gets its own styling identity in the form of a long sloping roofline with a short rear overhang. The rear end gets the most unique treatment with LED tail lights that expand the width of the trunk lid, chunkier styling and a glad lip spoiler that blends with the tail lights seamlessly.

Honda has done a good job with this styling and even though it may be polarizing to some, it definitely can’t be described as restrained or boring. Personally, I really like the new look. The only thing I don’t like are the ‘Turbo’ decals on the side. Let’s save those for the Si crowd, shall we? 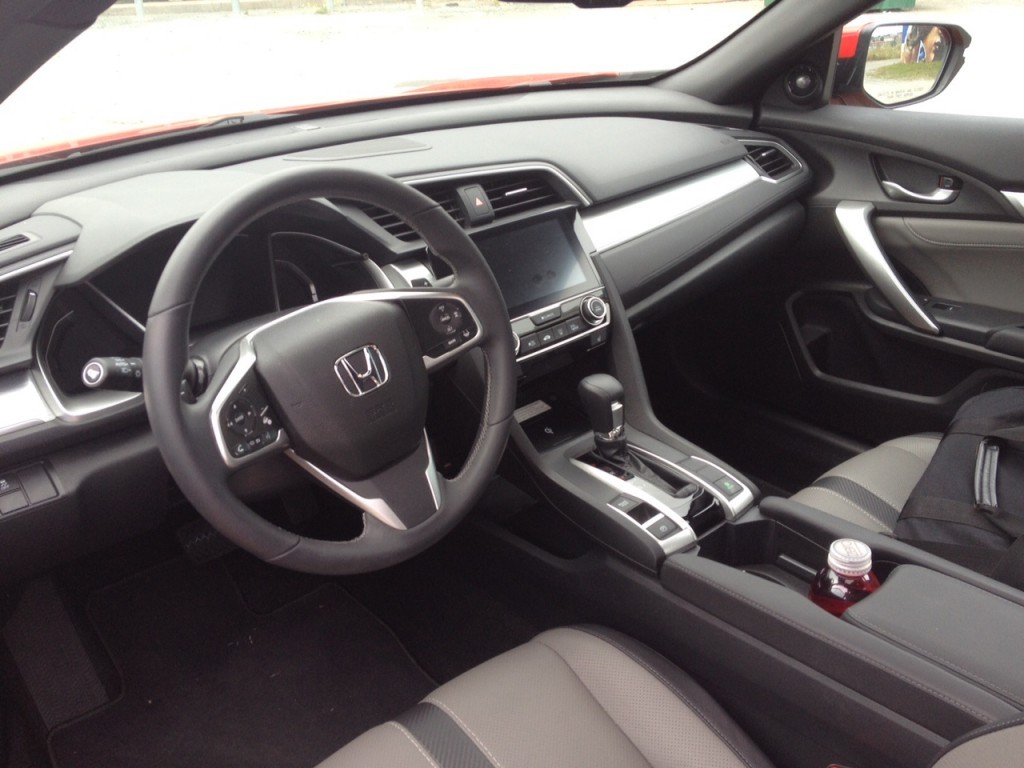 The interior has a very similar layout to the interior of the sedan only with red used as a background colour for the infotainment system instead of dark purple. Honda still seems to be chugging along with their anti-button tirade which is unfortunate because a few people who sat inside said the lack of a volume button would be a deal breaker. Yes, there is the ability to adjust the volume on the steering wheel but the habit for most is to first reach for a knob on the dash.

The infotainment system is clear to read, though it isn’t as responsive as other systems and doesn’t have the most logical layout.  The Nav system luckily works well and the top Touring trim nets you things like adaptive cruise control and lane departure warnings among other safety features.

Being a coupe, it isn’t the most cavernous interior to be in, however there is still good headroom up front. Ditto for the rear, actually, as there is more headroom that you’d expect, however getting in and out is a particularly difficult task unless you’re an Olympic gymnast. But once you’re in there it’s a decent place to be, even knee room is adequate. Most would likely find the trunk space adequate as well and the rear seats fold down if needed. 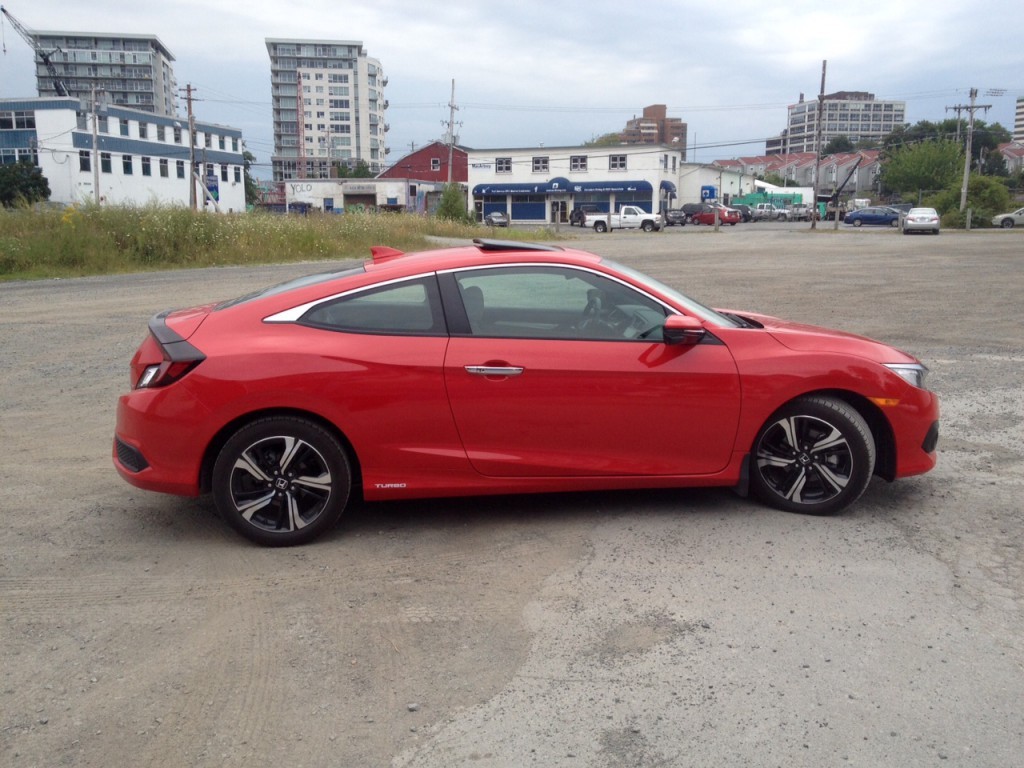 The Touring trim comes with a 1.5 litre turbocharged 4-clynder which produces a healthy 174 horsepower and 162 pound feet of torque which comes in at only 1,700 RPM. This means the Civic coupe can propel itself forward at fairly low speeds and the standard CVT doesn’t interfere too much with power as it hangs on until higher RPMs – a trait that is typically un-Honda, however it still does the trick. In fact, this engine/transmission set up can hang with the previous generation Civic Si, though the Si likely has more gusto during acceleration. With the 1.5 Turbo, acceleration is feels a bit more restrained and more refined.

You’ll likely be interested to know that Honda has decided to offer this engine with a six-speed manual as well. And as decent as the CVT is, you’ll likely be able to get more out of this engine with the manual. I’m confident this engine has more to offer. But back to the CVT, it is also equipped with simulated gears; up to seven to be exact. And even though they are simulated, they actually do a pretty good job at seeming realistic. In fact, I found myself making use of them through the paddles on the steering wheel more often than not. 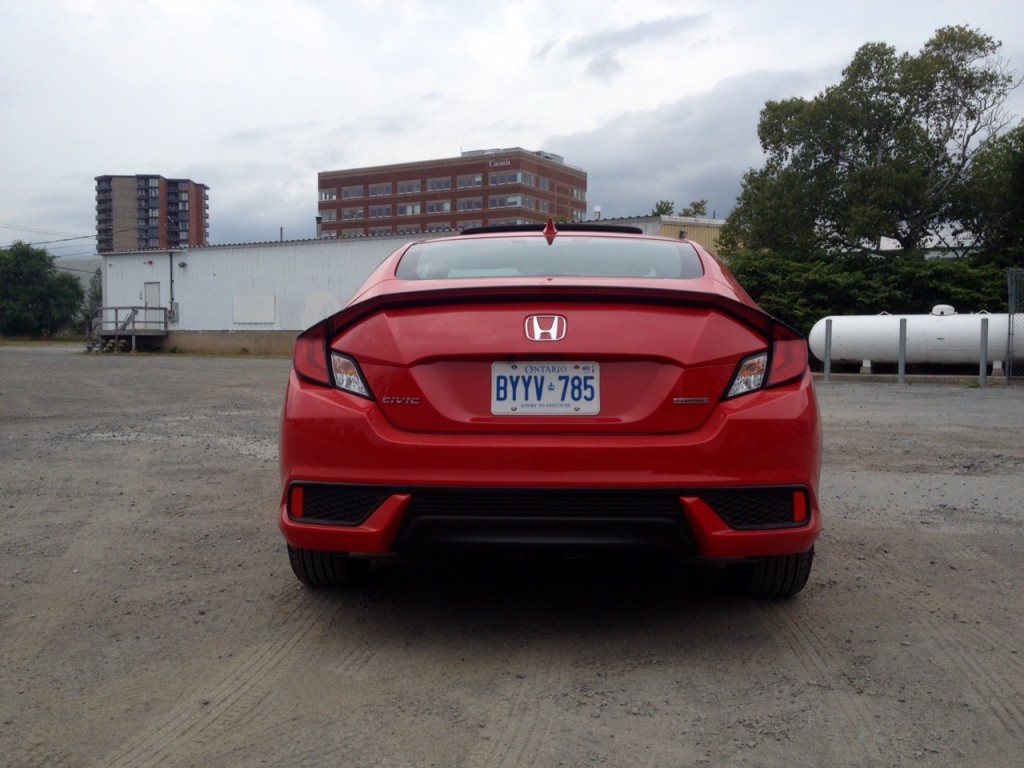 Like most Honda product, the Civic coupe does a good job at feeling solid on the road, despite feeling like a light car. Handling is quite good thanks to stiffer suspension than the sedan, however you will definitely feel most bumps and imperfections in the road as a result. Steering feedback feels quite weighted but not necessarily in a good way, as it doesn’t translate into confidence to the driver.

The driver aids do a good job at keeping you from crashing, though the front collision warning system is a little overzealous and would come on warning me to brake, even though I had started braking well beforehand and had plenty of room to stop. 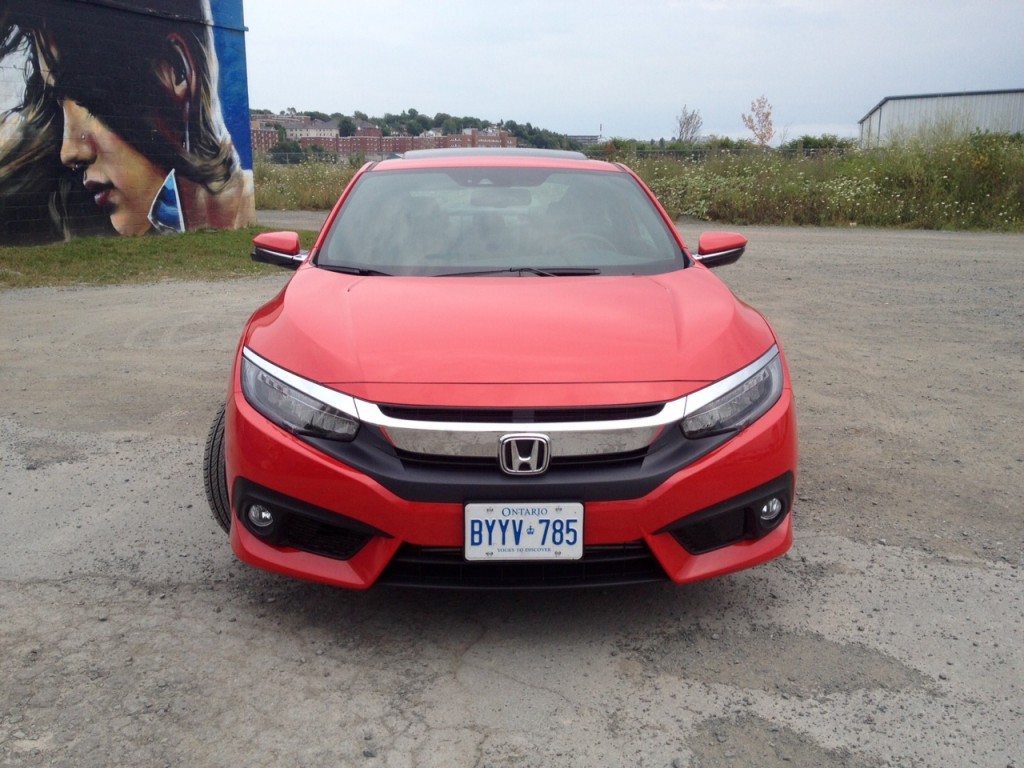 With the CVT, the Civic coupe is officially rated at 7.5 L. 100 kms city and 5.6 highway. During a good mix of both, I returned a rather impressive 6.3 L/100 kms during its weeklong stay with me.

Now, this is the very clear advantage of opting for the CVT. If you go with the manuals, those numbers are likely to be a bit lower, so if fuel consumption is your main concern (and if it is, then one has to wonder why you’re looking at a sporty coupe in the first place) then the CVT is your best bet. 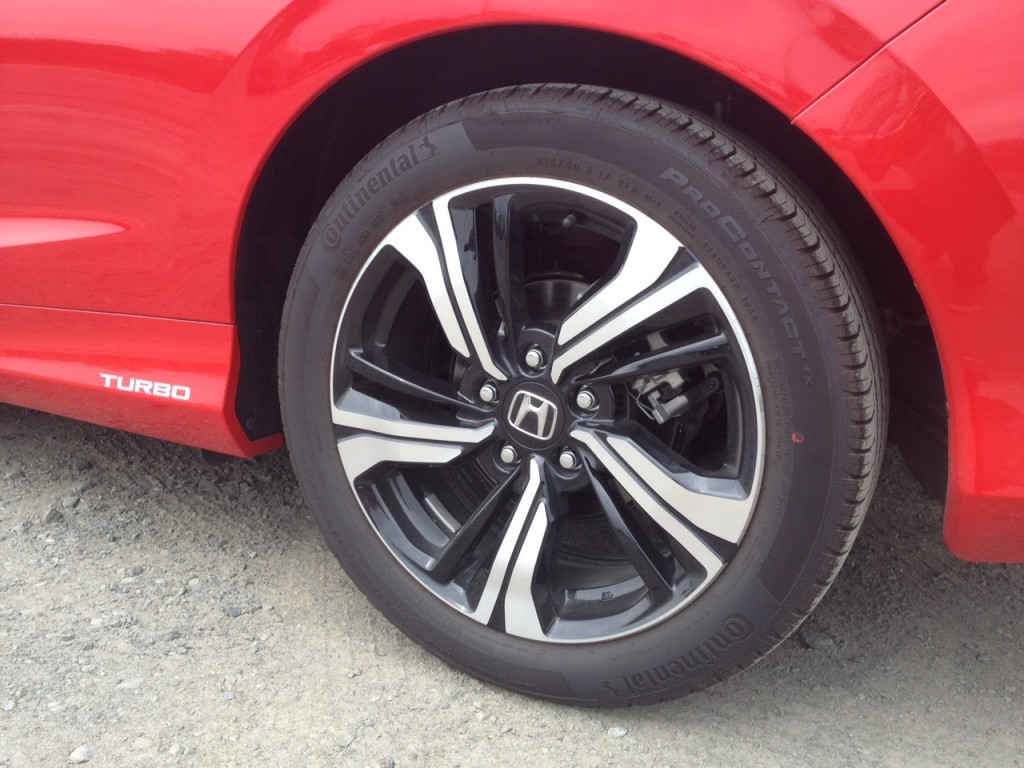 It’s safe to say that the Civic name will continue  to disappoint few, even in this coupe form. The added benefits to opting for the coupe over the sedan are things that typically have people cross a coupe off their lists in the first place. There’s a usable back seat and trunk. It has style that doesn’t necessarily impede outward visibility. And it now has its own unique, distinctive style that seems to be a hit with fellow humans.  Add on impressive performance credentials and good fuel efficiency and the answer why most of Honda’s competitors no longer offer a rival in the segment is clear: the Civic coupe still reigns.

With that being said, let’s not forget that this isn’t even close to what Honda is capable of. As mentioned, we still have yet to see what the new Si will offer. And then there’s the Type-R. If you are at all performance minded, you’d be well advised to, at the very least wait until the manual comes out for the Touring trim, but wait even longer for the Si and Type-R. 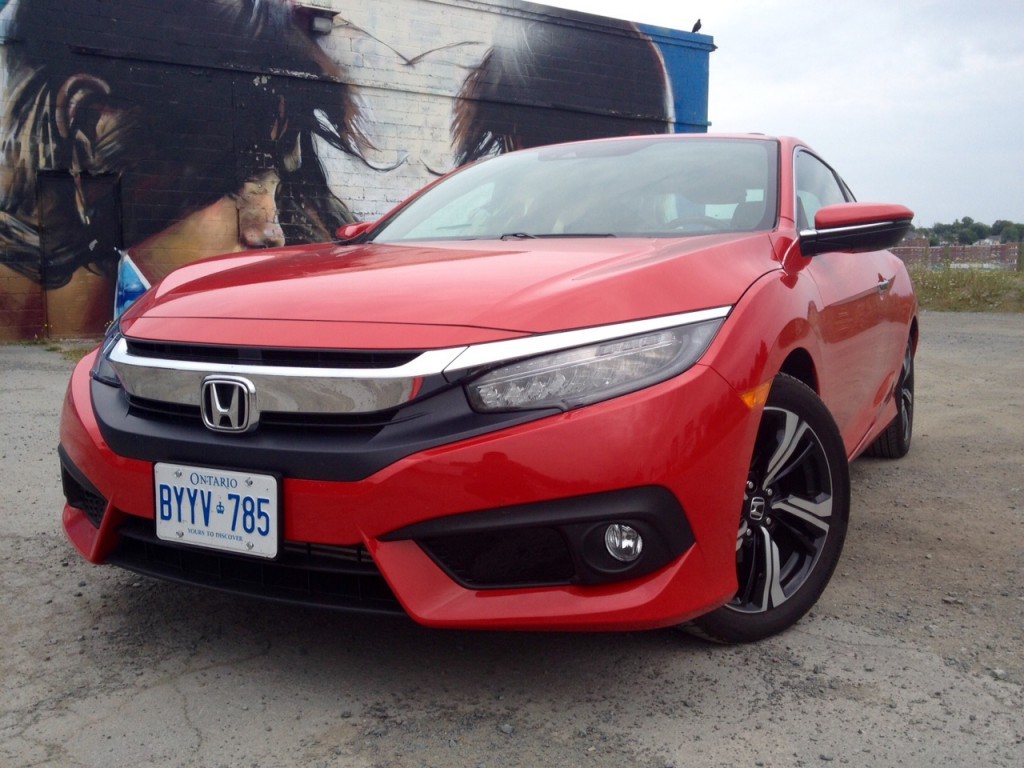