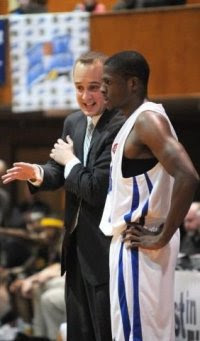 When the Vermont Frost Heaves started the season off with the PBL season with a 0-3 record, the Frost Heaves organization decided to go with a new voice in the locker room and assigned assistant coach, Joe Salerno, into the head coach role.  Salerno, who is a Vermont native, was recently named the PBL’s Coach of the Month.  Joe led the team to a winning record and now his Frost Heaves, along with the Halifax Rainmen, are locked into this season’s playoffs.  The Vermont Frost Heaves currently hold a 10-7 record and are just on the tail of the 11-6 Halifax Rainmen.  The two teams face off in Vermont on Friday night and will now jockey for a position in this year’s playoffs.  I had the chance to ask Joe about his team, Vermont’s matchup with the Rainmen and how well his NCAA bracket did this year.
__________

Romy (Haligonia.ca):  The Frost Heaves had a rough opening schedule with a few road games to start the season but the second half of the schedule looked to be a bit more favourable and you guys are now gunning for a playoff spot. What has been the biggest improvement with this team?

Joe Salerno:  Having 8 of our first 9 games on the road was without question a challenge. I think we were the only team in the league that did not have a single home game in the month of January. So we knew coming in it was going to be difficult. I think we were able to use the schedule as motivation to prove to the league we were still capable of being competitive and making a run at a playoff spot. After going through some turmoil early on in the season, our greatest improvement has been coming together as a team, and buying in to playing “team basketball”. As soon as we achieved this, the wins started coming.

Romy (Haligonia.ca):  The season series between the Frost Heaves and the Halifax Rainmen is tied at one game a piece, what will you guys need to do to prepare for this upcoming matchup?

Joe Salerno:  Obviously, when you play a team for a third time in a season, both teams are pretty familiar with each other. Understanding their strengths, and weaknesses is crucial. Halifax in my mind has the most talented back court in the league. You could have a month to prepare, and I still wouldn’t feel completely comfortable facing the Ervin, Bennett, Ferguson, and Gilchrese. But we will be ready to go. We will spend a lot of time in the film room this week, as well as putting in a couple of offensive wrinkles of our own.

Romy (Haligonia.ca):   What’s the attitude like in the locker room? Are they prepared to finish the season off strong and nab a playoff spot?

Joe Salerno:  I think our attitude as a team is right about where it should be. We are playing loose, and playing with confidence. Coming into this game with Halifax on a six-game winning streak is a great thing for us, yet at the same time we have been on the other end of the stick earlier in the season. We understand we still have our work cut out for us, and this will be a war on Friday night.

Romy (Haligonia.ca):  You came in to take over the head coaching duties partway through the season, how has your previous coaching background helped you to take on the Frost Heaves’ head coach role?

Joe Salerno:  Being promoted from first assistant to head coach three games into the season can be a challenge anywhere, and at any level. Being put in this position with the majority of my previous experience being at the high school varsity level, it was important for me to gain the confidence, and respect from the players immediately. I think I was able to do this, by just being myself, coaching with confidence, and backing it up with hard work. It is vital for players to see that their coach is working as hard, if not harder then they are. These are the same guidelines I tried to live by as a high school coach, and has carried over to be successful at this level as well.

Romy (Haligonia.ca):  Vermont has two players headed to this year’s 2010 all-star game (which will be played here in Halifax), Dwuan Rice and Ross DeMasi. For those who don’t know much about these guys, let’s hear your breakdown on the two guys’ games.

Joe Salerno:   I couldn’t be happier with the selections. I think our fans hit the nail right on the head when voting for Ross and Dwuan. They are great players, with even better attitudes, and work ethics you wish all your players had.

Dwuan is a one of those PG’s with sneaky quickness. He has great court awareness, and always seems to make the right decisions. He is a true “pass first” PG, who is always making players around him better. I believe he is second or third in the league in assists right now, a guy who will make some of the high flyers in the all-star game look pretty good!

Ross is the hardest working player I have seen in this league. From day one of this season he has been in the top 5 in the league in rebounding. Standing only 6’8″ and 215lbs, he fights for every rebound he gets. He is a tough defender in the post, with a nose for the basketball. He is one of those blue collar players, that has become a fan favorite. He is also the only native Vermonter who has ever started for the Frost Heaves in our 4 year history.

I am happy for both those guys, and think they are great selections.

Romy (Haligonia.ca):  Will you be making the trip to Halifax to watch the festivities?

Joe Salerno:  You know I was hoping to get an invite from Coach Berry to join his staff for the weekend… but the date does fall on my wife’s birthday, and we are actually expecting our first born the week before, so I may be a little busy. I’m not planning on making the trip….but I am still keeping my eye out for an invitation.

Romy (Haligonia.ca):   Last question, did you fill out a NCAA bracket this year? How does it look? Is it busted or is it still alive and well?

Joe Salerno:  I’m a Carolina guy, so it was tough for me to even look at a bracket with the Heels playing in the NIT. I did fill one out though, but believe me like many others this year, there’s not much to talk about! I’m rooting for Michigan State now, I’m a HUGE Izzo fan….Go Sparty!
__________

Thanks again to Joe for participating in our game preview, be sure to find out more about his Vermont Frost Heaves at their official website: VermontFrostHeaves.com

The Rainmen face off against the Vermont Frost Heaves on Friday night in Vermont (Gametime 8pm AST, 7pm EST).  Congrats to Joe and his Coach of the Month honours!