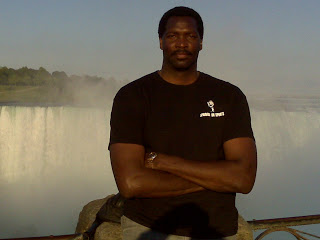 The 6-2 Halifax Rainmen face off against the 2-5 Buffalo Stampede this Sunday at the Halifax Metro Centre (Game time 2pm AST, watch it live here on Haligonia.ca!)  Buffalo is fresh off of a 114-111 win over the Manchester Millrats while the Rainmen are also off of a close victory, a three-point win against the defending champs,  Rochester Razorsharks.  Buffalo made their debut in the PBL last season and finishing with a 1-19 record.  This year, they look to make an improvement from last season but have a tough February schedule ahead of them with four of their five games on the road.
Roosevelt Bouie who is originally from New York,  is the GM of the Buffalo Stampede and was also a star centre for Syracuse from 1976 to 1980.  He had an outstanding career at Syracuse before continuing his professional basketball career overseas in Italy.   I had the chance to ask Roosevelt a few questions about the Stampede’s matchup with the Rainmen, his thoughts on Cameron Stanley and his thoughts on a famous Canadian basketball family.

Romy (Haligonia.ca):  For those who don’t much about Buffalo, who are some of the standouts on this team?

Roosevelt Bouie:  Some of our standout players this year have been: Derick Payne who is no longer with us, Andy Robinson, Markus Price, Kevin Ross and Greg Gamble have all done a great job growing into a team that has confidence when they take the court.

Romy (Haligonia.ca): What does Buffalo have to do to prepare for their matchup against the Rainmen?

Roosevelt Bouie:  That is a good try for a sneak preview, our roster is constantly changing in an attempt to field a confident team. The Rainmen are a very good team and we will have our hands full.

Romy (Haligonia.ca): You have back to back games in Canada, first Saturday in Quebec and then in Halifax on Sunday, what does the travel schedule look like for the team?

Roosevelt Bouie: There is always someone who gets a tough shake every now and then, it happened to me in every league and country. We try to worry about things we can control and travel schedule isn’t one of them.

Roosevelt Bouie: I am extremely focused on our team. At this present time he is on the opposing team. I do not wish to sound rude, this is developmental league basketball. There will be numerous players pass through the doors. As a player, I want them to do well.

Romy (Haligonia.ca): After your time in Syracuse, you went on to have a successful basketball career in Italy. What are your thoughts on how much the international game has grown, especially within the NBA?

Roosevelt Bouie:  The international game has come to the NBA in full force. One of the ways that I personally add value to playing for the Buffalo Stampede is by taking our team to tour Italy in June. I have booked tournaments for our players to be seen and invited GM’s, Coaches and Scouts to attend the games. I also send bio information to each of the interested parties so they can do their homework on each player arriving.

Romy (Haligonia.ca): You are a Syracuse alumni, what do you think about the Canadian kid at Syracuse, Andy Rautins? Did you ever work with his dad, the Canadian National team head coach Leo Rautins?

Roosevelt Bouie:  Leo and I are ex-teammates at Syracuse. It was his Red Shirt year so he did not play in the games, but he practiced with the team. Years later we met up again in Italy and played against one another for 4 years. We were united again in Spain, where we were teammates again. I have known Andy and all the Rautins boys for most of their lives, his oldest son was born in Rome. Since Syracuse we have met in Italy, Spain and Toronto. From time to time, I travel to Canada to work with some of their promising young big men. I have a room at their house in Syracuse.

Romy (Haligonia.ca): Do you ever break out the jersey and shorts and teach some of the players a thing or two?

Roosevelt Bouie:  I break them out from time to time to break a sweat. At that point, I get a few “How To..” requests from the post players.