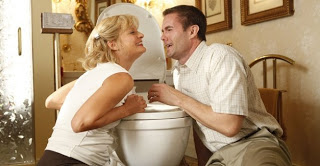 Last night’s episode of Raising Hope probably wasn’t my favorite of all time, but sitcoms can be very hit and miss. In “Sabrina Has Money”, I liked that Jimmy was able to offer up sage advice to Sabrina for once, but the stuff with Burt, Virginia and their fancy new toilet was, well, kind of crap.

I don’t like doing full reviews of Raising Hope, but here are my five favorite things from the episode:

I guess what really threw me off about this episode was that it came too close to changing who Sabrina is as a character. Her friendship with Jimmy is in tact and that rescued it, but I preferred to think of her as a snarky, smart middle class girl. (Hmm, perhaps because that sounds a tad familiar? I even worked in a grocery store during college.) The poor little rich girl thing wasn’t a very good color on her, even though they did their best to make it work.

Oh well, every show has a weak episode now and then – I still dig Raising Hope. Now give me some more scenes with Jimmy and Sabrina at the grocery store!