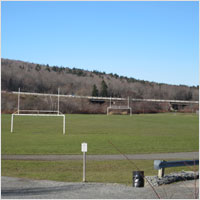 For almost 40 years Buddy Bremner has been among the hardest-working and most dedicated volunteers in Bedford. During that period he created and nurtured one of the most successful minor football programs in this province.

In the early 1970’s Bud decided to provide the boys of Bedford-Sackville with an opportunity to participate in tackle football, competing against other Halifax-area teams.

From humble beginnings at the Lions playground on Shore Drive where he first launched a peewee team, Bud took responsibility for all aspects of the program from coaching through fundraising.

Over that period, Bud developed a reputation for running well-organized, disciplined and successful football teams. More importantly he encouraged youth from all backgrounds to participate in a program that offered structure, physical challenge, leadership, and fun.

The kids he put through his program have all benefitted from that opportunity and carry strong memories of their experience well into adulthood.

Originally from Montreal, the Bremner family settled in Bedford following Bud’s retirement from the Canadian Navy in the 1960’s. Bud went on to a second career working with Farmer’s Dairy while he and his wife raised their three boys: Tony, Terry, and Timmy. He has maintained those roots and continues to live in the community that he helped to shape.

What is also extraordinary about Bud is his sheer longevity. While many parents volunteer in community programs for youth, athletic and otherwise, most tend to move on to other interests after their own children’s involvement has ended. Not so with Buddy.

Decades after his own three boys played, he is still going strong. Like a mark of the changing seasons, every autumn Buddy Bremner can be found at the field, back for another year of football with the kids.

The request to rename the sports field is based on Bud Bremner’s volunteer contribution to minor football for the last 40 years. As the founder of the local minor football program in Bedford, Bud Bremner has touched and continues to influence youth and parents though teaching of physical and mental fitness, socialization, responsibility and citizenship.

It is this community of present and former players and parents who have requested that the field be named after Mr. Bremner. In addition to an official request, a number of verbal stories were received by Councillor Tim Outhit and staff as to the impact of Mr. Bremner and his football program on youth of the area over the last four decades.

Halifax Regional Municipality supports commemorating individuals who have contributed to the community or to society in general. These individuals have normally contributed from a military, heritage or community perspective.

Since amalgamation, HRM has recognized a number of these individuals by naming new streets, renaming existing streets, and naming municipal parks or the facilities within parks. HRM also recognizes the contributions of groups, such as veterans, immigrants or cultures, who have contributed to the community.