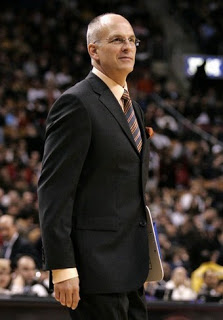 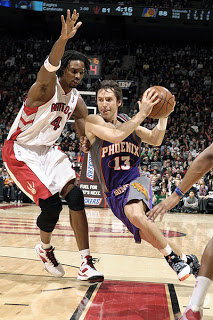 Raptors Backcourt Scores 48 Points! Raptors Lose.
Jay Triano took a gamble on sunday and started Anthony Parker and Joey Graham in the backcourt vs the Phoenix Suns. The result; 48 points! Throw in Jamario Moon’s 16 and you have 64 points from the Guard/Forward spot, considered to be the Raps glaring weakness.
That’s the good news. The bad news? The Raptors still lost, 117-113. Their 5th in a row if you’re counting.
Bargnani and Bosh contributed 35 points on 50 % shooting. So how can the Raptors still come out on the losing end, when five players score in double figures? I guess you would have to ask Jack Armstrong and Leo Rautins (a very nice man by the way. I sent him an e-mail over the summer asking if he would be interested in an interview for a book I was considering writing on canadian coaches. Not only did he write back saying he would, he gave me tips on how to get started and a list of coaches I should interview).
But in my humble opinion, asides from the Raptors inability to defend and their lack of athleticism at the guard and forward spots, the following changes need to be made;

The Jay Triano experiment needs to come to an end. It was a bold move by Colangelo and we all want to see Triano succeed, but the team is playing worse than ever. The one positive of Triano’s tenure is that Bargnani has thrived. But is that because of Triano`s presence as Head Coach, or because Sam Mitchell isn’t there anymore?
Avery Johnson would be a perfect fit for this team. Or any of the older coaches who always seem available to try and settle a team down and get them to play technically sound bball would do, i.e Mike Fratello, Hubie Brown, or Jeff Van Gundy.

Jermaine O`Neal must go, while all the shop talk is still hot and teams are desiring his services. I read this morning that the Lakers are interested in shipping Lamar Odom for O`Neal, and there have been rumours of a Shawn Marion deal involving the Heat. Marion would be the ideal candidate. He would bring an automatic upgade in athleticism and he has a good history with Brian Colangelo from their days in Phoenix.

Finally, the Raptors have too many guys who are just good enough to get you beat. Jamario Moon, Graham, Parker, Chris Humphries. These players will do lots of nice things during a game, but in the end you still lose.
The problem with these players is that they are MEDIOCRE. So painfully average. Not too beat a dead horse, but their lack of athleticism kills the Raps. This was obvious during yesterday`s game vs Phoenix. Amare Stoudamire, Leandro Barbosa, Matt Barnes, Jason Richardson, even Grant Hill. These guys can run and jump all day long, and Steve Nash is the perfect QB for this group of thoroughbreds. Imagine Jose Calderon with that bunch, the Raptors would be serious contenders.

Raptors Lose 6th Straight
We all know Jamario Moon can’t guard a chair, well today in Atlanta, Chris Bosh had enough. Bosh walked over to Moon in the second half and began yelling at him right on the floor. It looked like Bosh was attempting to show Moon how to position himself correctly defending the ball on the perimeter.
How did Moon respond? On the next play he left his feet on a Mike Bibby upfake, and fouled him as Bibby tried to shoot over the helpless defender.
So Jamario decided to make amends on the offensive end. With the Raptors trailing by 1 point, Bosh was stripped on a drive to the basket with 1 minute left. The Hawks decided to go for the score rather than hold for a good shot and ended up getting a ridiculous looking spinning layup that hit the bottom of the basket, bouncing down into Raptors hands. The ball made it’s way to Moon, who, for reasons unknown to anyone in the building, fired up a three pointer with 20 seconds left on the shot clock, 31 left in the game. Brick.
The Hawks rebounded, hit a jumper on the offensive end, game over. Thanks Jamario.
Any chance another team will take this guy off the Raptor’s hands, maybe as a throw in with Jermaine O’Neal.
As I wrote earlier, the Raptors play just well enough to lose. Time to make some changes. Despite all this losing, the Raps are still just a few games out of a playoff spot, with half a seson left to play.

Triano’s Record Not Too Good

Now that the Jay Triano honeymoon is officially over, it’s time to objectively look at how Triano has fared as Head Coach. The record: 8 wins….18 losses. The Raps have had injuries, but they had injuries with Sam Mitchell, and they were 8-9 under him. The Raptors have played tough teams…yes. But they are 2-12 vs teams with records over .500. 2 wins! That means they are 6-6 vs teams below .500, and some of those losses were awful. They’ve lost games to the Pacers, Warriors, Kings, and Oklahoma City! The Thunder for god’s sake!
The Raps next 2 games are at Detroit and Chicago. Think they’ll get one of those? Maybe the Bulls.
Then they start February with 4 straight vs. the Magic, Cavaliers, Lakers, and Hornets. Those 4 teams are a combined 120 – 36!! That could be the stretch that puts the Raptors away for good.
Getting back to Triano, it’s just not happening. Time for a change at the Head Coach position, packaged with some player movement, to try and salvage a horrible season.

The Curious Case of Chris Bosh
Is it just me or does Chris Bosh seem to be aging right before our eyes. He looks like he is in peak shape, but he seems to labour up and down the floor, doesn’t seem to jump as high, and has lost alot of quickness. He has really bulked up since his rookie season but you have to wonder if it has slowed him down.

Damian Cox on The Reporters
Damian Cox of the Toronto Star made a great point on sunday morning’s “The Reporters” on TSN. Referring to that evening’s AFC championship between the Ravens and Steelers, Cox said that tonight we’ll be watching an absolutely violent football game…and there will not be one fight. So why is there fighting in hockey?
An excellent question.
If a couple of guys had dropped the helmets, would that have prevented Willie Mcgahee’s injury in the 4th quarter? No.
At no point did I hear one of the guys in the studio at halftime say, ” The game is getting a little chippy out there, we need a good scrap to keep guys honest.”
No other sport in the world, with the exception of Rugby, makes NHL hockey look so silly.