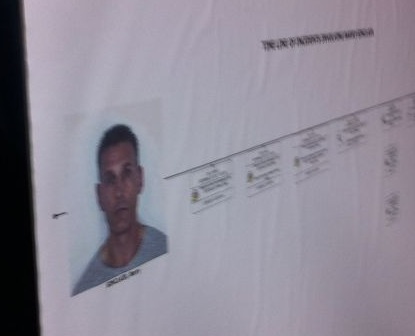 Police have laid charges against Barry Sinclair in connection with a recent investigation into two break and enters and three pictures of women that were released on September 29, 2011.  Raw video of the press conference below with Police Chief Frank Beazley's speaking notes.

Chief Beazley’s Speaking Notes
Over the last few years police have been investigating a series of break and enters in the south end of the city. A trend was noted that suggested that at least some of these cases may be connected. Over the years there has been an active investigation ongoing that has utilized significant resources. Members of the HRP Forensic Identification Section, Quick Response Units and Patrol as well as Investigators from the Integrated General Investigative Section and Integrated Major Crime Unit have all contributed to this investigation. The investigation involved a number of appeals to the public, including the release of various composite sketches of potential suspects. It also included the unprecedented step of releasing images of women in an attempt to identify them and determine the circumstances under which their images were captured.
In the fall of last year, police arrested a man in relation to a break and enter in the south end of Halifax. The resulting investigation has led to the charges I’m announcing today. Forty-nine-year-old Barry Edward Sinclair of Dartmouth faces five counts of voyeurism and two counts of break and enter. Mr. Sinclair appeared in Halifax Provincial Court this morning.
The charges come as a result of two break and enters that took place on September 15, 2011. The first incident occurred at 5:51 a.m. on South Street after a woman woke up and found a man watching her. As a result of the description provided and with assistance from a member of the public, responding officers located Mr. Sinclair a short distance away in the area of Robie and South Streets. He was questioned in relation to the break and enter but was released without charges. The second break actually occurred at 4:30 a.m. in the 6200 block of Shirley Street but it was reported later that day. It wasn’t until the following month that it was connected to the South Street incident.
After Mr. Sinclair was released on September 16, officers with the Central Quick Response unit were tasked with monitoring him.  On September 17, 2011 at approximately 4:10 a.m. they observed him go behind a residence located in the 1300 block of Birmingham Street.  He was located on a back deck near a window where he was arrested and subsequently charged with trespass by night and resisting arrest.
On September 18, 2011, a search warrant was executed at Mr. Sinclair’s residence and investigators seized drugs as well as other evidence. Drug charges were laid against him at that time. On September 29, we issued a media release containing images of four women in an attempt to identify them. We believed that the images were captured without the women’s knowledge. Three of the women have been identified and have fully cooperated with our investigators.
Three of the voyeurism charges laid against Mr. Sinclair today are as a result of these women coming forward and providing assistance to police. We thank these women for their cooperation. The other two voyeurism charges are connected directly to the two break and enter charges.
There is insufficient evidence to suggest that all of the reported break and enter incidents are connected to one perpetrator. In many cases, victims were often unable to provide a description of the suspect which requires investigators to consider the possibility that there may be more than one person responsible. For that reason we continue to encourage residents not only in the south end, but across HRM, to be vigilant with keeping their doors and windows secure. We also ask people not to share keys or place spare keys outside their homes.
In closing, I want to thank all the officers who worked on these files, but I want to especially acknowledge Detective Constable Kim Robinson who has been the lead investigator on this matter since 2008. It’s her perseverance and dedication on these investigations that has led to these charges. I also want to acknowledge the assistance of the public without which these charges wouldn’t have been possible.