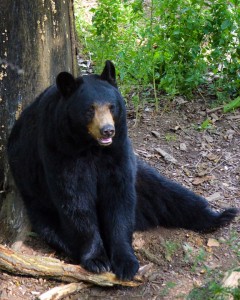 .As bears come out of hibernation searching for food, Nova Scotia RCMP is asking motorists to watch for the animals on roadways. Police are also reminding residents to reduce food smells that attract bears.

On June 15 at approximately 10 p.m., a Westville man suffered minor injuries after his vehicle collided with an estimated 350-pound adult black bear on Highway 6 in Three Brooks, Pictou County. RCMP, EHS and Caribou District Fire Department responded to the scene. The bear had been rummaging through green bins near the roadside before the collision. It was found nearby suffering from its injuries and was put down.

Motorists are reminded to watch for bears on roadways. Residents should follow the steps below to reduce food smells and keep bears away from their properties and surrounding roads:

·       Store garbage, compost and recycling in containers that have tight-fitting lids and can be secured or locked.

·       Do not leave garbage, compost or recycling outside overnight. Instead, put it outside on the morning of its scheduled pickup.

·       Clean barbecues often and cover them when they’re not in use.

·       If you have fruit trees, pick fruit as soon as it ripens and remove fallen fruit from the ground.