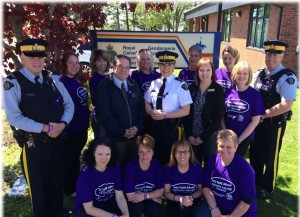 WEAAD is marked each year on June 15 and is an official United Nations International Day acknowledging the significance of elder abuse as a public health and human rights issue. WEAAD also serves as a call-to-action for individuals, organizations, and communities to raise awareness about elder abuse, neglect, and exploitation. This year, police officers, Senior Safety Coordinators and local community leaders will be wearing purple ribbons and t-shirts help raise awareness of senior abuse.

The terms ‘elder abuse’ or ‘senior abuse’ are often used interchangeably to describe the experience of older adults who are abused, usually by someone they know and trust. Senior abuse is officially defined as a single or repeated act, or lack of appropriate action, occurring within any relationship where there is an expectation of trust which causes harm or distress to an older person. It can include various forms, such as physical, sexual, financial, psychological or emotional abuse. It can be the result of intentional or unintentional neglect, and in many situations the seniors often don’t recognize or define the situation they are experiencing as abusive.

On June 15, information booths about Senior Safety Programs and senior abuse will be hosted at RBC branches in Kings, Annapolis, Digby, Yarmouth, Shelburne, Queens and Lunenburg Counties, as well as in West Hants. Stop by your local RBC branch in those areas to learn more.