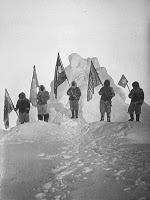 Read Your Way Around the World invites you to the North Pole – but good luck getting there! It’s not impossible, of course, if you are in great physical condition, can endure cold weather camping, and have tens of thousands of dollars to spare. An increased interest in adventure tourism and a concern for the diminishing of the polar ice caps have been drawing intrepid travelers in recent years. Apparently, reaching the North Pole by parachute is as viable a way as skis and dog teams. Anyway …. for the rest of us, thankfully, there are plenty of books through which we can imaginatively experience those early attempts to the North Pole from the comfort, safety and warmth of our homes. And, of course, a couple from alleged residents which give insight into local cuisine and a peep into, perhaps, the shadier side of life at the North Pole.
The Fat Man: a tale of North Pole noir (M)
by Keith Harmon

“A hardboiled elf is framed for murder in a North Pole world that plays reindeer games for keeps, and where favorite holiday characters live complex lives beyond December. Fired from his longtime job as captain of the Coal Patrol, two-foot-three inch 1,300-year-old elf Gumdrop Coal is angry. He’s one of Santa’s original elves, inspired by the fat man’s vision to bring joy to children on that one special day each year. But somewhere along the way things went sour for Gumdrop. … Justice is the only thing he knows, and so he decides to give a serious wakeup call to parents who can’t keep their vile offspring from landing on the Naughty List. But when one parent winds up dead, his eye shot out with a Red Ryder Carbine-Action Two-Hundred-Shot Range Model BB gun, Gumdrop Coal must learn who framed him and why. ” Discover
North Pole Tenderfoot: 18 dogs, 62 below, 200 miles: a rookie’s adventures and misadventures traveling in Admiral Peary’s footsteps (M)
by Doug Hall

“Why would Doug Hall follow in Robert Peary’s 1909 sled tracks to the North Pole, despite the grueling terrain and temperatures between 15 and 62 degrees below zero? His goal was to resurrect the spirit of Peary’s journey in a world increasingly driven by instant gratification, short term business focus, and lack of sustained dedication to great causes. Peary succeeded where some 578 expeditions before him had failed. North Pole Tenderfoot is Doug’s attempt to let the reader experience what is possible when one does what Peary did: think big.” publisher
To the End of the Earth: our epic journey to the North Pole and the legend of Peary and Henson (M)
by Tom Avery

“Did U.S. Naval Commander Robert Peary and his team dogsled to the North Pole in thirty-seven days in 1909? Or, as has been challenged, was this speed impossible, and was he a cheat? In 2005, polar explorer Tom Avery and his team set out to re-create Peary’s one-hundred-year-old journey, using the same equipment, to show that Peary’s team could have done what they had always claimed and discovered the North Pole. Navigating treacherous pressure ridges, deadly channels of open water, bitterly cold temperatures, and traveling in a similar style to Peary and Henson with dog teams and replica wooden sledges bound together with cord, Avery tells the story of how his team covered 413 nautical miles to the North Pole in thirty-six days and twenty-two hours—some four hours faster than the original pioneers.” publisher
Santa’s North Pole Cookbook: classic Christmas recipes from Saint Nicholas himself (M)
as told to Jeff Guinn 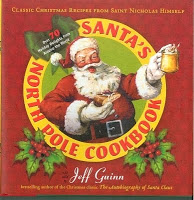 “In this one-of-a-kind Christmas cookbook, Saint Nicholas himself invites readers to pull up their chairs to his dining table at the North Pole and enjoy a bounty of his most cherished holiday recipes. Featuring classic American holiday dishes as well as mouthwatering Christmas fare from all over the world-Santa’s favorite finds from his extensive travels- Santa’s North Pole Cookbook offers an abundance of holiday meals that are as delicious as they are rich in Christmas tradition. … Santa also tells the fascinating lore of the celebration of the winter solstice and the festivities of Christmas, sharing with readers the wonderful stories about how and where he personally encountered these toothsome delicacies in his yuletide travels.” Discover

“Heighton revisits the catastrophe of the 1871 Polaris expedition, in which 19 members of the crew were cast adrift on the ice off the coast of Greenland. Using the historical record to ground his fictional recounting of what happened once these men, women, and children were accidentally separated from the ship, he then allows his imagination to supply the stories behind the tension that drove the small group apart. Heighton also follows the lives of three of the survivors after their rescue, showing how easily memories can become flawed in the light of public approval and how casually events can be interpreted in many different ways.” Booklist
Prisoners of the North (M)
by Pierre Berton

“The five “prisoners” of the Arctic were Joe Boyle, Vihjalmur Stefansson, Lady Jane Franklin, John Hornby, and Robert Service. Boyle was a wealthy gold prospector, Stefansson claimed to discover a tribe of blond Eskimos, and Franklin was the widow of the famed explorer Sir John Franklin. Hornby’s obsessive quest for adventure took him to the Arctic’s Barren Ground, and Service was the poet who found refuge in the frozen North. Berton tells their stories in this, his fiftieth, book. He points out that the five diverse characters, all loners, were rugged individualists–impatient of authority, restless, energetic, and ambitious–and driven by wanderlust. Boyle worked his way on foot through the mountains in perilous weather, Stefansson traveled thousands of miles behind a dog team, and Franklin climbed the most precipitous mountains searching for her missing husband. Hornby trudged across the Arctic on foot, and Service struggled sometimes as much as 12 hours a day up the Rat River. Their adventures read like the wildest fiction.” Booklist
The Navigator of New York (M)
by Wayne Johnston

“The Navigator of New York is set against the background of the tumultuous rivalry between Lieutenant Peary and Dr. Cook to get to the North Pole at the beginning of the 20th century. It is also the story of a young man’s quest for his origins, from St. John’s, Newfoundland, to the bustling streets of New York, and the remotest regions of the Arctic…Wayne Johnston has harnessed the scope, energy and inventiveness of the nineteenth century novel and encapsulated it in the haunting and eloquent voice of his hero. His descriptions of place, whether of the frozen Arctic wastes or the superabundant and teeming New York, have extraordinary physicality and conviction, recreating a time when the wide world seemed to be there for the taking. An extraordinary achievement that seamlessly weaves fact and fabrication, it continues the masterful reinvention of the historical novel Wayne Johnston began with The Colony of Unrequited Dreams.” publisher

Read Your Way Around the World - North Pole
https://haligonia.ca/read-your-way-around-the-world-north-pole-51072/