Read Your Way Around the World invites you to Tanzania.

One of Tanzania’s most famous novelists is Abdulrazak Gurnah whose novel Paradise (M), published in 1994, was shortlisted for both the Booker Prize and the Whitbread Prize.

His more recent book Desertion (M) is set on the island of Zanzibar in the years following the transition from colonialism to independence.

The Guardian described Desertion as      “beautifully written and pleasurable as anything I’ve read recently, a sweetly nostalgic recall of a colonial childhood and a vanished Muslim culture, defined by its thoughtful and customary manners, layered by its calendar of festivals and religious observances. At the same time each of its virtues are parallelled and offset by the petty cruelties of a small, incestuous community. Gurnah’s portrait of the society’s complexities is the work of a maestro.”

The Serengeti, located in northern Tanzania, is counted amongst the ten natural wonders of the world. In Serengeti Story: life and science in the world’s greatest wildlife region (M) by Anthony R.E. Sinclair you can read about Sinclair’s decades long study of the plain and ponders the question of how to ensure that places like this are viable in the face of human intrusion.

“Serengeti is arguably the most well-known and highly treasured conservation area in the world. In 1972 the United Nations meeting on National Parks and Protected Areas agreed to set up World Heritage Sites, now supervised by UNESCO, and at that meeting they voted Serengeti top of the list. What makes this site outstanding? What happens in Serengeti biologically? How did it become a protected area? What are the historical events that have shaped its present dynamics? What will happen to itin future? How has it become relevant to human society and conservation? These are the questions that Anthony Sinclair answers.” publisher

If you have wept while watching the Youtube video featuring Christian the lion’s reunion with Anthony Bourke and John Rendall you will probably appreciate Born Wild: the extraordinary story of one man’s passion for lions and for Africa (M) by Tony Fitzjohn. Fitzjohn dedicated his life to working with lions in Kenya with George Adamson (Born Free) reintroducing lions into the wild. He was forced from Kenya to Tanzania when no longer welcome in Kenya. 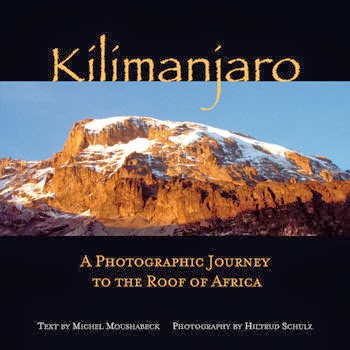 Mount Kilimanjaro, located in Tanzania, is the highest mountain in Africa. This volcano attracts more climbers than Everest and has claimed more than its share of victims. Perhaps the majority of us should best appreciate its wonders through books like Kilimanjaro: a photographic journey to the roof of Africa (M) by Michel Moushabeck. Ernest Hemingway immortalized the mountain in a short story The Snows of Kilimanjaro (M) in which a writer on safari in Africa contemplates his life as he lays dying from an infected wound.

Finally I’ll end with Canada’s MG. Vassanji who was raised in Tanzania and is a two time Giller Prize winner. In his short story collection Uhuru Street: short stories (M) “…stunning book of linked stories, set within the Asian community of Dar es Salaam. With delicate strokes, and with irony and humour, Vassanji brings alive the characters who live and work in the shops and tenements of Uhuru Street; among them: Roshan Mattress, so called because of her free and easy ways; a street-wise orphan fighting for survival; a Goan dressmaker who entertains her employers with local gossip; and a servant who opens up the world for the children in his charge, until he oversteps his bounds and has to leave. As the younger generation searches for a new destiny, and the older fiercely holds on to the past, Uhuru Street resonates with the moment of moving on, of leaving the place where we have roots, knowing that things will never be the same.” publisher

Read Your Way Around the World - Tanzania
https://haligonia.ca/read-your-way-around-the-world-tanzania-87667/