A couple wkds ago I had tkts to see the Matt Mays show at the Seahorse. Since the show didn’t start until 10:30 (more like 11:30), my friend and I decided to get some brews beforehand. But we didn’t get just any beer- I was told that I “had to” try the ‘Iceberg’, a specialty beer served at the Red Stag Tavern in the Brewery Market.
This is, as I was told, a tasty concoction. A pint of Keith’s with…wait for it… a frozen margarita topper! I don’t know who came up with this combo, but they deserve a medal, or a cookie, or something. The combo of lime and beer was somewhat reminiscent of a jumbo Corona. Unfortunately, it was pretty cloudy, but I’m sure I’ll be consuming these on a regular basis on the Red Stag’s patio this summer.
Every time a sip of beer passes my lips, it’s like a craving catalyst. I try to resist it, but rarely succeed. As soon as that icy cold ale filled my mouth, I wanted something salty to snack on, so we got an order of nachos w/ chicken.
This is a huge amount of food for two people. With two small chicks chowing down, we were full in a minute, but found it hard to resist the salty chips, cool sour cream, spicy peppers and gooey cheese. These nachos are a little different too- they verge slightly on the side of an Italian-style nacho dish with caramelized onions and an anise-flavored basil oil.
Cajun chicken w/ bell & banana peppers, caramelized onions, tomatoes, mixed cheeses
& a drizzling of basil oil 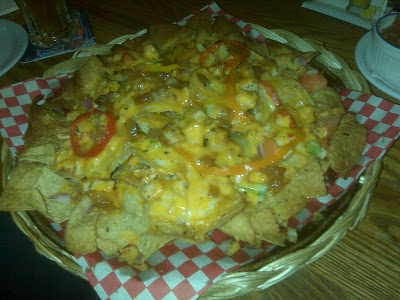 These nachos were just the thing to accompany our tasty brews, fill my belly up, and give me the energy for the night of fun-filled entertainment that was to come!

The Red Stag also has a bunch of ‘Special Nights’ to get good deals on food and drinks. Here is a list of specials served up each night from 4:00pm – 10:00pm: