There are probably few who need to be reminded that today is the 10th anniversary of the September 11th terrorist attacks in the United States. In the decade since 9/11, much has been written about the attacks, why they happened, what they meant to America and the world and how the world changed afterward.

As a blog about reading, it seemed fitting on this anniversary to look at how the September 11th attacks have been portrayed in fiction, and we are certainly not alone in our decision to do so. Numerous newspaper, magazine and blog stories that have examined the impact of September 11th through fiction and asked which novels have best addressed it. Most people agree that the idea of the definitive 9/11 novel is overly simplistic, but there are a number of books that are frequently mentioned as having captured the emotion of the event and its aftermath. Among those are:

Oskar Schell is 9 years old and lives in New York. He is clever and quirky, very smart, a little bit nerdy, very precocious: he also lost his father in the September 11th terrorist attacks. Having found a mysterious key amongst his father’s things, he goes on a great adventure to try to find the lock that it fits. The story takes the reader across New York and examines the question of loss through the eyes of both the very young and the very old. It is a story that is by times simple and complex, beautiful and horrifying, although some have criticized it as too precious.

A book that in many senses isn’t a 9/11 novel: the publisher’s description of The Emperor’s Children doesn’t even mention September 11th, but the setting and time frame (New York City, 2001) place it firmly in the reader’s mind even before the date arrives in the story line. From The Observer: “A group of New Yorkers hovering around the awkward age of 30, privileged, bonded by lengthy friendship despite mutual irritations and bewilderments, they are ready to make their mark; but to what extent their ambitions are feasible, desirable or even justifiable is a question that quietly resonates as the story meanders through 2001 up to, and just beyond, the moment that the aeroplanes start to hit the World Trade Centre and render it almost obscene in its vapidity and irrelevance.”

Winner of the PEN/Faulker award, it seems improbable to me that there is a critically acclaimed book with the dual focus of cricket and September 11th, but that improbability makes it no less true. Hans van den Broek is left alone in New York following the 9/11 attacks, when his wife returns to Europe with their son. In the New York Times, it was described as a post 9/11 novel that “provides a resonant meditation on the American Dream.” It is frequently compared to a New York novel of another era: F. Scott Fitzgerald’s The Great Gatsby. 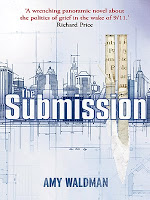 Although the author herself has said that she didn’t think of her book as a 9/11 novel, there is obviously a direct link. The Submission is the story of a blind contest to pick a design for a memorial at Ground Zero in New York, and the fallout when the artist who is selected happens to be Muslim. Waldman has said the idea for this novel was found in the controversy over another American memorial: “I was having a conversation with a friend about the Vietnam Memorial and [its designer] Maya Lin …There were many aspects to that controversy, but one was [Lin] being Asian-American, and Vietnam being an Asian war. I started thinking, ‘What would be the parallel now, with 9/11?’ ” Only a month since its release, time will tell if this novel will become part of the canonized literary record of September 11th.

If you are interested in the topic of 9/11 novels, here is a list of further articles, published at various times in the last 10 years.