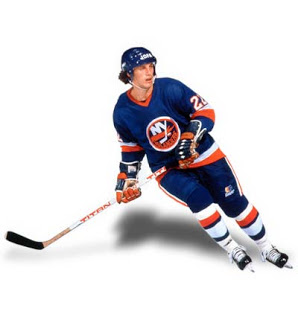 I was recently asked which athlete or former athlete I would interview if I was given the choice. The answer came easy to me; Michael Bossy.
Mike Bosy won 4 stanley cups. He once scored 50 goals in 50 games. He scored over 50 goals every year of his career accept his last. He scored over 60 goals 5 times! Due to chronic back pain, he had to retire a young man in 1987 after only 10 years in the league.
Mike Bossy was my idol growing up in New Brunswick. When Bossy would take the ice during the New York Islanders cup run in the early eighties, I would jump off the couch and stand in front of the Television with hands on knees like a focused football coach. The only stick I would use was the Titan with Mike Bossy’s signature, while every other kid used the Wayne Gretzky model. I even insisted playing right wing, even though I was a left hand shot, because Mike Bossy was a right winger.
I’d love to find out if Mike Bossy is bitter for having his career cut short due to back injuries, incurred by taking so many cheap shots from defencemen in front of the net. A multiple Lady Byng Trophy winner, I want to find out what his thoughts are on fighting in the game of hockey, especially with the death of Don Sanderson and the increased debate on the role of fighting in hockey this year. I would ask him his philosophy on goal scoring. Bossy was one of the greatest snipers in the history of the game, but I don’t think anyone has ever asked him what made him such a great scorer.
Finally, I want to know if he has ever struggled since retiring in the late eighties. He currently has a job in the front office with the Islanders, but for years prior, the Boss was left to his own devices. I remember seeing an interview with him one time where he was a representative for a potato chip company in Quebec. There was the Hall of Famer, stacking chip shelves in a Quebec corner store. I want to know if he is resentful for the game turning its back on him, after forcing him to retire far too soon.
Bossy was a gentleman, and the most feared pure sniper of his era. A stanley cup champion who was taken from the game far before his time.
So here’s to the Boss. We haven;t seen a goal scorer like him since his retirement, and we may never.