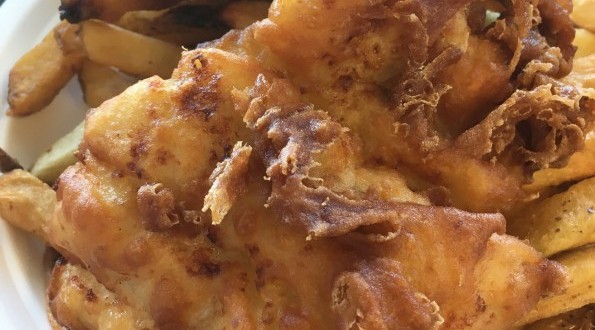 So the start of #ReTalesMadness was 32 local restaurants I have never eaten at before, often it was a matter of geography that had kept me away. So I took all 32 and threw them in a random seed generator and came up with a playdown bracket. If I knew then what I knew now, I would have seeded them by hand.
You can see the whole bracket here http://challonge.com/ReTales.

Then I visited the Final 4

Fredie’s: 2 Piece Fish and Chips
This was easily the best battered fish I have had in a long time, all crispy and fresh fish. $9.99. The service was awesome, you order at the counter, but they bring your meal to your seat, and all the staff was cheery and welcoming.
Verdict: I will be back but next time I’m exploring scallops, clams, and Newfie fries.

Chef’s Menu: Bruschetta Burger $14
The Burger was good, but the star of this show was the garlic fries.
The service could have been better a bit of a gap from being seated to being acknowledged by the wait staff, and I wasn’t checked on during my meal (water wasn’t refilled), and the offer of a bill was a while after clearing my plate.
Verdict: I may go back if I were in Sackville and someone said where should we eat, I may suggest it but not enough to draw me out from the city.

Redwood Grill: Voodoo Chicken Sandwich w/substitute spinach salad $16
The sandwich was good, the chicken was nice and moist, the spinach salad wasn’t right the poppy seed dressing was pre-dressed on spinach and carrots, and then other things just dropped on top.  The carrots threw off the delicateness of a spinach salad, and I missed the egg. The service here was terrible, 5 minutes to be seated, 10 minutes before menus and an offer of the drink, another 10 minutes before order taken, the food then did come in a reasonable time but the bill did not.
Verdict: Nothing special, no reason to go back.

Le Bistro by Liz: Pot-Au-Feu $15.95
A glorified Ceasar Salad and glorious it was, the shrimp, scallops, and chicken were cooked perfectly, and a the salad was a damn good Caesar Salad. The service here was exceptional from the moment you walk in the door. I watched the servers, and they did not miss a beat at any table.
Verdict: I’ll be back for sure. Next time I’m going for brunch

The other observation I can make is that Asian restaurants seemed to be knocked off by places that serve fries. I have also since tried I Love Pho which was good but I like Hoang Minh better, and Mongolie Grill, which I do not get the fascination with even in the slightest. I also plan to eat at Beaver Sailor, ASAP and Epicurious Morsels in the near future.