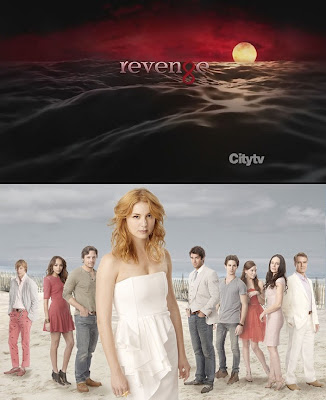 Last night I watched the first four episodes of Revenge. Y’all are right, it’s amazing. Now before you launch a parade of “I told you so!”, know that I never doubted your judgment. I always believed that it was good, but it’s so damn hard to catch up on a show! I missed the boat on watching this one from the start (as discussed before, I made the wrong choice and watched Ringer instead) and never had the time (there’s so much TV on all of the time!) to catch up.

So, yes, I love this show. The best part? It has a total Veronica Mars-ey feel to it. A strong, bad-ass female lead who’s seeking revenge on rich bitches? Suspense and anxiousness to find out what happens next? Yes. Please. It’s campy and fun and the sucks you in almost immediately.

If you’ve yet to see it, here’s the gist: Emily Thorne moves into a beach house in the Hamptons where she’d stayed as a kid, back when she went by her real name Amanda Clarke. Her father’s life and her childhood were ruined when the people her father worked with framed him for a terrible event. Now she’s all grown up and ready to ruin their lives, one by one.

I’m only four episodes in and so far the show has done a great job of slowly revealing Emily’s past through flashbacks – another way this show is reminiscent of Veronica Mars. The plot is juicy and the show is dark without losing a sense of fun – it nails the tone that Ringer needed and failed to achieve. The characters are strong, and you’re constantly reassessing your opinions of them as you learn more about them.

You’ll love Emily. She’s feisty, determined and filled with vengeance (just like a certain resident of Neptune, California we all know and love) but she knows how to play the polite, globetrotting debutante perfectly. Then there’s my other favorite character, Nolan – a filthy rich computer genius who forces his help upon Emily. And there’s the Grayson family, the people who ruined Emily’s dad’s life. You’re often unsure of who’s good and bad – Emily strikes up a relationship with Daniel Grayson (the result of which we see within minutes of the first episode) who I originally think is a good guy. A few episodes later, I’m not so sure.

Seriously you guys, it’s so great. OK it’s not The Wire great, but it’s great. The Veronica Mars comparisons are plentiful, so if you miss that show as much as I do I highly recommend you check it out.