No, literally. I’ve had it with all this holy crap. Stop making decisions based on what you think God wants, Survivor players! This is a game for strategy! I’m sick of seeing a bunch of people praying instead of actually thinking about how to win the game – I feel like my favorite reality television show has been taken over by a cult of religious zealots over the past few seasons, and I want it back!

That said, I can only assume the fact that Coach prayed and then did not vote out Sophie means that, obviously, God wants me to win the Survivor office pool this year. Thanks for having my back, God. Should I light a candle in church on Sunday just to seal the deal? I could really use that prize money. OK thanks.

After weeks and weeks of safe game play, on last night’s penultimate episode of Survivor we finally got to watch the Upolu core five go all Hannibal Lector on each other – and was it ever exciting.

Having voted out Edna, everyone at the Upolu camp had their minds clearly focused on who they wanted to take to the final three – except Brandon, who just wants to thank the person who’s gotten them to this point. Who? His initials are J.C.! Brandon thinks it’s Jesus, but it’s actually John Cochran – odds are none of them would be there without him.

Sophie was eying Coach and Albert, but Albert was starting to feel threatened by Sophie and wanted her out. He solidifies his final three deal with Rick, the silent mustached one. I can’t imagine not wanting to go with the finals – Albert was completely right when he admitted that although he doesn’t really like Rick, he’s a great person to sit next to in the end because no one else does either. Albert also has a final three deal with Brandon though, which means he has final three deals with…everyone. That can only end in hurt feelings!

I find it fascinating that no one is considering Coach a threat. Is the Dragon Slayer a shoe-in to win at this point? It looks like everyone wants to sit next to him at the end, but I really think he has a good chance of winning. He orchestrated a rock solid alliance, he convinced Cochran to flip which gave his tribe the majority after the merge, and he dominated his way to the end. People could respect that. I can’t believe a savvy player like Sophie, or even Albert, would let Coach Boston Rob his way to a million bucks. 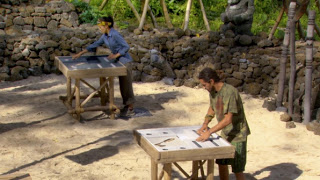 Duel time! It’s Ozzy vs. Edna, and whoever wins will move on to the final duel. It was pretty obvious Ozzy would win – the editing of the preview they gave us last week made it look like Edna would win, so I knew she wouldn’t. Still, it was surprising since the challenge consisted of two puzzles – if there was a challenge Edna would have stood a chance in, it was that one.

Ozzy completed the first sliding puzzle far ahead of Edna, even though she was receiving help from all her old tribe mates. The sliding puzzle released a hatchet, which they had to use to release colored blocks for the second puzzle. Edna began to catch up in the second puzzle (again, with a tremendous amount of advice from the peanut gallery) and almost had it, but there was an error. Ozzy won, again.

Ozzy only needs to win one more duel to reenter the game, but Brandon will certainly provide some stiffer competition than the likes of Edna or Cochran. Plus I hear he has some dude named Jesus helping him out. At this point, I’m not sure how it will go. On the one hand, it feels like the narrative has been set up for Ozzy to find “redemption” and reenter the game, possibly making it to the finals by winning the last couple Immunity challenges – and, thus, the game. I’m quite sure that if Ozzy makes it to the end, he’ll win. That seemed like the narrative they were going for and if he were facing, say, Rick in the finals, I’d be sure of his victory. Rick has not gotten the edit of someone who comes back into the game. But Brandon? Brandon has also gotten a “redemption” friendly edit, and frankly I’d love to see him come back into the game after being betrayed by Coach. I’m not an Ozzy fan and don’t want to see him win the game, so I’m surprising myself by rooting for Brandon in the next duel. I never thought I’d say that.

Everyone’s Got a Different Plan

Back at camp, Sophie vocalizes a few things that people should have been saying all along. Like what a threat Ozzy is – as she points out (and as viewers have been saying all season), thanks to Redemption Island if Ozzy makes it to the final three he’ll win hands down. He hangs out on that “island” not backstabbing anyone, catching them fish and commiserating with them about how mean everyone else is. It’s “Ozzy’s Pleasure Dome”, as Sophie put it. She wants to send Brandon to face off against him because she considers him the next biggest threat – I don’t know if Brandon is as big a threat as I think Coach is, but I do think Sophie made some excellent points. Brandon is a loose cannon, but he’s also played an honest game. People could throw votes his way merely because he’s the only person sitting in the final three who didn’t lie to him. Rick is also on board with giving Brandon the boot.

Hilarity occurs when Brandon wanders up to Coach and he’s talking to Albert about their final three plans. He didn’t seem aggressive at all when he asked what they were talking about, but Coach’s Russell Hantz induced PTSD suddenly kicked in and he accused Brandon of bullying them. What? Next thing I know Brandon is asking Coach to hug it out and offering him a piece of coconut.

So much confusion and confrontation! I love it.

Pizza Party With A Side of Truth Bombs 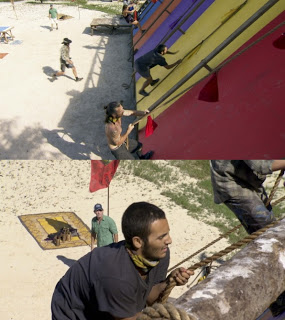 Immunity Challenge time! I was seriously rooting for Sophie here because I did not want to be eliminated from the office pool (and, let’s face it, the final duel will likely be an endurance challenge and she’d lose to Ozzy) but she fell out of the running pretty quickly.

The challenge required players to climb a wall and untie bags of puzzle pieces. Solving the puzzle would give them three numbers, which they’d use to undo a lock and raise their flag to win. The challenge pretty much came down to Brandon and Coach, with the Littlest Hantz coming out on top. Sorry, Coach! I can only assume that Brandon must have prayed about 30 seconds more than you did.

Brandon won the Immunity necklace and pizza back at camp, which he decided to share with Rick. Curious choice. Maybe he thought Rick’s mustache would interfere with his pizza consumption, thus leaving more for Brandon to eat.

While Brandon and Rick eat, Sophie and Coach discuss the possibility of eliminating Albert. Sophie has always been suspicious of Albert and his intense efforts to garner jury favor, and Coach suddenly agrees that he’s sneaky. Sophie goes to discuss the idea with Brandon and Rick, and in the midst of the conversation Rick mentions that yes, Albert is sneaky, because he’d recently confirmed a final three deal with Rick. Uh-oh! This did not sit well with Brandon, who’d believed all along that Albert was going to the finals with himself and Coach. Suddenly everyone was yelling and it was so much fun.

Unfortunately for everyone, Brandon’s not actually playing the game. Even though Albert flat-out lies about what he said to Rick, Brandon suddenly decides to forgive Albert. He even goes so far as to tell Coach that if need be, he’ll give Albert the Immunity necklace to protect him. Coach decides that he needs to pray about who to vote for.

You have to hand it to Coach – telling Brandon “I need to pray, and I promise you this: I will do whatever God tells me to do” was a great way to eliminate him. Brandon can’t blame Coach for the decision now, it was all God’s doing! Man, God is so fickle. Tough break, Brandon. Too bad your buddy Coach doesn’t have a little something called free will!

Livin’ On A Prayer

Heading into Tribal Council, it looked as though Brandon and Albert would be voting for Sophie while Rick and Sophie would be voting for Brandon – so it would all come down to Coach and whatever name came into his mind while he was bent over in the sand like a crazy person.

Brandon walks into Tribal with the Immunity necklace on, but he is not immune to stupidity. He immediately told Probst that he was giving the necklace to Albert. Surprise! This is a move parallel in idiocy to Ice Cream Scoop Erik giving up his Immunity necklace in Survivor Fans vs. Favorites. Only then it was because of beautiful women, and this time it’s because of God and/or a chemical imbalance in Brandon’s brain.

As Brandon rambled on about his former life as a gang member, I was still thinking Sophie might be eliminated. Logically, yes, she and Coach have also been tight from the beginning and there was a good chance he’d refuse to vote her out. But he’s also been tight with Brandon from the beginning, and Brandon does not seem as much of a threat in the final three as Sophie does. Plus, I have Sophie in the office pool and nothing ever goes my way.

Albert joins in the conversation but lays the Christian stuff on a little to thick. Jeff pounces, asking if he, as a Christian man, should give Brandon back the necklace to protect him? Whoops! Albert is godly, but not that godly. He says he feels secure that Brandon won’t be going home and therefore keeps the necklace.

The vote comes in and Brandon goes out, with Coach whispering “It’s God’s will. Go win redemption,” into his ear. Also gone? Albert’s chances of winning the game – he looked like a total jackass there.

Thanks to this episode, I am officially excited for Sunday night’s finale. Even if I didn’t have Sophie in the office pool, I’d be rooting for her. I think she’s played a very sharp, very calculated game and deserves it. But could Coach win instead? It seems like everyone thinks he won’t get votes in the end, but I can easily see people deciding he played the best strategic game. And then, of course, there’s Ozzy – if he wins Immunity and forces his way into the final three, he’ll be a tough cat to beat. As for Rick, Albert and Brandon? Um, thanks for comin’ out boys. Don’t forget to burn your buffs on the way out the door.

So what do you guys think? Did this episode help redeem the season at all? Who will you be rooting for on Sunday night?