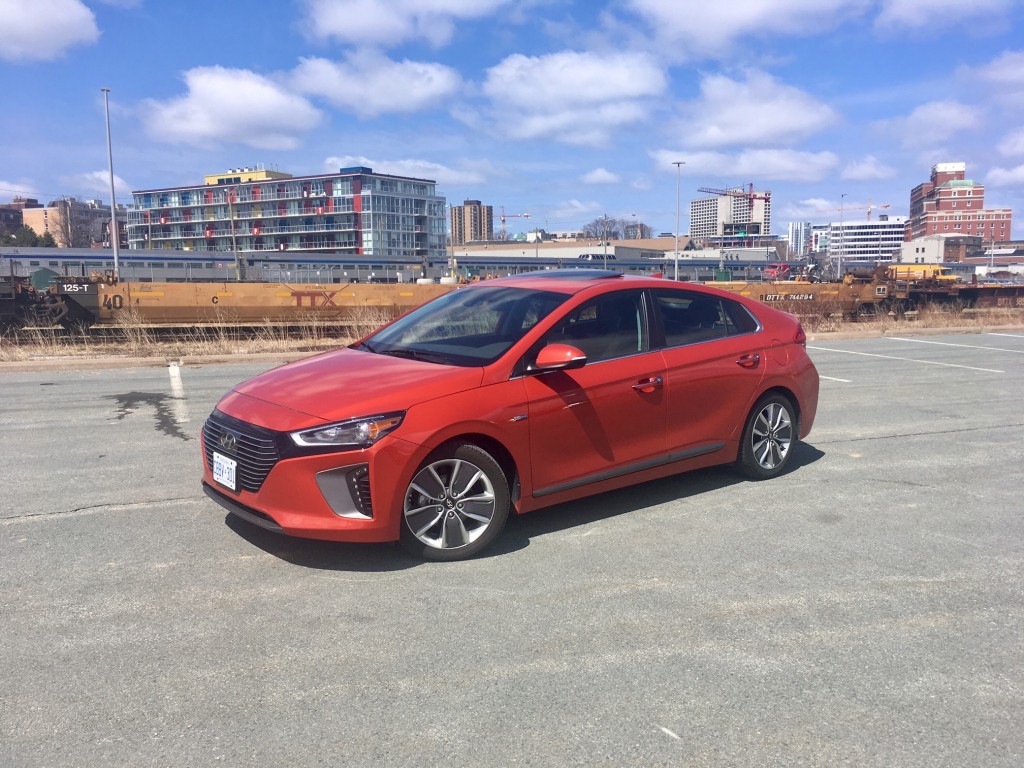 It’s a bout time an automaker gave Toyota a legitimate challenge to the formidable Prius.

Sure, Honda had a bit of a go with the Insight, but with a disappointing ride, and similarly disappointing fuel mileage and quality, its short five year lifespan surprised few of us in the automotive world.

Ford could claim they’ve got a strong competitor against the Prius in the form of their C-Max hybrid. It even comes as a plug-in hybrid to battle the Prius plug-in. But the C-Max is much larger in size and gets nowhere near identical levels of fuel consumption figures as a modern day Prius.

So, Toyota has been laughing all the way to the bank so to speak as they happily continue to take hard earned cash from the environmentally and/or budget conscious folk, knowing their product is still the best at the old hybrid game.

Never forget about the Koreans though. Ever. They’ve been steadily offering up competition in almost every segment you can think of and recently, Hyundai has decided to sink their teeth into another segment they’ve been otherwise absent from. You guessed it. Hyundai wants to get that Prius money. 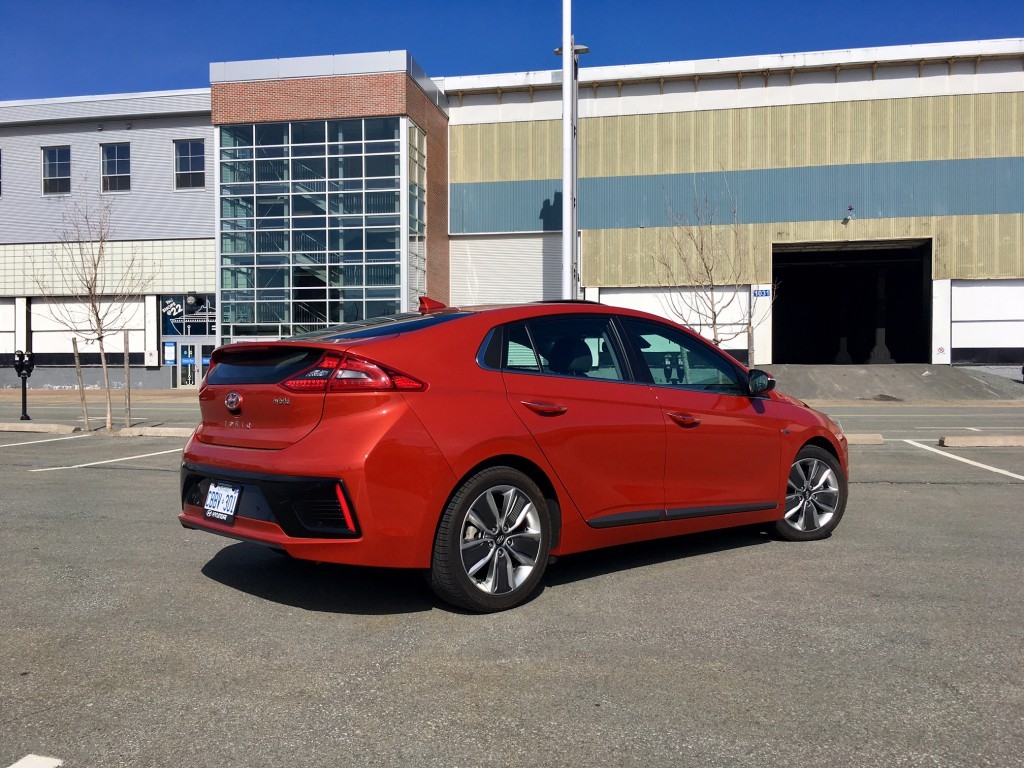 I do genuinely like the Prius and enjoy driving it for the most part. I know the Prius has a certain stigma attached to it, but that doesn’t bother me. What does bother me, though, is the current exterior styling. It’s certainly different, but not really in a good way in my mind.

The Ioniq on the other hand, takes a more conventional styling approach. One might even go so far as to call it handsome. The overall shape is similar to the Prius (which is essential when it comes to creating the least amount of drag) but with the rather attractive ‘eco’ wheels, large eye-catching grille complete with gloss black finish, LED daytime running lights and nice looking LED tail lights (that I wish featured amber turn signals, but it doesn’t), the Ioniq already has the Prius beat when it comes to being proud to show it off in your driveway. 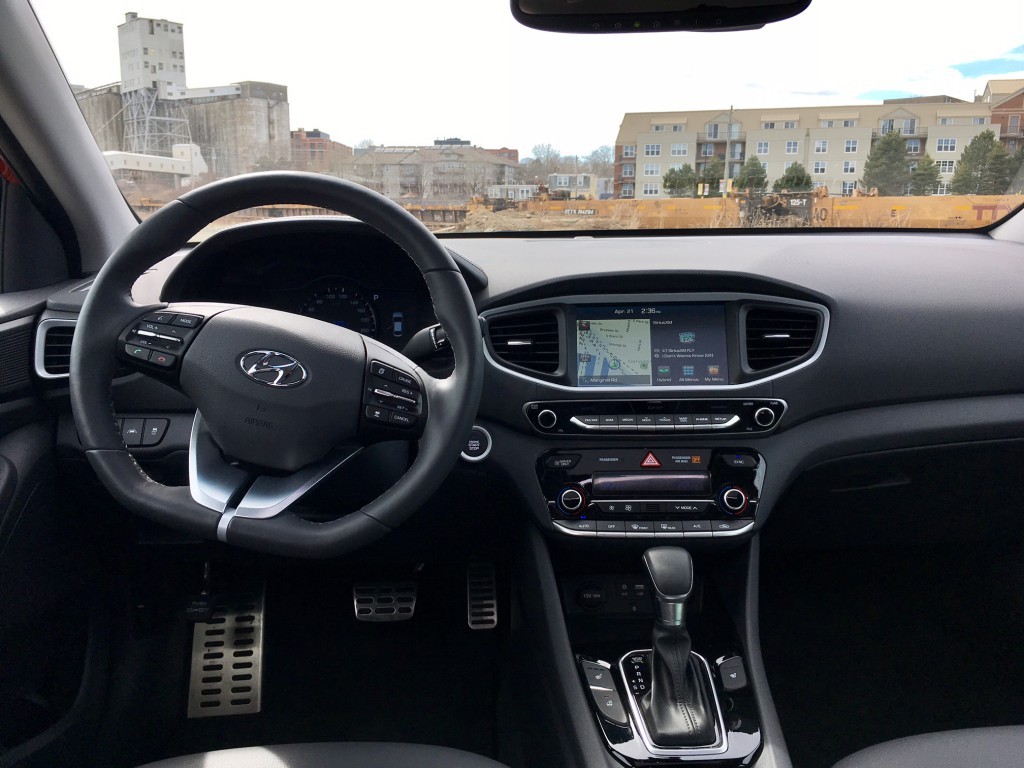 Unlike the Prius, you’ll step into a fairly normally designed and laid out interior. Surprisingly, you get Hyundai’s new sport designed flat bottomed steering wheel normally  reserved for Hyundai’s more performance oriented product. Then you’re greeted with an admittedly spartan dash that is livened up a bit by easy to use touch screen. You’ll also get a conventional gear shifter, unlike the Prius. 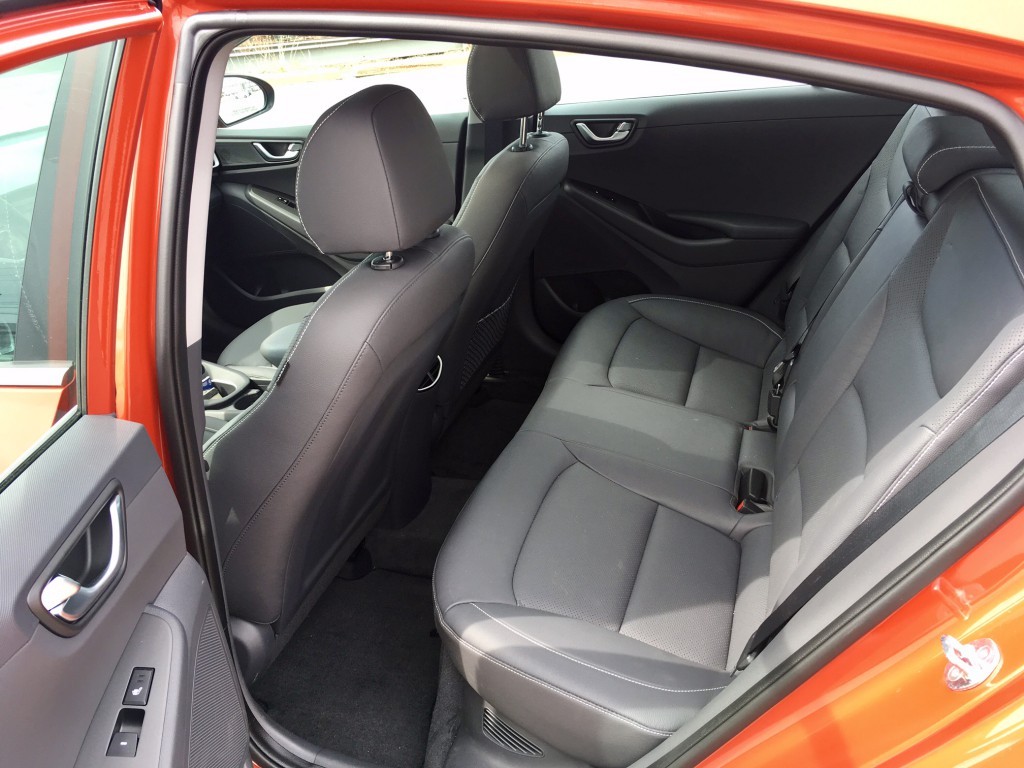 Interior room isn’t bad, but don’t expect mid-size dimensions. The Ioniq is more compact sized both inside and out.  Luckily, seat comfort is good and it successfully conveys the high quality nature of the cabin. As you’d expect by now in most Hyundai product, value is the name of the game. Though with my tester being the Limited model, a lot of the features are things you probably should expect to get in the first place.

I used the Ioniq to reluctantly take my favourite aunt back to the airport after a visit. The Ioniq’s generous, albeit shallow cargo space handled her extra large suitcase, small carry on suitcase and backpack with ease. The battery doesn’t impede cargo space much and the seats fold 60/40. 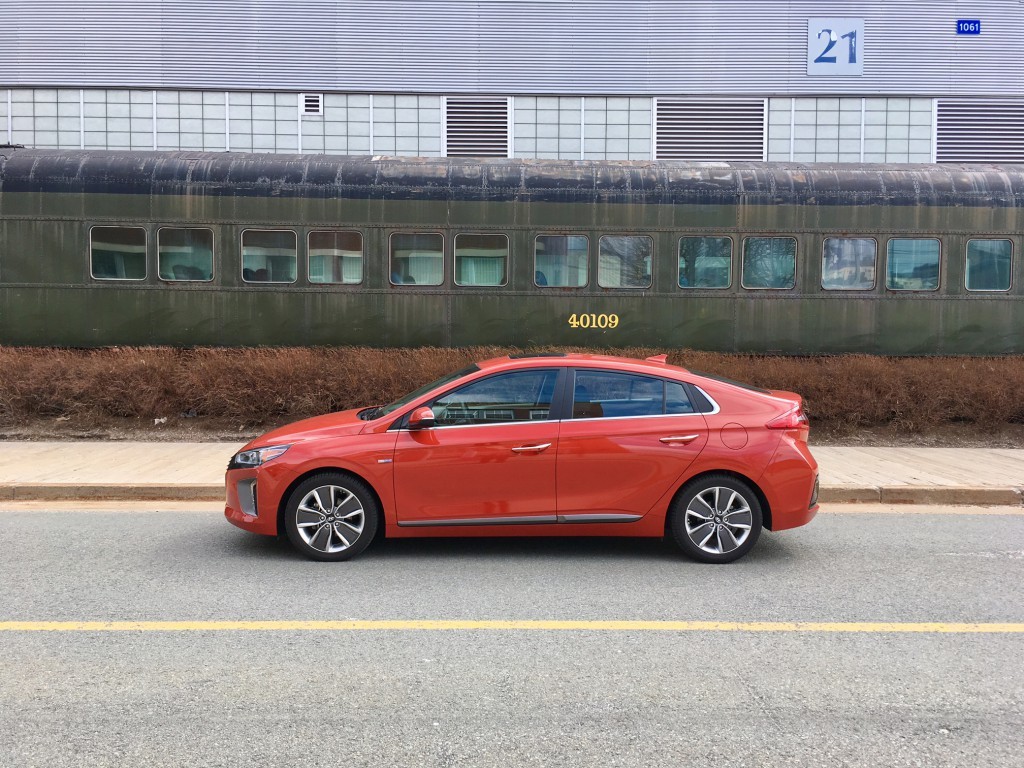 The Ioniq gets its power from a 1.6 litre inline 4 cylinder which produces 104 horsepower and 109 pound feet of torque. The batter is a 1.56 kWh Lithium Ion. Together, you’ll get a combined horsepower rating of 139.

But that power isn’t married to a continuously variable transmission (CVT) like it is in the Prius or pretty much every other hybrid out there today. You’ll get a dual-clutch seven speed automatic instead which is a pleasant surprise. At least, it seems that way until you get in and drive. 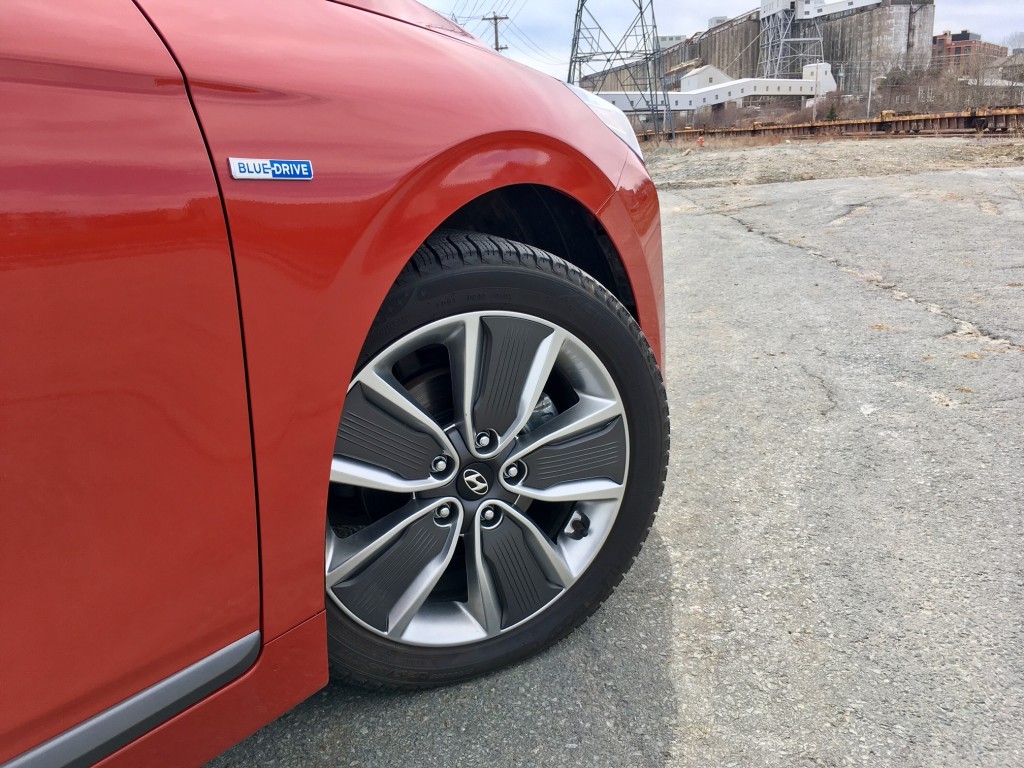 The whole point of a dual-clutch is to line up the next gear to engage when needed, and thus, creating very quick shifts. But this dual-clutch feels laggy and unrefined. Perhaps years of driving Volkswagen and Audi dual-clutch transmissions has spoiled me, but I would expect a transmission that shifts more predictably and with a stronger measure of smoothness.

Putting that aside for the moment, the Ioniq is refreshingly willing to get off the line. There are driving modes as well which includes a sport mode if you want even more power off the line. Of course, your fuel consumption will suffer whenever you keep it in sport mode so it’s best to use it only for specific situations like merging onto a highway. Otherwise, normal and even eco modes will do just fine for most. 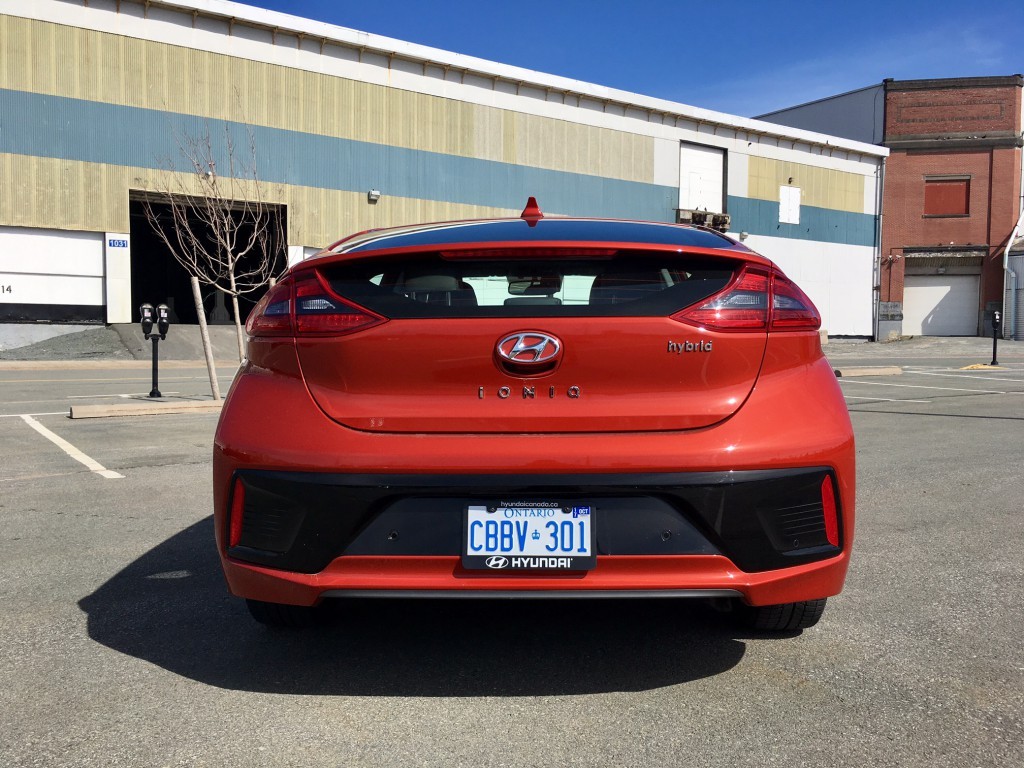 Don’t be too scared to throw it into a corner. The Ioniq might surprise you. There is indeed body roll and nose dive upon braking, but for the most part, it can handle itself decently. And by decently I mean better than the Prius, which is already not too shabby of a corner carver in its own right. And for the record, I’m not suggesting either are performance monsters in the corner, I’m just saying don’t let the eco-mindedness of either car define their capabilities when pushed.

The Ioniq has a willingness to stay in electric drive for as long as possible which is fantastic. It not only helps to use less gas, but it helps to creep up on Mother Nature as I was able to do when I spotted some deer hanging out by Halifax’s McKay bridge (pictured below). While they did immediately notice me, the silent electric motor didn’t startle them. 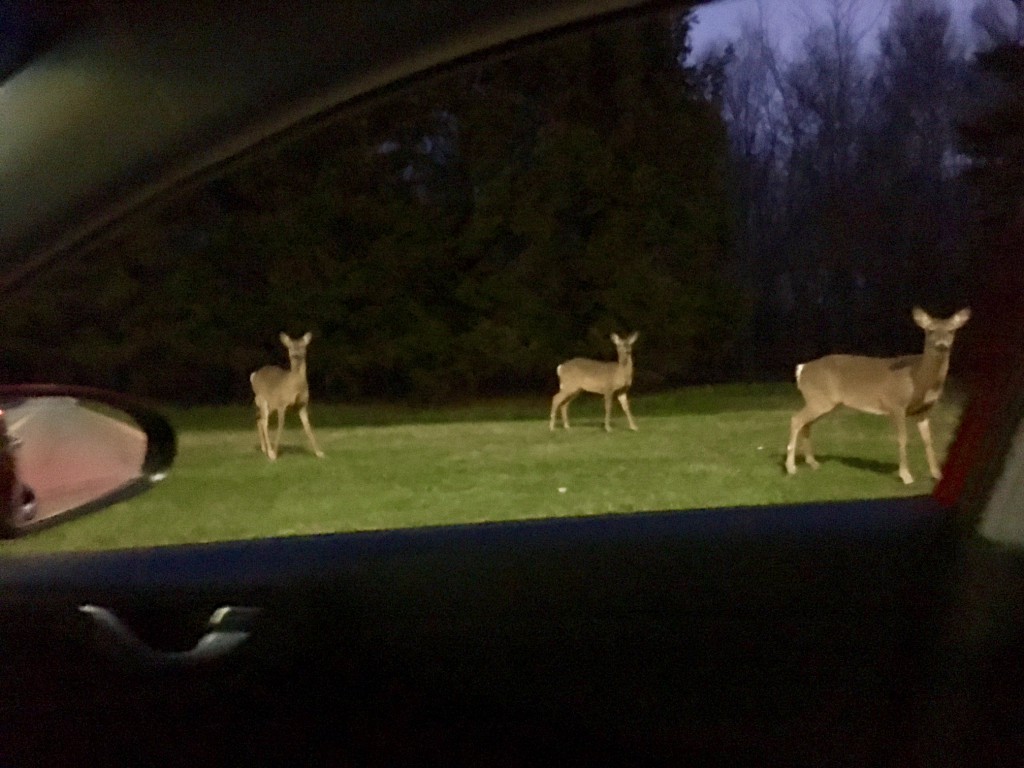 In terms of in cabin comfort, I’d have to give that one to the Prius. The Ioniq is by no means uncomfortable, but the chassis doesn’t handle bumps and other imperfections with a whole lot of grace. If you are in the back seat, the ride can be a bit jarring but as my aunt pointed out on the way to the airport, the heated seats in the rear make you forget about the bumpy ride.

Rear visibility is somewhat impaired by the large bar that spans the width of the hatch, but that is unavoidable thanks to the nature of the design. Still, I don’t recall the Prius’ bar being as intrusive. There is a nice back up camera to help with reversing duties and given the Ioniq’s compact dimensions, driving around town and in parking lots is a breeze. 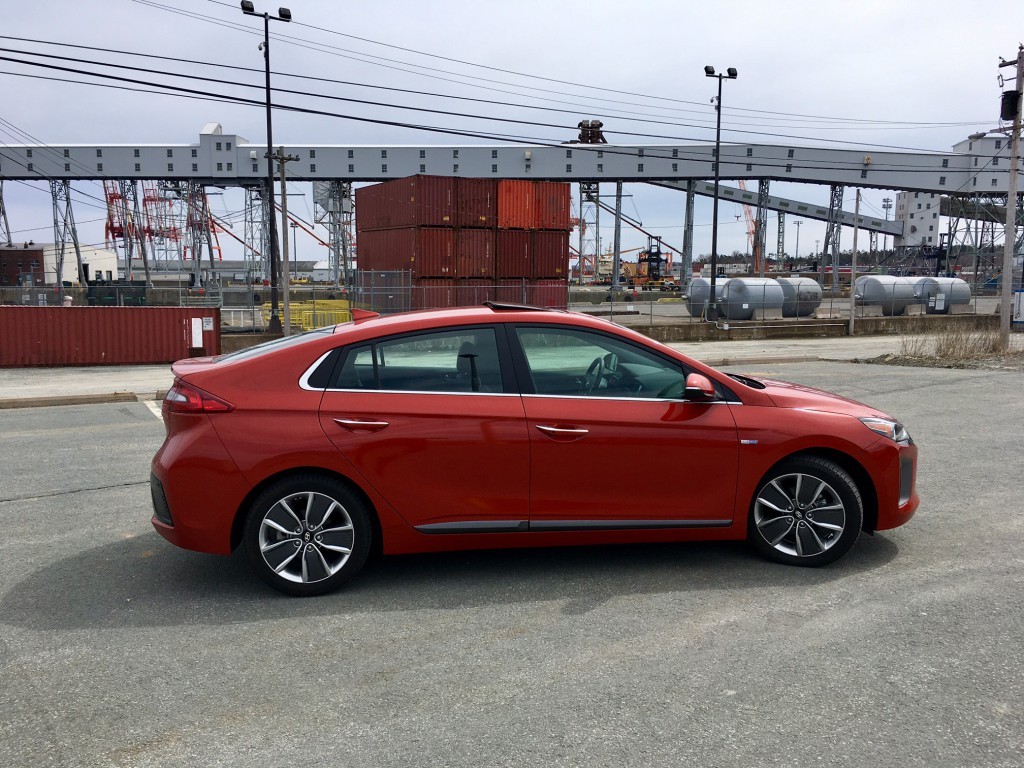 Here we are, to the reason why you would even buy an Ioniq in the first place. Officially, the Ioniq is rated at 4.3 L/100 kms city and 4.4 L/100 kms highway, which beats the Prius and now makes it the most fuel efficient hybrid on the market today. That’s some nice content for Hyundai’s marketing department, but in real world driving, I returned 5.3 L/100 kms in mixed city/highway driving. The Prius may be slightly less efficient, but I returned much better fuel consumption numbers in it last year, averaging 4.0 L/100 kms by the end of the week. 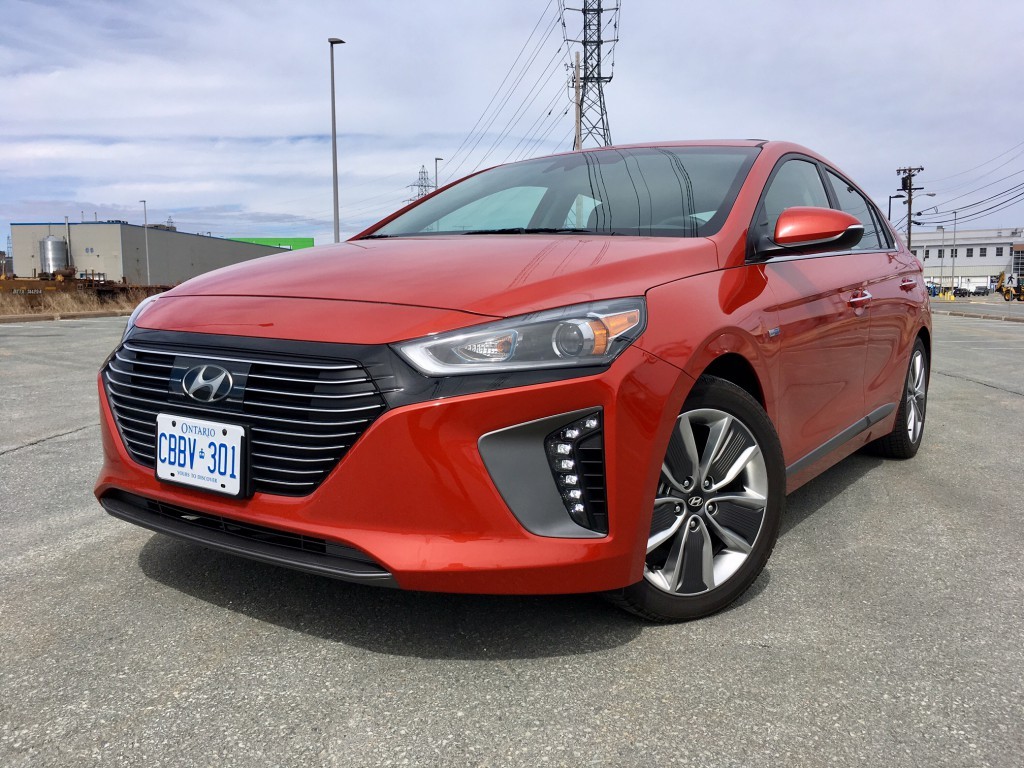 But unless outright efficiency is the name of your game, the Ioniq is the strongest contender the Prius has had against it in its history on this planet. It looks better, drives as good and even arguably better, has more content, a nicer and more conventional interior and lots of cargo room. Is that enough to beat the reigning king?

Well let’s just put it this way. Once upon a time, McDonald’s was the biggest and fastest growing food chain in the entire world. Today, Subway has more restaurants worldwide than McDonalds. So then, which would you rather eat? McNuggets are good, but I’m willing to bet my money would go towards a footlong roasted chicken, since you get way more food for the money. And in the same sense, even though I do genuinely enjoy the Prius, I think I’d take the Ioniq.