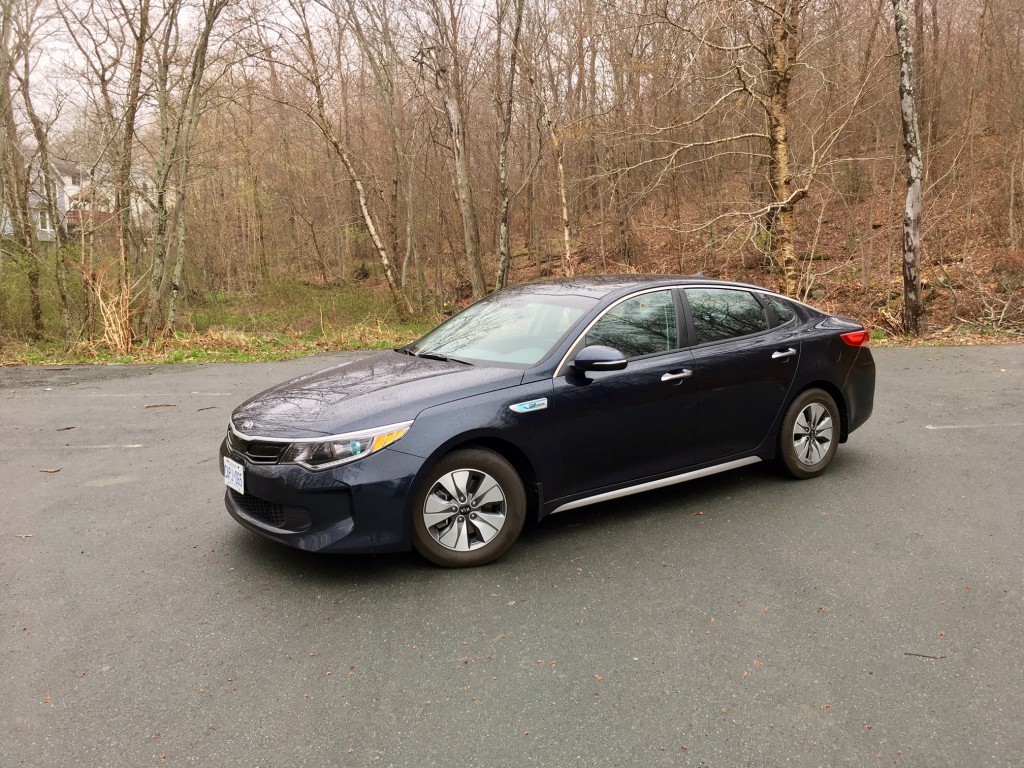 A few months ago, I drove a base model Toyota Camry Hybrid for a week. It was silver. And it was a Camry. In other words, it was completely fine with a few notable positives here and there, but overall, it lacked joy. It was quicker than you’d expect, but not in an exciting way, for instance.

So when I learned that the next Kia product the Korean automaker decided to send to the Maritimes wasn’t the Soul Turbo or the re-worked Cadenza, but a Optima hybrid in base form, my excitement dwindled quicker than setting foot in a Camry hybrid.

I have driven the new Optima before, but it was a turbocharged version with well over 200 horsepower along with all the bells and whistles you could hope for. That was an interesting and exciting car.

But a base hybrid version? 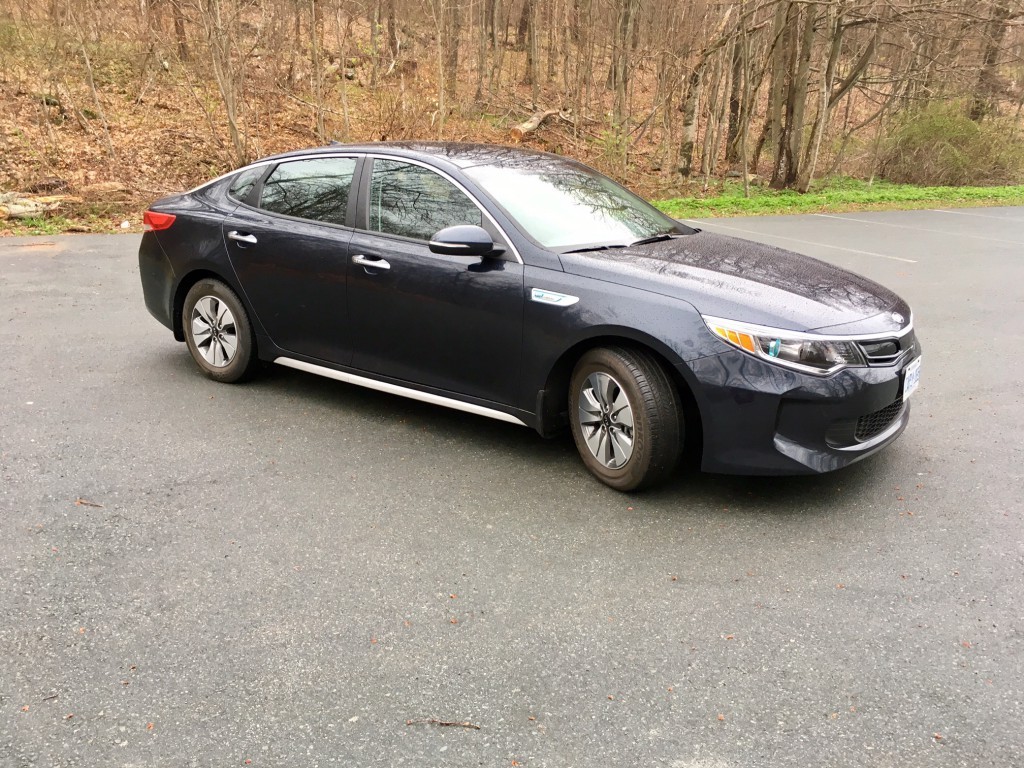 It goes without saying that the Optima itself is a handsome vehicle and has been for quite some time. Sure the higher trims make more of a case for its exterior styling forte (pun intended) but I must say, Kia offers up a more interesting looking base model hybridized sedan than Toyota’s Camry. For starters, you get 16-inch alloy wheels. You get LED daytime running lights and LED tail/brake lights. You get a unique front and rear facias.

It’s long and relatively low-slung body give it way more personality. While I will admit the Camry hybrid I drove was let down immensely by the choice of paint colour (I can’t stand silver cars), there’s no doubt that this Optima stands out way more. It has more visual personality off the bat. And since Optimas don’t sell nearly the same numbers that Camrys do, hybrid or not, you’ll be riding in something that’s far more unique. 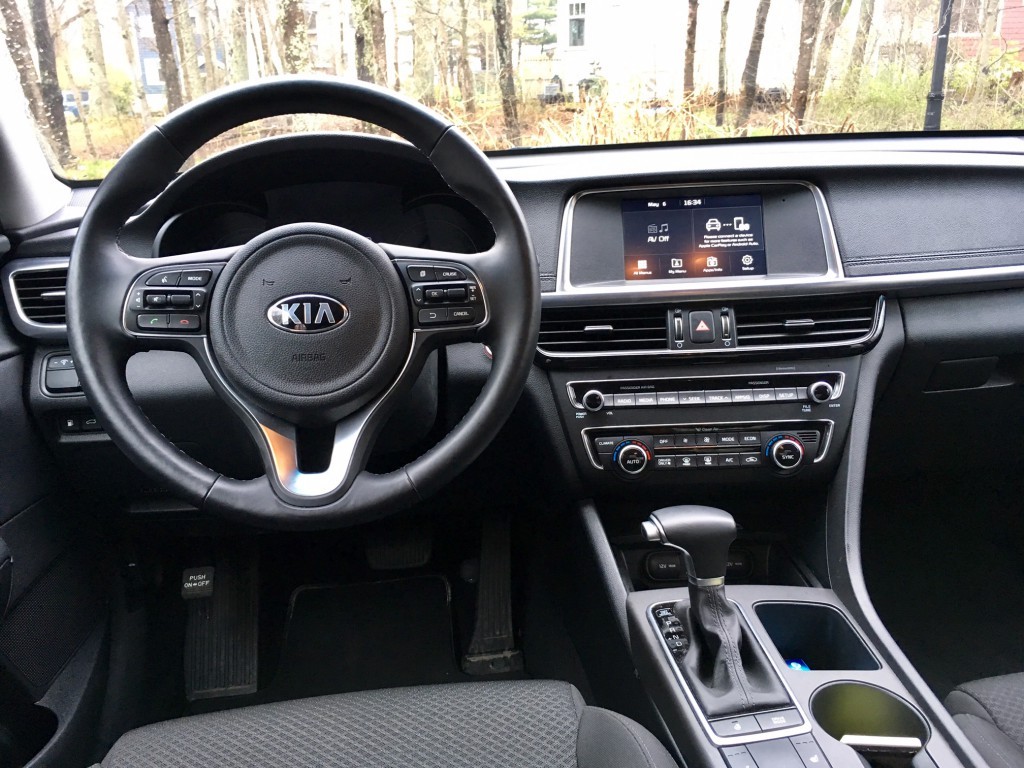 So, you’ve heard about the Korean twins’ ability to make value synonymous with their brands, have you? Good. Because it’s actually very true. For instance, in this base trim Optima, you’ll get heated seats, a heated steering wheel, proximity power folding mirrors and Sirius satellite radio to name just a few.

On top of that you get a nicely laid out dash and centre stack. The dash layout is uncomplicated and easy to read. Want to know how much gas you’re burning? There’s a clear and well thought out readout. Want to switch radio stations? There’s a clear button and knob for your choosing. The infotainment system is no nonsense. 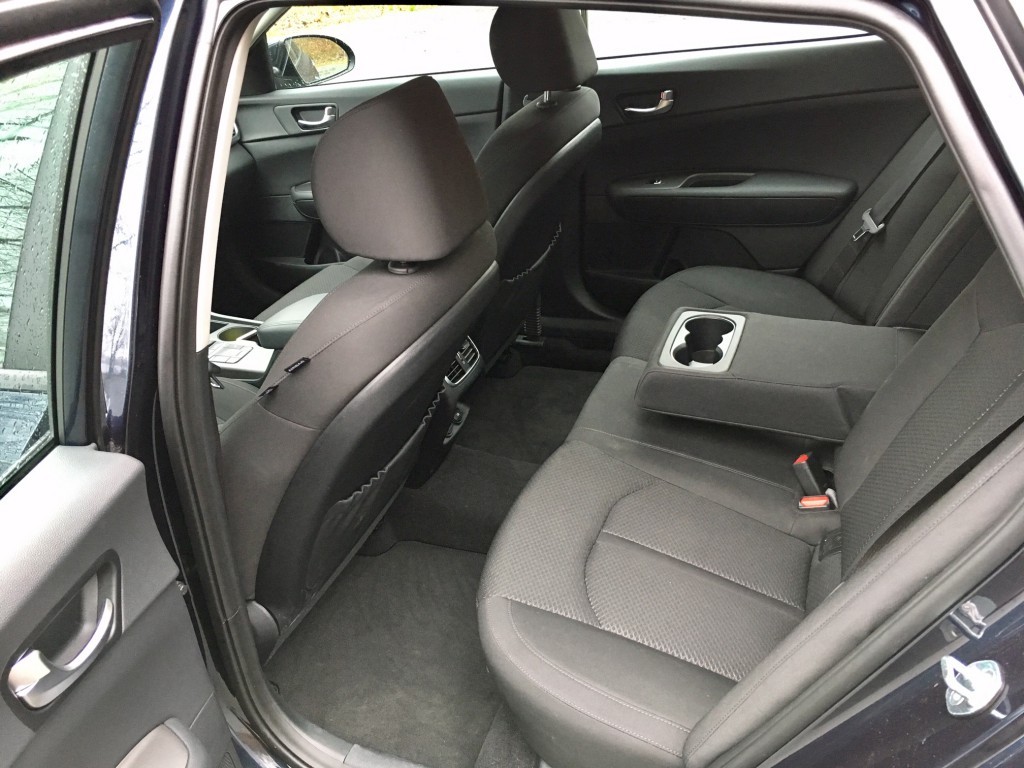 As you’d expect for a mid-size sedan that borders on being full-size, interior room is quite good matched with a quiet cabin and good quality materials.

You also don’t take much of a penalty when it comes to cargo room since the battery is shoved underneath the trunk space, meaning you get a deep cavernous space for all your junk.  You can also maximize your space by folding the 60/40 rear seats. 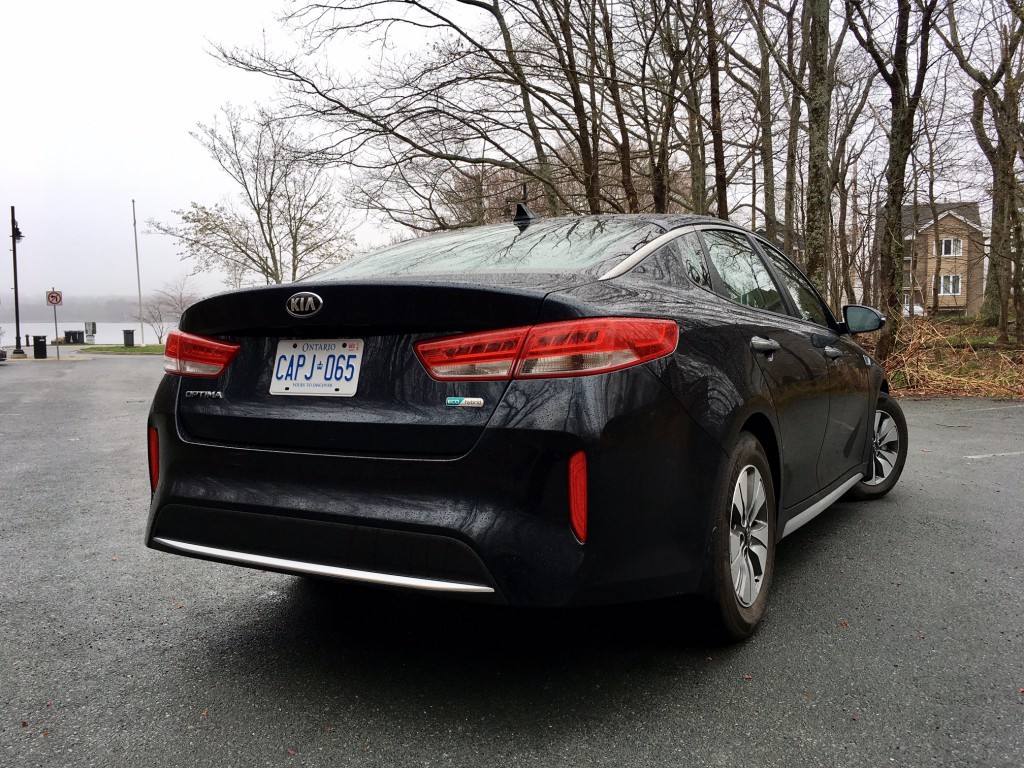 And joy of joys you’ll get a good old fashioned six-speed automatic. No CVT nonsense, so if you’ve never driven hybrid before, aside from touchy brakes and sudden jolts of torque, the Optima hybrid shouldn’t take a whole lot to get used to it.

The gas motor is a 2.0 litre 4-cylinder which makes 154 horsepower and 140 pound feet of torque. When you match it with the electric motor, you’ll get 192 horses and a whopping 271 pound feet of torque, which explains why the Optima has a tendency to leap forward when all you want it to do is proceed gracefully from a stop.

But as far as hybrids go, this is plenty powerful for the average bear. 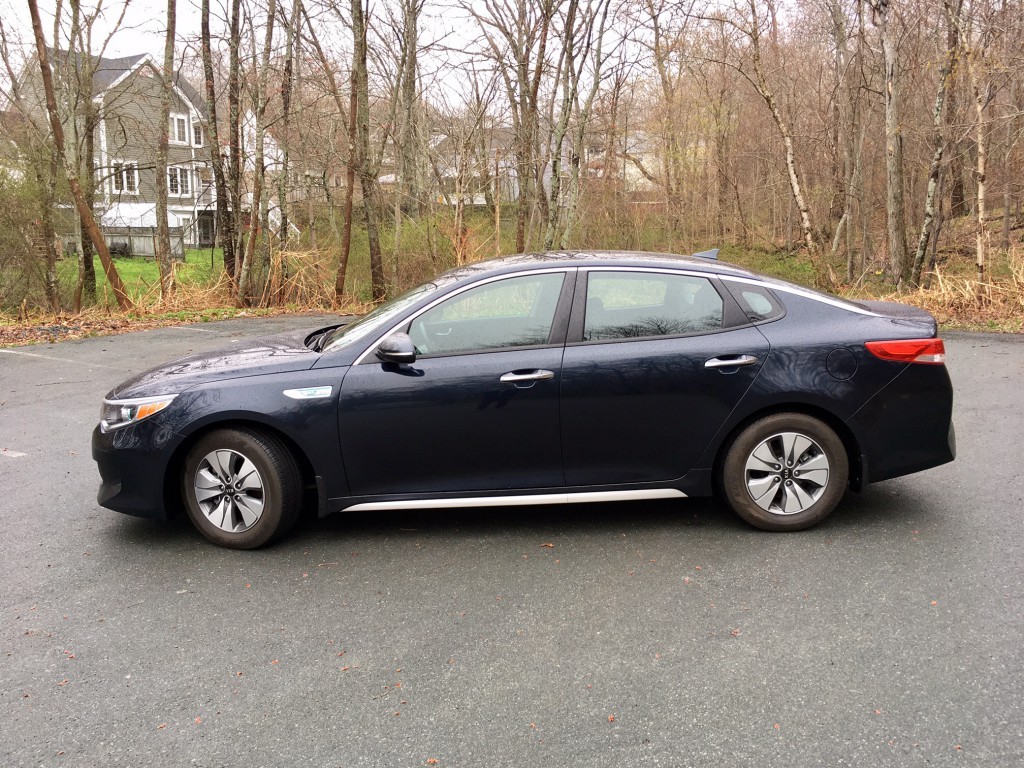 There are different drive modes which allow you to tame your inner tire kicker or encourage it. In sport mode, the Optima is plenty quick, but it also sort of defeats the purpose of driving a hybrid in the first place. You will be burning nearly the same amount of gas if you stomp on the right pedal, as you would a conventional gas powered Optima. Therefore, even though Eco mode is decent, your best bet is the laissez-faire approach by keeping it in normal mode. You’ll have all the power you need matched with a decent amount of efficiency, and it’s the mode I used the most often during my time with it.

Steering is actually nicely weighted and direct. Its size negates any sort of precision corner carving, along with the tall eco friendly tire side walls, but it certainly isn’t akin to driving a yacht into a corner either. 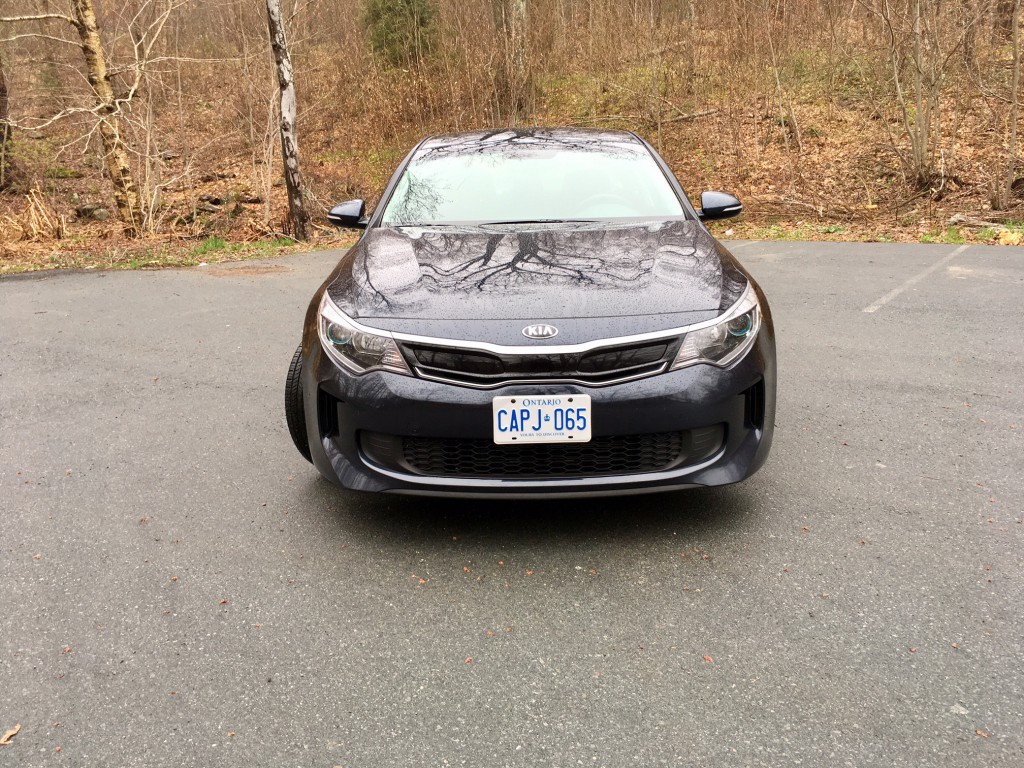 Like the Hyundai Ioniq I recently tested, the Optima hybrid seems fairly keen to keep you in electric mode for as long as possible. This makes it a strong contender for daily city driving. You can also get the Optima in plug-in form if you want to maximize the kilometres you travel on the electric motor. Depending on where you work, with a plug-in, you could travel to work and back without using any gas at all.

On top of it all, you’ll be treated to a decently comfortable ride especially since the electric motor and gas engine work together seamlessly. 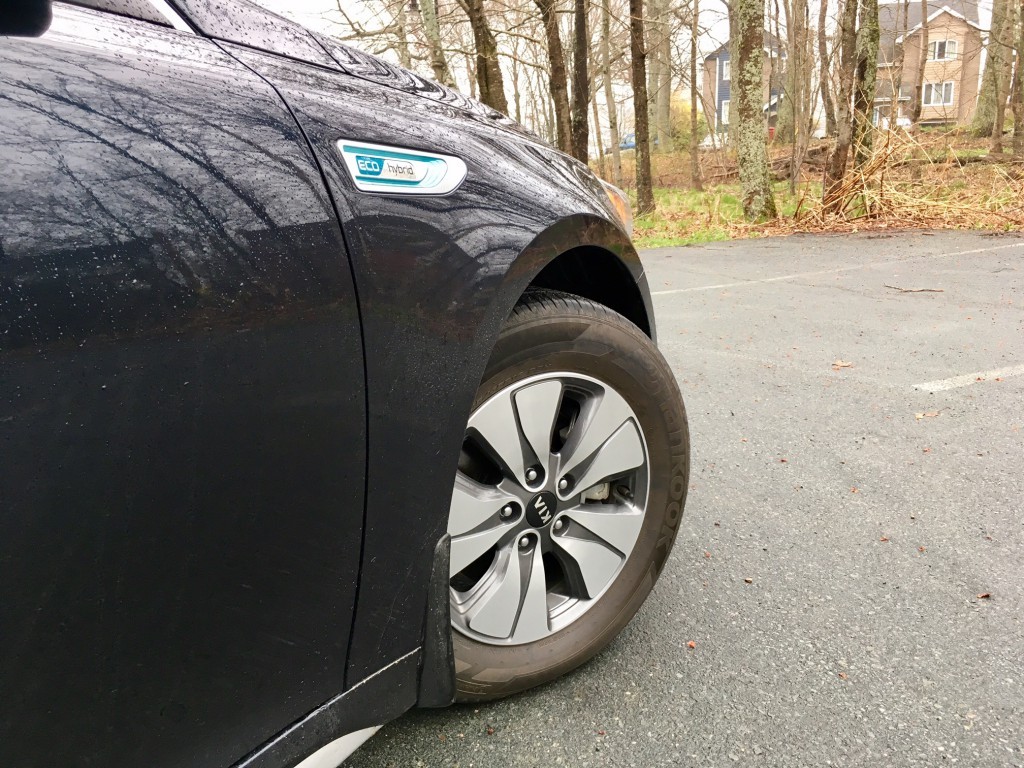 Officially rated at 6.0 L/100 kms city and 5.1 L/100 kms highway, I was able to return a respectable 5.8 L/100 kms in mixed driving. I have a feeling that if I kept it in eco mode more often than not, the I likely would have been able to do a bit better than that. Considering the Ioniq is a fully dedicated hybrid where I saw 5.3 L/100 kms, that isn’t too shabby for such a big vehicle. 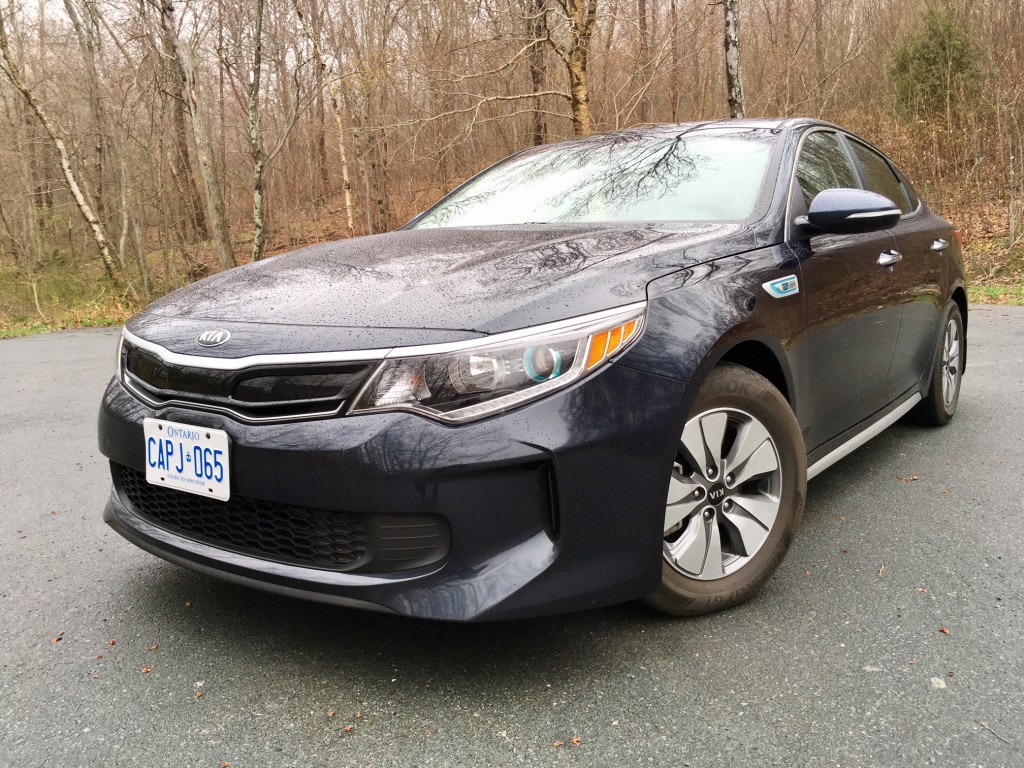 As much as I made fun of the mundane nature of the base model Toyota Camry hybrid I had, it, and the Kia’s version are strong reminders that it’s possible to have a spirited vehicle despite any concerns you may have for your pocket book and/or the environment. Of the two, my money goes to the Optima hands down. Not only is it more interesting to look at in my opinion, but it features a lot of goodies as standard that you wouldn’t find on the base model of a premium brand. It’s a package that, when blended with proven efficiency, is hard to beat.