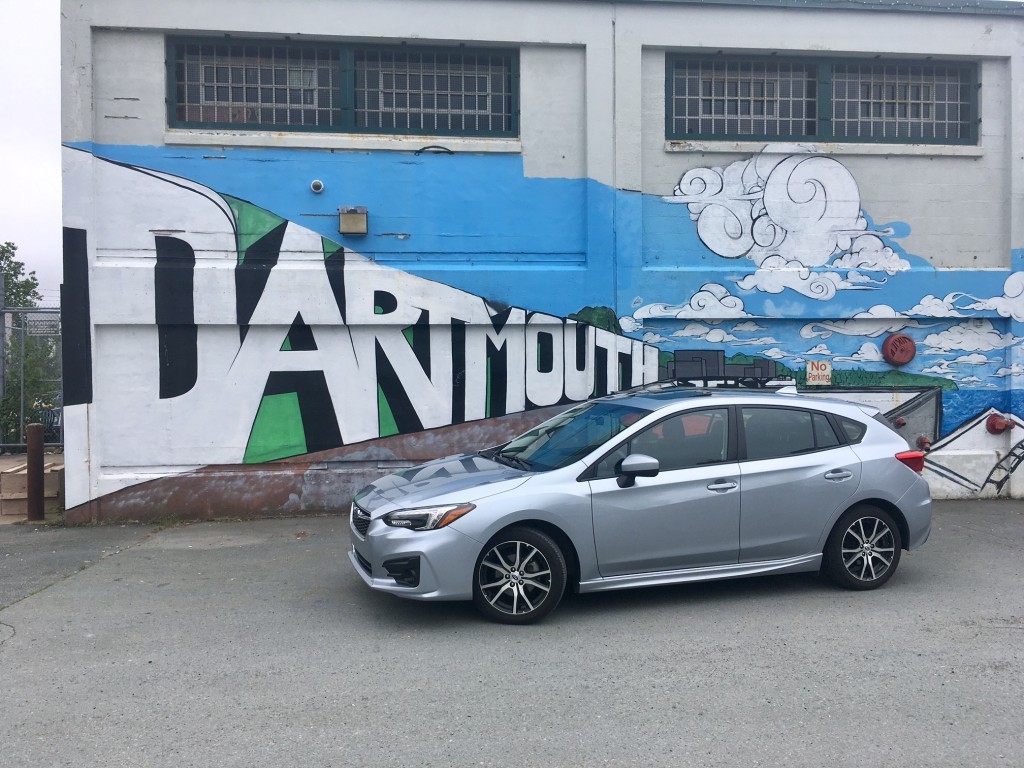 In my opinion, there are only a few brands that truly have a cult-like following.

I’m not talking about BMW or Honda fanboys, early Tesla adapters or Mustangs vs. Camaros.

What is it about these brands that select people find so appealing? A lot depending on who you ask.

Saab used to wear the crown when it came to quirky. That is, until GM ruined the brand ultimately leading to its death.

Volvo used to hold its own too but the brand is making no apologies for de-weirding itself to compete head-on with the likes of Audi and BMW. In fact, because Volvo has moved so far upscale, its models are now out of reach for traditional Volvo buyers. Case in point, when my father – a long time Volvo buyer – gets rid of his C30, he will look elsewhere. So far he has showed interest in a particular brand: Subaru. 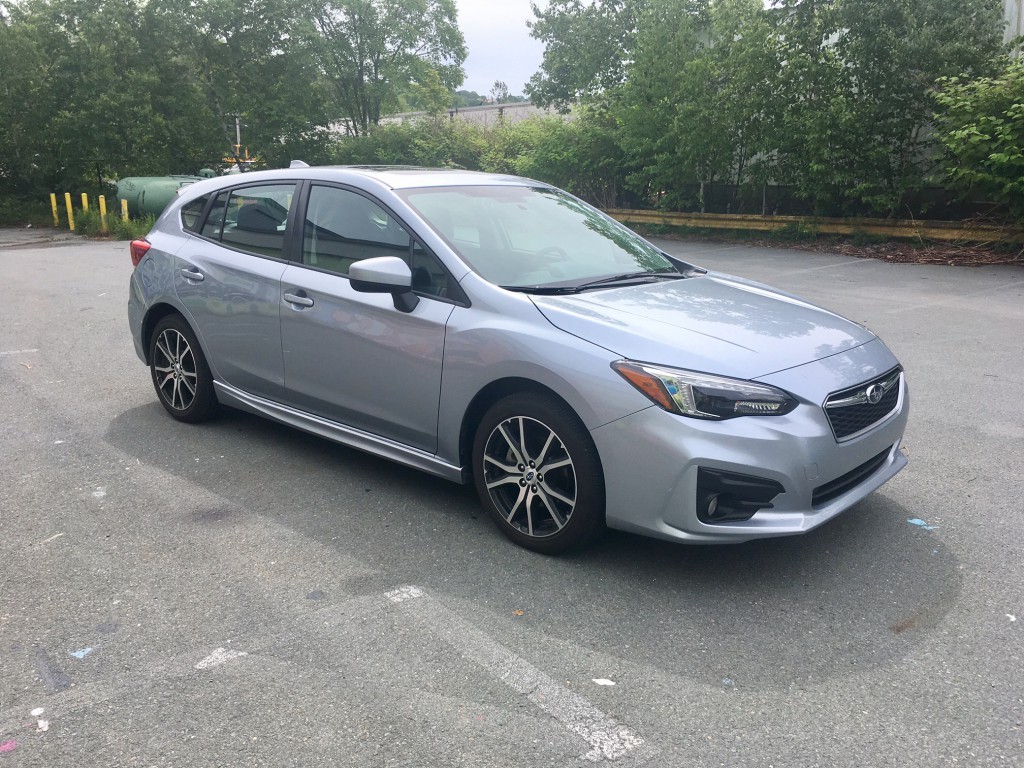 With the death of Saab and Volvos becoming too pricey, Subaru has a great opportunity to snag customers who love them some quirks. But that’s not what Subaru is necessarily after. They want those who mindlessly buy Corollas and Civics. That’s where the money is.

As such, a new Impreza has arrived. I’ve heard people say that it doesn’t look much differently than the previous generation and I honestly can’t see what they’re on about. Not only is it sleeker and less angular but it now looks to be more in line with the rest of the family styling. Eye-catching tail lights, re-worked headlights and grille, along with bolder new wheel designs help it to stand out. In fact, with the exception of perhaps the Mazda3 hatch and maybe the Golf, I’d say it’s probably the best looking hatch in the segment right now. And if hatchbacks aren’t your thing, which is a surprisingly popular opinion amongst the people I know, you can have the Impreza in sedan form, though the proportions of that vehicle aren’t as agreeable to my eye. 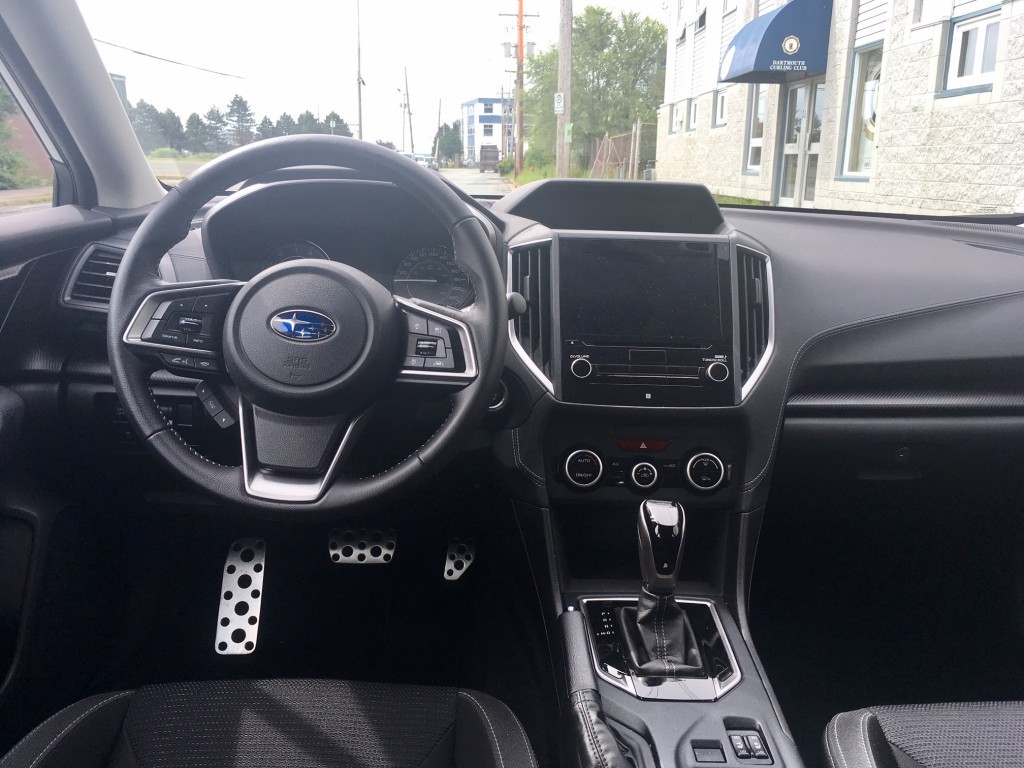 Inside is really where the story is. It’s clear Subaru worked hard on the interior to give it a premium look – and crucially a premium feel. The infotainment system is straight forward and responds to commands without hesitation. The feel and operation of the gear shift is oddly satisfying. The cloth seats are quite comfortable.

Subaru must be tired of hearing us auto writers drone on about how Hyundai and Kia are value leaders because in truth, the Impreza comes with a decent amount of content in my press vehicle’s as tested ‘Sport’ trim including 17-inch alloy wheels, LED headlights, LED daytime running lights and tail lights, a sunroof, heated seats, adaptive cruise control lane departure warning and lane keep assist, and pre-collision braking. You’ll get all the content for just $27K.

You’ll notice the last four features are safety oriented which may be another reason Subaru might be snagging Volvo customers. Subaru has been quietly making safety a priority and it has lots of awards from IIHS to prove it. 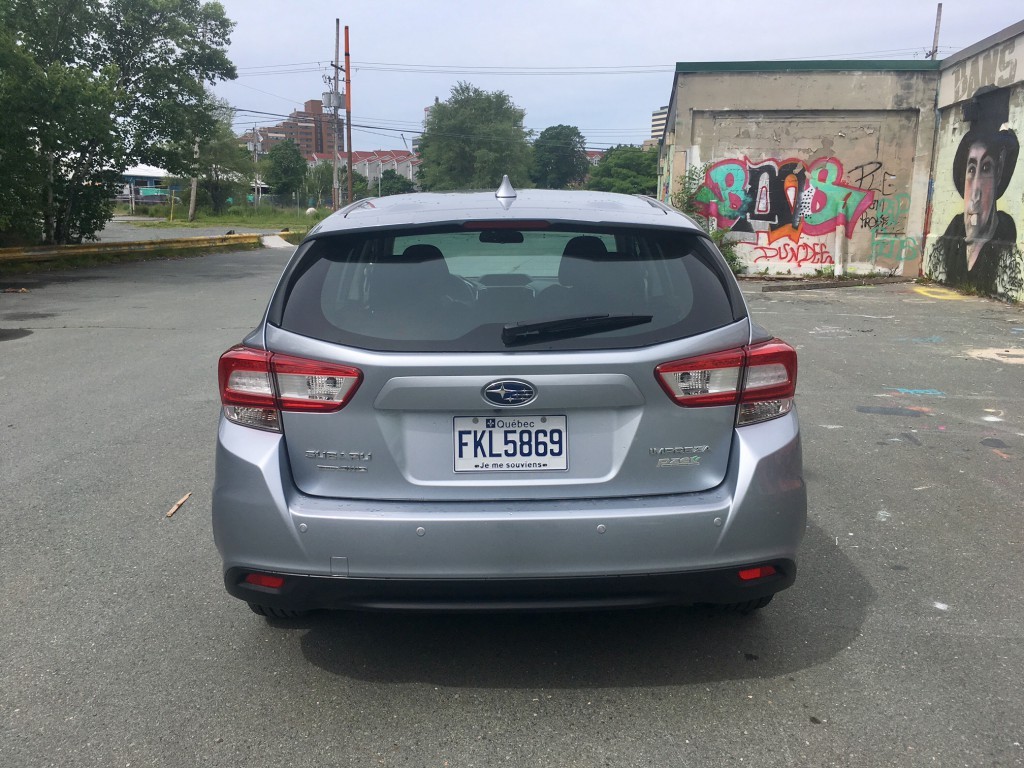 Back to the interior. As mentioned, the seats are comfortable and offer good support and headroom and legroom will be adequate for most. Cargo room comes in just shy of 600 L with the seats up and 1566 L with the rear seats folded down.

Subaru’s dedication to making a more refined interior also seems to have transitioned into ride and handling too. Before, Subarus felt a bit tinny on the road and a bit heavy too. Now the Impreza features a ride that your mother-in-law won’t complain about, and it goes about its business with a hushed flair. It’s not Buick-like in its quiet cabin or on-road feel, but the improvement is quite noticeable, even to those unfamiliar with Subarus, like my girlfriend who commented on how nice the ride was. 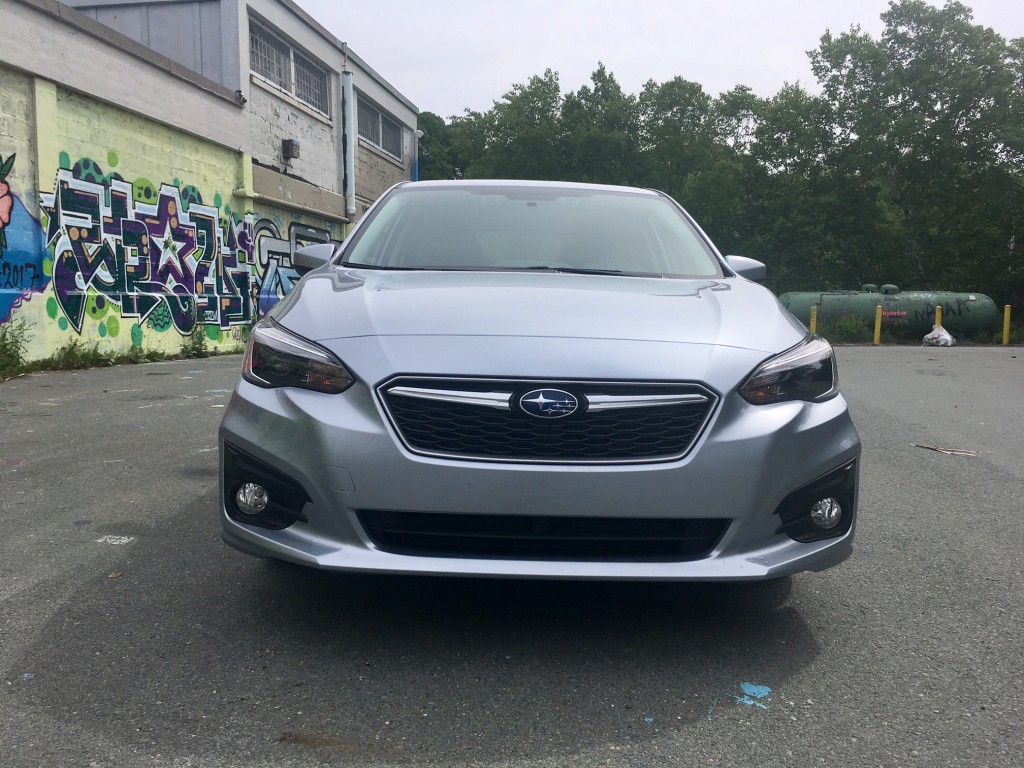 One thing my girlfriend didn’t like was the powertrain set up. Unless you opt for the significantly more energetic WRX (which now only comes in sedan form), you’re left with one engine option and it’s a 2.0 litre flat four-cylinder which produces 152 horsepower and  145 pound feet of torque married to a continuously variable transmission (CVT). While I personally think the Subaru’s power output is more than adequate for city driving, my girlfriend said it felt sluggish and underpowered. Granted, she is used to driving her more powerful Ford Fusion, but she may have a bit of a point. Most of the Impreza’s competition offer horsepower figures in the 170-190 horsepower range these days or at least offer it as an option. So if you’re looking for something with a lot of oomph, you may need to step up to the Legacy or Outback. The CVT isn’t as soulless and some, but it still does to a pretty good job of holding back power, even when that’s all you want. The CVT does have faux gears programmed into it which you can select manually via paddle shifters and this does improve performance, but the fact is, you still won’t be winning any drag races. 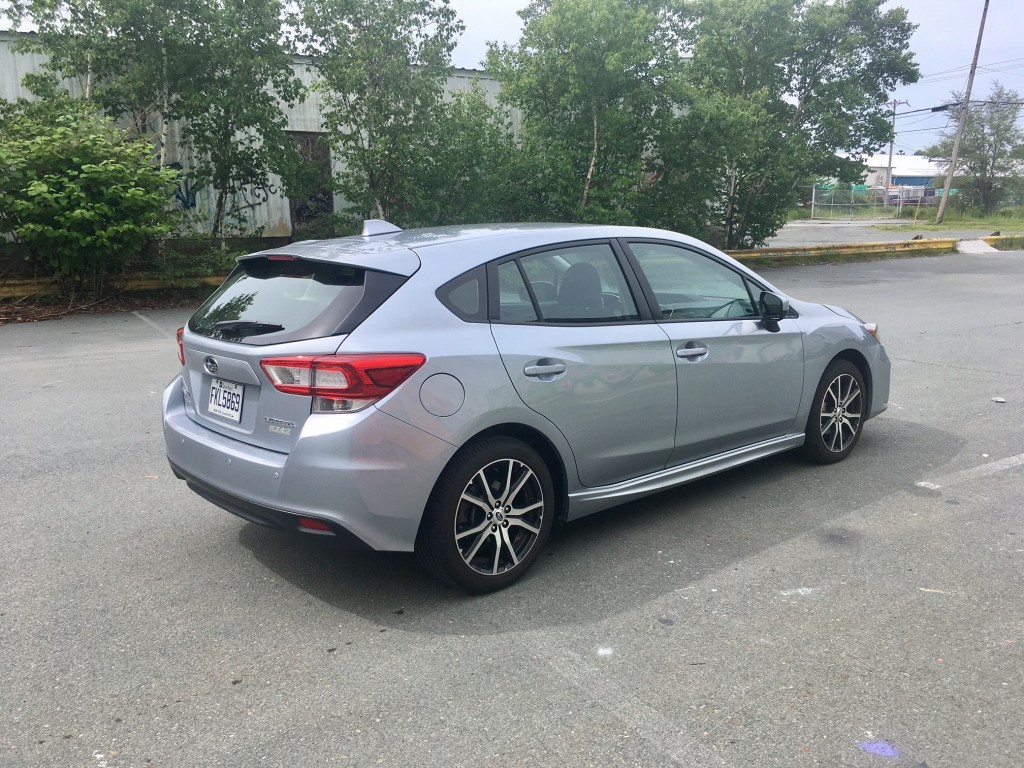 Even though the competition may offer more power, the Subaru has something none of them have: all-wheel drive standard. That’s right, if you want all-wheel drive and hate the idea of owning an SUV (good on you if you think that way), then you should get your keister to a Subaru dealership because every single model, save for the spritely BRZ, comes with all-wheel drive as standard. And while the system isn’t noticeable in every day driving, you’ll certainly notice it in the rain and the snow – and in a good way.

All-wheel drive does mean that you’ll take a bit of a penalty at the pumps, but not by much. The Impreza is still rated at a decent 8.4 L/100 kms city and 6.5 highway. With mostly city driving, I unfortunately got nowhere near the city rating. My week of driving returned 9.1 L/100 kms. 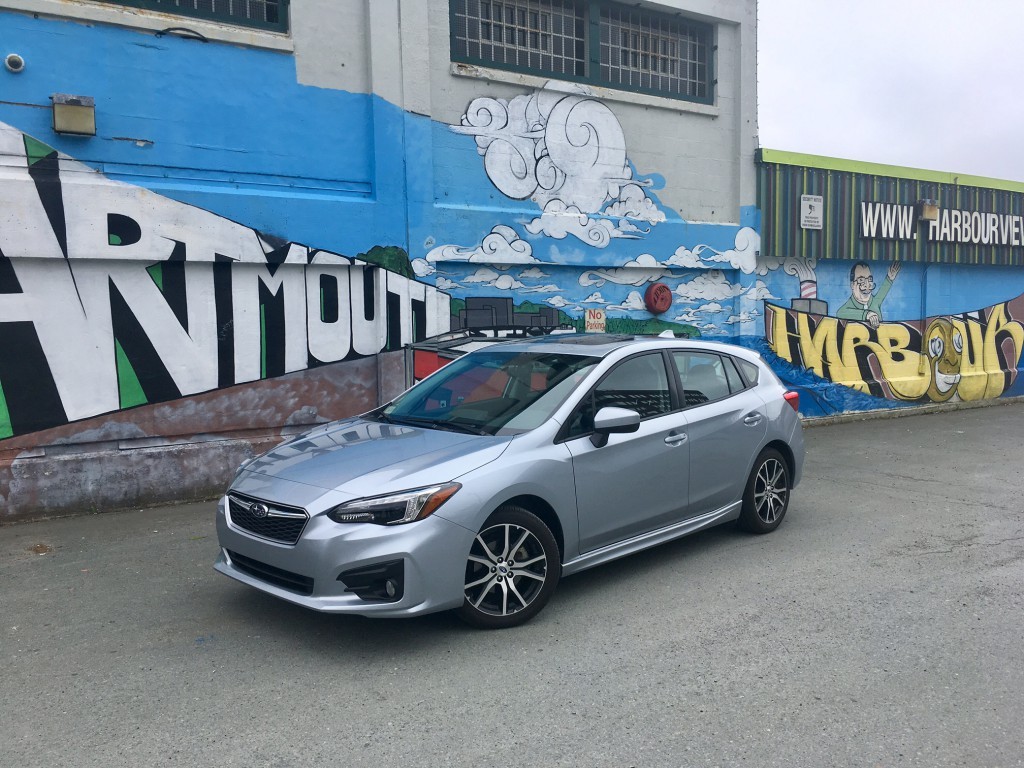 But that’s a small price to pay for a little car that has all-wheel drive, a pleasant interior, great road mannerisms, good interior room and cargo and style. And if you are the type who still thinks you need more height in the form of an SUV, Subaru offers the Impreza with a jacked up ride hight called the Crosstrek. There’s also the Forester or the Outback.

One thing is for sure, Subaru is serious about being a mainstream challenger to the heavyweights. And if the Impreza is any indication, they should be on their way to long-term sales success.