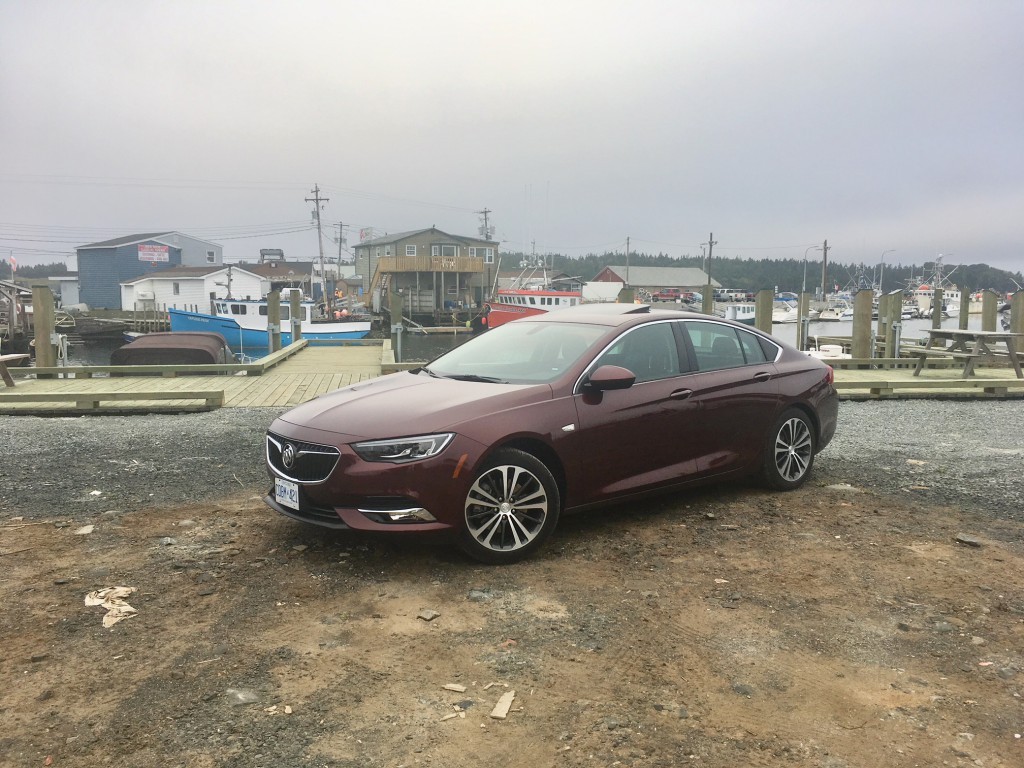 When Buick announced they had a new next generation mid-size Regal sedan coming soon, a lot of us who follow the automotive industry were a bit surprised.

Our shock wasn’t over the design or over a particularly notable feature. It was the fact that for the first time ever, the Regal wasn’t a sedan at all. It was a wagon.

North Americans don’t seem to like wagons for illogical reasons, so to make the Regal a wagon was a bold move. However, in any event, we Canadians are forbidden from handing our hard earned cash over for a Regal wagon. Buick Canada opted not to sell it here.

So if there’s no Regal sedan anymore and we don’t get the wagon, what exactly do we get?

Well, there’s another version of the Regal that is brand new to the nameplate too: a sportback. And it’s what Buick Canada is hoping Canadians will buy into. 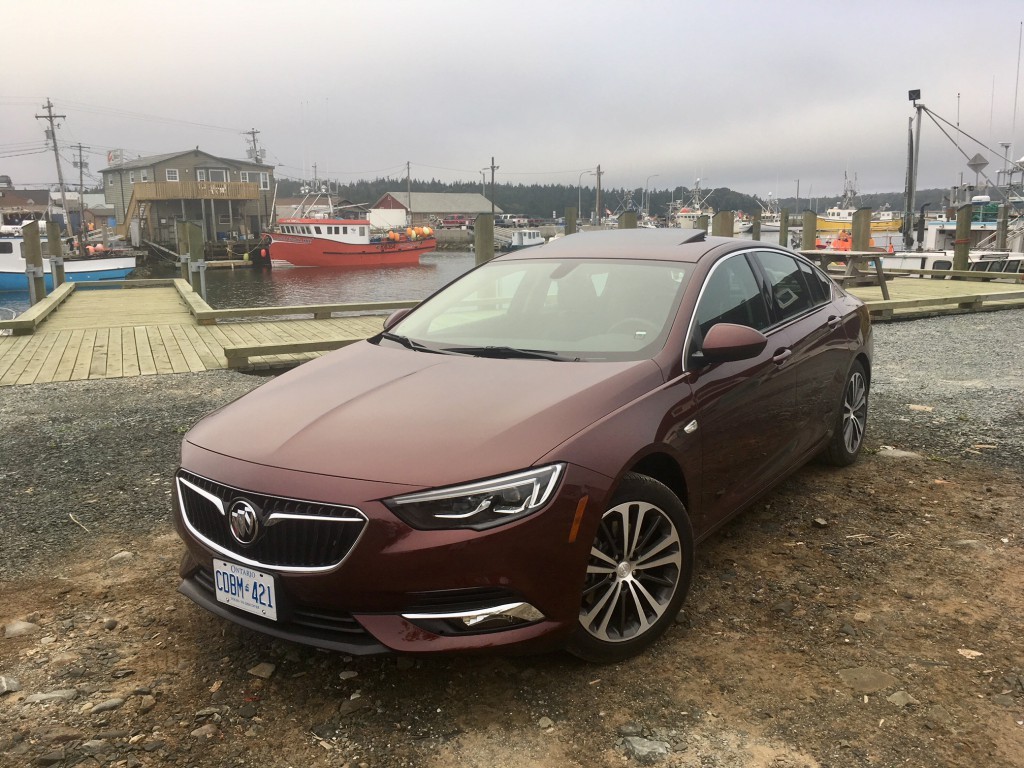 And before we move on to the Regal Sportback’s worth, let’s talk about how it doesn’t even look like a sportback at all. You’d be forgiven if you thought this was the newest iteration of the Regal sedan. It really isn’t until you open the cargo area (which is cleverly done by simply pressing the Buick symbol in the rear) until you realize that the rear glass indeed rises with the deck lid making it a full on sportback design. And is it ever a pretty thing in general. My tester was the Essence trim, which is the highest trim available aside from the high performance GS trim. Visually, that means 18-inch wheels, LED headlights and a unique grille. But in any trim, this new European inspired design certainly turns heads; a feat most Buicks have traditionally not been able to do. Well done to the designers at GM. 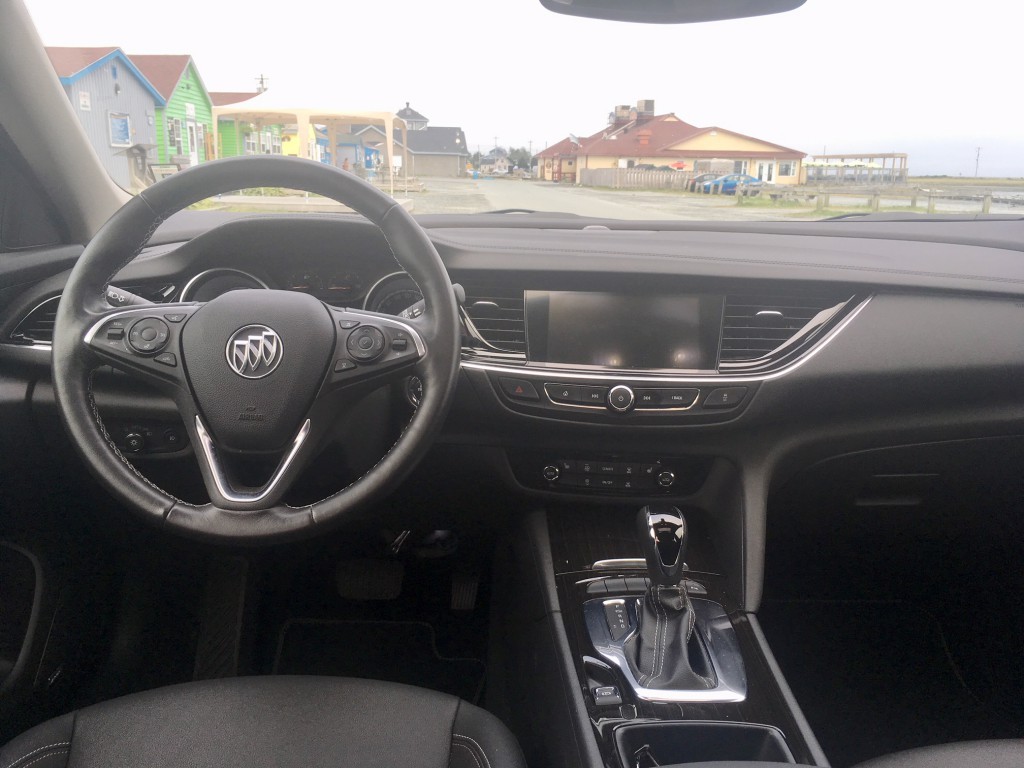 (One thing that has been bothering me with higher end GM models lately is that they’ll give you LED tail lights, but you get regular incandescents for the brake lights and turn signals, which is the case for the Regal. If you’re going to ask premium pricing then at least make premium lighting optional, if not standard). 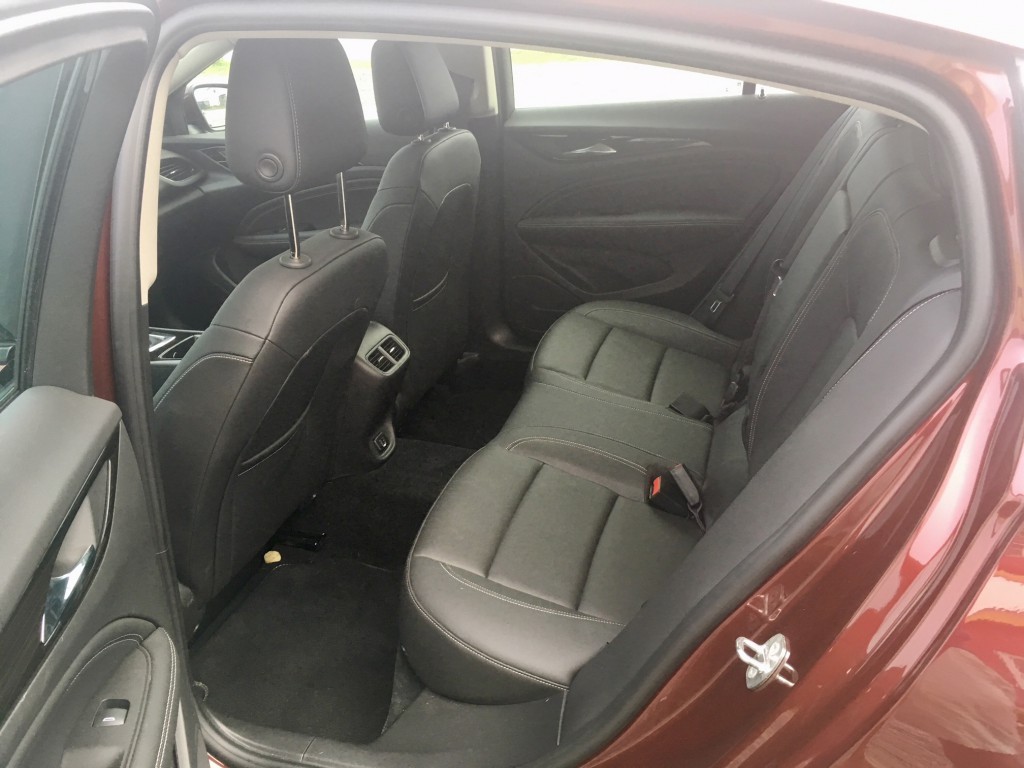 Inside is a tastefully designed cabin which exudes a premium look and feel, short of being full-on luxury. One of my favourite aspects of the interior is the centre stack which not only looks great but is placed closer to the driver and is angled the same way too making it a synch to use the rather decent infotainment system. GM’s latest iteration of that system continues to impress with his clarity of design, relatively quick response time and zero lag. 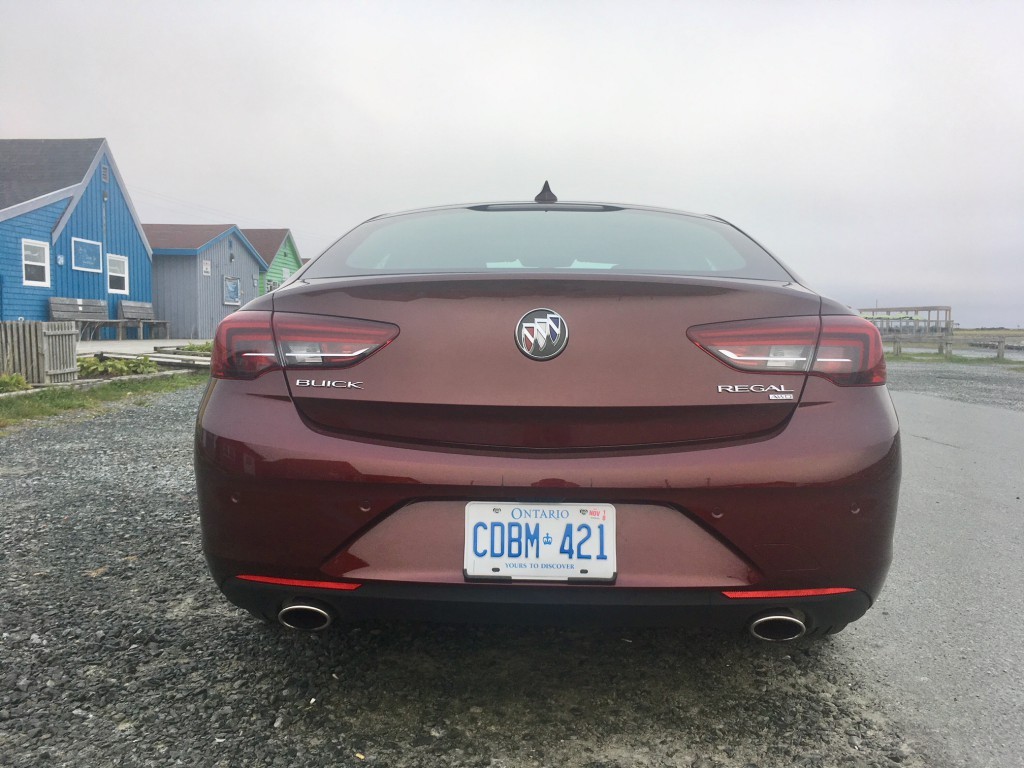 Being a Buick, interior cabin noise is virtually non-existent. Buick prides itself in having this reputation, so lots of sound deadening is packed in to make sure any road, wind or engine noise doesn’t make its way into the cabin. The Regal is the only Buick in the lineup that uses tires (Continental ContiSilents to be exact) which are lined with foam inside for increased noise reduction and comfort. It’s not something most people would ever really consider when buying a new car, but once you know special effort has been made to keep the cabin quiet, it is indeed noticeable, especially when you step foot into literally any other vehicle that isn’t a Buick. Nicely done here, GM. 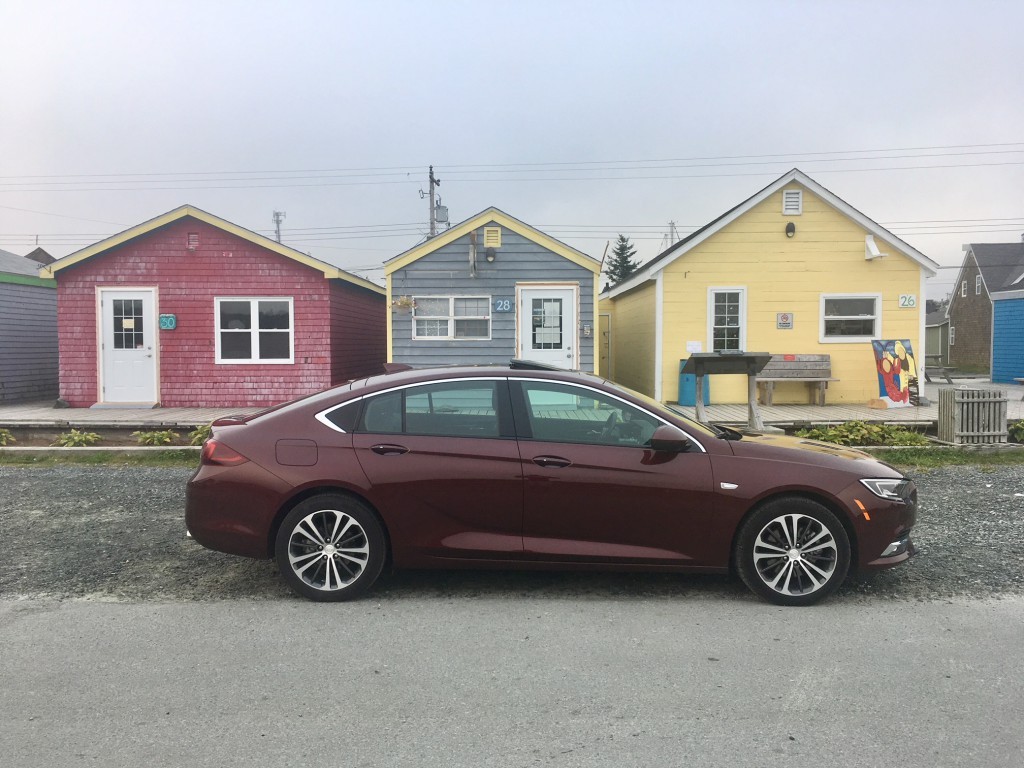 The other big part about the interior is the sheer space. It may prove slightly difficult to get in and out thanks to the four-door-coupe-like design and its low stance, but once you’re in – and seated in anywhere in the vehicle – you’ll find yourself with good amounts of head, foot and leg room. As is the case with most passenger cars, you’ll want to be sure to have rear centre seat occupants for shorter drives only. 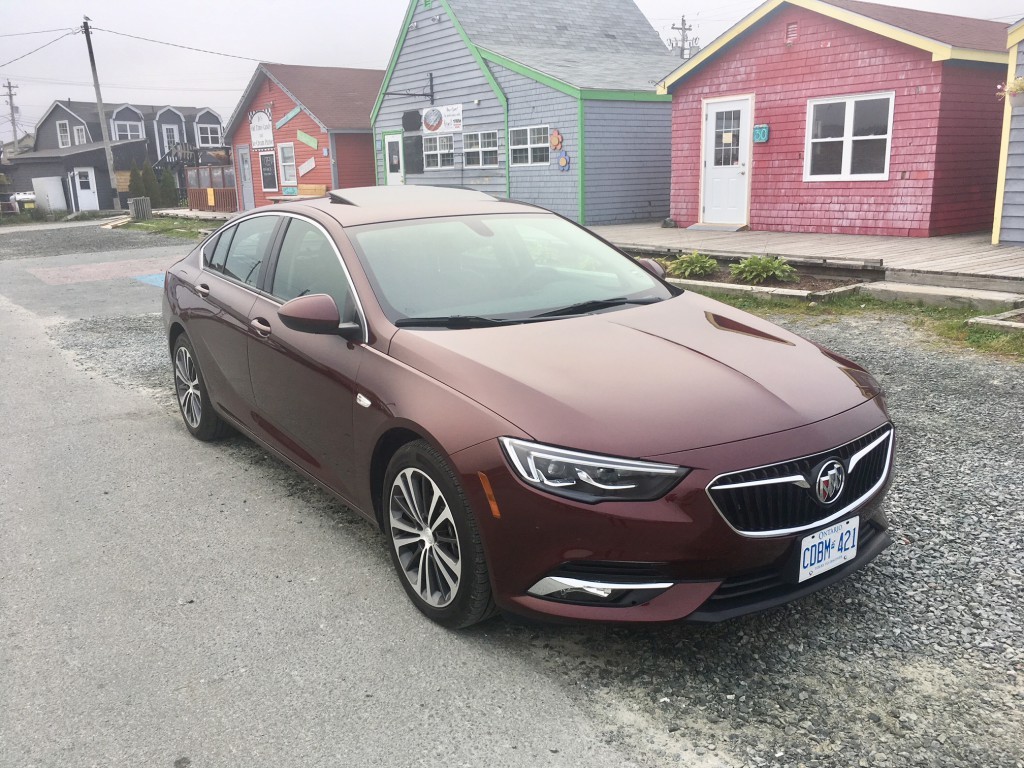 But the real story inside is how much cargo room there is, thanks to that sportback design. With the rear seats up, you’ll find yourself with close to 900 litres of cargo room. Fold those rear seats down (which are 40/20/40 split, by the way) and you’ll find yourself with over 1,700 L of cargo space. To put that into context, it means that Regal Sportback will easily swallow a pair of bicycles, lumber from Home Depot, or all your ski gear with some room to spare. It certainly proves that with a sportback design, buyers can indeed have their cake and eat it too. 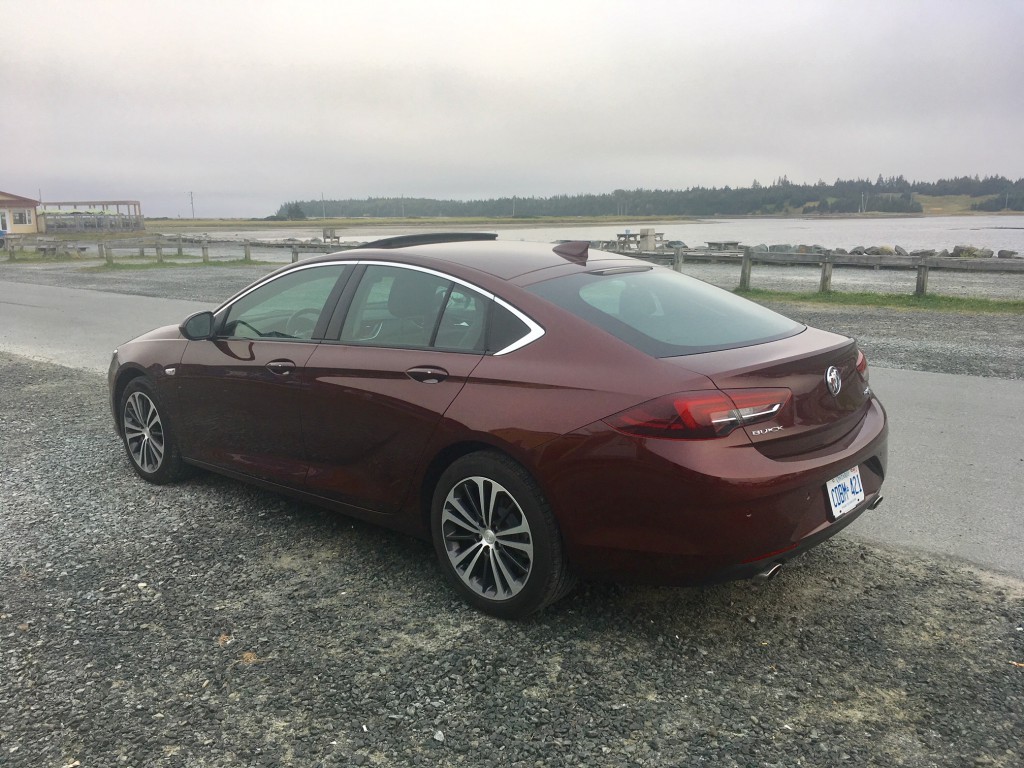 The new Regal Sportback has two engine choices available: a 3.6 litre V6 reserved for the performance oriented GS trim and a 2.0 litre turbocharged four cylinder good for 250 horses and 295 pound feet of torque. This engine can be mated to all-wheel drive or front wheel drive, but the latter is limited to the base trim only. It’s interesting to note that if you do opt for front-wheel drive then you’ll get a nine-speed automatic. If you opt for all-wheel drive (which I suspect most Canadians will) then you get an eight-speed automatic instead. 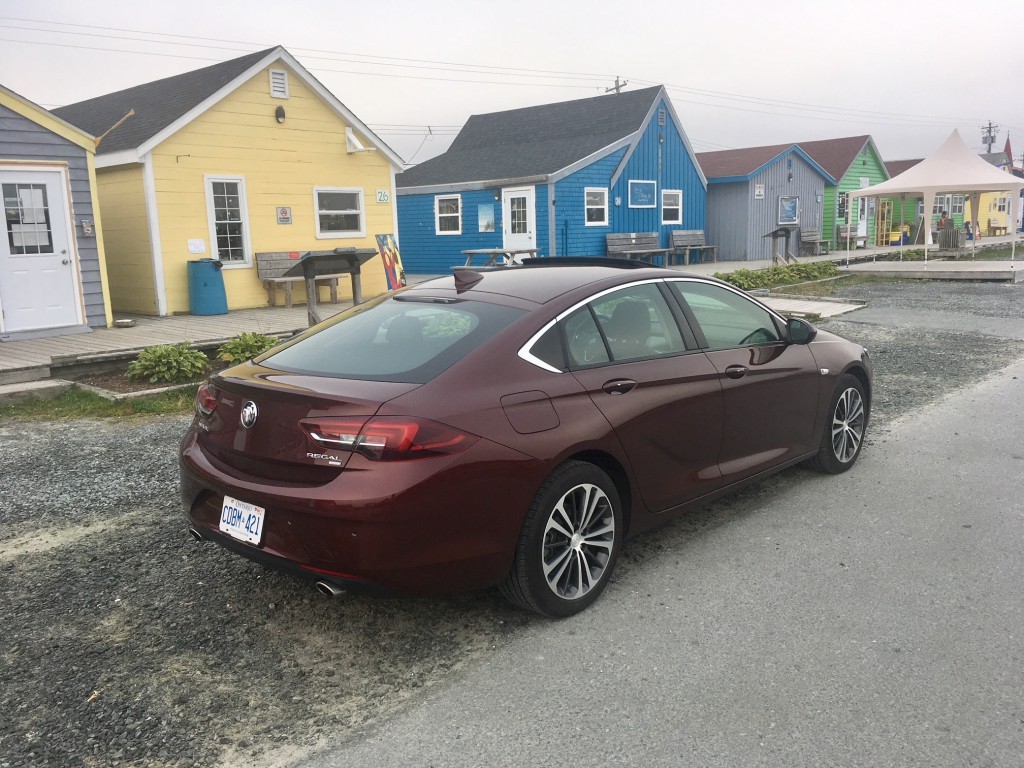 On the road the first noticeable thing is how un-Regal like the drive is, meaning this new Regal feels tights, responsive and willing to be pushed in the corners. Regals of yesteryear prioritized comfort and coddling ahead of raw performance, but this is no longer the case. I would imagine the GS to be a fantastic performer in the bends if the regular Essance model is any indication. Even with those silence-centric tires, the Regal can still hold its own when pushed, though it should be noted that it can start to suffer from understeer if you go too hard. The eight-speed does a good job of staying out of the way for normal driving, but it does impede a but when you are driving more spiritedly as shifts aren’t as precise and sharp as I’ve experienced in other performance sedans.

The engine itself is decent largely thanks to the oodles of torque that are all-too-happy to slingshot you forward should you need more passing power or have suddenly turned into a drag racing character from The Fast and the Furious. Again, the transmission has some slight lag, but overall the Regal won’t let you down if you need to get somewhere in a hurry. 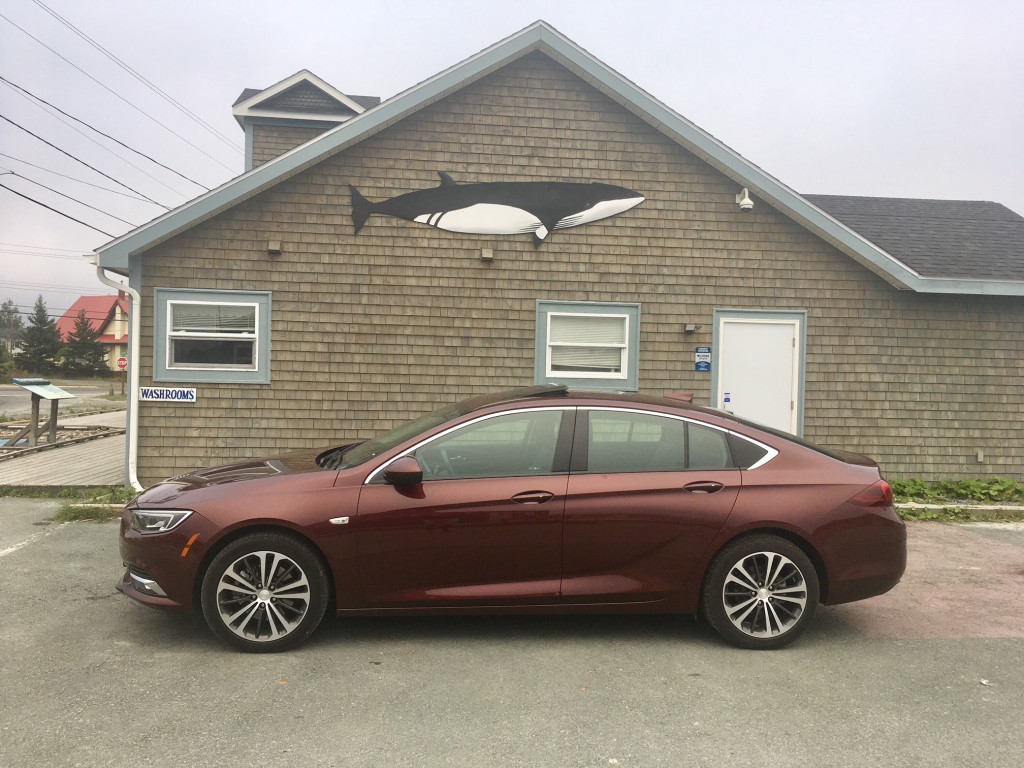 Official fuel consumption figures come in at 11.0 L/100 kms in the city and 8.0 highway. After a week of mixed driving I returned a rather surprising 12.4 L/100 kms. I can’t offer much of an explanation for why this figure is so far off from the official numbers. I only really pushed the Regal a couple of times to test out its performance credentials, the rest of the time I was content enough to let the Regal coddle me on the road thus inducing a more relaxed driving style. The Regal even comes with standard stop/start engine technology which cuts the engine off at a red light, for instance, and then automatically turns the engine back on once you’ve taken your foot of the brake. The obvious benefit would be to save even more fuel, but this didn’t seem to help out at all. The weight of the all-wheel drive system could play a role here, but overall I am fairly dumbfounded as to why I couldn’t return anything close to the official figures. And to highlight just how shocking its fuel consumption is, I was able to return 12.7 L/100 kms in my recent test of the behemoth known as the Chevrolet Suburban which sports a growly 5.3 litre V8. 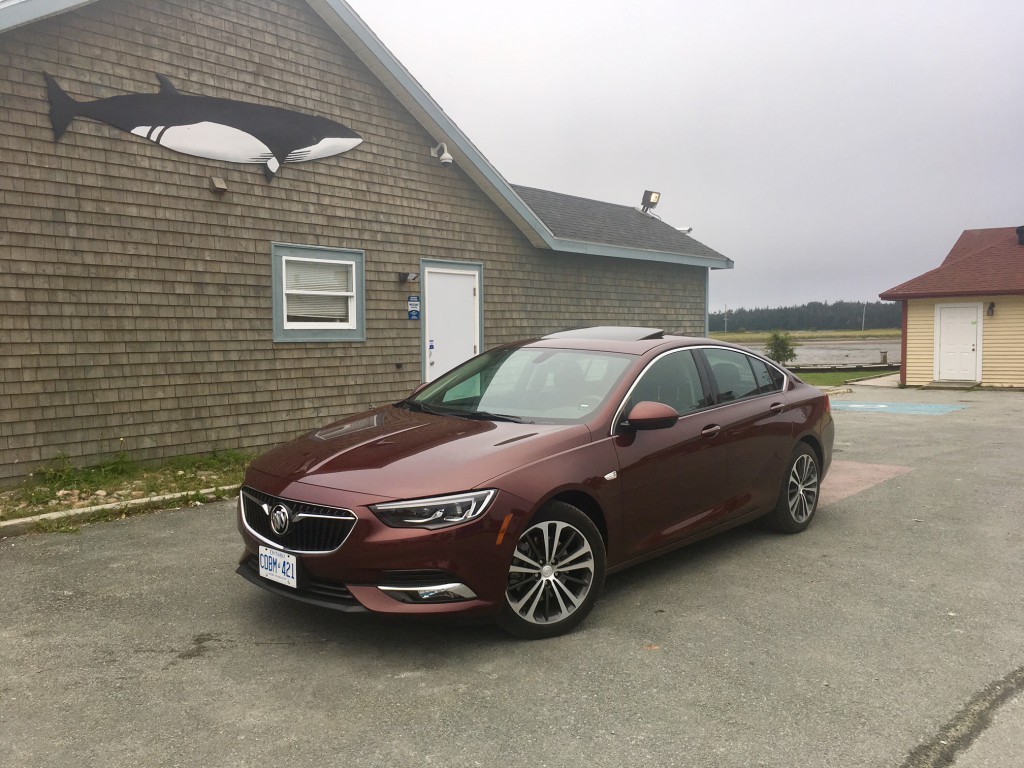 Odd consumption figures aside, the new Regal is, without a doubt, the best version of itself yet. While I’m a bit butthurt that we are not allowed to have the wagon version, but turning the Regal into a sportback is just as good. If you’re looking for a quiet, comfortable ride that is willing to play in the corners every now and then, the Buick Regal is worth a spot on your test drive list.