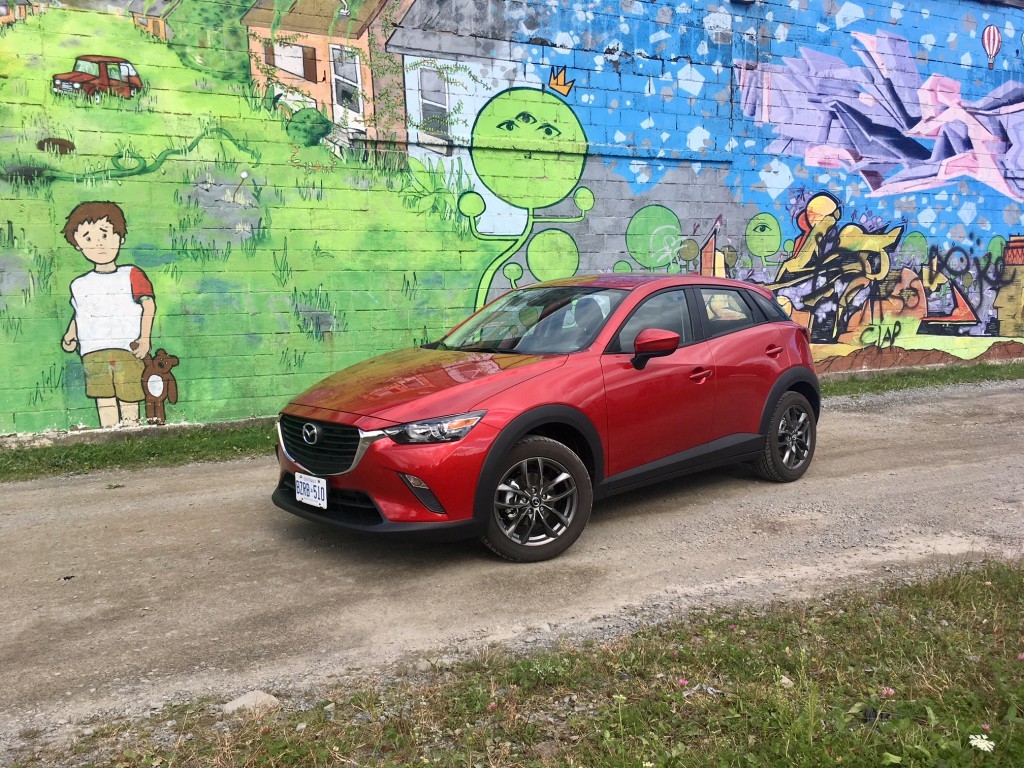 I often like to go for long walks, not only to clear my head and get a little bit of exercise, but also to do some car-watching. Most people like to people-watch, I car-watch.

I mostly do this because I have an obvious affinity for cars, but I also like to get a real world idea of the types of cars people seem to purchase the most. As you can imagine, I can’t go for a walk without seeing at least five Honda Civics (usually many more). Corollas are also popular and so are both versions of the Mazda3.

But another Mazda I’m starting to spot more often is the Mazda CX-3. You’ve likely seen a few around too. The sub-compact crossover is certainly doing its fair share to keep the brand going.

Indeed, the sub-compact crossover segment is booming which is interesting because it’s a relatively new segment.

As the CX-3 was one of the first to enter the fray, Mazda Canada decided to introduce something new for 2018, and joy of joys, that new thing just happens to be a manual transmission! 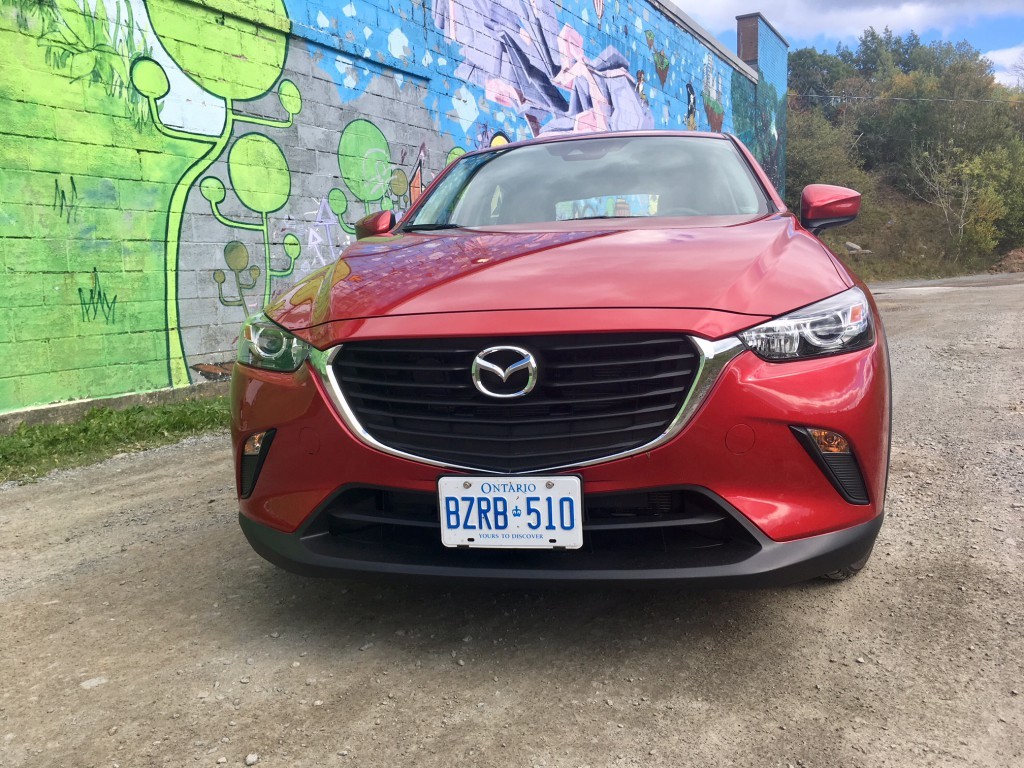 Not only does it keep old school purists like myself happy, but it also allows Mazda to drop the base price of the CX-3, which now starts at just under 20 grand.

It should be noted, however, that the availability of a manual transmission is limited to the base model. And if you want the manual, then you are also limited to front-wheel drive in base model form. It’s interesting because the manual transmission in the CX-3 is only available in Canada – the USA doesn’t get it. But most Canadians want all-wheel drive due to our harsh winters. Why can’t we have the manual with all-wheel drive? Subaru finds a way to do it, just sayin’.

It’s frustrating that automotive companies are limiting three pedals to the entry level models, but in this day and age, you take what you can get. Mazda Canada was at least kind enough equip my tester with decent looking 17-inch wheels from the accessory list, which makes it look less like a base model. They also fitted it with navigation, and an arm rest for the driver. That’s right, an arm rest is a $330 option. I’ll get to that in a moment. 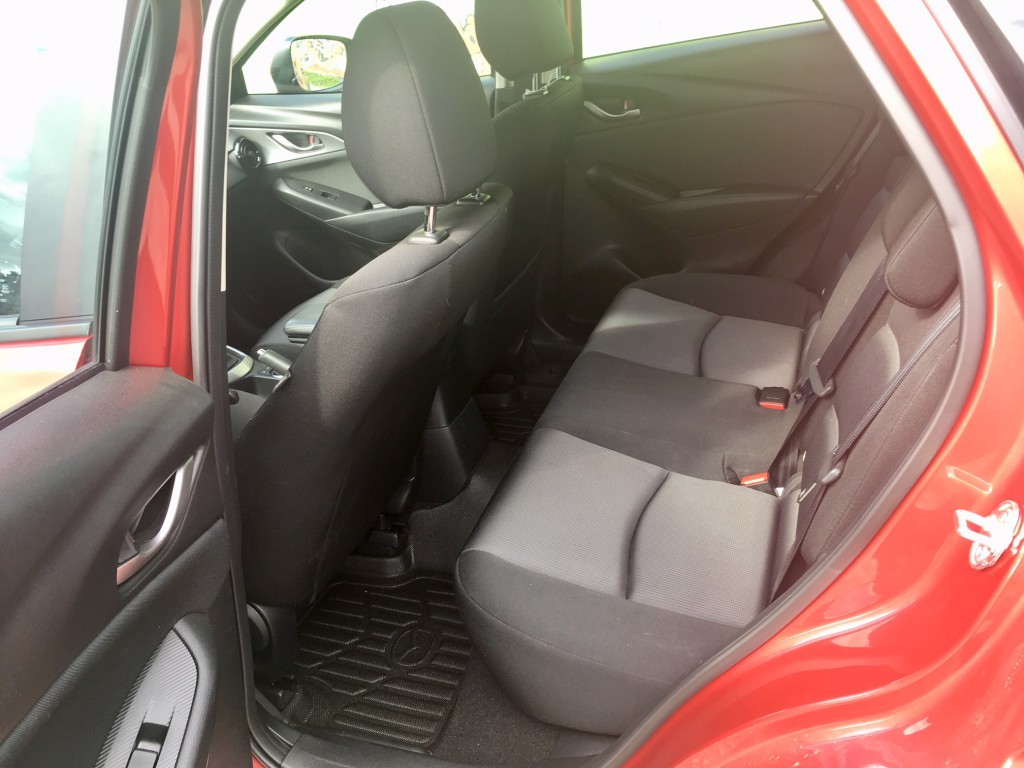 The CX-3 originally gained popularity for its dashing good looks. It doesn’t look like a typical crossover with its long hood, low roofline and overall curvaceous shape. To my eye, it looks like a raised hatchback, much in the same vein as the Subaru Crosstrek. Those hoping for a more rugged CUV look and who are not sold by simply adding some body cladding, will have to turn to competitors like Honda or Mitsubishi, but suffice to say, the CX-3 is a looker from almost every angle.

The CX-3 continues Mazda’s streak of designing impressive interiors, even in base form. The infotainment screen which is placed on top of the centre stack looks premium despite its smallish size and the knob located between the two front seats to control it conveys the same, as do the quality of materials (again,even for the base model). 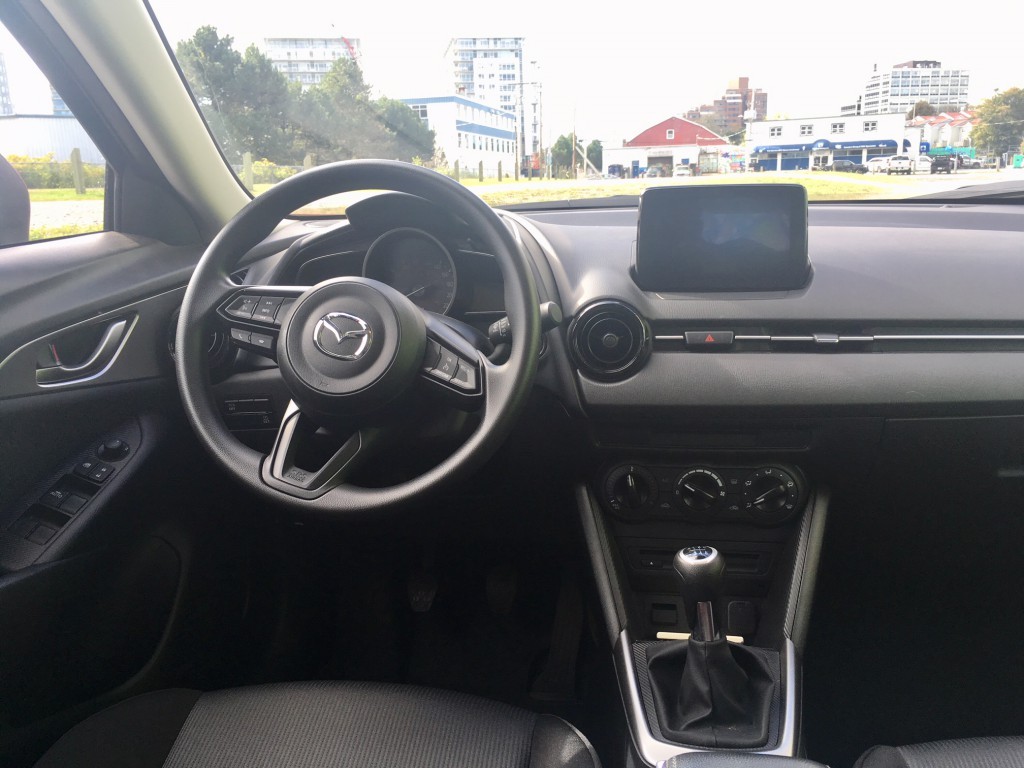 But let’s get back to that optional arm rest. As much as it is appreciated for long distance driving, I found it got in the way when trying to access the aforementioned infotainment knob or the volume button located next to it. On top of that, it gets in the way when you are shifting gears. I don’t remember this being an issue when I first drove the CX-3 in top GT trim a couple of years ago, but that could be because that tester was an automatic, so there would have been less opportunity for me to even notice. 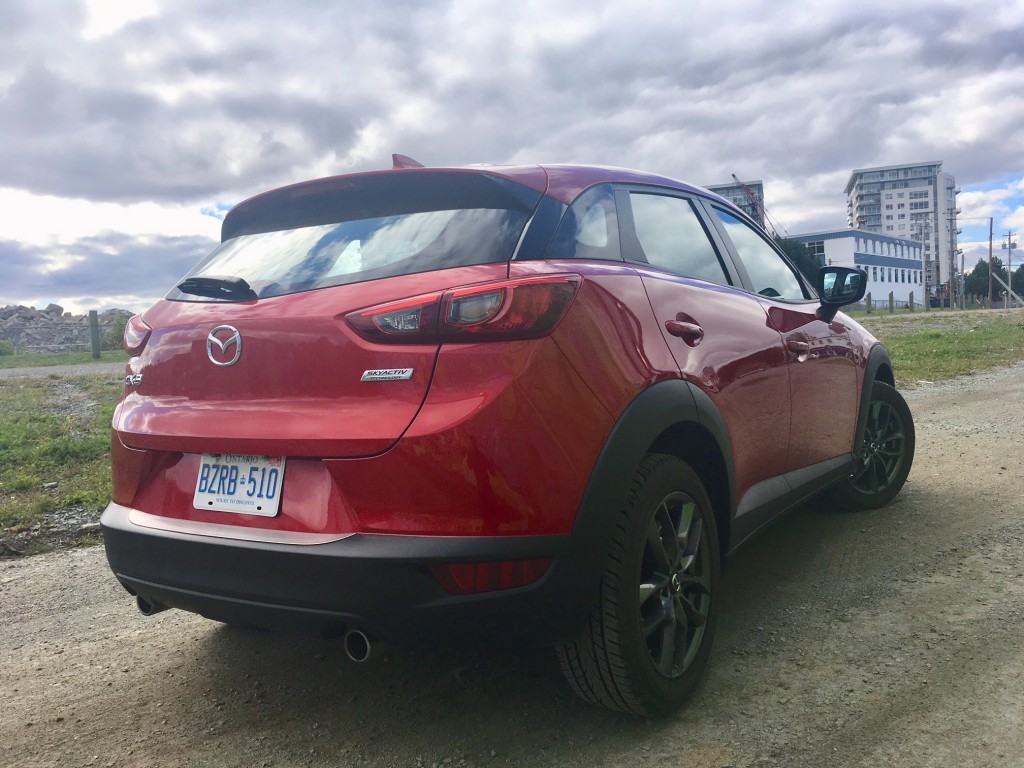 Interior space is not a strong point for the CX-3. There’s actually less interior room than in the Mazda3 hatchback and it’s noticeable. While the high belt line increases exterior style, it makes the CX-3 feel more claustrophobic inside. That isn’t to say the CX-3 can’t hold people and cargo, it’s just a tighter squeeze for both when compared to its direct competition.

For 2018 the 2.0 litre four cylinder inline four carries over as the only engine option. It produces 146 horses and 146 pound feet of torque. As mentioned, you can now get the six-speed manual in the CX-3’s absolute base form, otherwise you’ll be getting a six-speed automatic. The end result is a relatively modest engine that can be brought to life more easily with a mere shift of the gear lever. This allows you to access higher RPMs more easily, making the three-pedaled CX-3 feel a bit more engaging to drive. The stick shift won’t transform it into a 5.0 litre Mustang, but it certainly keeps the driver both happy and on his or her toes. The shifts are typical from Mazda, that is to say they are near perfect, and clutch feel is on the lighter side, but easy to get used to. 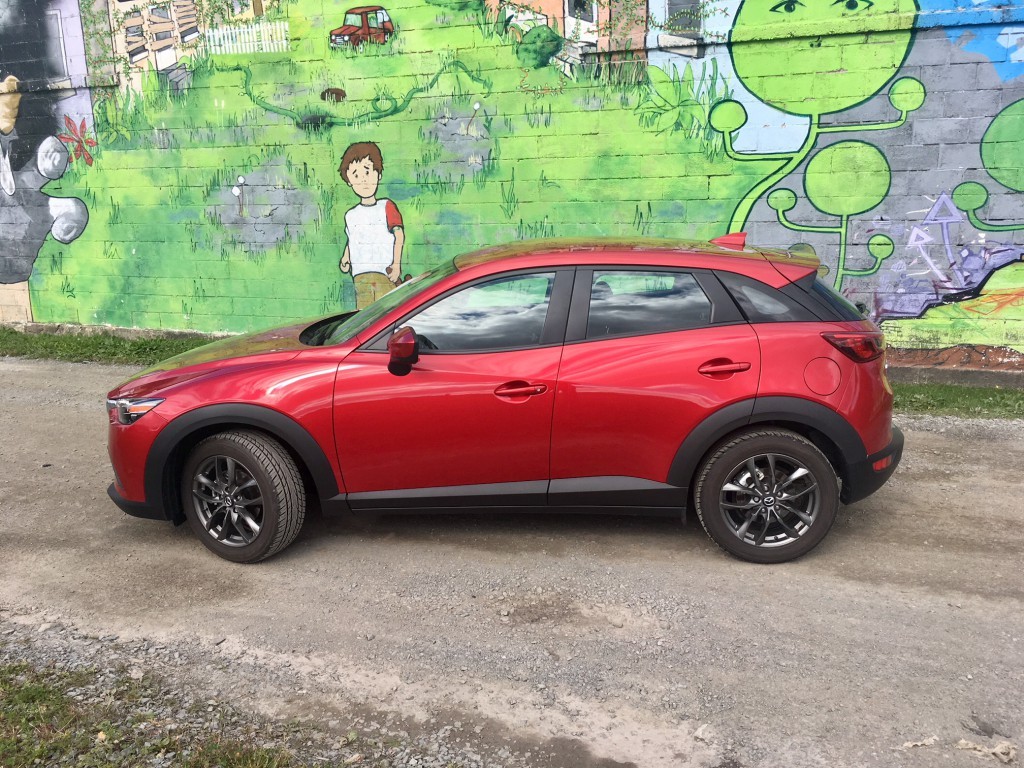 The CX-3 offers a mild increase in ride height, but not enough to really offset any sort of handling abilities (it’s less than an inch increase, to be exact). That means the CX-3 won’t be the off-roading star you might expect it to be, especially in this specific trim with no AWD, but that doesn’t mean that it cowers away when tasked with some mild off-roading. Truly, the CX-3’s abilities still excel on the pavement. It is, by far, the best corner carver, of the sub-compact group. Despite the slight increase in ride height, it remains decently composed in the bends and having the slick manual only enhances the dynamism. 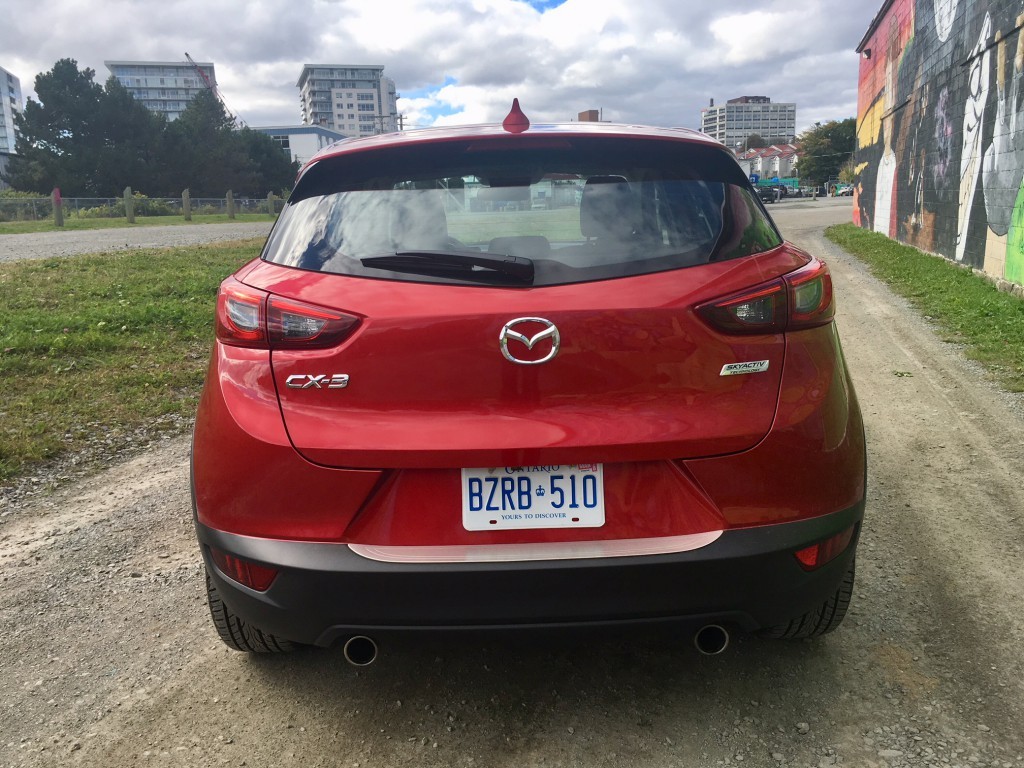 The downside of that slick manual lies within fuel consumption figures. A CX-3 with the automatic and all-wheel drive is still more frugal on gas. The front-wheel drive with automatic gets the best figures, rated at 8.2 L/100 kms city and 6.9 highway. The AWD version with automatic comes in second best for city efficiency at 8.8 city and 7.5 highway. Then comes the front-wheel drive manual rated at 9.0 city and 7.0 city (yes the manual does better than the AWD automatic in the city). With all that being said, I returned a combined rating of 8.0 L/100 kms. That handedly beats out the official ratings so if fuel efficiency is a factor for you, and may be the reason why you opt for the automatic, keep in mind that real world efficiency with the manual could be better than the stated numbers. 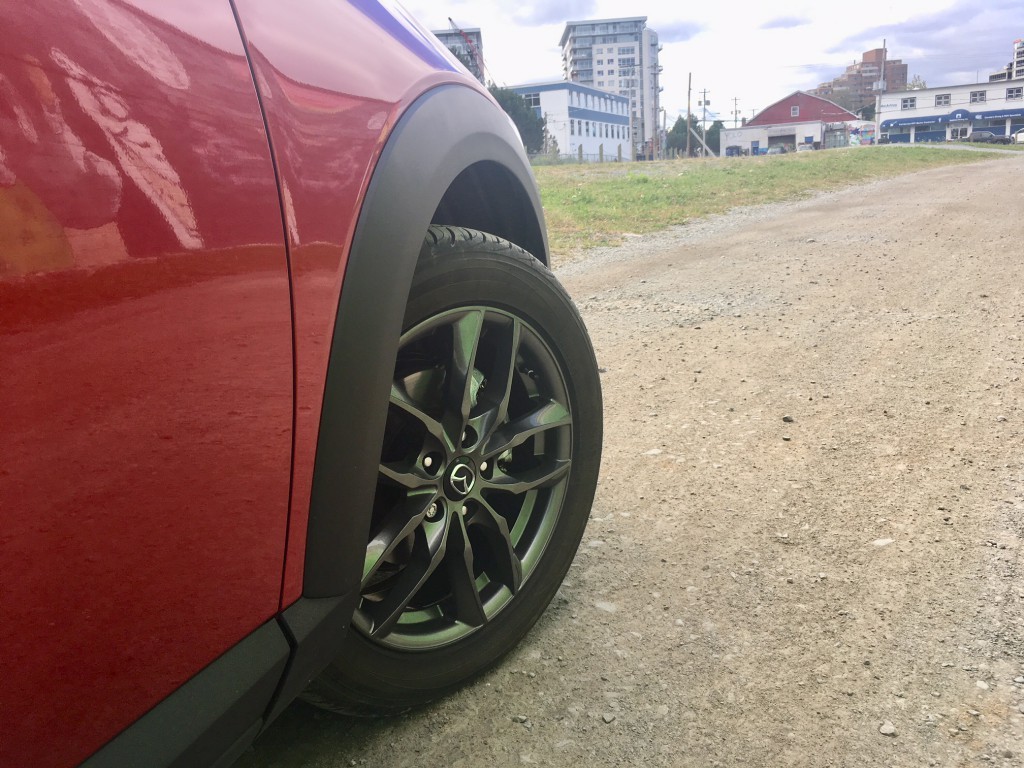 The CX-3 has always been an interesting vehicle within the segment. It tops its rivals for driving dynamics, and arguably in terms of interior and exterior style, but it comes up short for interior space. The manual is only available in front-wheel drive but that might be something that could be overlooked given how much more engaging it is to drive with three pedals. Then again, if AWD isn’t going to be a factor, the Mazda3 hatchback is just as fun to drive, if not more with the higher power output and lower ride height, not to mention more interior space.

Regardless of which you choose, the ‘zoom zoom’ factor is always constant. 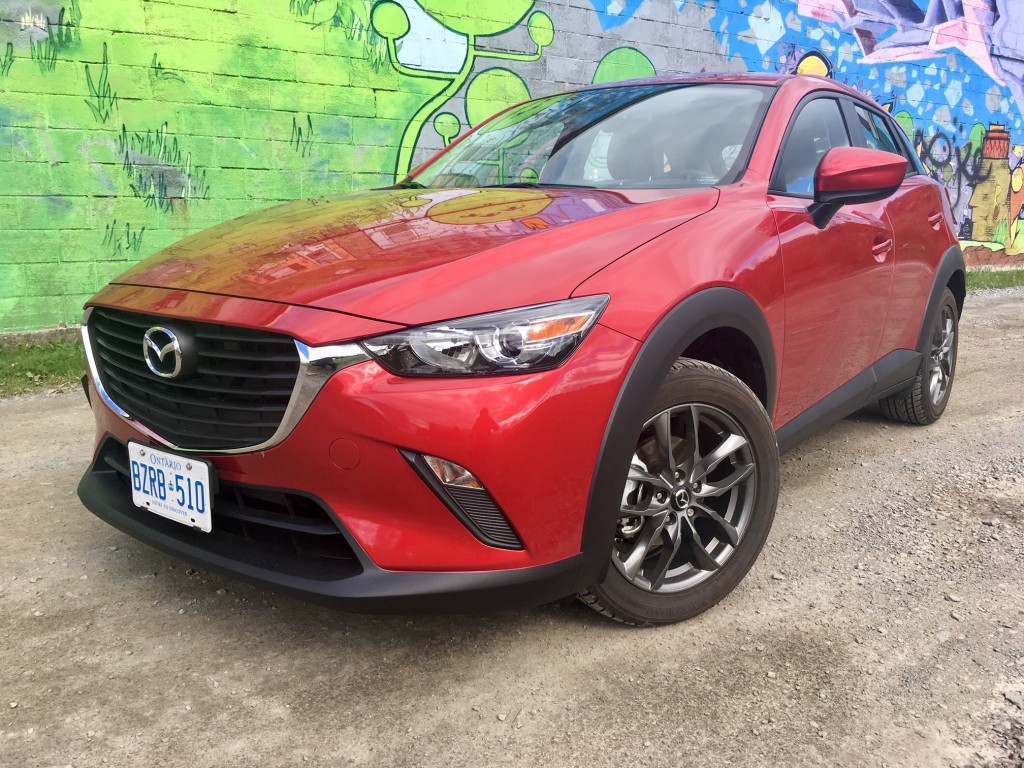