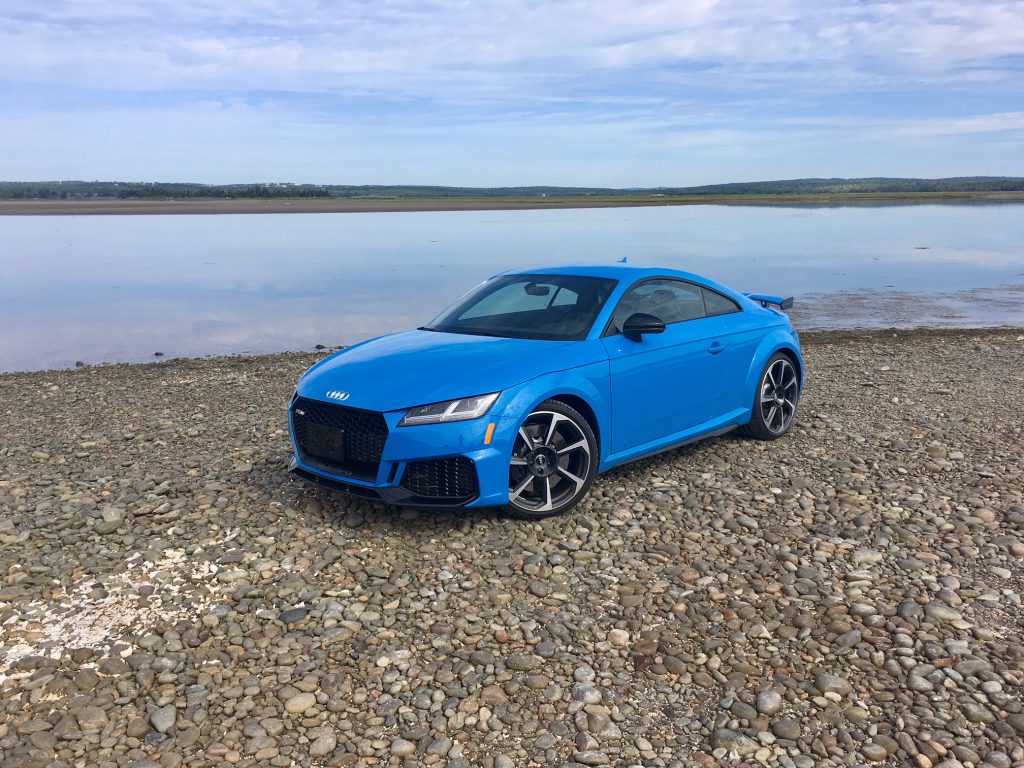 They said we needed something borrowed and something blue.
Thanks to Audi Canada, we had killed two birds with one stone on the week of
our wedding day.

If you are an avid CarDriven.ca reader (and thank you if you
are), you might know that the Mazda MX-5 is a special car to my wife and I. It
was there for many milestones throughout our relationship.

But while the MX-5 certainly can get the emotional juices
stirring, Audis have always been a favourite of my wife and she always gets
giddy when I tell her the press car I have for the week is sporting four horizontal
rings on the steering wheel. The TT specifically, has been there for a couple
memorable moments, not least of which was the time we
used a TTS as our chariot to get us from Dartmouth, Nova Scotia to the
Confederation Bridge in PEI. We were running (alright, alright, I walked, she
ran) in memory of my wife’s younger sister.

So I’m a bit sad to learn that – as my wife and I continue our journey happily together in holy matrimony – the TT’s 20 year journey appears to be coming to an end. Rumours have been swirling for a while now of the TT’s demise, and with either radio silence or quiet nods of confirmation from Audi, the rumours appear to have some meat to them.

That’s a shame for a multitude of reasons, not least of which is due to the fact that there is nothing that looks like the TT on the road today. Alright, you could argue that the TT’s big brother, the R8, bears some resemblance but that’s certainly not a bad thing. It’s difficult to make tiny cars appear muscular, intimidating and brawny. Just ask the aforementioned MX-5 which has been battling a reputation of being a “girl’s car” (whatever that means) since its inception. The TT, especially in my tester’s enhanced RS trim, does a good job of looking menacing in the rearview mirror. With a large black mesh grille as a part of the black optics package, along with matching black trim elsewhere on the body, including the large dual exhaust tips, the TT RS shows it means business. And the fixed spoiler along with optional 20-inch wheels, and big brake calipers let’s everyone know this isn’t your run-of-the-mill TT. My tester’s Turbo blue paint not only helped it to stand out a bit more, but it conveniently did a pretty good imitation of one of our official wedding colours. Nice!

You may need to duck a bit to get in, but once you get your frame inside, you’ll immediately notice that the TT RS’s interior design is very much driver focused. And if that’s not the first thing you notice, the lack of any sort of screen on the dash is likely to grab your attention too. That’s because everything that would typically be on an infotainment screen is housed behind the wheel thanks to Audi’s virtual cockpit which essentially takes up the whole instrument cluster. It is completely configurable to your liking, but it also means that your passenger would have a hard time cycling through radio stations, even though the knob which controls that function is placed right next to the passenger.

The dash itself is angled towards the driver and many of the buttons are straight forward and logically laid out. One thing I’ve loved ever since this generation TT debuted is how they cleverly housed buttons in the centre of all five air vents. You can control climate or heated seats through these buttons and they blend in seamlessly.

As much as my wife and I enjoy the MX-5, she really does not like small cramped interiors which is something she always points out when we drive an MX-5. She doesn’t like feeling as if she’s in a tiny car. Yet even though the TT is a tiny car, it doesn’t feel so inside. That becomes a lot less true if you make any attempt to use the rear seats (which are honestly best used as a storage area), but the TT RS is much more versatile than you’d expect. If you flip those rear seats down, you get a vast, albeit shallow, cargo area thanks to that sloped hatchback design. Specifically, you’ll net over 700 L of cargo room which is seriously impressive for such a tiny car. In fact, on the day of our wedding, I put the TTRS to work loading it up with decorations, food, and of course, alcohol. It did a good job of swallowing up a good portion of stuff we had to transport.

Being the most expensive and powerful TT you can buy, the TT RS gets a 5-cylinder turbocharged 2.5 litre engine. Believe it or not, power is actually down a bit for 2019, but the 394 horses along with 353 pound feet of torque is certainly still a lot by anyone’s standards. All that power is mated to a slick 7-speed DSG transmission which can be operated manually via the gear lever, or the admittedly rather flimsy feeling paddles mounted to the steering wheel. The end result is a little rocket that rivals 0-100 times of big brother R8. Seriously, if you do it properly, you can launch the TT RS to 100 in about 3.7 seconds. Not only does that make the TT RS a credible track star, but it also does so for literally half the money of the R8. That’s a pretty good bargain.

And if you’re a bit uncertain due to that 5-cylinder, don’t be. Not only does it deliver a performance laden punch, but it still sounds the part. The growl of the 5-cylinder is only amplified by the optional sport exhaust. Is it strictly necessary for $850? No. Did I make sure to hit the sport exhaust button 90% of the time? Yes. It’s such a unique sound that you just want to hear more of it. Which is a bit of a shame for the rather nice sounding stereo system, because I also found myself preferring the musical symphony of the 5-cylinder over any music at all.

On the road, as you’d expect, the TT RS will take any corner and eat it for lunch. The steering is supremely quick and responsive and the body is planted and composed. That’s largely true for any drive mode, but if you put it in dynamic mode, the TT RS will show you what a true performance car is supposed to feel like. My wife is not a huge fan of overly firm suspensions so I was a bit worried placing her in a vehicle that could jostle her about, but even in dynamic mode she wasn’t too bothered. She preferred comfort mode, but I didn’t get an earful when I kept it in dynamic mode for the hour drive to her family farm the day after our wedding.

And speaking of, the TT RS certainly drew a crowd from country folk who usually flock to brand new pick-up trucks or classic muscle cars. It’s not usually their cup of tea, but they were politely intrigued anyhow.

But on the twisty rural Nova Scotia roads – some often unforgiving – the TT RS proved it could be an easy daily driver. The Quattro all-wheel drive system would suggest that it can be driven year round as well. And since there’s only a 5-cylunder under the hood instead of a brawny V8, fuel consumption figures come in at 12.0 L/100 kms city and 8.3 highway. By the end of our wedding filled week, I was averaging a fairly decent 9.8 L/100 kms.

So, not only did the TT RS step up to the plate for what was the most special moment of my life to date, it did so in many unexpectedly accommodating ways. It’s comfortable despite the large wheels with tires painted on and the firm suspension, is relatively good on gas, can go like stink, will hug any corner with confidence, has pretty good versatility, looks unique and doesn’t feel claustrophobic inside. It can also be driven year round.

It’s such a well-rounded vehicle that despite how happy my
wife were on our special day, I couldn’t help but feel a bit melancholy thinking
of the TT RS’s demise. Here we are embarking on a new and exciting chapter in our
lives – one we would both love the TT RS to be a part of someday – but it’s
taking its final bow as we begin our bright future together.

The TT RS, especially in Turbo Blue, was the perfect wedding car. And I’d wager to say it would be among a perfect car for someone like me considering its performance credentials and daily livability.

But as consumer preferences continue to shift to SUVs for
some reason, really good cars like the TT RS will be the ones that take the
fall.

Thanks to the TT RS for proving what a truly great car
should be and for adding onto what was truly a special day in the life of my
wife and I. You will be truly missed, old friend.