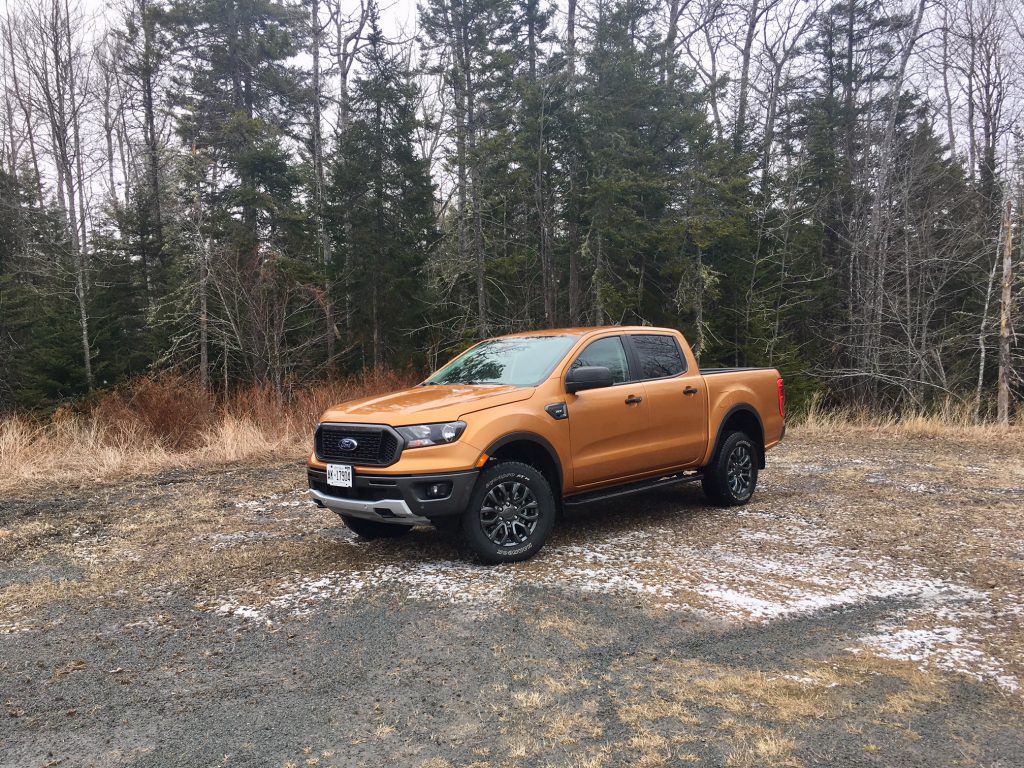 But this time it was a Ford Ranger.

I am of course referring to the amount of attention I sometimes get from the press vehicles I drive. I’m not entirely sure why Ford’s re-offering to the mid-size pick-up truck segment garnered so many looks, almost exclusively from fellow pick-up drivers. Sure the burnt orange (officially called Saber) paint is a unique colour in its own right. But as far as pick-up trucks go, the Ranger doesn’t break any new ceilings when it comes to style. Let’s be honest, that’s a tough task for a pick-up truck.

It has to be the Ranger’s history, then.

It was 2012 when Ford decided the Ranger was no longer
appealing enough to keep within the lineup. GM had given the ax to both of its
mid-size offerings as did Dodge. Everyone wanted half-tonnes and the reason why
– at least partially – was due to the huge incentives available. Why buy a
mid-size when you can get twice the truck for the same buck?

Enter 2019 where GM has been playing in the segment again for some time and the two Japanese offerings, despite being so long in the tooth, are still keeping strong sales. Ford had to act.

So, the new Ranger is here. And it isn’t particularly North Americanized. Sure, there are some styling elements changed and a few underpinnings adjusted, but the Ranger you see in the pictures is the global Ranger sold in markets such as South America. Ford couldn’t afford to wait until 2021 to give us a version solely catered to us North Americans.

Style-wise, the Ranger should offend absolutely no one. It isn’t particularly notable and that’s probably a good thing. My tester came with the FX4 off-road package which raises the suspension, nets it beefier tires and dark alloys. Premium lighting is available in the top trim, but halogens are the name of the game otherwise. I am pleased to say that the rear lights are LED, including the turn signals which are the proper amber colour. The tailgate is tall and the word Ranger is stamped into it. There’s no mistaking this for an F-150 or anything else. It has its own unique style.

The interior is familiarly Ford and it is fairly simple in design. That’s okay with me, pick-up trucks shouldn’t be as flashy as they’ve recently become. My tester came equipped with Ford’s Sync3, which is quick in operation and easy to use. It also houses the audio controls, navigation and climate controls. Thankfully, the latter can be controlled by using the hard buttons underneath. There’s nothing more irritating than a manufacturer who makes you dive into the screen and subsequent sub-menus to turn on the heated seats.

The seats themselves are decently comfortable with good support but the interior is certainly on the smaller side – and that’s even with the crew-cab. A North Americanized version will likely address that, but other markets aren’t as obsessed with interior room as we apparently are. That isn’t to say the Ranger is a tight squeeze in the rear, but the offerings from GM and even Toyota offer more space. The rear seat cushion lifts up to reveal some additional storage and more room to haul your stuff or perhaps your dog. But the cushion is one piece, meaning either it’s up and no one can be seated back there, or its down and people can be seated but you can’t access the additional storage. A split bottom cushion would have made much more sense.

There are two box lengths available. If you get the super crew cab you’ll get a five foot bed and if you opt for the super cab you get the six foot box, but you lose a fair amount of rear seat room. One glaring omission in the Ranger is the lack of a damped tailgate so be mindful when opening it.

Perhaps the best part about the Ranger is the engine and transmission combo. There’s only one combo to choose from but they work together better than cheddar cheese and apple slices (seriously, try it if you haven’t – delicious!). It’s a 2.3 litre ecoboost (which means turbocharged in Ford speak) 4-cylinder which churns out 270 horsepower and 310 pound foot torque. The 10-speed automatic likes to stay out of the way, all while keeping the Ranger in the appropriate gear for the situation. Peak torque comes in around 3,000 RPM which is pretty much the sweet spot.

Power delivery is great, this is one quick truck. It sounds pretty growly for a 4-cylinder too, especially during a cold start, so if you’re the type that feels a pick-up needs at V6 at the very least, the Ranger will quickly make you re-evaluate that opinion. Towing capacity comes in at around 7,500 pounds – pretty standard for the class – and payload comes in at around 1,500 pounds for the five foot box.

With all that being said, I have a real problem with Ford creating the term ‘Ecoboost’. I’m not entirely sure what is wrong with the term ‘turbocharged’ but putting ‘eco’ in a word you made up would seem to suggest some sort of efficiency. Officially, the Ranger is rated at 11.8 L/100 kms city and 9.8 highway with a 10.9 combined rating. After a weeks’ worth of mixed city and highway driving, my fuel consumption came in at a rather disappointing 12.4. Aside from testing the engine’s performance abilities all of one time, I largely drove the Ranger as normally and as efficiently as I could. Admittedly, when I first was handed the keys, I made several short trips which does negatively impact fuel consumption, but I still would have expected much better from something with the term eco in the name.

Driving the Ranger around town is a breeze thanks large in part to its size. It is almost the perfect size for city driving, though I question why anyone in the city would need a pick-up truck in the first place. But I digress. Parking and maneuvering parking lots is easy thanks to a good turning radius as well.

If you’re looking for a Lincoln-like ride in the Ranger, look elsewhere. Not that pick-ups should necessarily feel like luxury barges, but the Ranger tends to lean more towards a bouncy ride. That’s certainly not out of place in a pick-up but newer pick-ups have a bit more refinement dialed in. It’s not a deal breaker.

Likewise, the handling could be described as a bit cumbersome, but it’s still well within acceptable range for a pick-up. It was immediately noticeable when I first drove it, but by the end of the week it seemed barely noticeable so it’s something you get used to quite quickly.

And North Americans should get used to seeing the new Ranger on the road quickly as well. But there elephant in the room is of course big brother which is consistently a top seller in Canada and indeed the world. And if you go to Ford Canada’s website, there’s something glaring. The Ranger starts at $30,569 while the F-150 starts at $28,299. Granted that’s for a bare bones regular cab F-150, but still it’s a noticeable difference, not to mention dealers likely have more room to move on the F-150 than they do the Ranger.

Still, when compared to its direct competition, the new Ranger can certainly hold its own in many ways. When the new North Americanized version comes in 2021, buyers will almost certainly give it more consideration. But truthfully they should do so as well with this global version.