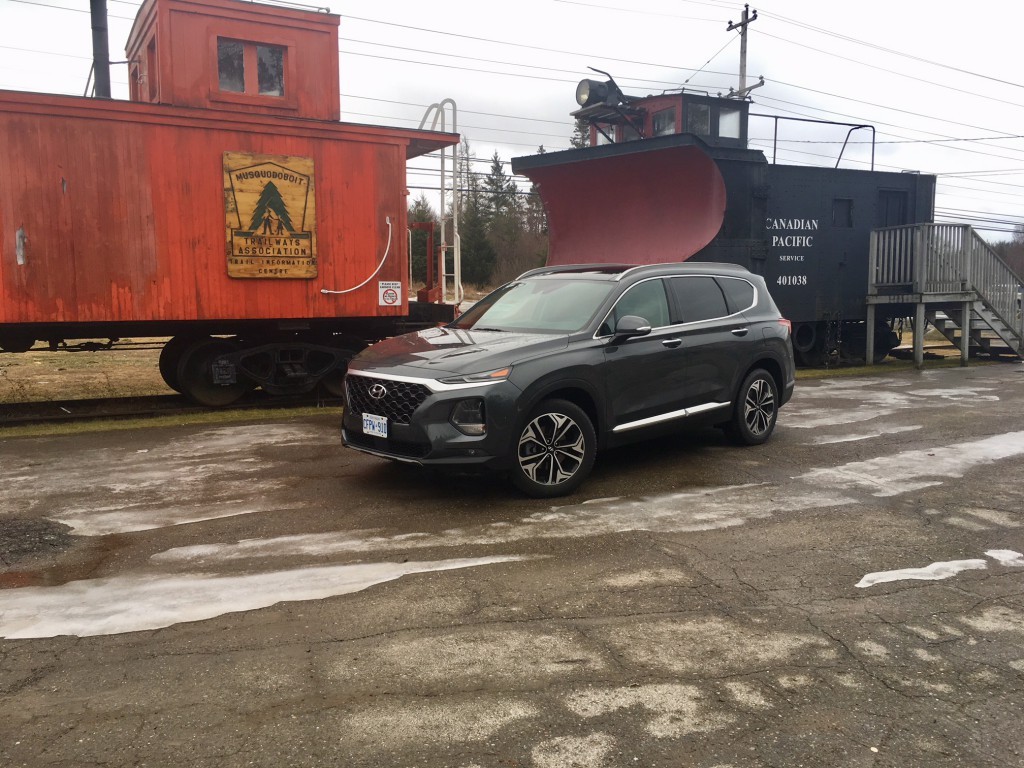 I bumped into an old work acquaintance, named Jamie, a few weeks ago while out sampling some particularly delicious ramen. After we both agreed the ramen was fantastic, we naturally moved the conversation along to cars.

I asked him what he was driving these days. The last I knew, he was the owner of a current generation Hyundai Sonata (pre facelift). When he bought the car, he was excited not only about the deal he got (which was something like seven grand off the sticker price), but also the extra goodies Hyundai typically includes in their cars for the same price as the competition. Read: value.

He told me he had been consuming the SUV/CUV kool-aid (my words, not his) so he traded in his Sonata for an SUV, like all the cool kids. I asked what it was that ultimately made him decide to switch vehicle segments. He said he liked the higher seating position, all-wheel drive, and more room for his golf clubs. For the record, the Sonata’s trunk should be able to swallow a standard set of golf clubs, but I digress.

It turned out, Jamie was now the owner of a new Chevy Equinox, with the 2.0 turbocharged engine, for the past year or so. I asked him how he liked it which induced two thumbs up from him. I also asked if he missed Hyundai as a brand and if he considered the Santa Fe before signing on the dotted line for the Equinox. He said yes to both questions and added that the generation of Santa Fe available at the time was tired looking and old-feeling inside. The previous generation Santa Fe was the only offering available at the time and that was the only reason he looked to other brands. 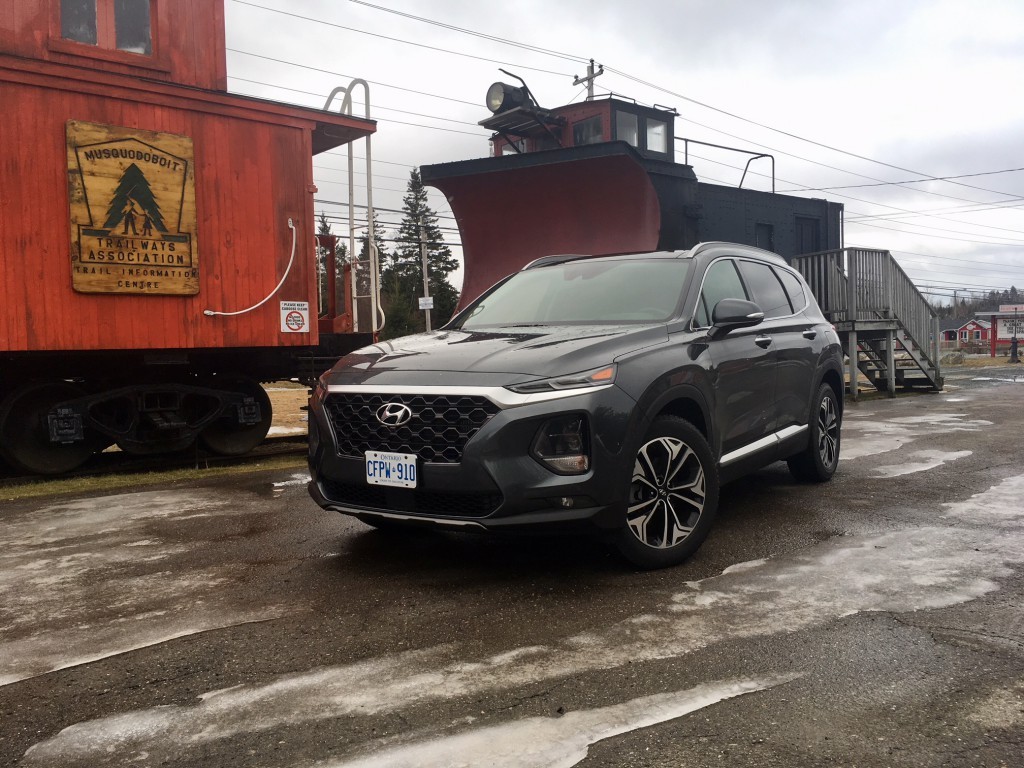 I then took the key fob from the brand new 2019 Santa Fe I was testing that week out of my pocket and dangled it in front of him. He hadn’t realized the new and completely re-worked Santa Fe was already out and hadn’t even seen any pictures online. Naturally, I took him around the corner where it was parked so he could check it out, without the pressure of a sales person. 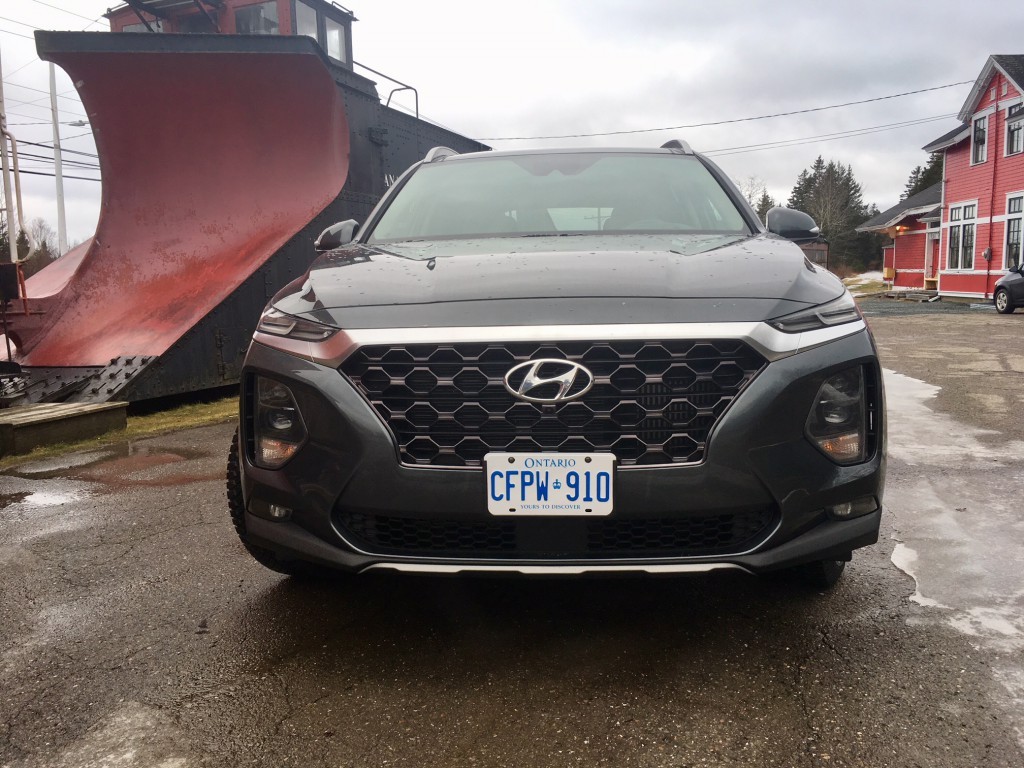 He sized it up and down from all angles. After a long pause, he said “…I think I like it”.  He pointed out that the front end seemed reminiscent of the much smaller Hyundai Kona (which I drove late last year. You can find my review here). Indeed, it is, and to this writer’s mind, the front styling is even better executed on the larger Santa Fe. I know some people don’t like the new “put the headlights where the fog lights would ordinarily be” craze, but I tend to like it. While my taste in car styling is more conservative leaning in nature, I appreciate different design cues which challenge our perception of what “normal” should be when it comes to cars. I’ll admit, the sheer amount of lighting up-front is a bit much, but my old work buddy Jamie agreed the styling certainly made it stand out more than the outgoing model. He also loved the design of the wheels and thought the tail lights, while lit up, where striking. I agree. There’s lots of intricate detail in them. But despite the polarizing styling cues, the Santa Fe still retains the traditional three-box shape that seems to draw people from their sedans in the first place. 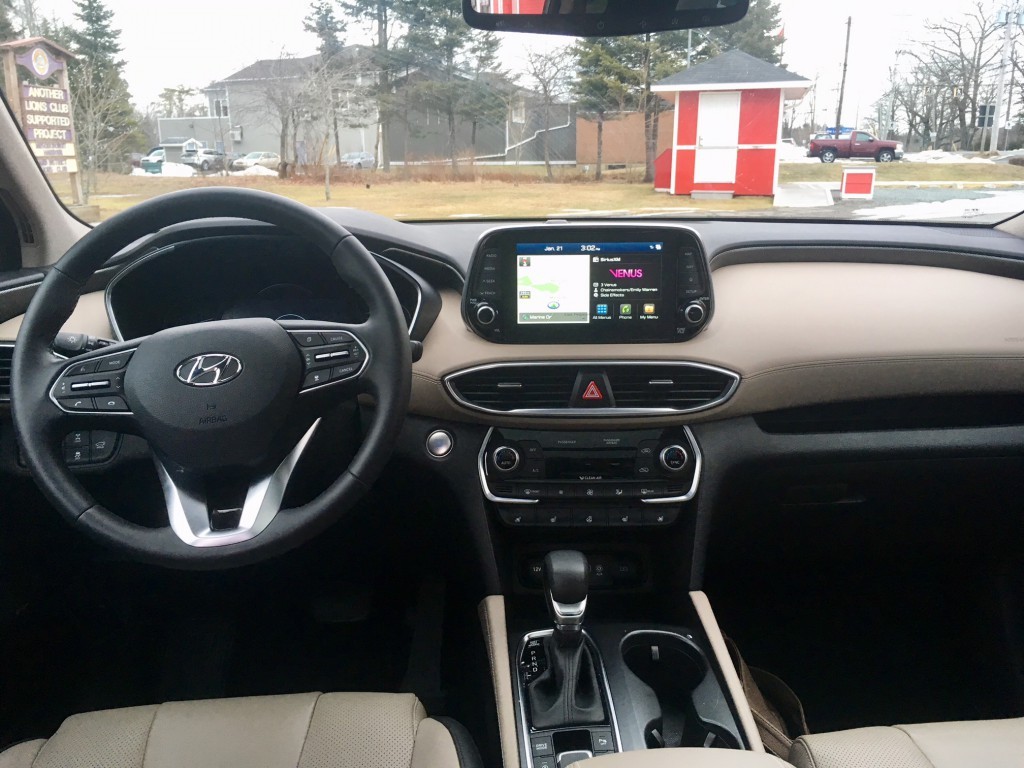 Then I opened the door and told him to hop in. That’s when his interest really started to peak. The first thing he did was look up. While the panoramic glass roof is certainly eye-catching, it wasn’t what he was looking at. It was the headliner. I have to admit, I did the exact same thing when I first stepped into the new Santa Fe too. I’m not quite sure what material it is made from, but it is quite premium looking and feeling. I don’t think I’ve ever seen or noticed such nice headliner on a vehicle before. I told him if he liked the look of the headliner, he should take a look at the speakers in the door. 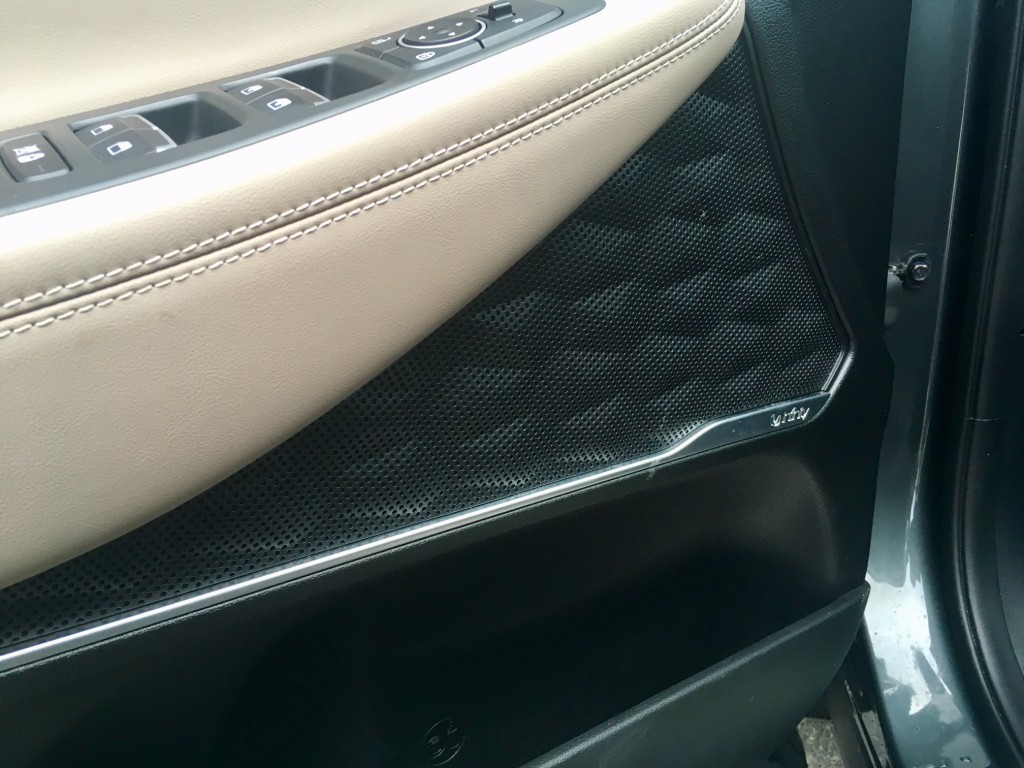 “WHOA! That’s so cool!” he said after realizing the speakers have almost a 3D diamond-like pattern to them. He said at first, he thought it was just fancy material along the door panel and didn’t realize it was actually the speakers.

After touching such things as the steering wheel, the gear shifter, rummaging through the centre bin and molesting the headliner once more, he concluded that Hyundai had surpassed his expectations. 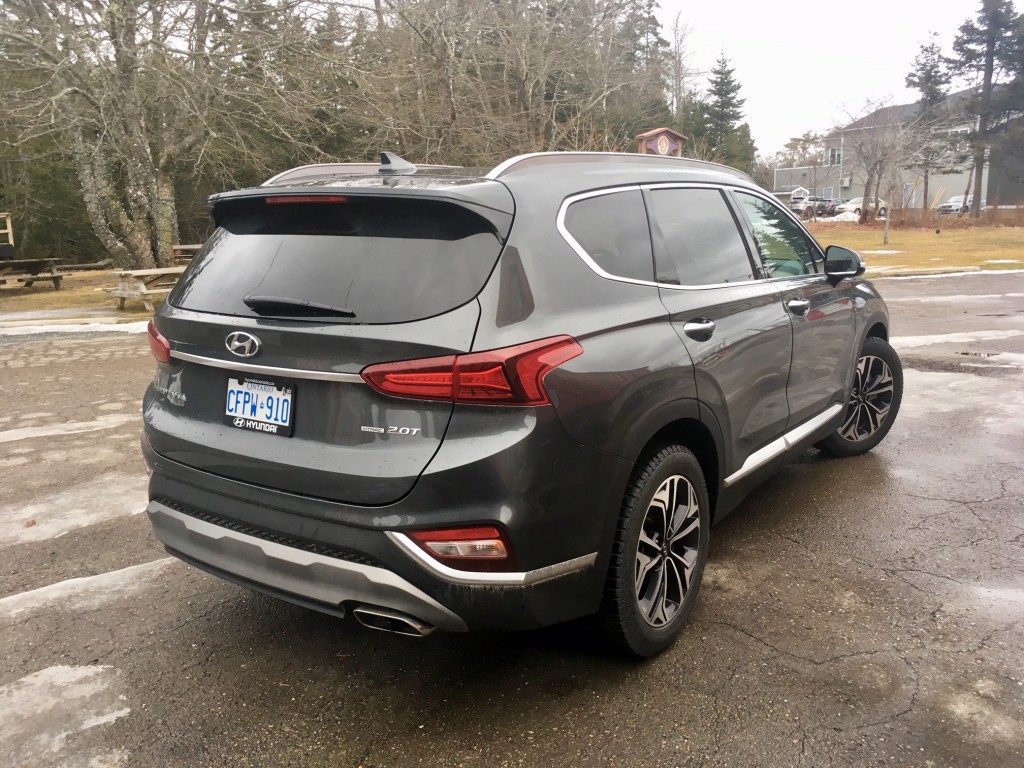 Indeed, the new Santa Fe, from an exterior and interior styling standpoint, deserves high praise. It’s unique and premium feeling and returns the old feeling of “value” that most Hyundai vehicles tend to represent.

The eight-inch screen, while placed a bit too high for my liking with some buttons and knobs placed way out of reach of the driver, continues to be intuitive and easy to use. It also is Apple CarPlay and Android Apple compatible. 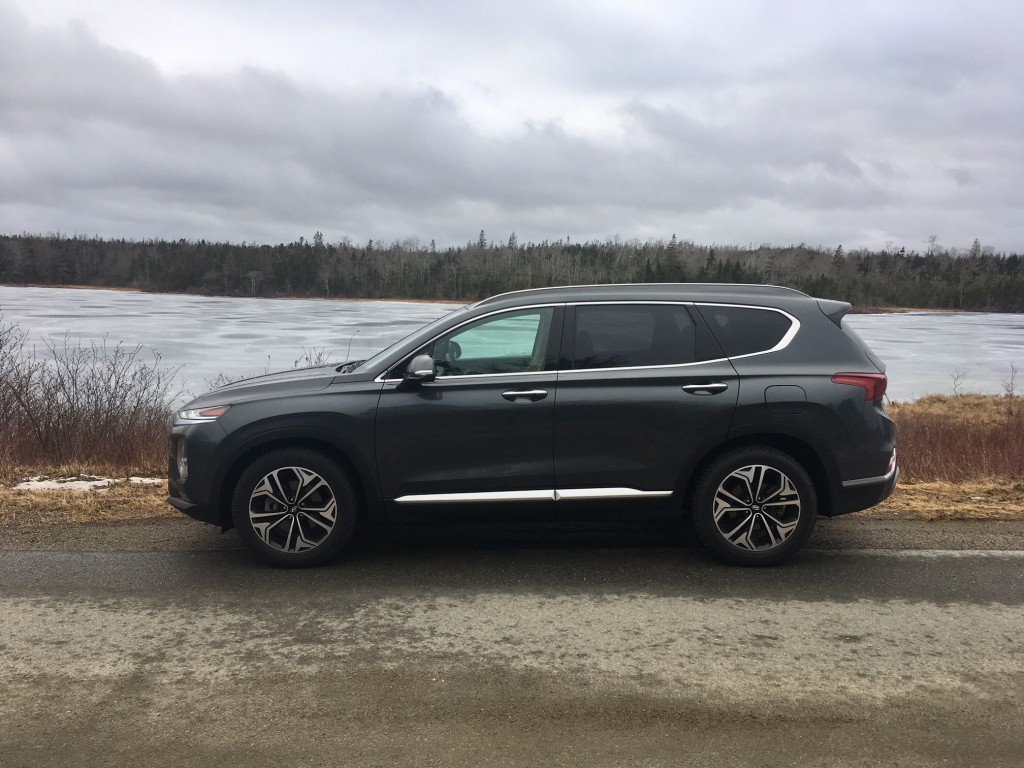 It feels airy inside thanks to that panoramic roof. Head, leg and knee room is plentiful no matter which seat you are relegated to and the reclining rear seats, which are also heated, helps to pamper rear seat passengers. Of course, those seats fold to expand the cargo area from just under 36 cubic feet to 71 cubic feet, making for a truly cavernous area. 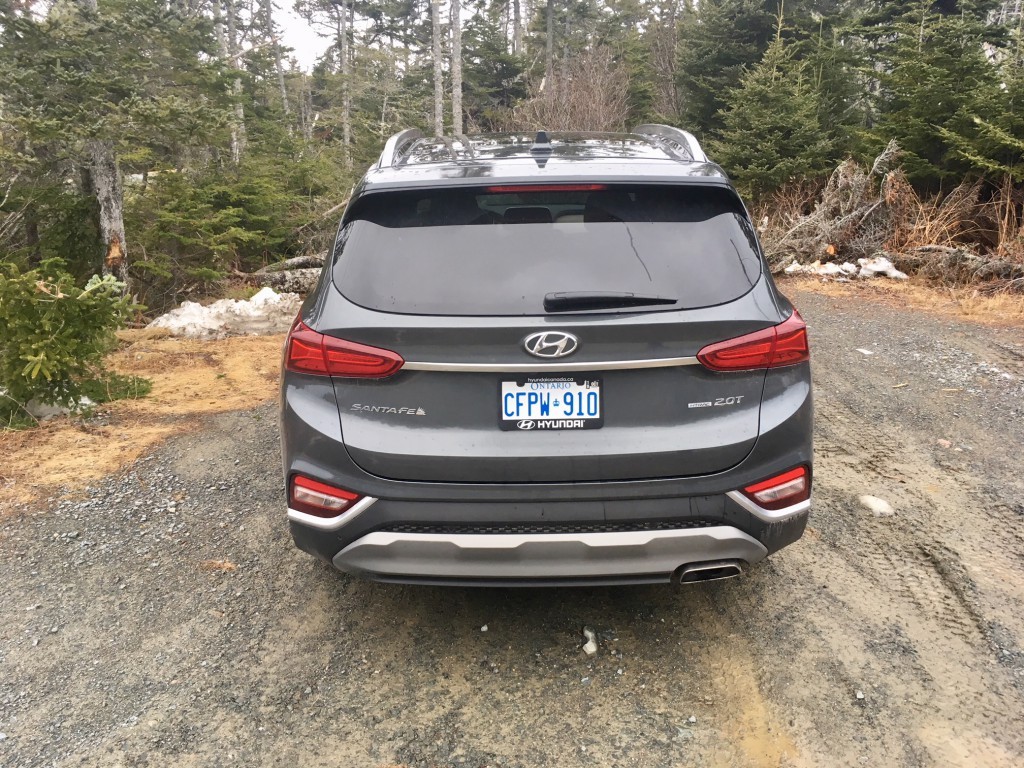 The new Santa Fe can be had with two engines: a normally aspirated 2.5 four cylinder which puts out 185 horsepower and 178 pound foot torque or there’s a turbocharge four making 235 horses and 260 pound foot torque. The latter is only available in the upper trim levels and thus, is what was sitting the in the engine bay of my tester. Both engines are mated to an eight-speed automatic. 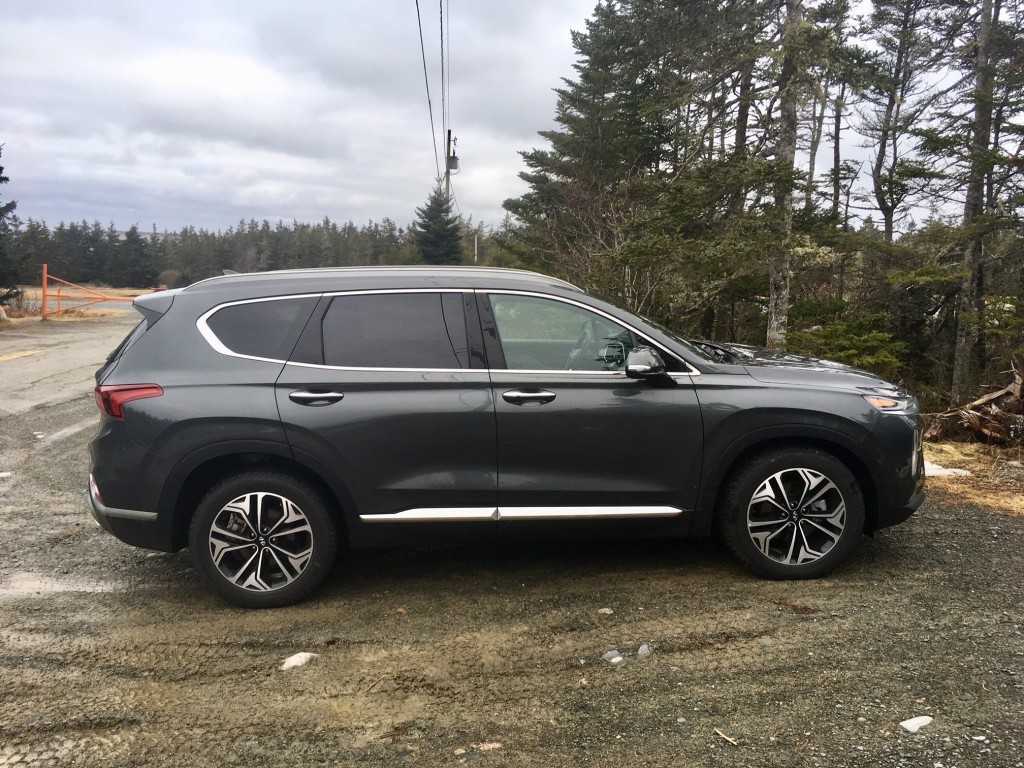 Without having tried the 2.5, I can still say with a fair measure of confidence that the 2.0T is the engine you’ll want. While it is certainly a capable engine for most driving situations, I found that it doesn’t translate into quick, off-the-line starts. As a result, the Santa Fe prefers you to take it easy most of the time, but is willing to comply if it must. I also found the Santa Fe noticeably ran out of juice at the top end of the rev range. If this is the case for the most powerful engine available, then it’s logical to conclude the 2.5 would feel even less eager. 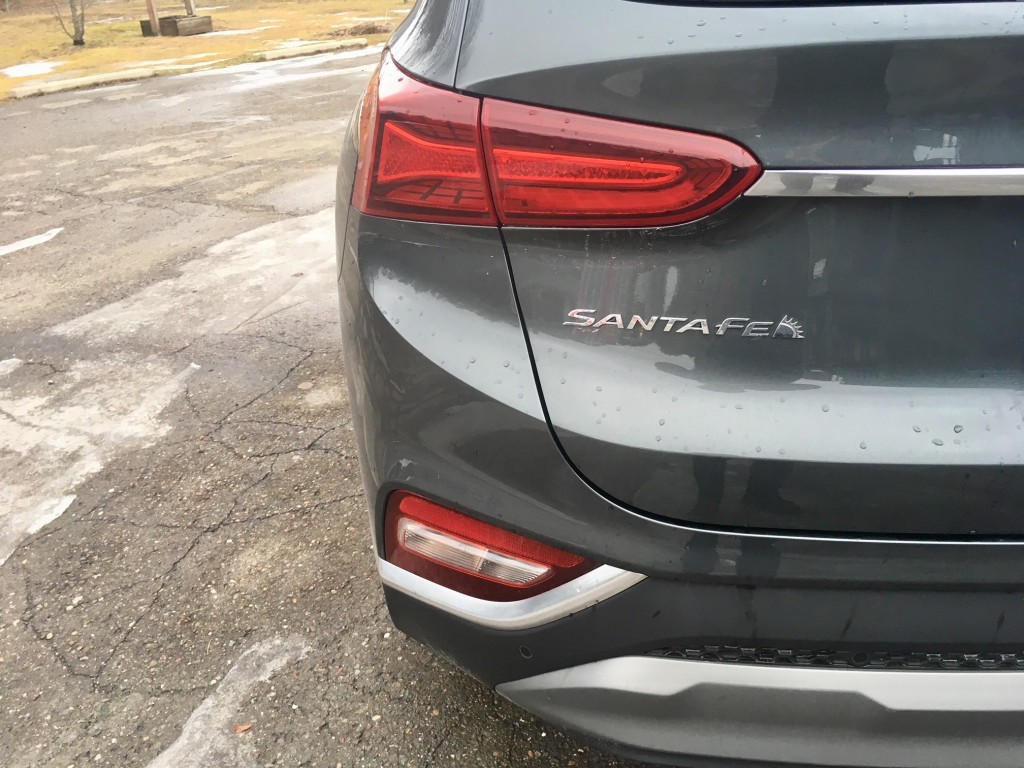 For comparison, Greg’s 2018 Chevy Equinox is also equipped with a 2.0T engine. Both engines have identical torque figures, but the Equinox has the advantage with 252 horses. I drove the 2018 Equinox 2.0T, and found it to be a more eager companion than Hyundai’s unit. Still, that doesn’t mean that the 2.0T from Hyundai is a slouch by any means. It just does not have the same gusto as the offering from Chevy. 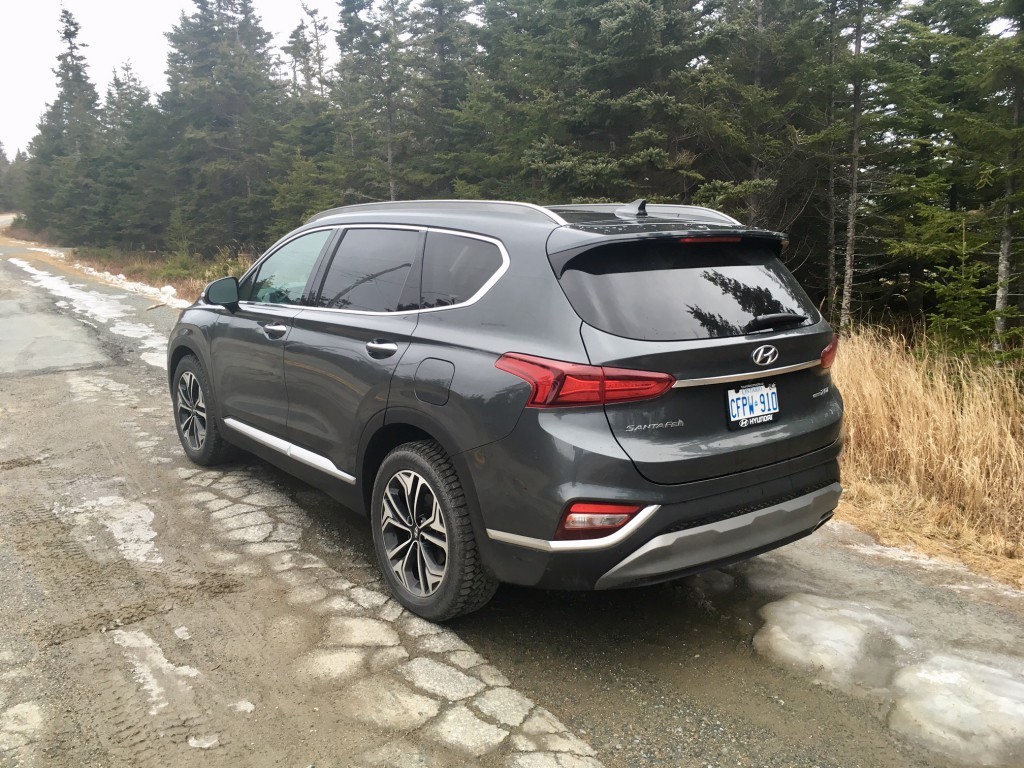 It should be noted that Hyundai does not list the Equinox as a main competitor of the Santa Fe. From bow-tie brand it lists the all-new Blazer as one of the Santa Fe’s main competition. It should also be noted that the new Blazer can be had with a V6 churning out  305 horses from its  top unit. I had to admit to Greg that I found the engine-transmission combo in his Equinox to be more compelling, but for most, this unit should to the trick. 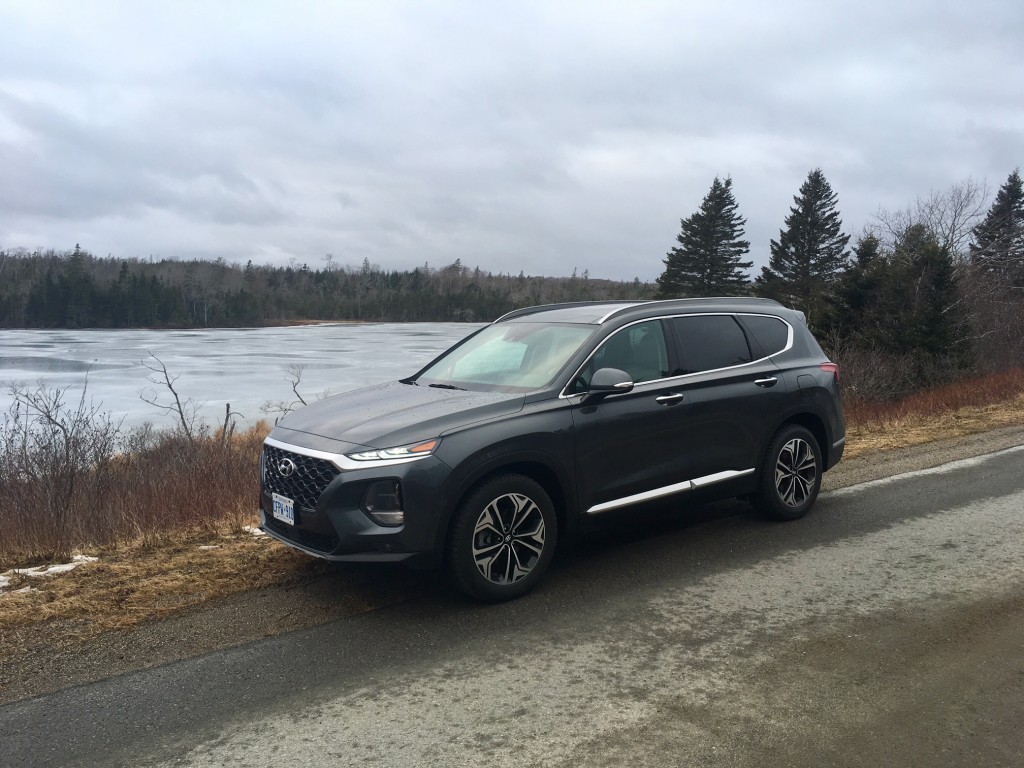 On the road, whether its in town or on the highway, the Santa Fe has good and predictable mannerisms. Pair that with excellent outward visibility and you’ve got yourself an SUV that is easy to live with day to day. There is little wind noise and with the engine happy to stay out of the way, the ride is also on the quieter side. The chassis appears to be more refined and the suspension is more compliant without the ‘hollow’ feel of Hyundais of the past.

There are different drive modes, but like most drive modes now a days, it’s probably best to just keep it in normal mode. Eco neuters the experience a bit too much and sport mode merely gives an impersonation of sporty-ness – not the real thing. Keep it in normal and you’ll be fine. 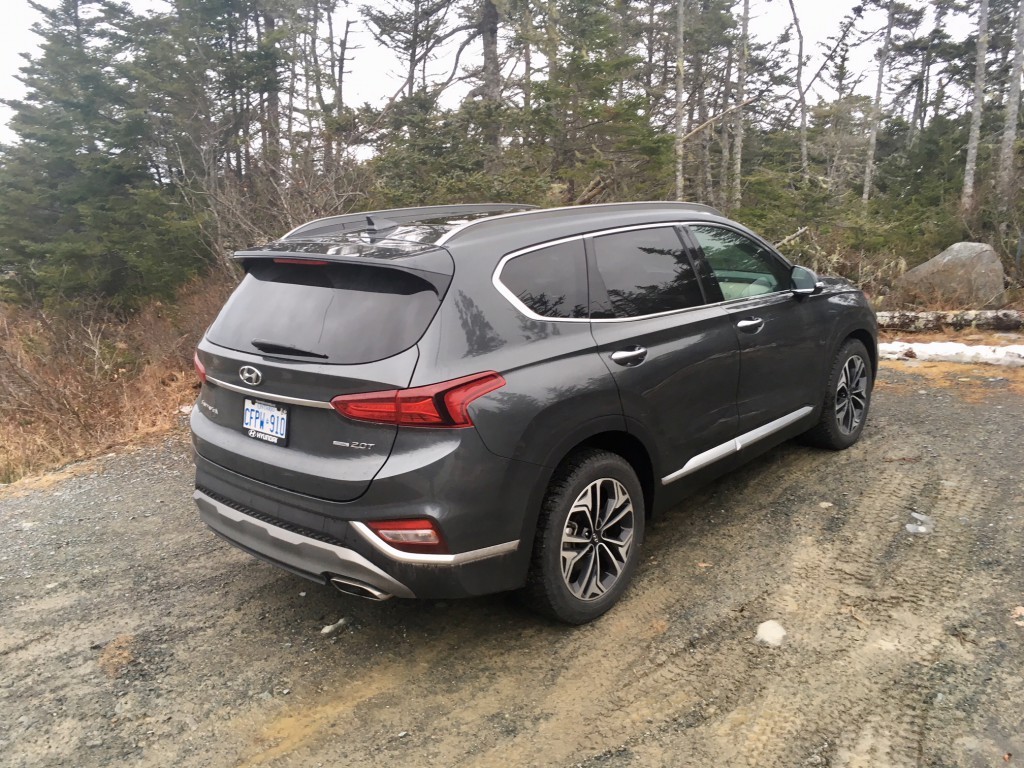 With the 2.0T engine, the Santa Fe is officially rated at 12.3 L/100 kms city and 9.3 highway. After a week of mixed driving, my real world fuel consumption came in at 10.8. That’s not terrible considering the Santa Fe’s new growth in size. 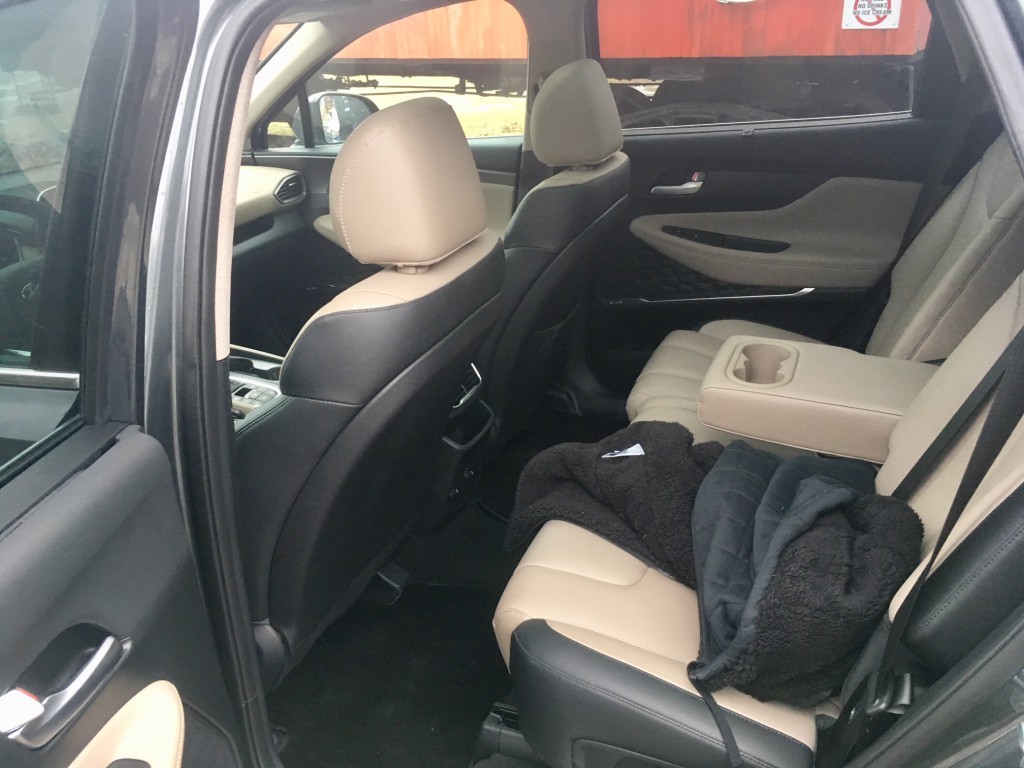 In the end, I asked Greg if he would have taken the new Santa Fe, had it been available at the time he was shopping over the Equinox. I admit, that was a bit of an unfair question since he hadn’t yet driven the new Santa Fe, but he admitted it would have peaked his interest a lot more. He likes his Equinox, but admitted the latest Santa Fe was quite appealing to him.

And no one can fault him for that because the new Santa Fe indeed is indeed quite appealing. In true Hyundai fashion it offers good value, now with a more compliant ride and added premium feel. 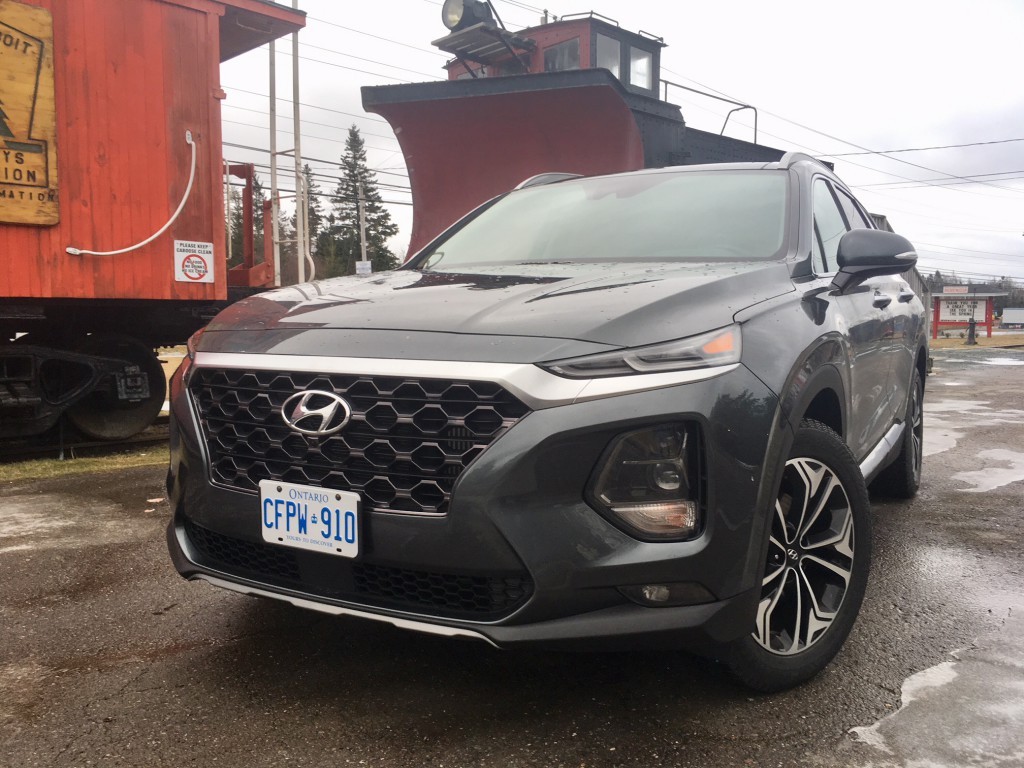 In other words, Greg can be forgiven for not giving the new Santa Fe a shot while he was buying since it wasn’t out yet. You can’t. If you’re in the market, make sure the new Santa Fe is on your shopping list.