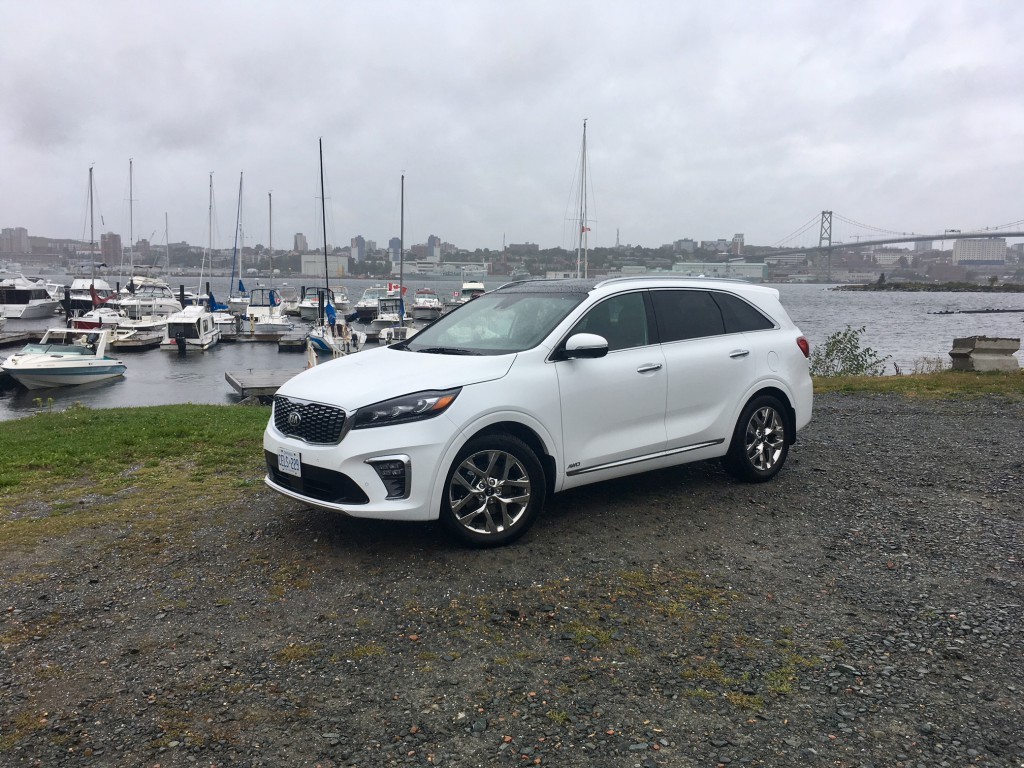 Much to the chagrin of automotive journalists, Kia must get a bit of a kick when discussing the Sorento’s place in the automotive landscape.

For a while now the Korean automaker has kept the size of the Sorento in the land of ambiguity when it comes to its class. That makes it tougher for us who review cars to pinpoint its exact competition. The Sorento is bigger than a Honda CR-V or Toyota RAV4, yet it’s smaller than a Ford Explorer or a Nissan Pathfinder.

To make it even more confusing, the Sorento can be had as a two row or a three row vehicle.

With all that said, I do believe I have thought of a couple direct competitor of sorts, which you’ll see at the end of the review in the ‘immediate competition’ section.

For now, let’s explore the changes for the 2019 model year. 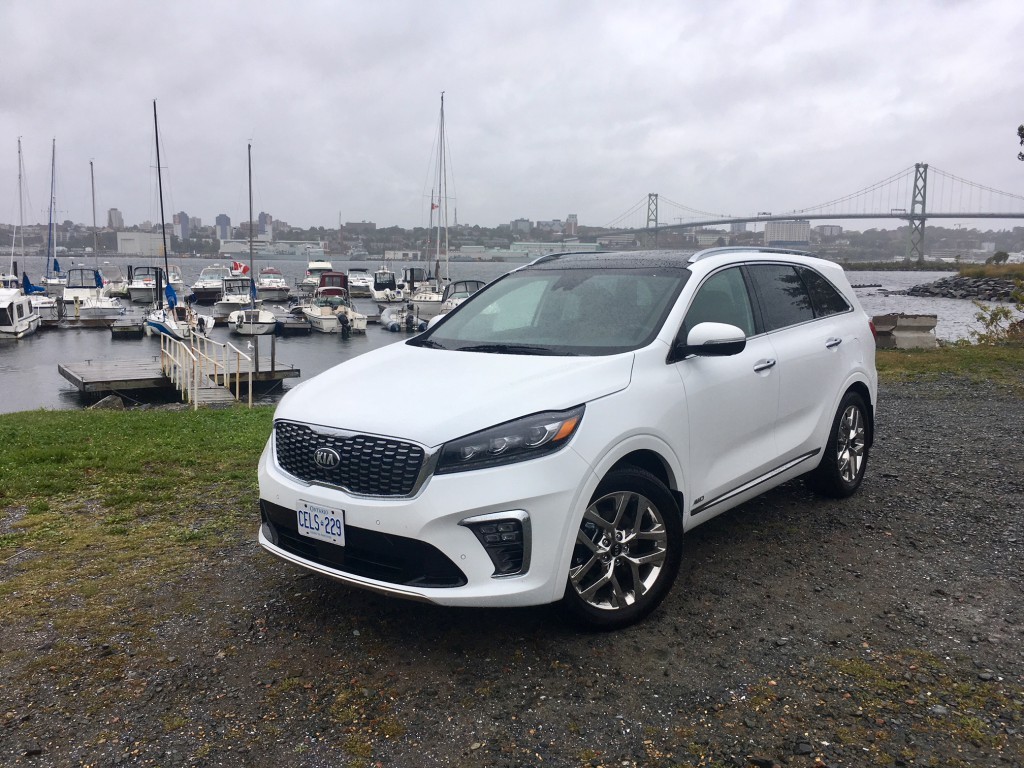 For starters, the exterior has been refreshed and augmented to look more premium. Perhaps the biggest give-away that you’re driving the 2019 model year are the new LED daytime running lights in the upper trim levels which illuminate the turn indicators giving a bright amber colour. This is eye-catching from far away and certainly gives it some road presence. Other changes include revised tail lights, new wheel options, chrome exhaust tips and a more prominent re-worked grille. The overall look comes off as being handsome and sophisticated. Well done here, Kia. 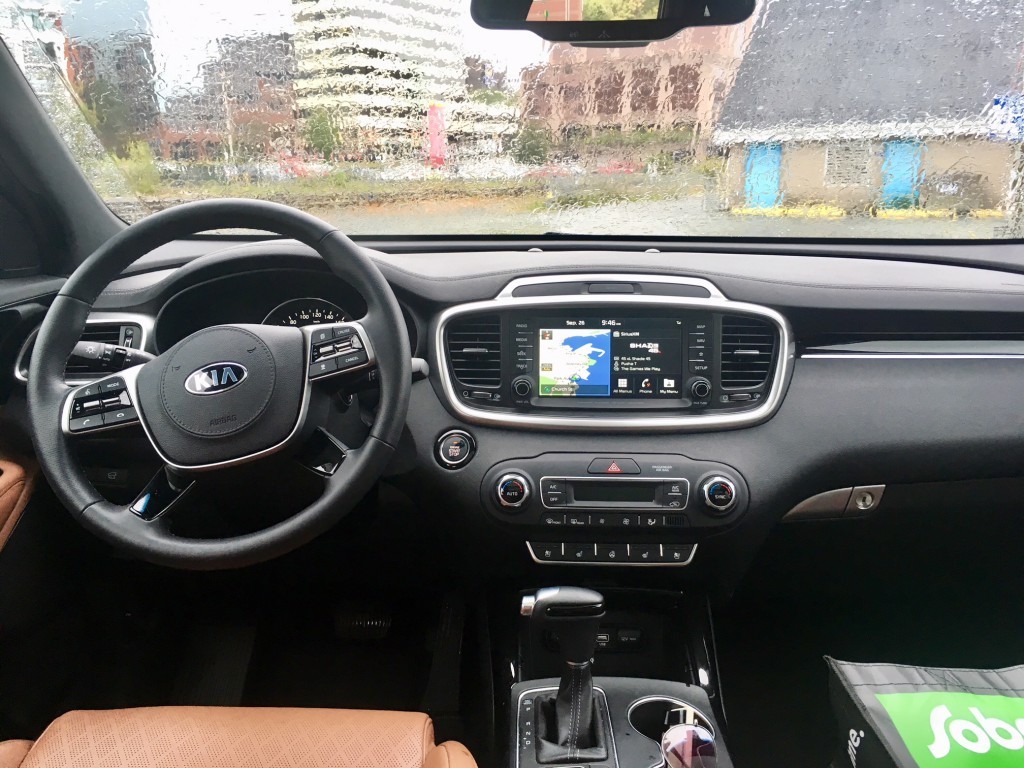 Inside you’ll think you’ve entered the cockpit of a high end Japanese vehicle. It certainly impresses with its caramel coloured premium leather seats, panoramic roof and large infotainment screen. The redesigned steering wheel is the only visual clue that you’re driving the updated 2019 model, everything is largely kept the way in was in the 2018 model year, which isn’t a bad thing. The centre stack is still straightforward and easy to use. 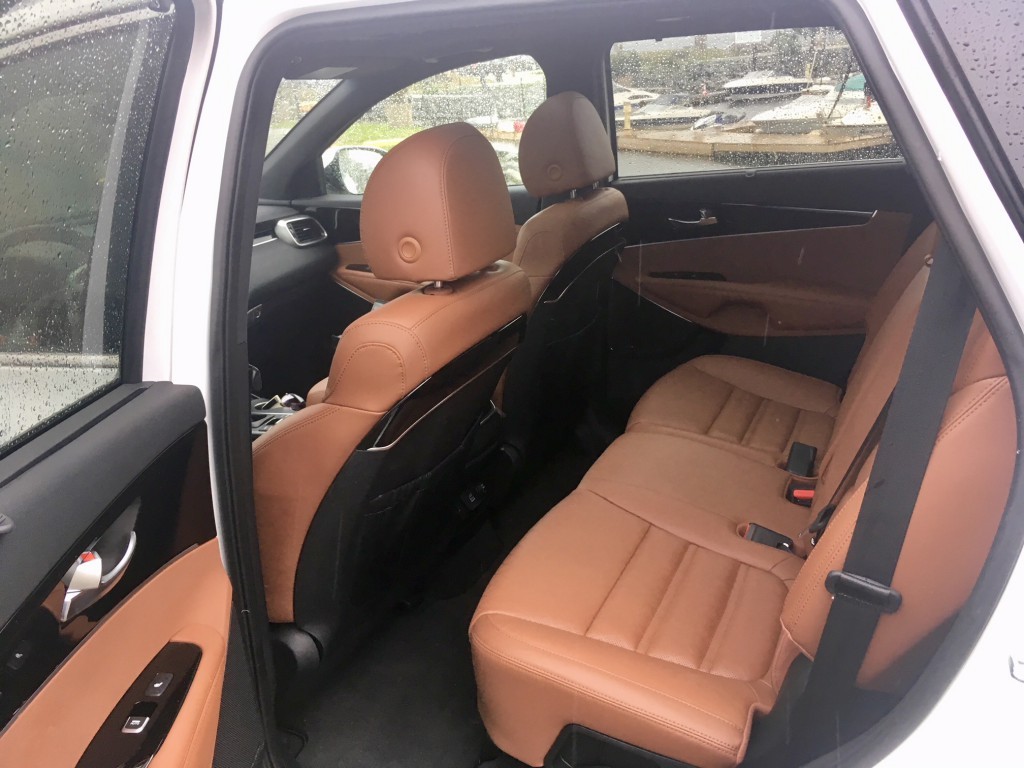 It should be noted that Sorentos equipped with the V6 engine get a new UVO Intelligence App, which allows you to remotely start the vehicle from anywhere, it can lock or unlock the doors and can allow you to flash the lights and sound the horn. It will also notify emergency services should it detect that the airbags have gone off. This is a service first introduced on the Rio and it is available to use for free for the first five years. With most leases concluding after four or five year periods, this essentially means you can drive with close to complete peace of mind – for free – until it’s time to upgrade to a new Sorento. There is a reason why the Korean brands are synonymous with value and this is certainly exhibit A. 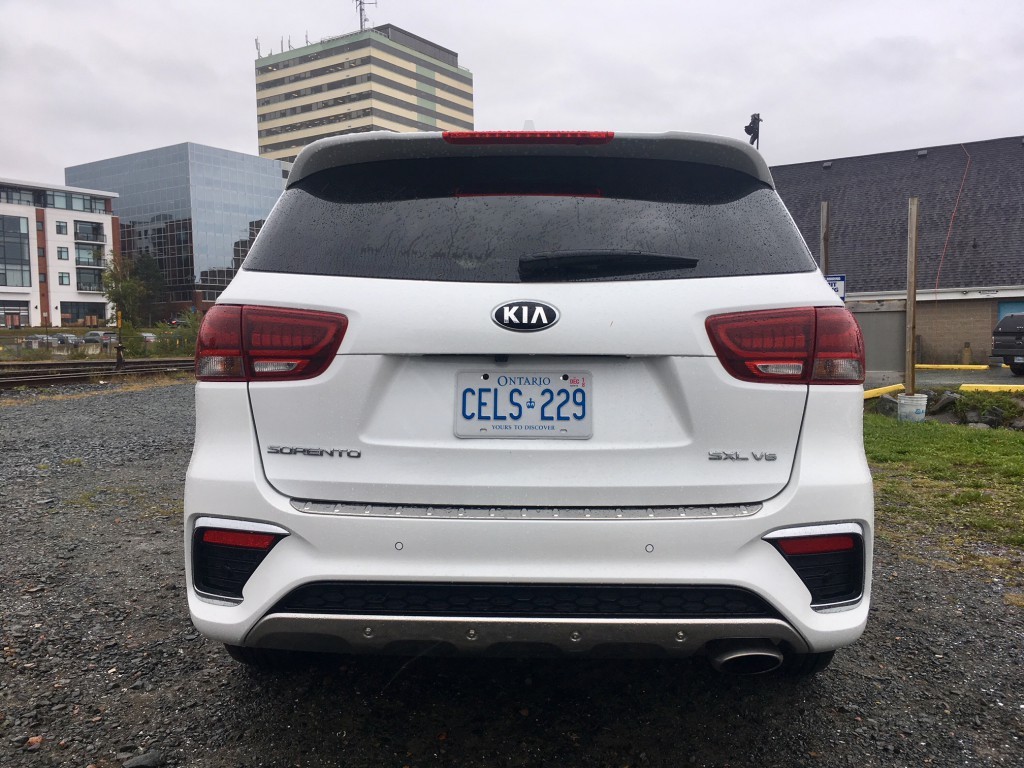 With that said, Exhibit A of why the Sorento does not offer exceptional value could be all the active safety features that are only available in the very top trim. Sorry Kia, but safety tech should be standard across the board, or at the very least, optional in lower trims. 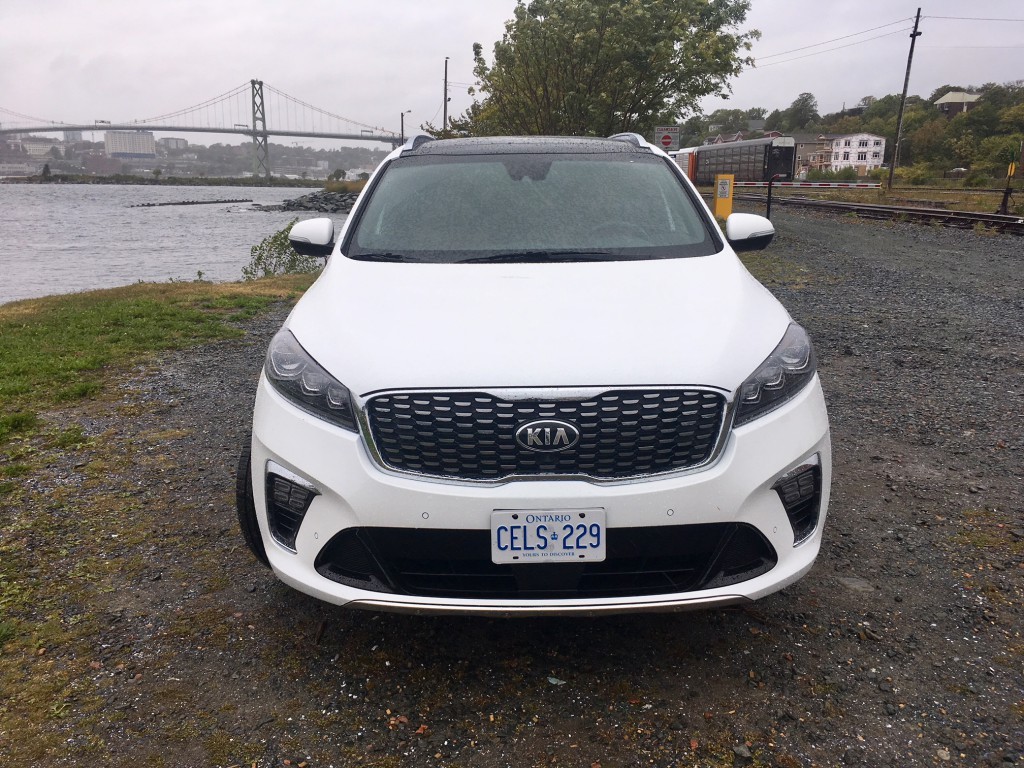 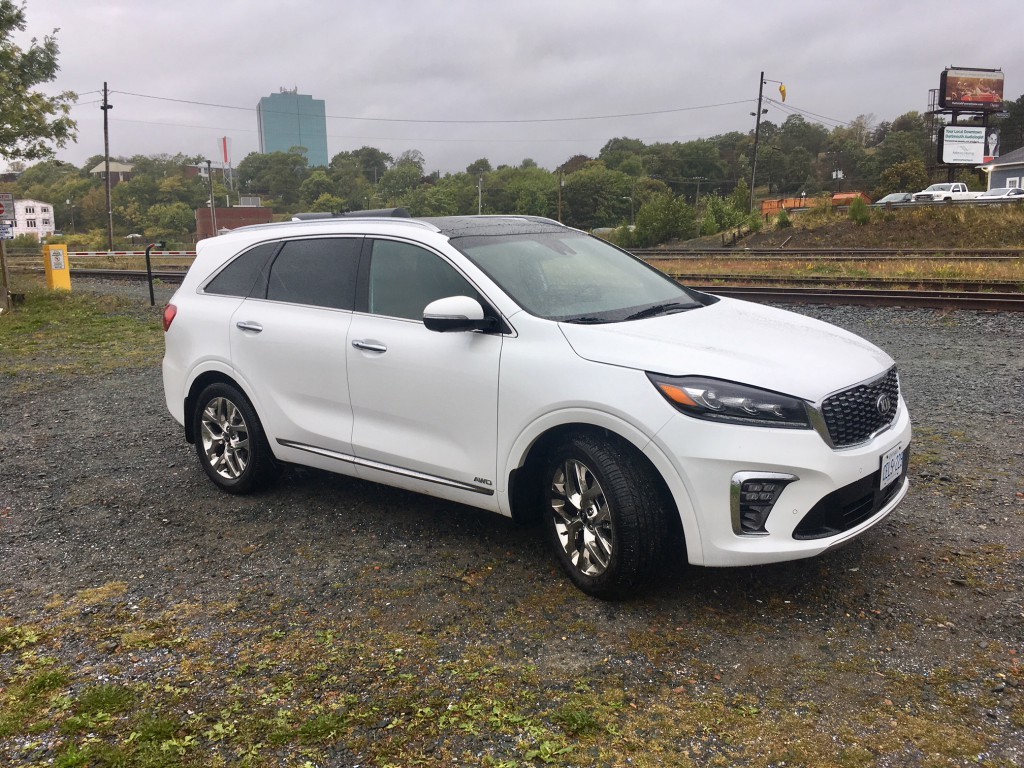 If you’re an avid Kia Sorento aficionado (I’m sure they exist), you may have picked up on something I said earlier in the review and that is the fact that the Sorento now has a V6 option. It replaces the old 2.0 litre turbocharged unit. The 3.3 litre makes 290 horsepower and 252 pound feet of torque mated to a new eight-speed automatic. There’s also a naturally aspirated four available, and the 2.4 litre unit makes 185 horses and 178 pound feet of torque. It should be noted that you can only get three row models with the V6, there are no five passenger V6 models. If you don’t want the third row, you’ll have to get the smaller engine. If towing is something you sometimes do, the Sorento with the V6 can tow up to 5,000 pounds. 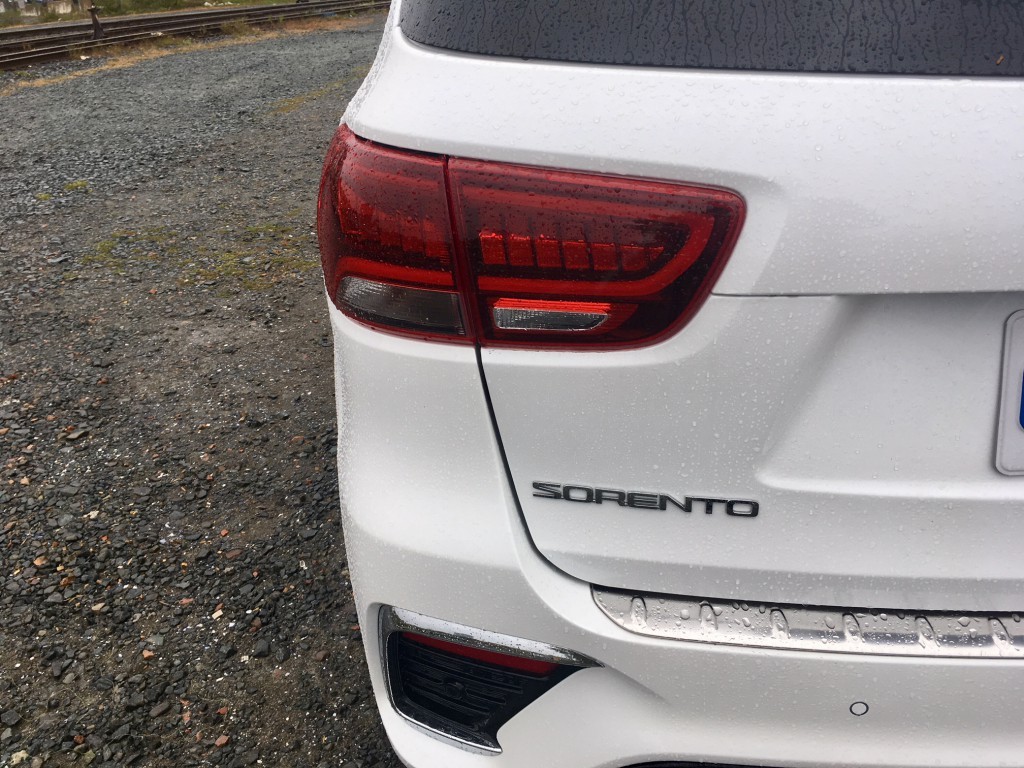 The V6 itself is smooth and refined. If you’re looking for a nice throaty growl you won’t find it here. This engine prefers to stay out of the way until you indicate you need more grunt. It may take a second but if you put your right foot to the floor, the Sorento is happy to oblige with good linear power. The transmission shifts nicely and seamlessly but the overall feel is less about brute performance and more about refinement. As such, the Sorento doesn’t feel particularly quick off the line. In fact, in the old 2.0 litre turbo that I tried three years ago, I said “a capable engine that can hustle the Sorento out of its own way in a hurry, however that power is not linear. Low end power is almost non-existent, it isn’t until the turbo checks in at mid-range where you feel any sort of oomph”. It seems Kia has addressed the lack of low-end power with the V6, though it doesn’t move with the same urgency as the turbo. 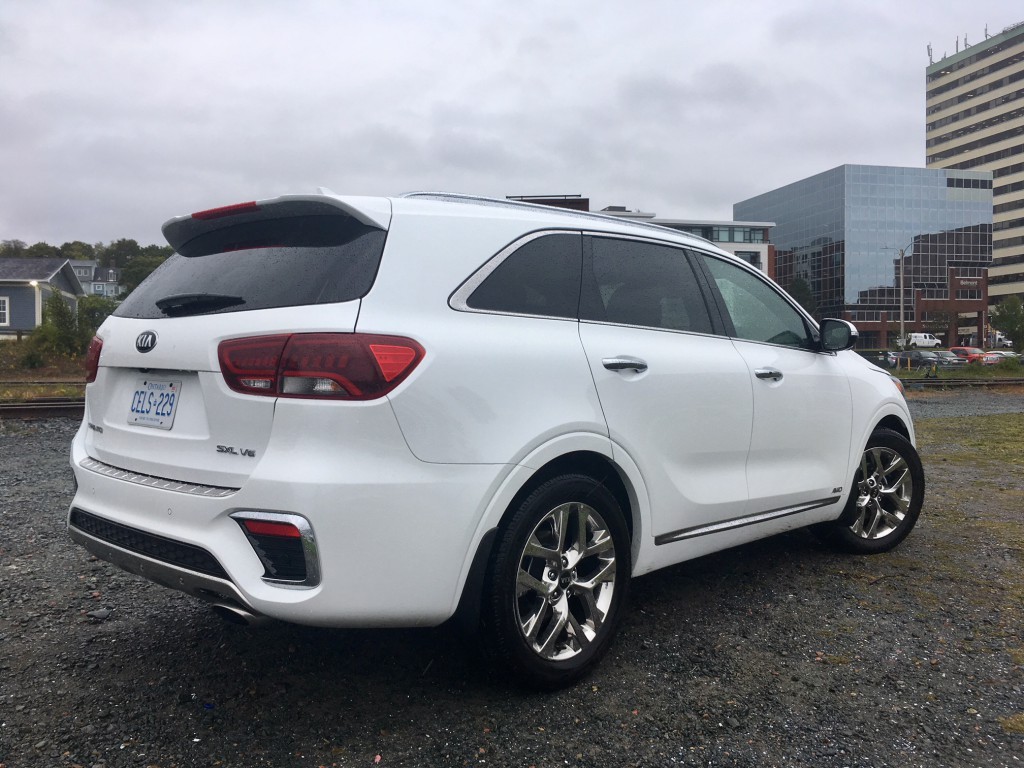 On the road the Sorento feels tame and quiet. The suspension allows it to sail over bumps and potholes with relative comfort and ease. The added power helps with passing on the highway and although the steering is fairly light and numb, the driver still feels a good measure of control. 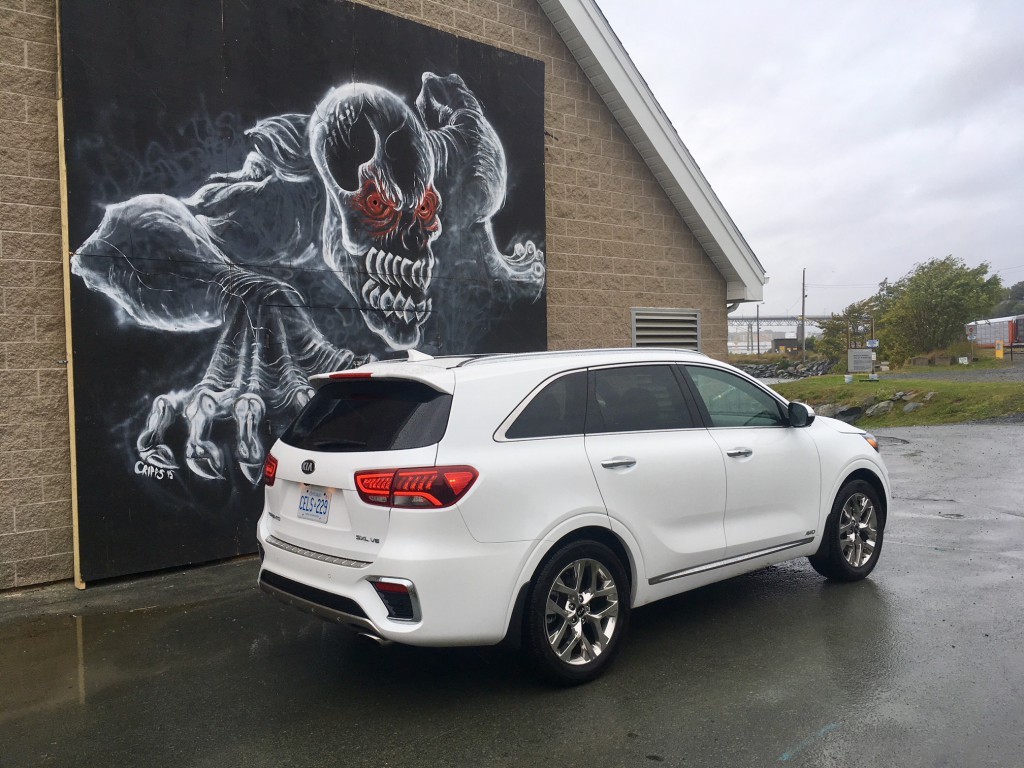 Where the Sorento falls short is when the road starts to get twisty. The suspension has not been upgraded for 2019 which means there is still a fair amount of float to it and taking a corner often feels like you’re taking a corner in a half-tonne or a minivan. It certainly has similar characteristics to those kinds of vehicles which means spirited driving should be limited to straight line performance. Otherwise you’ll experience a fair amount of understeer, body roll and lack of overall composure. This isn’t the worst thing about the Sorento – it isn’t meant to be a performance vehicle after all – but there are certainly options out there that handle the bends a little more confidently. 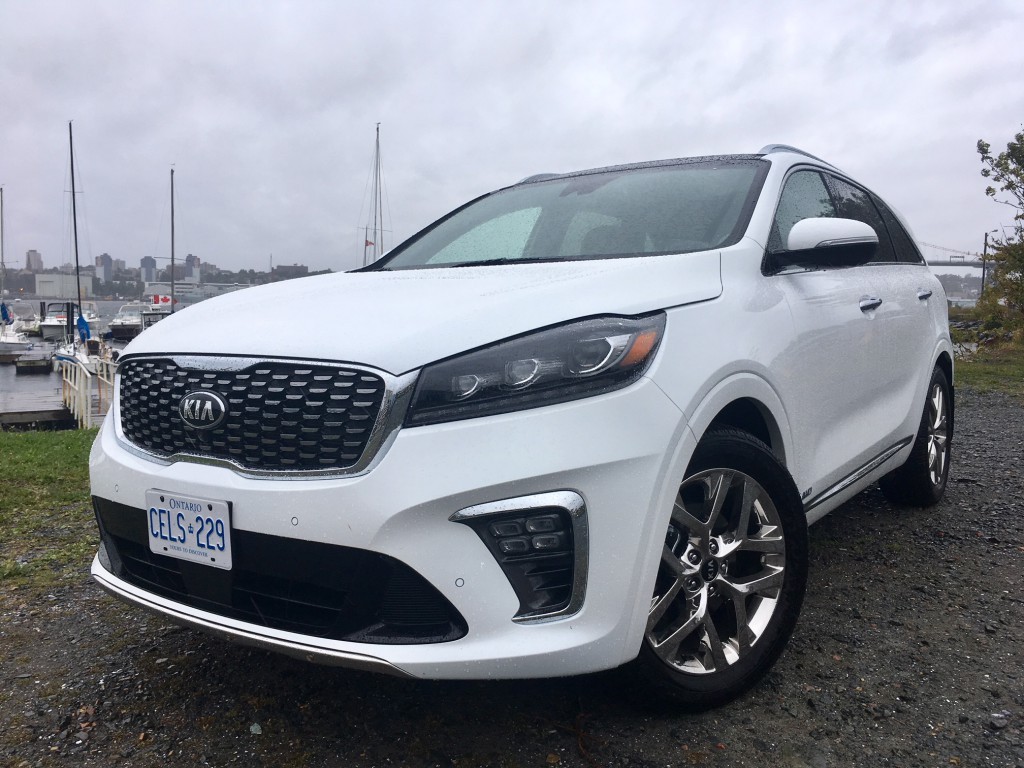 As you’d expect, upgrading from the a turbo to a V6 will mean increased fuel consumption. Officially, the V6 is rated at 12.5 L/100 kms in the city and 9.7 on the highway. During a week of mixed driving I was able to return 12.5 L/ 100 kms. That would be fine if I was limited to just city driving, but I did a fair amount of highway driving in my tester so I would have expected better average numbers here.

But overall the Sorento remains a good vehicle. It is certainly amongst the more refined and premium options available and has good versatility thanks to ample space and third row seating. Available V6 power is good for towing and overall thrust, and it is a handsome vehicle to boot. Overall, a nice tidy package. There’s room for improvement, but the Sorento is a fine option for those looking for an SUV that sprinkles in value and luxury.