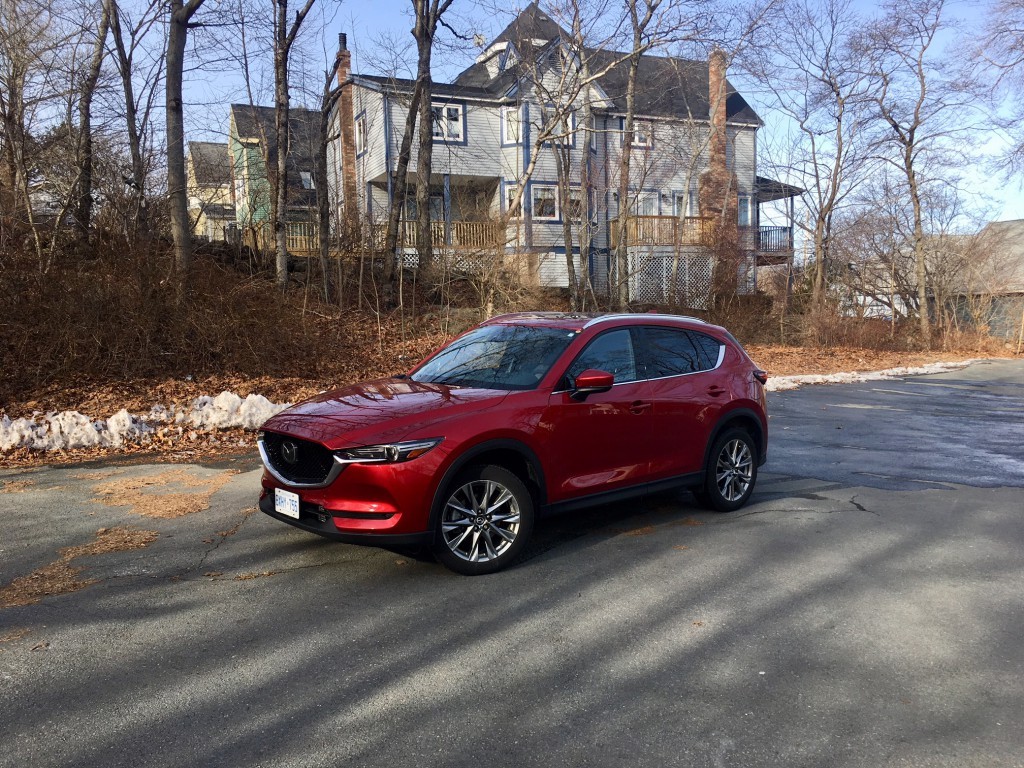 Things can happen fast in the automotive world when enough criticism is invoked. For instance, when the Kia Forte first debuted its interior was largely panned as being too cheap looking and feeling. Within six months of receiving the criticism, Kia had fitted the Forte which much better interior materials.

Back in 2012 when Honda made a misstep of assuming that people will buy a Civic purely because it’s a Civic, us auto critics panned Honda’s effort for the 2012 model year Civic as being lazy, unrefined, unimaginative, and almost worst than the Civic it replaced. After  taking our concerns seriously, Honda had completely re-worked the Civic returning the nameplate to the positive type of reputation it has always enjoyed within just a year.

And when Mazda launched the all-new 2017 Mazda CX-5, the criticism was also fierce. For instance, when I first review it, I threw around terms like ‘premium’ and ‘a class above’.  I mentioned that I had formed a “decisively positive opinion” of it, almost immediately.

Okay, okay, those obviously are not criticisms. In fact, if you read or watch any review of the CX-5 almost all will yammer on about how great the vehicle is with its gorgeous lines, premium interior, zoom-zoom inspired performance, and near perfect size.

So why then, after only two model years, has Mazda gone and significantly updated the CX-5 when it continues receives nothing but high praise? 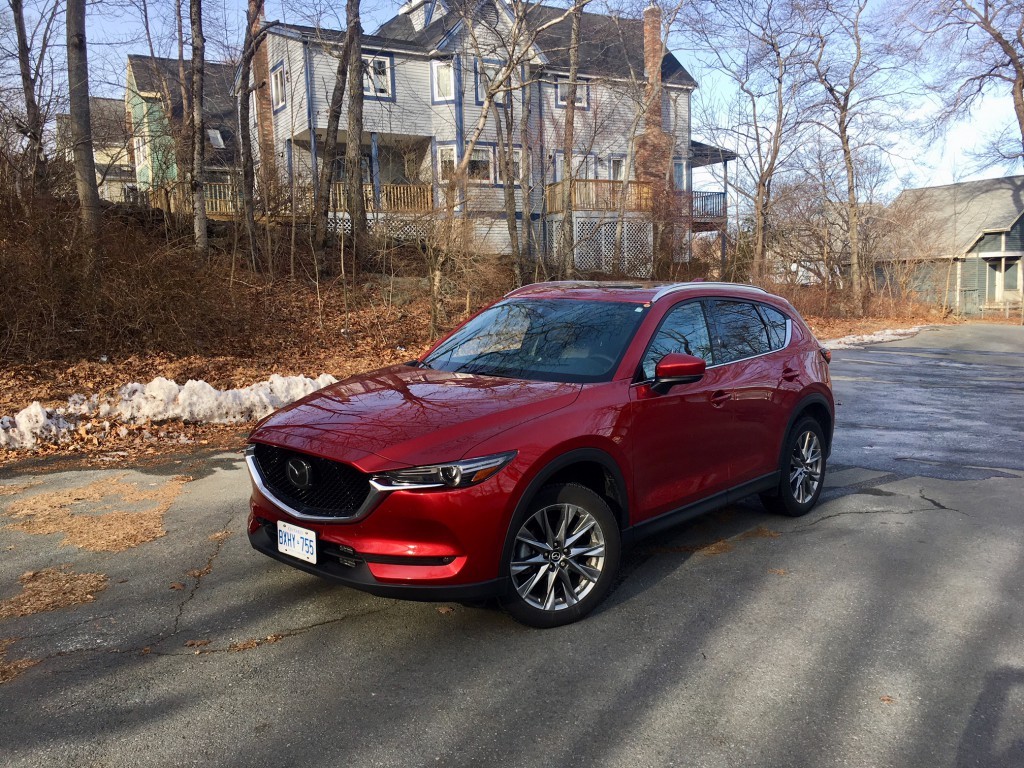 There are a few reasons, but likely the biggest is due to the fact that the CX-5 plays in an extremely competitive and lucrative segment. By now, you’ve likely heard that the whole world has gone mad for SUVs and are perfectly happy to give traditional passenger cars the boot. I have strong opinions on why the whole world is wrong with this one, but I will digress.

So, in order to stay in the fight within this segment, you really need to bring your A-game along with a fair amount of innovation and value. 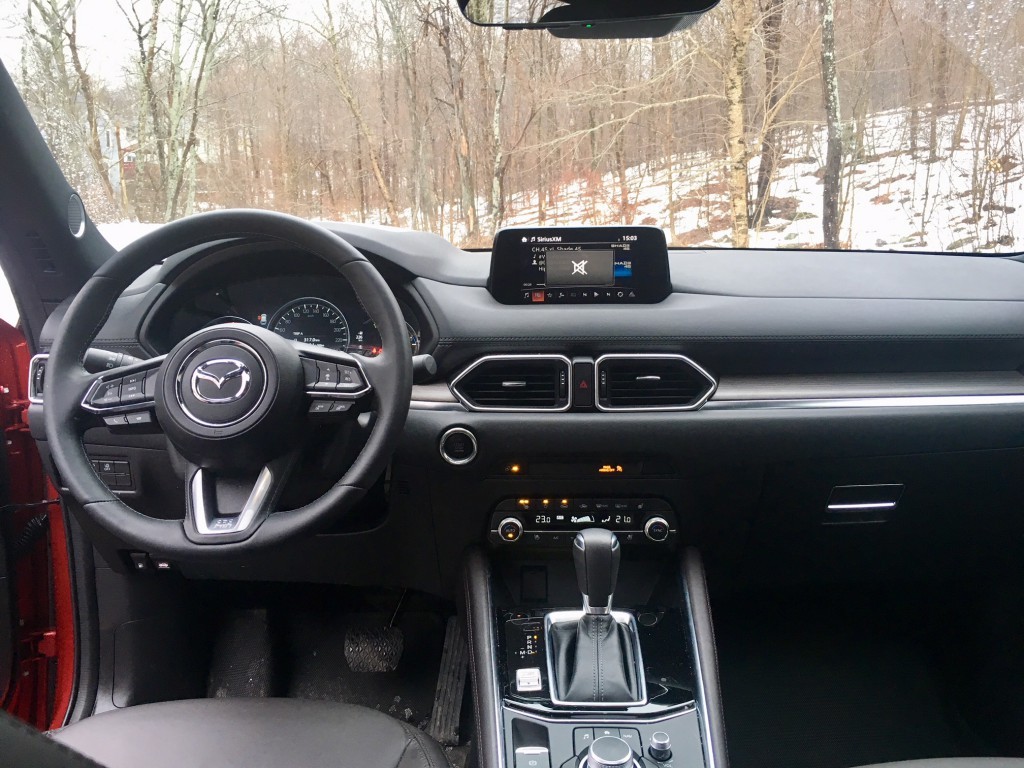 What has Mazda done to achieve this? Well, not much when it comes to the exterior looks. The 2019 model looks largely the same as the 2017 model. The only real noticeable difference is a different wheel design for upper trim levels. That’s it. And rightfully so, to this author’s mind. Mazda continues to have the sleekest, best looking offering in the segment. No need to mess about with it too much. 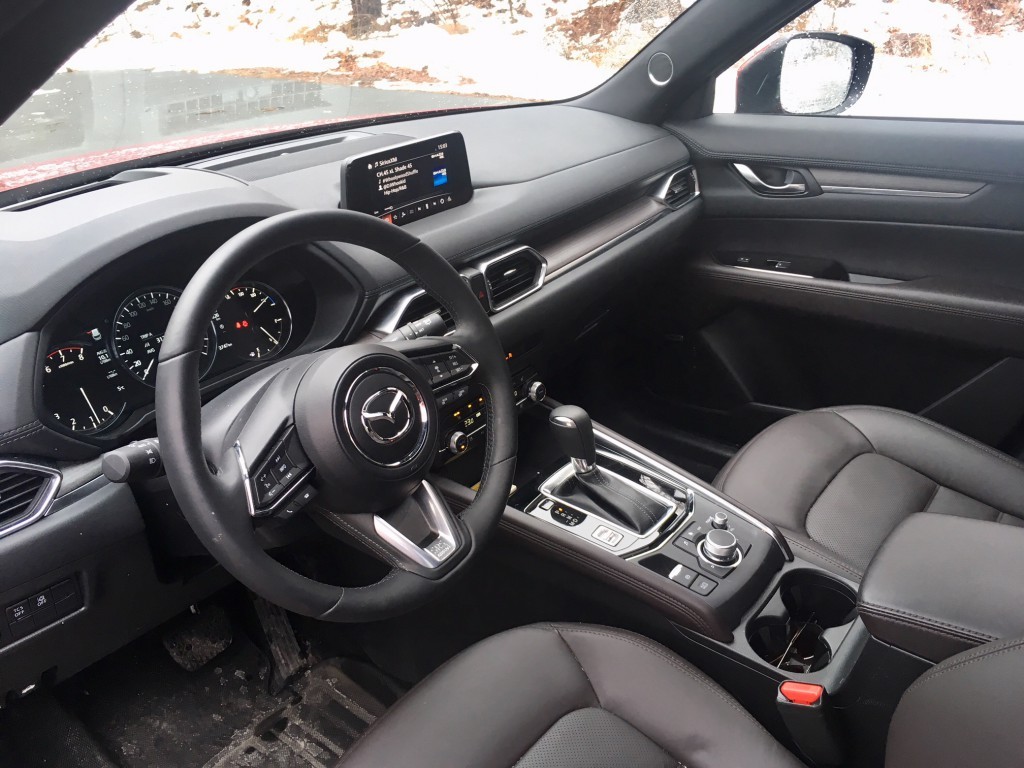 Inside is where Mazda dedicated a lot of its time doing updates, by adding a new top of the line trim level called Signature. Mazda’s Signature trim was first introduced on the largest CX-9, and later found its way onto the redesigned 6 sedan. It’s only natural that it found its way onto the CX-5 and don’t be surprised to see it trickle down to the rest of the line eventually. 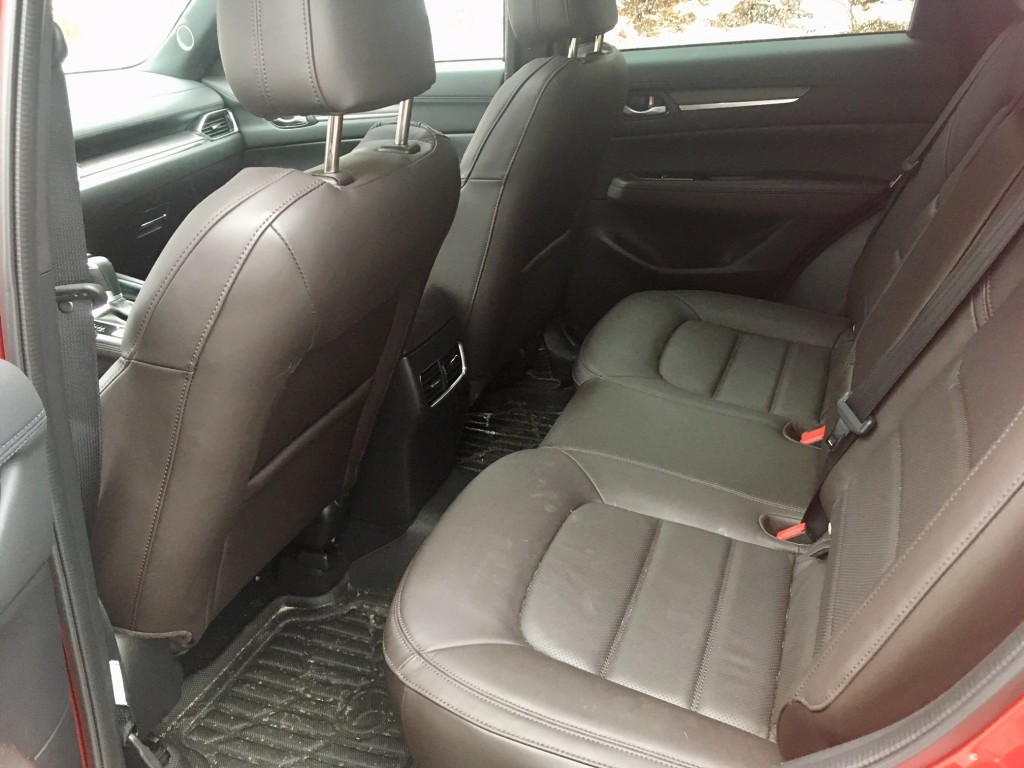 What the Signature trim adds is even more premium to the already premium looking and feeling interior of the former top GT trim. What do I mean by premium? I’m talking real Abachi wood inserts, cocoa brown Nappa leather seats, ambient LED lighting, power folding side mirrors, a frameless rearview mirror, a digital instrument cluster and the aforementioned new wheels which are 19-inches in a gunmetal finish. It’s all quite lovely but already I have a criticism. 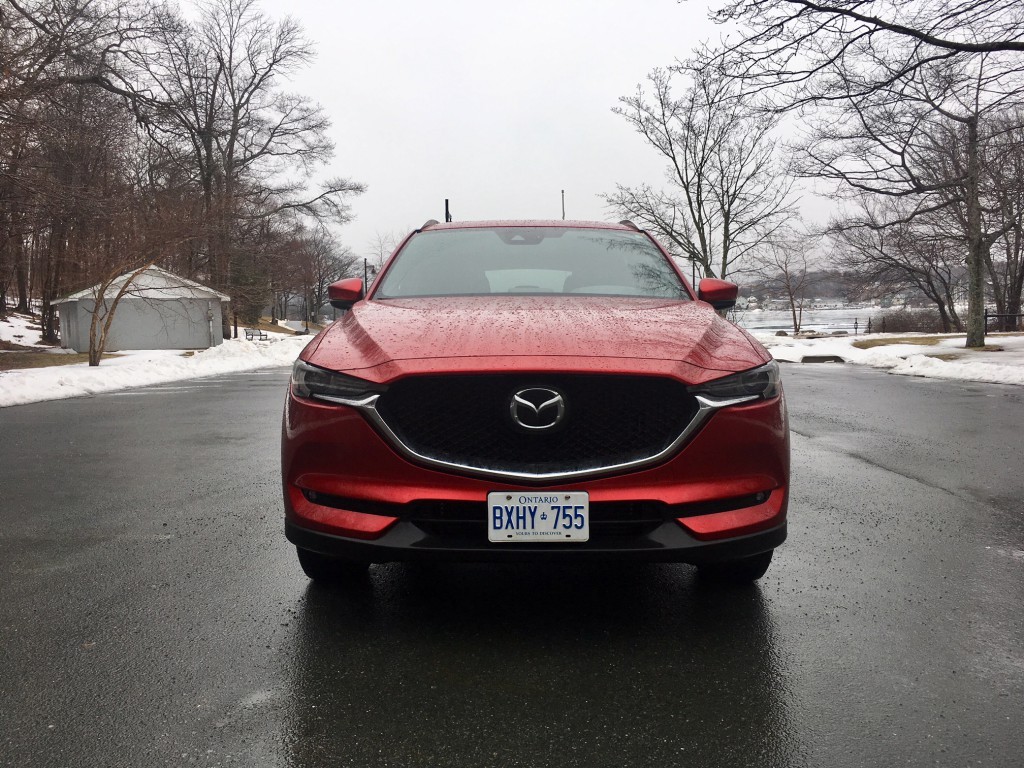 Most of my friends and family who spent time in the new CX-5 agreed it was very nice inside with soft, high quality materials but every person didn’t notice that the seats were actually brown and that the Abachi wood trim was even real wood. The big reason why is due to the colour scheme Mazda chose for my tester. Dark brown and black don’t contrast enough for the human eye to immediately distinguish them. What’s the point in paying for all the extra fancy stuff if it’s barely noticeable in the first place? A contrasting lighter colour such as beige or cream would have made this interior pop a lot more and would provide a lot more justification in spending the extra dough. 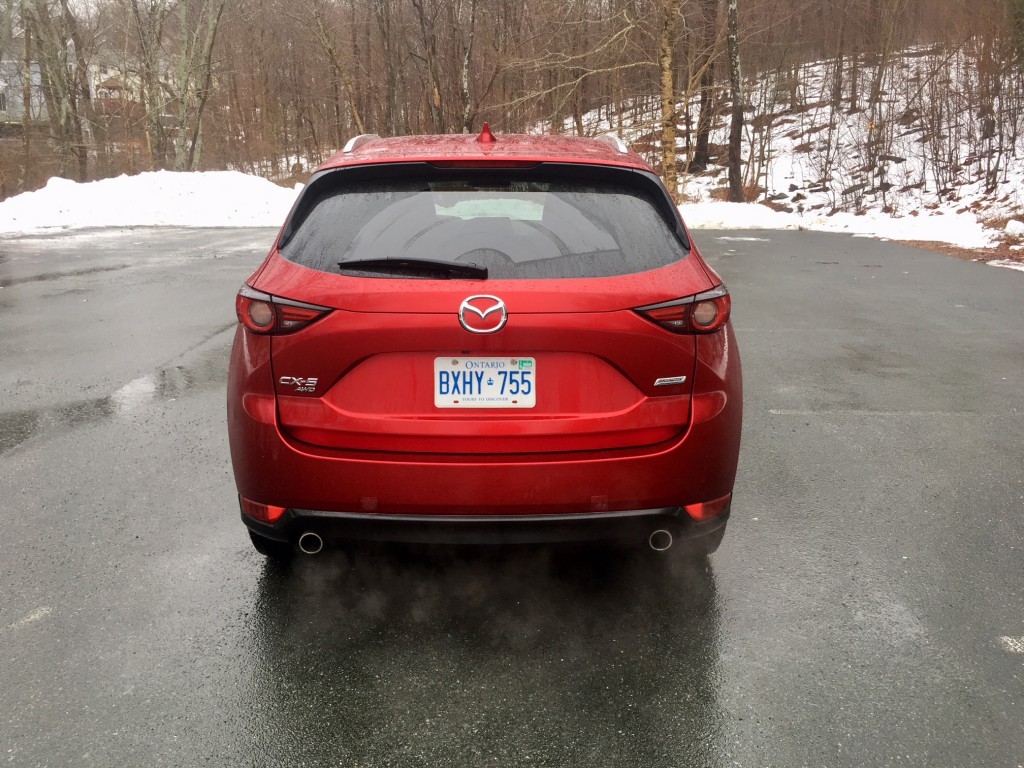 One small thing is the fact that the CX-5 in Signature trim offers a head up display. I didn’t even realize it until the last couple of days because the display was positioned way too low. I didn’t have my seat at a low position either and there seemingly is no way to reposition the display.

Otherwise, the CX-5 continues to impress inside with good room in all seating positions and a decent amount of space in the back. Though it should be noted that its competitors offer more space, in some cases, significantly more space. 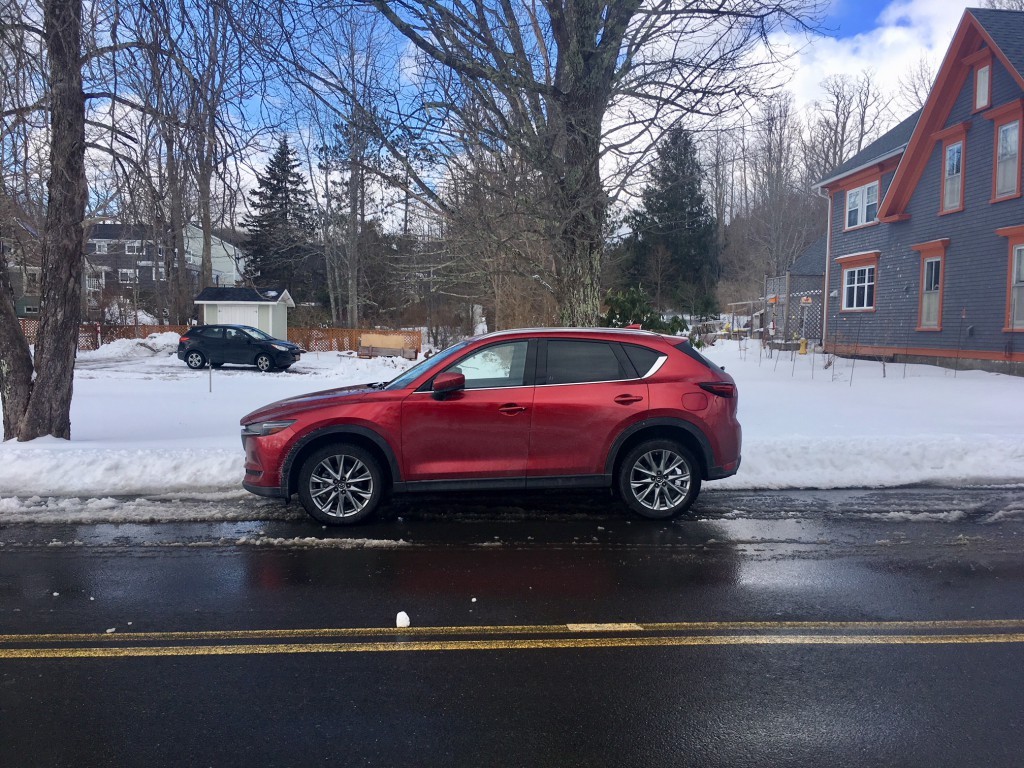 Another thing that should be noted is the steering wheel (which gets hand stitching in Signature trim) and the infotainment system. The steering wheel itself is fine, and I appreciate that it’s heated, but it only heats the sides of the wheel. I’m not sure if this was done on purpose in an effort to keep the driver’s hands and 10 and 2, but even the most defensive driver will eventually have to touch other parts of the wheel. If you’re going to offer premium features, don’t cheap out by doing the bare minimum. 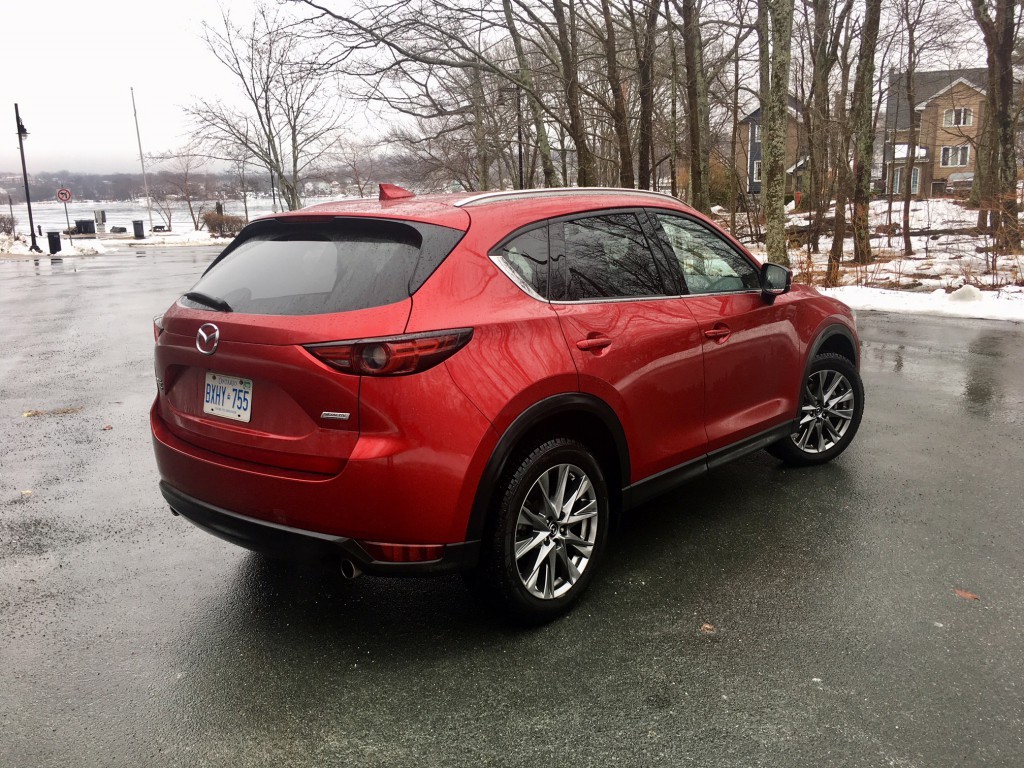 The infotainment system continues to be painfully dated and unintuitive to use. I understand that since Mazda is a relatively smaller company they may not have the immediate means to update it as quickly as its competitors. However, I would have preferred if they invested the money into updating the infotainment system, rather than spend the money on fancy Signature features, which of course are nice to have, but not strictly necessary. Of note though, the system is at least smart phone compatible now. 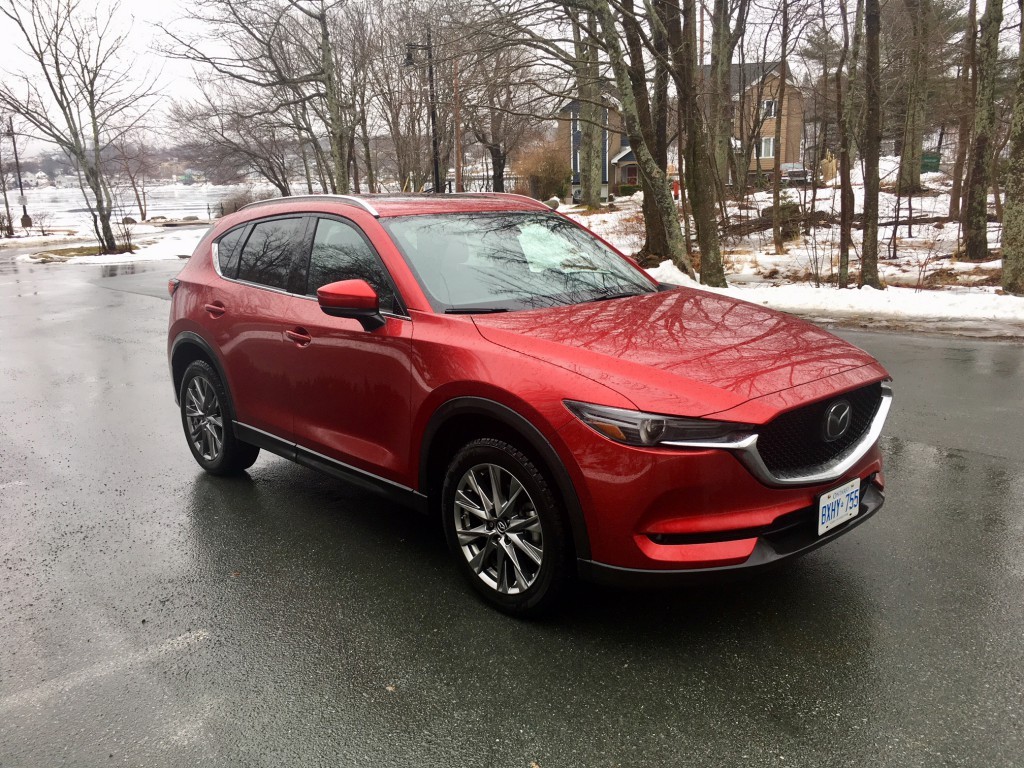 The other big change Mazda included for 2019 is a new engine option and it’s a familiar one. The 2.5 turbocharged 4-cylinder found in the CX-9 and 6 is now available in the CX-5. It’s a SkyActiv unit mated to a six-speed automatic. The unit puts out different horsepower figures depending on which grade of fuel you use. If you choose regular fuel power will come in at 227 horsepower. If you choose the fancier stuff, you’ll net 250 horsepower. Torque stays the same at 310 pound feet, regardless. That’s actually the number that most people should be looking at. While it’s cool to be able to increase your horsepower almost on a whim, that torque figure is easily best in class and is readily available at low RPMs. In other words, for most driving scenarios, the torque is doing most of the work – and it’s good to have a lot of it available. 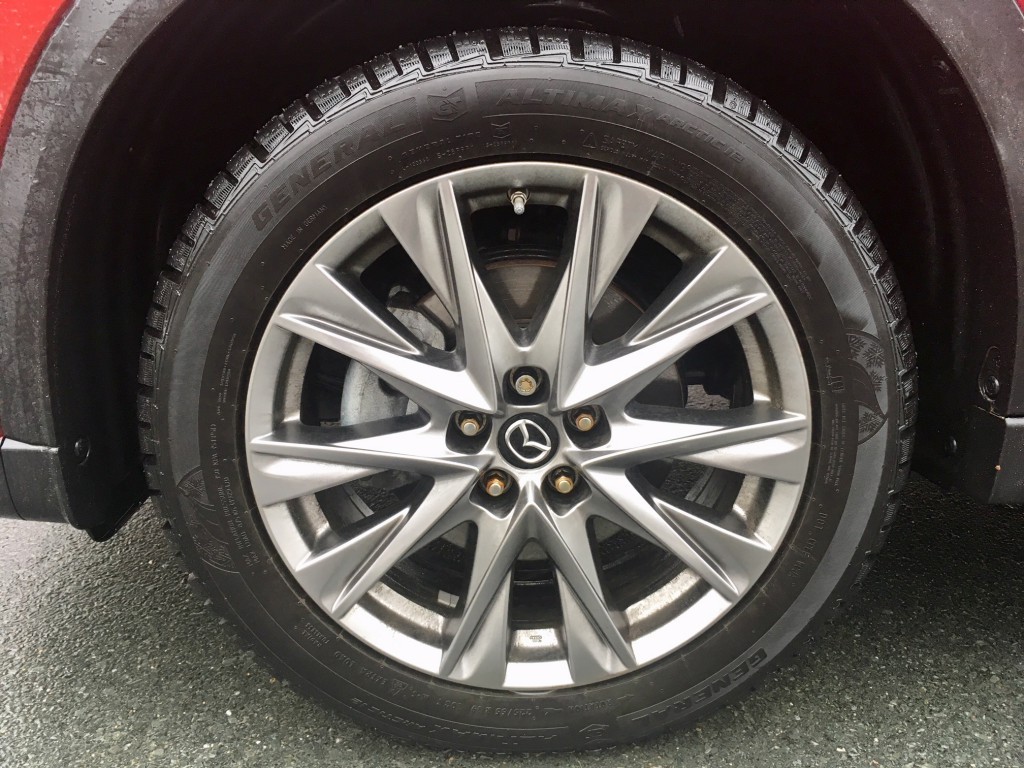 The end result is a much needed boost in power which makes the CX-5 much more competitive in the class. Off-the-line performance is noticeably improved and while the engine emits an odd sound when pushed (it sounds almost like a 5-cylinder), it largely stays out of the way for more leisurely driving. There’s a sport button which opens up the taps a bit more, but to be honest, there isn’t a significant difference. 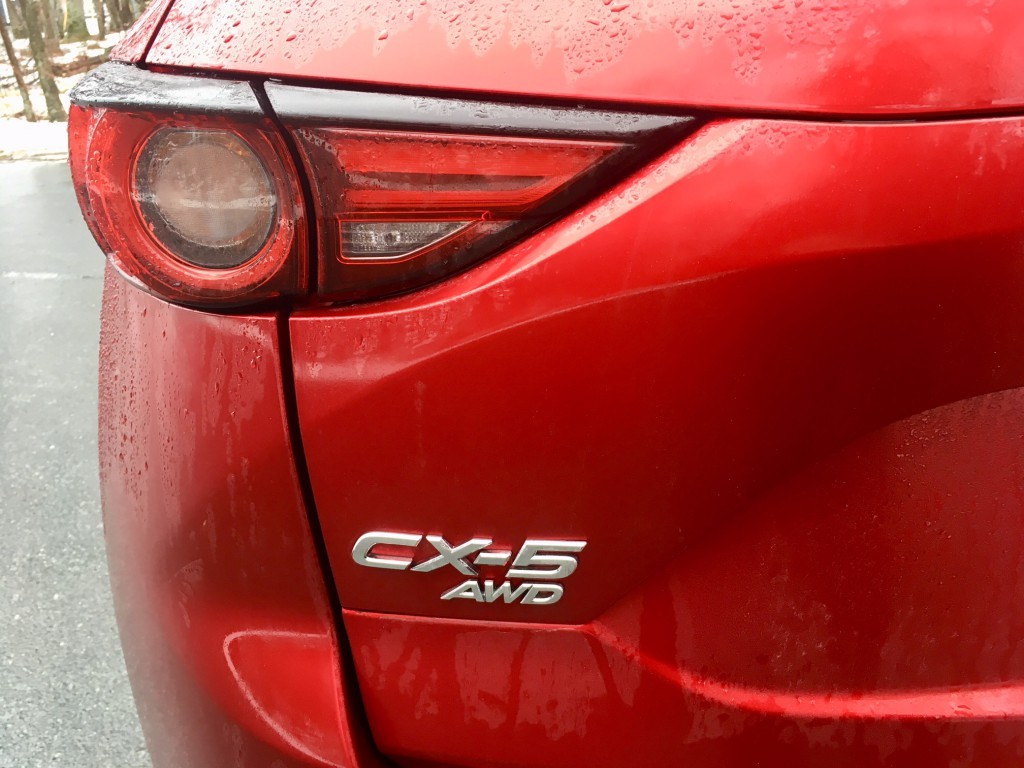 Another notable update for 2019 comes in the form of updated underpinnings. The front suspension has been re-worked to reduce understeer and new dampers are tasked with keeping you from spilling your tea when traveling over bumps and potholes. There’s also an updated G-Vectoring system which improves steering and uses active braking to control turn-ins (and turn-outs). While I’m sure these have a noticeable impact on dry surfaces, I wasn’t really afforded the opportunity to confirm that theory since the roads in Nova Scotia are filled with potholes and lined with dangerous amounts of salt making any type of spirited driving a risk not worth taking. 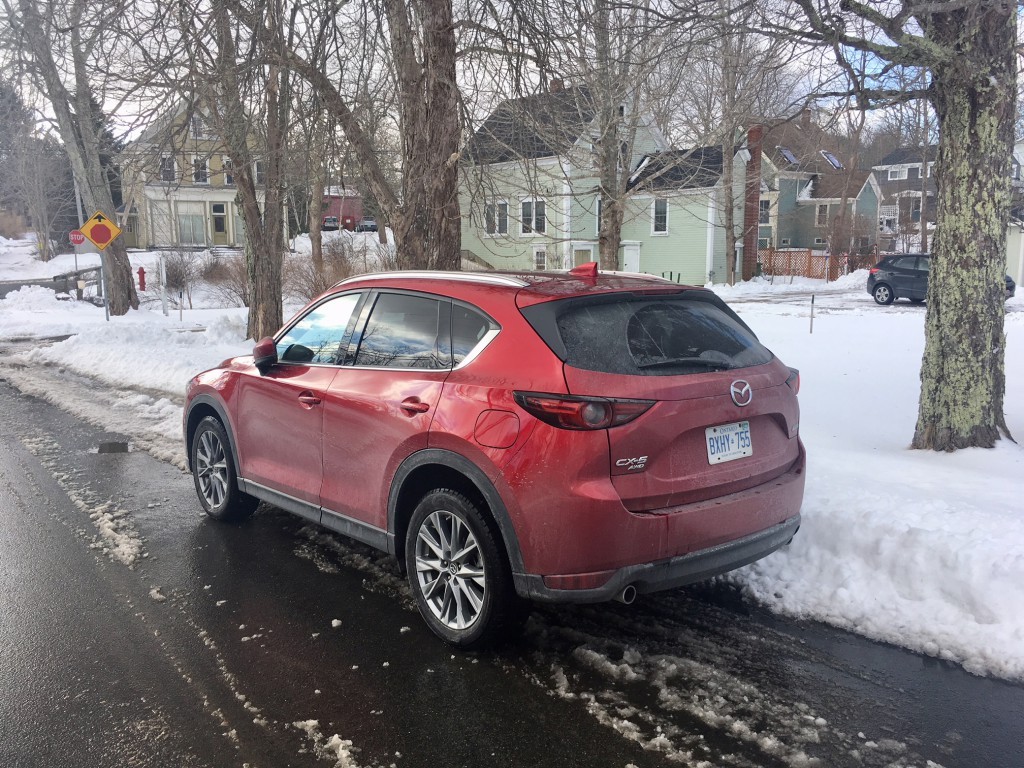 Still, we did get at least one storm (comprised of snow, sleet, ice pellets and rain – yes, all within hours of each other…welcome to Nova Scotia…?) which gave me the opportunity to test these new tweaks in adverse conditions. The CX-5 handled most situations a lot more confidently and it even allows you to break the tail end loose for a bit of fun slides in the snow. Uh, not that I condone such behaviour in the middle of a storm. Ahem. It was difficult to get it to lose traction too, but that could be chalked up to the heavy duty winter tires fitted to the tester which, by the way, where among the loudest tires I’ve ever experienced on any vehicle. The road noise was so incredibly intrusive to the cabin. I was willing to overlook it as I believe the added traction is more important. 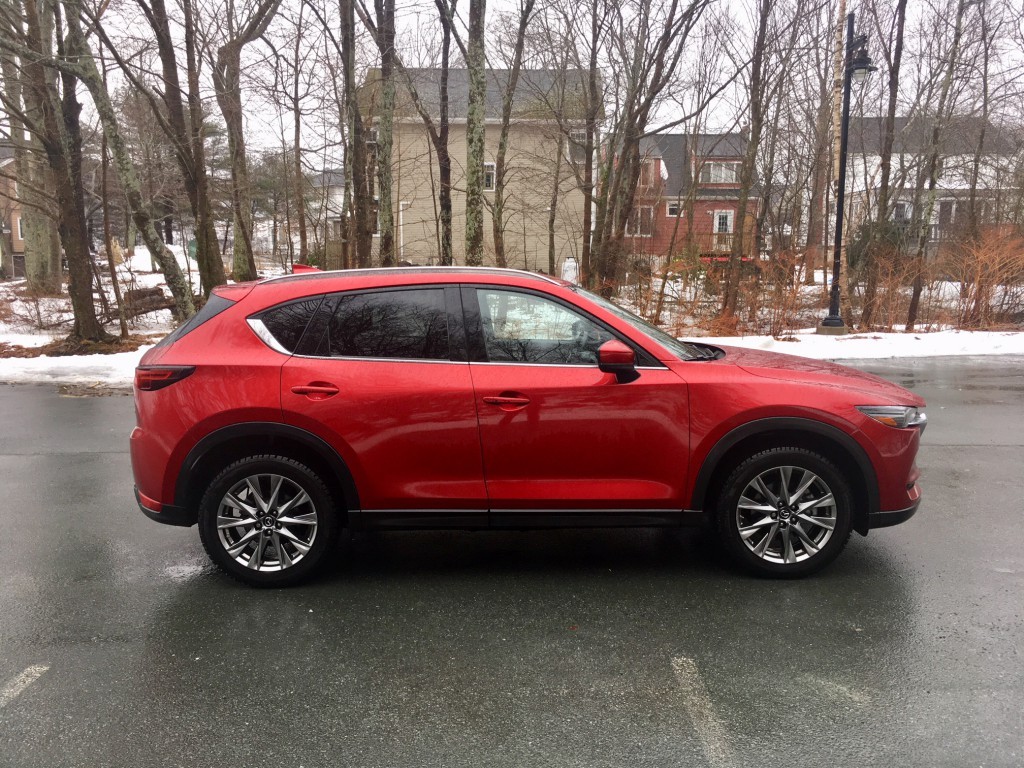 The new engine is officially rated at 10.8 L/100 kms in the city and 8.7 highway. After a week’s worth of mixed driving, included a road trip down the south shore of Nova Scotia, I returned 10.4 L/100 kms. I would have expected better results, but one must keep in mind the brutally cold temperatures most of Canada has experienced so far this winter, which has an adverse affect of fuel consumption. 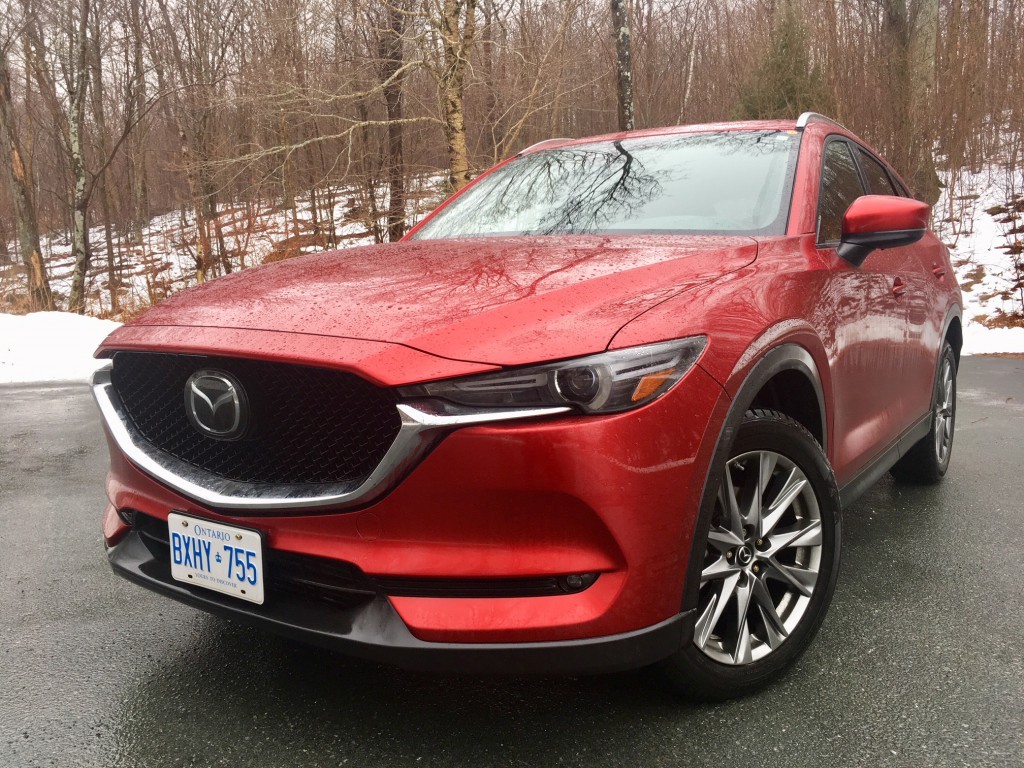 But overall, I must say, the new changes to the CX-5 certainly keep it competitive. It’s still one of my top pics in the segment and after having experienced it, my fiancee agrees. In fact, she is now seriously considering the CX-5 as a contender for when she decides to get rid of her Ford Fusion. While I don’t like the SUV trend, the CX-5 would make a solid choice for her as she does a lot of long distance travelling from the city to the country.

But even if your regular travel just includes the city, the CX-5 won’t disappoint.