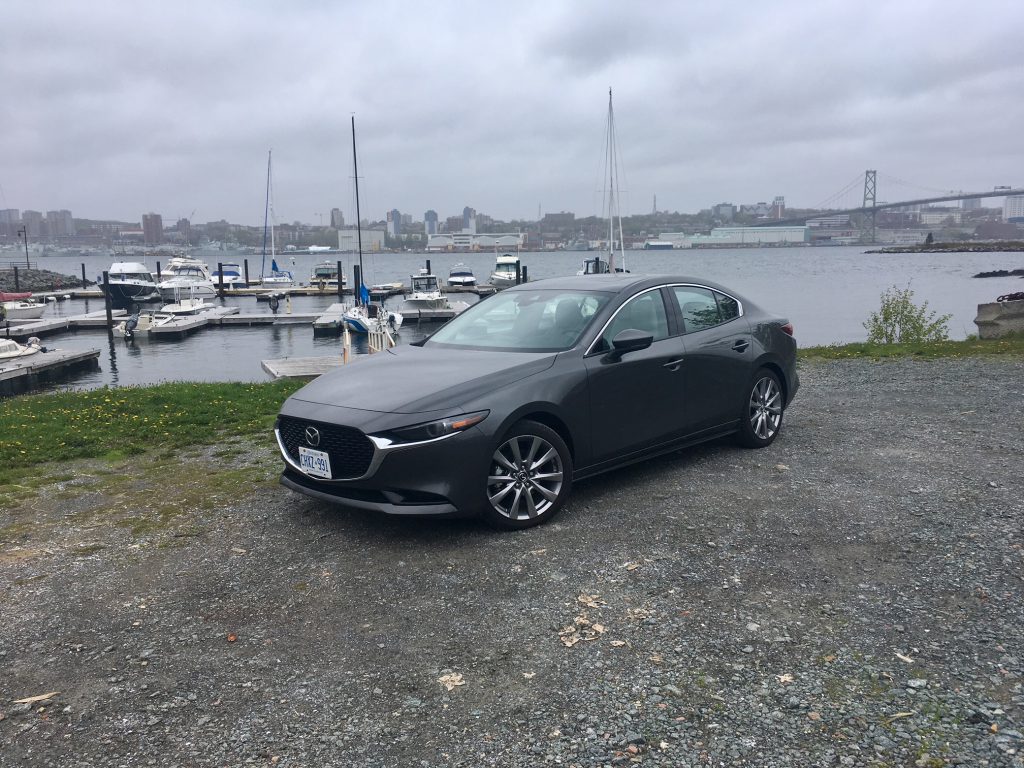 All it took was about a 20 kilometer trip behind the wheel
of Mazda’s new compact sedan before I was able to form a rather pointed first
impression.

“Well, you’ve certainly matured,” I said to myself after
parking in my driveway.

Mazda3’s of the past were always marketed as – and indeed actually were – a fun-to-drive vehicle that embodied Mazda’s old ‘zoom zoom’ mantra. They looked the part both inside and out and, most importantly, walked the talk. Or is that drove the talk?

The new 3 doesn’t have much of that left, in my opinion. Let’s start with the exterior design. In sedan form especially, the new 3 looks as if it’s settled comfortably into its early 30s. It takes on a more elegant look, but it still doesn’t stray too far from its youthful appearance of the past. It looks like it may enjoy a night at a symphony, but will still back it up on the dance floor if any old school track from Ludacris comes on. It has a long sleek hood with sleek headlights and a wide and pronounced grille. The rear takes some cues from the old Mazda6 to my mind, but that isn’t a bad thing. Circular tail lights still lets everyone know it’s down for beer and wing night, not just a five star meal. An interesting thing about those lights is that they are all LED (meaning the head, tail, brake and turn signal lights) regardless of the trim you choose, but if you choose a top trim, they illuminate differently. The wheels are stately, if a bit uninspiring. But overall, the look works well as an evolutionary take.

Inside is really where you start to realize the new 3’s maturity. My tester was the top tier GT trim, granted, but in any trim, this is hands down the nicest interior money can buy in the segment right now. In fact, it probably bests more expensive offerings outside the segment. The dash in particular is simple yet elegant and the infotainment unit is integrated so seamlessly and fluidly with the rest of the dash design – something even the likes of Mercedes seems unable to accomplish these days.

And speaking of infotainment, the whole system has finally gotten an update. It is completely revamped with a more simplistic vibe. It is still operated by a premium feeling knob between the seats, which makes for easier and more responsive operation than a typical touchscreen. My only gripe is how difficult it is to tune or scroll through simple radio stations. Before you had to click between two to three different sub menus. Now? You have to scroll between two to three different sub menus. Maybe I didn’t spend enough time playing around with its operation, or maybe the solution was right in front of my face, but I couldn’t figure out how to do it in a more simplistic way. Another sore spot is the channel list. Each time you select it, it starts from channel 1. So if you are on channel 158 and are curious what’s being played on channel 168, you need to scroll all the way from channel 1 to 168. You can’t just scroll up 10 channels from where you were. Again, maybe I just needed more time with the system, but as someone who reviews a different vehicle with a different system each week, I found this one difficult to figure out. This may be a non-issue if you prefer to listen to music via your phone because it comes with Apple Carplay and Android auto.

Thankfully the interior impresses in other ways with a proper head up display projected onto the windshield, supple cream coloured leather with comfy seats to match, and a Bose sound system. If you’re the type that doesn’t like silence then you’ll want to take advantage of using the latter because the cabin is noticeably quieter. Very little engine or wind noise penetrates the cabin making for a more premium driving experience. But about that Bose system, the bass speakers aren’t located in the front doors like they typically are in any other vehicle. Instead they’re put under the cowling to reduce vibration. It’s little stuff like this which Mazda dedicated a lot of effort into addressing that makes this feel like a more expensive car than it actually is.

Interior room itself is good up front and adequate in the rear. Once your kids hit the teen years, they may start to complain about leg room though. Trunk space comes in at 374 litres with the seats up which isn’t vast by any means, but it will do the trick for most.

In Canada, we have two power trains to choose from and they are both carryovers from the previous generations. That means the 2.0 litre 4 cylinder making 155 horsepower and 150 pound foot torque is still what you get in the base and mid trims as standard. The 2.5 is back unchanged at 186 horsepower and ditto torque. Both are mated to your choice of a six-speed manual or a six-speed automatic. But here’s where things get a bit complicated. The manual is only available on the base and mid-trim in the sedan, but it’s not available in the top trim. However, the six-speed manual can be had in the top trim of the hatchback. However! The manual is only available in front-wheel drive, regardless of whether you go for the sedan or the hatchback. Wait, what? Isn’t the Mazda3 front-wheel drive only anyway? Not anymore, dear reader!

For the first time ever, Mazda is equipping the 3 if
all-wheel drive if you so desire it. And it’s available in both the sedan and
the hatchback except it’s not available at all on the base trim of either body
style.

Now, some might question the decision to put all-wheel drive in a compact car for a couple of reasons. Firstly, all-wheel drive systems add weight which means a bit of a penalty at the pumps. People tend to buy compact cars because they are inherently efficient, among other reasons. Secondly, even though I just said ‘people tend to buy compact cars’ they kind of don’t anymore. If you haven’t noticed, everyone is flocking to SUVs and crossovers of all shapes and sizes. So why did Mazda do this? Especially when the CX-3 exists, which is essentially compact hatchback with a raised suspension?

Well, a couple of reasons. Firstly, Mazda’s own research indicates that while most are flocking to SUVs, there’s a significant group of people still sticking with compact cars, only they are now going upmarket to vehicles like the Audi A3 sedan, where all-wheel drive is available and is usually selected as an option. Secondly, while the CX-3 might have a ground clearance advantage (not much though, 6.2 inches compared to the 3’s 5.5 inches), it is noticeably smaller inside than the 3. The hatchback version of the 3, with all-wheel drive, offers more space. And not only that, it offers much more power than the CX-3’s 146 horses.

Getting back to the maturity of the new 3, it feels different in the corners now. That could be because the old 3 had an independent rear suspension set up, and this new version does not. It makes due with a torsion beam. Before you scoff, I can report that while it makes the vehicle feel differently, it certainly doesn’t feel worse. It still feels quite composed and planted as it always haa, it just doesn’t do it with such bravado or drama as it used to. And besides, the new Volkswagen Jetta has a torsion beam in the back now and it certainly doesn’t make much of a noticeable difference in the bends either. It could be that I’m getting a bit older now, but this new set up certainly suffices for me, and it would be more than adequate for the average bear.  And before you go chalking a point up for the CX-3, it too comes with a torsion beam in the back.

But maybe the reason why the torsion beam seems like a non-issue is because of its torque delivery. It uses G-Vectoring Control Plus, which essentially aids in cornering abilities. Regardless of the reason, to my original point, the 3 still corners well, it just does it in such a way that is more restrained. Think of it as how you probably drank the most ridiculous and questionable alcoholic drinks back in your university days. Now that you’re more mature, you might still like to have fun with friends and have a couple of drinks, but now your drink of choice is fine wine. The effects are still the same, but one is more civilized now.

Official fuel consumption numbers come in at 8.4 L/100 kms in the city for the 2.0 litre, and 6.4 highway, if you choose the automatic. If you opt for front wheel drive and the 2.5, again with the automatic, you’ll get somewhere in the ballpark of 8.8 city and 6.6 highway. If you add all-wheel drive to that, like my tester, official numbers come in at 9.2 city and 7.0 highway. So you can see that all-wheel drive means more fuel, but not drastically more. And besides, during my weeks worth of mixed city/highway driving, I was able to return 7.6 L/100 kms combined. That’s quite good.

And the new 3 itself is quite good too. In fact, it’s the best it’s ever been. Sure, a part of me misses the old days of when the spritely, aggressive and in-your-face Mazdaspeed3 was still a thing, but since I’m more mature now, and so is the new 3, I can better appreciate its more civilized manners along with its subtle elegance in the way it drives. Add on the best interior you can buy in the segment with added all-wheel drive and you’ve certainly got yourself a winning formula, especially in Canada.

As a sidebar, we are all young at heart to some degree so if Mazda ever turns this new 3 into a speed3, I’ll be the first one at the dealership to try it out. Just sayin’.