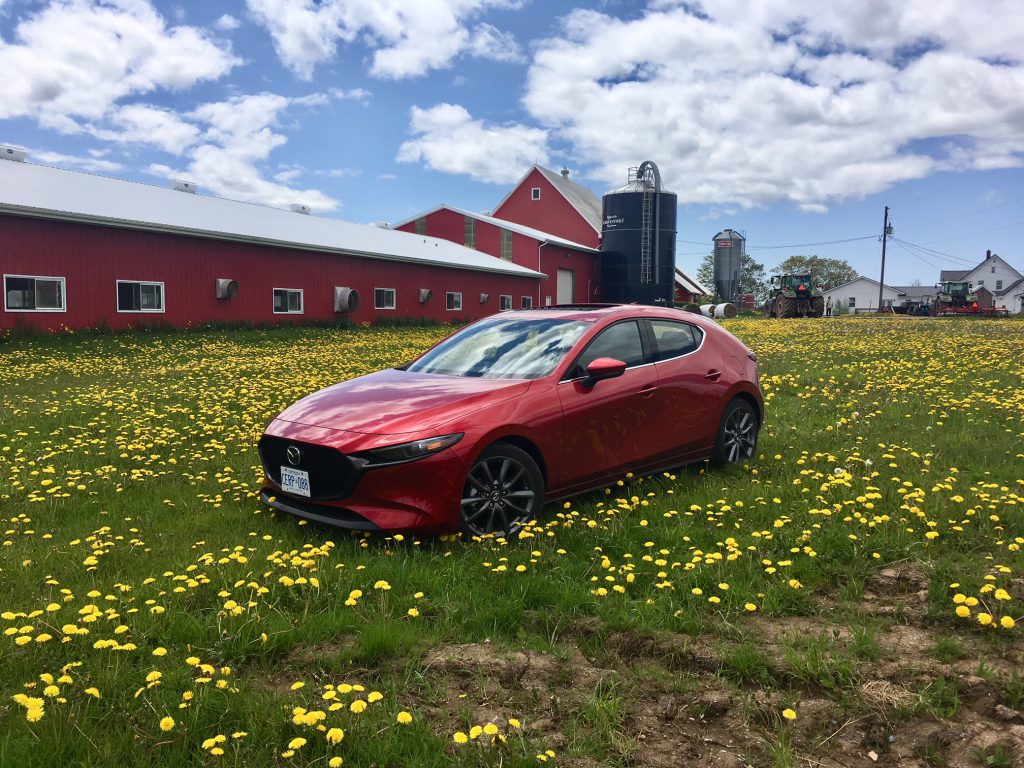 I
recently drove the redesigned Mazda3 sedan. It was equipped with an automatic
transmission and all-wheel drive – the latter being a first for Mazda’s compact
offering.

I personally came away quite impressed and described it as premium
feeling with a top of class interior. It felt like a more expensive vehicle
than what it actually is and it certainly is the most mature 3 I’ve ever
driven. That 3 is made for grown-ups.

So then, it came as a bit of a surprise when the hatchback
or Sport version made it way to my driveway and I couldn’t describe it as
mature at all, at least not immediately. This 3 did not have all wheel drive
and it had a manual transmission. It also came with soul red crystal paint and
dark coloured alloy wheels.

But that’s not a bad thing. In fact, that’s exactly what the
3 has always been known for.

What the hatchback has never been known for is its Alfa Romeo Brera-like shape. This is one interesting and perhaps unusual design. For instance, there are no character lines. It’s just one big smooth blob. That means that the light and reflections of different objects  near it create their own illusions of strange shapes and lines into the body. I like that. I also like the sizeable amount of sheet metal in the rear quarter panel. That’s where I see inspiration from the Brera. And if you’re going to be inspired by another automaker’s design, you really can’t go wrong with Alfa Romeo. The Sport gets a black grille with black trim and like the sedan, all lighting is LED regardless of which trim you choose. Kudos for doing that, Mazda! If you hunch down and take a look at it from the rear, it has a unique circular shape that I don’t think I’ve ever seen on any vehicle.

Inside, the design is still top notch, but my tester didn’t immediately exude the premium look that my sedan tester had. Instead it has a sportier look, though quality of materials could still be described as premium. The infotainment screen is well integrated into the design, but as was the case with the sedan, I found the re-worked system still took some getting used to. The new 3 is Apple CarPlay and Android Auto compatible.

Despite the hatchback’s more sporty nature, interior noise is noticeably reduced making for a calm and relaxed ride when needed. If you find yourself driving a bit more spiritedly, some engine noise makes its way into the cabin, but it’s not overly harsh.

Passenger room in the rear is adequate for most, though getting in and out of the hatch requires a fair amount of ducking so you don’t hit your head. Also, the shoulder lines curve upward at the rear reducing rear passenger visibility to the outside world. It also makes for a bit of a claustrophobic feel back there. You didn’t think Mazda’s stunning new design would make for no compromises on functionality did you? Luckily the hatch redeems itself with more cargo room than the sedan; over 20 cubic feet compared to the sedan’s 13. With that said, the cargo area itself is shallow.

My top tier GT trim gets a 2.5 litre naturally aspirated 4-cylinder which produces 186 horsepower and 186 pound foot torque. Thankfully Mazda Canada equipped my tester with a six-speed manual but a six-speed automatic is also available. Like the sedan, all-wheel drive is also available in hatchback form, but it can only be equipped with the automatic. If you want to row your gears yourself, front-wheel drive is the name of the game.

When I first drove the all-wheel drive sedan, as mentioned, I described it as mature. You could still have a fair measure of fun with it, but it was clear that Mazda had given it a new personality than the one it has always had. And if that’s the personality you’re after, then the front-wheel drive with manual will be more familiar to you. There’s still a hint of maturity and seriousness to its drive, but it will still happily take you around corners with a fair measure of grip and gusto if needed. The sporty hatchback will calm down and act like my past sedan tester if needed though. For instance, it rides smoothly and calmly on the highway.

My only real gripe is, even with the ability to shift gears yourself, meaning a better ability to get it to redline, the 3 still doesn’t feel particularly fast. It certainly can’t be described as slow but with only 14 horses short of 200 horsepower, I would have expected it to feel quicker than it does. This is where Mazda truly has the opportunity to add in a turbocharged engine. And guess what? It already has such a thing. The turbo engine produces either 227 horsepower or 250 horsepower depending on which grade of fuel you use, plus a whopping 310 pound foot torque. And Mazda is apparently eager to plunk this engine in almost all of its models as it’s available in the CX-9, the CX-5 and the 6. So who knows, maybe it will find its way to the 3 eventually, but that’s likely as far as they would go. They’ve made it perfectly clear that they are done with all MazdaSpeed models, sorry to say.

Part of the reason why they’ve abandoned the speedy zoom zoom way of doing business is the obvious desire to rebrand itself as a classier car brand, but also because fuel economy is top of mind for any mainstream automaker. Mazda uses SkyActiv technology to achieve that (no hybrids in the lineup, though a diesel has finally found its way into the CX-5). The end result varies depending on how you equip your 3.

If you get the 2.5 litre engine (a 2.0 litre is available with less power, but better efficiency) in hatchback form with front-wheel drive and a six-speed manual like how my tester was equipped, it gets a rating of 9.2 L/100 kms city and 6.6 highway. My real world mixed highway-city driving got me 8.3 L/100 kms. Not great but not bad. Still, that bests the all-wheel drive version with the six-speed automatic that comes in at 9.8 city and 7.4 highway. If you go with front-wheel drive with the automatic transmission, official numbers will come in at 9.0 city and 6.8 highway. It should be noted that the 2.5 litre comes equipped with cylinder deactivation – regardless of transmission choice – which helps out to keep gas guzzling to a minimum.

But I’m glad Mazda sent two very different versions of the same car to me to try. While I came away impressed with how well the sedan with automatic and all-wheel drive does in terms of maturity and premium feel, for me, the hatchback with a proper manual and front-wheel drive is more my style. It’s still mature and premium feeling but it feels more willing to open up to its sporting heritage than the sedan, as it was equipped, did. That eye-catching body style seals the deal.

Truthfully though, you pretty much won’t go wrong no matter how you spec your 3. Not only does it still retain its reputation as being among the more fun-to-drive in the class, but it can throw a knock down punch to any rival that claims the crown for luxury, quietness, maturity and premium feel.