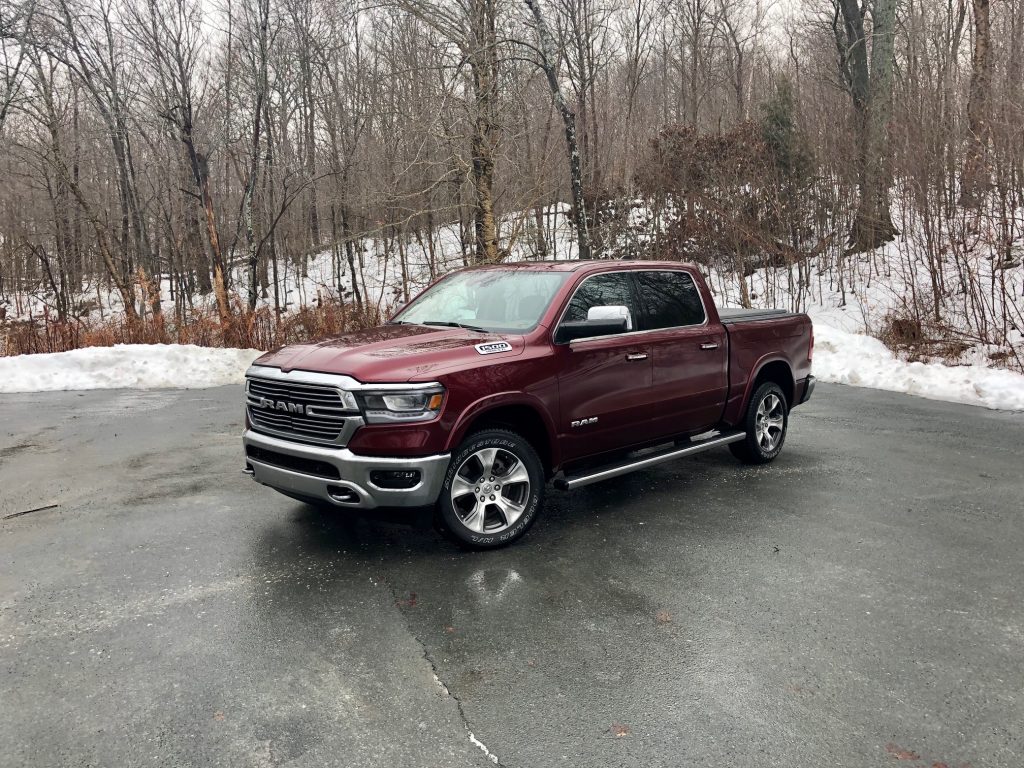 I’ve driven fully loaded F-150’s before, Silverados, Tundras – all the typical players, and the interiors of those rigs pale in comparison to the Ram 1500’s interior.

The first thing that will likely grab your attention is the large vertical touch screen that likely took some cues from Tesla or Volvo. It can be a bit intimidating at first – my wife immediately became overwhelmed when I asked her to change the radio station for instance, but as is the case with most modern day FCA products, it becomes easy to grasp to after only a couple of tries. On top of that, it responds to commands quickly and provides a sharp brightness that makes every single icon super clear and easy to identify.

Now, some may not like how a lot of functions are operated through the screen. I’d appreciate hard buttons for the heated seats and steering wheel for example, but there are still hard buttons for features that will most often get used such as the climate control, window defrost and radio tuning.

My tester came equipped with a Mountain Brown/Light Frost Beige interior which ups the ante even more. Everything feels of high quality – enough to justify the hefty price tag of close to $90K. Yes, this is a mid-trim level model and it still can be optioned out close to six-figures.

As you’d expect, interior room is cavernous and rear seat leg-room is certainly limo-like. Aside from the massive centre console which could easily swallow a large laptop, there’s storage underneath the rear seats as well. My tester came with a tonneau cover which helped to keep my aunt’s luggage dry as I drove her to the airport in a rainstorm. If all that storage including a bevy of cubby holes and crevices throughout the interior somehow isn’t enough for you, you can opt for the Rambox feature for $1,300. It was equipped to my tester and it will add extra lockable storage on both sides of the bed – but keep in mind, this feature also eats into bed space making it narrower.

The interior certainly isn’t the only notable thing about the 2020 model year Ram 1500. A new option is an e-torque system added onto the 5.7 litre Hemi V8. Explaining this system in laymen terms is difficult, but the gist of it essentially means an extra 130 pound feet of torque on tap and ready to go whenever you are. And it’s ready to go no matter what the situation. It doesn’t matter if you’re accelerating from a stop, or are hovering around 4,000 RPM. It’s there, instantly, when you put your right foot down. It’s almost like a mild-hybrid system where it can self-generate electricity, meaning it can give you that extra punch without using a drop of fuel.

Now, I had to double check to make sure my tester was actually featured with this option because there is no discernible difference from the regular Hemi V8 in the sense that all you need to do is just drive and all the magic happens behind the scenes for you.

New for 2020 is also the availability of a split tailgate. This essentially splits the tailgate not quite down the middle, but it provides easier access to the bed. It’s great if you just want to pop a duffle bag in the back and be on your way, for instance. I have yet to try GMC’s version of the six-way split tail gate, but the way Ram does it certainly makes sense and makes it much more versatile.

Another notable feature is the air suspension system. It can be operated manually or automatically and it does exactly what you think it does – heighten or lower the suspension. When cursing along the highway the system will automatically lower the suspension to generate the least amount of drag for added fuel savings, for instance. And speaking of driving on the highway, my goodness, is it ever comfy. It glides over bumps and other imperfections with ease and without jostling passengers about too much. It certainly charmed us during our two and a half hour trip to Shelburne, Nova Scotia for a weekend getaway, and it handled the packed snow and ice with ease on the highway and back roads.

After about a week’s worth of mixed city-highway driving, I returned 13.7 L/100 kms. Considering this is a large half-tonne with a V8, that figure is actually fairly decent. I would imagine it could do even better without the frigid January temperatures.

Faults? Well, the keyless entry system doesn’t seem to like snow and ice. If there’s any of the white stuff on the door handle, it just won’t respond. Then there’s the dial that is used in place of a traditional gearshift. This has been featured on modern day Rams for a while now, but I still find it difficult to operate it without looking down at it. I tried a few no-look tries and kept grabbing the volume knob by accident. Or, if I wanted to turn the music down, I’d accidentally grab the gear shift. This once made the Ram completely fault abruptly into park when I was reversing out of a parking space. Also, my tester featured the chrome appearance package and I despise chrome about as much as the current President of the United States, but that’s obviously a subjective criticism.

And then there’s that price tag. While it is certainly a luxurious and capable vehicle, I can’t even begin to tell you what sort of vehicles you could get for 90K. A lot more interesting vehicles at this price point and a lot that will certainly hold their value better than the billions of pick-up trucks on the road.

But if you have the dough and fancy yourself to be some sort of posh off-roading enthusiast, this is the vehicle you’ll want to have.

Price As Tested (including fees and destination): $88,515

-Finicky keyless entry in snowy weather
-Still takes time to get used to gear shift dial
-90K for a pick-up truck is kind of insane. And it isn’t even close to the fully loaded trim model