RiverWalk spans nearly 3 miles along the Milwaukee River through the heart of the City’s Downtown and is divided into 3 sections: Beerline, Downtown and Third Ward.

Beerline known as “B” RiverWalk makes up the northern most portion of the system. This segment is primarily residential in character and spans from the former North Avenue Dam south to approximately Juneau Avenue.

The central segment is called the Downtown segment. This segment of the RiverWalk is a mix of residential and commercial surroundings and spans from approximately Juneau Avenue to I-794 freeway.

Historic Third Ward RiverWalk is adjacent to a mix of residential and commercial businesses and spans the distance from the I-794 freeway to the Harbour entrance to make up the southern most portion of the system.

Ghassan Korban, an employee of th City of Milwaukee was our tour guide walked us to the beginning of the Downtown segment on Wells Street.  Public art is rampid in the Downtown and along the RiverWalk.  Everything from jewerly dangling around bridge houses to huge ring like sculptures with old bowling balls and pins as the insets.

If you follow my Facebook or Twitter, you know I was excited to hunt down the infamous Bronze Fonz. Well, Good news!  I found it on Wells Street next to a chinese restaurant. Ghassan explained that the City has an agreement with the landowners which allow for year round access to the visitors of all 3 segments of RiverWalk.  Much like our Waterfront Development Corp. Ltd, The City and BID maintains the RiverWalk.Wisconsin’s Public Trust Doctrine places all lakes and streams in trust for the benefit of all citizens to use for commercial navigation, pleasure boating, sailing, fishing, swimming, skating, rowing, walking, and the enjoyment of scenic beauty. To ensure compliance with the Public Trust Doctrine, the Wisconsin Department of Natural Resources (WDNR) requested the City prepare a Master Plan to include the established guidelines for construction and use of riverwalks, as well as the location of proposed RiverWalk segments for future construction. 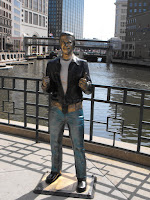 In 1993, expansion of the RiverWalk Initiative reinforced the City’s commitment for the design and construction of the RiverWalk. Consisting of 22 proposed segments, the riverwalk system would unify downtown attractions and become, over time, a significant attraction in itself. 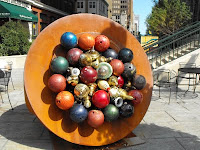 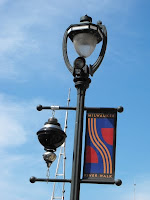 A resolution creating the RiverWalk Site Plan Review Overlay District (SPROD) and RiverWalk Development Fund was adopted in 1993. The RiverWalk SPROD ensures the creation of new RiverWalk projects which are compatible with their neighbors. It also encourages creativity, variety and excellence in design and layout. The design specifications associated with the SPROD apply to, but are not limited to, landscaping, lighting, accessibility, adjacent building facades and the ability to connect to future RiverWalk segments. The SPROD applies to the Third Ward, Downtown and Beerline portions of the Milwaukee River, extending 3.1 miles, along both sides of the River from the Harbor northward to the former North Avenue Dam. 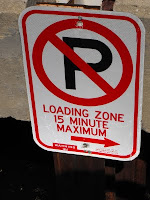 During our walk Ghassan explained how water taxis are being introduced to the RiverWalk experience.  Like Halifax Harbour, if such rights were given, they would probably be abused.  Milwaukee has introduced a loading zone concept that would make a water taxi idea viable for Halifax.  We need to introduce more innovative ideas like this to get people mobile using our wonderful harbour. Just think if we had such a system, people could move along our downtown and over to Dartmouth by a private operator.  It’s used in Vancouver and Victoria…  why not here?
Financed through a partnership between the property owner, the Greater Milwaukee Committee, and the City of Milwaukee, the Riverwalk continues to be maintained and promoted by the property owners in collaboration with the City formed a Business Improvement District (BID).
Bravo to the City of Milwaukee on this innitiative!  On the downside, the water in the the river was green and did have a lot of litter.