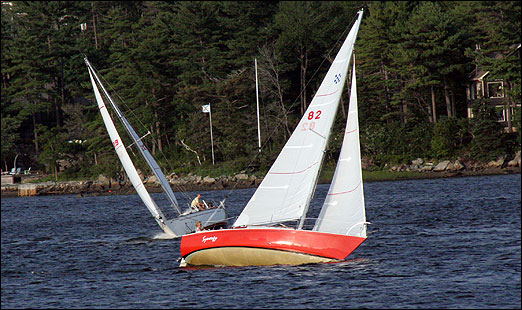 Sailboats from the Bedford Basin Yacht Club participate in a race on Wednesday evening.

Back in the day, Bedford was home to one of the most successful yacht clubs in Canada. Sailors regularly won regattas at home and around the world.

“Bedford won everywhere. We took home most of the silverware,” said Bruce MacCulloch, a former member of the Bedford Basin Yacht Club (BBYC).

On Wednesday, MacCulloch took a sail down memory lane as he spoke about the history of the Bedford Basin Yacht Club in front of a small audience at the Scott Manor House.

MacCulloch grew up on the shores of the Bedford Basin and calls the BBYC “home”.

Founded in 1953, the yacht club was first located in Mill Cove. The club was later moved to the site of the former tennis club on Shore Drive, and finally in 1980 it was rebuilt as the building we know today.

The yacht club had a ward room, a men’s-only space where members could enjoy drinks. A small window was situated at one end of the room and the women could order drinks, but they were not allowed to enter the room.

By the 1970s it was decided that women should be allowed access to the ward room, and surprisingly the idea was met with a lot of controversy, from both the men and women.

Many things have changed at the club since its initial opening. For example, women were not allowed to be senior members. But recently the club has had two women commodores.

But MacCulloch’s speech was not about the history of the building, or the events that were held at the BBYC. It was mostly about the closely knit people that gave it a heart.

Through highs and lows, through controversy and agreements, the members of the BBYC stuck together.

With a nostalgic tone MacCulloch reminisced about how in the seventies and eighties everyone pitched in and did their part.

If work needed to be done on the building, all the members would help put a fresh coat of paint on the walls of the building. After an event, everyone would contribute to the cleaning up of the property.

“Today, members just don’t seem to have the time,” he said. “They would rather contribute $20 and hire an outsider instead of finding the time to do it themselves.”

It wasn’t just chores that were done together. For example, playing darts together was a regular activity.

Every year, the members of the BBYC would write a Christmas play and perform it in front of an audience.

Today, the bigger and fewer boats docked at the club compared to the past seem to represent the loss of spirit and community that used to hold the members of the club together.

After the talk, the Bedford Beacon editor was honoured to be asked to tea by Fort Sackville Foundation member and life-long resident of Bedford, Margaret Embree.

The Fort Sackville Foundation is the volunteer organization that oversees the operation of Scott Manor House.