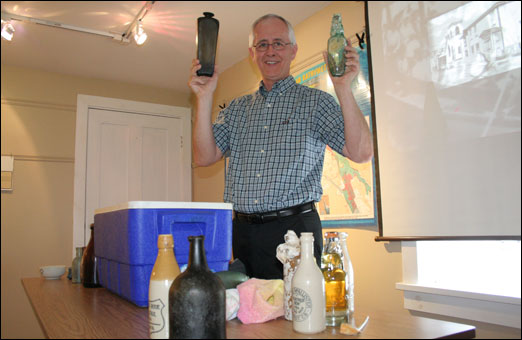 Author, historian and scuba diver Bob Chaulk shows some of the artifacts he has found in the Halifax Harbour. He spoke at the Scott Manor House on Tuesday.

Back in the 19th and early 20th century, medicine came in pretty little glass bottles. Often the medicine in these bottles would be sold as a cure for pain, insomnia or colicy babies.

“The reason they liked it is because it got them loaded,” said Halifax author, historian and scuba diver Bob Chaulk. “It got them high.”

Turns out some of the more effective medicines were heavily laced with powerful narcotics like heroin and codine. It wasn’t long before people became addicted to the medicines, which caused more harm than good.

“Some people actually became drug addicts because of the medicine they took as babies,” said Chalk, who has found lots old medicine bottles at the bottom of the Halifax Harbour.

Chaulk displayed a couple of these bottles while giving a talk about his diving adventures at the Scott Manor House in Bedford on Tuesday. Chaulk has dived 400 to 500 times in harbour and has written a book about it.

“Time in a Bottle: Historic Halifax Harbour From the Bottom Up” chronicles Chaulk’s adventures diving in the harbour while exploring sunken ships, sifting though live ammunition, and collecting timeless artifacts from Halifax’s long and colourful history.

The SS Atlantic ran aground and sank on Mar’s Head in Lower Prospect on April 1, 1873, killing 562 of the 952 on board. Cochkanoff, who died suddenly last year, spent 25 years exploring and researching the ship.

Besides medicine bottles, during is talk on Tuesday Chaulk showed some other fascinating artifacts he has retrieved from Halifax Harbour. Among them were two glass blown bottles from the late 1700s. One of them was a gin bottle from Holland, the country that invented the liquor.

Chaulk also had a variety of old pop bottles, many of them from local bottlers. The bottles, which were made prior to the invention of metal capping, came in all sorts of shapes and sizes as bottlers tried to figure out how to preserve carbonation.

One of Chaulk’s prized discoveries is a corked bottled of ginger ale from the 1800s with clear golden pop still inside. Other items he showed included a cobalt blue poison bottle, a clay tobacco pipe, an old porcelain toothpaste lid, a large bullet, and a fully intact plate from a Royal Navy ship.

Chaulk clearly has a strong passion for the harbour and the history that he has uncovered while diving in its deep waters.

One thing that gets under his skin is the common believe, especially among members of the media, that the harbour is dirty and unhealthy.

Chaulk points out that the harbour is still fished commercially for lobster. And while diving in the harbour, Chaulk has found himself swimming among thousands of schooling mackerel, which anglers actively catch and eat.

Although he admits that there some dirty spots, particularly where there is run off and sewage flows, Chaulk suggests the harbour is generally clean thanks in part to strong currents and tides which flush the harbour twice a day. In some spots, Chaulk has had visibility of up to 100 feet while diving.