I was in Sydney for less than a week before my first road trip.  We were attending an agricultural fair in Gunnedah, rural NSW and were among the 10,000 visitors who descended on the town each year.

The best part about this trip was the incredible scenery.  These shots were all taken from a car window and each mile  was more beautiful than the last.  The yellow fields of canola flowers stretched as far as the eye could see.  We drove past one of the largest Thoroughbred stud farm in the country; roadways covered in fresh cotton and idyllic lush rolling hills. 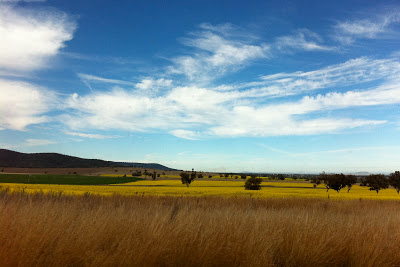 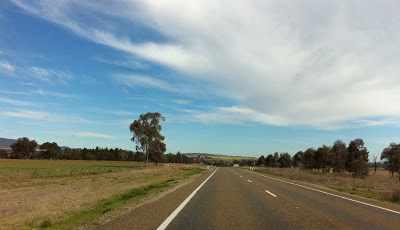 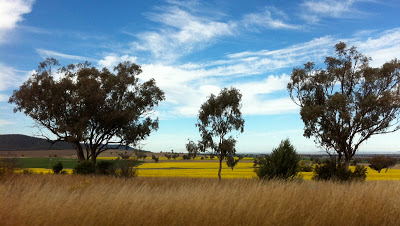 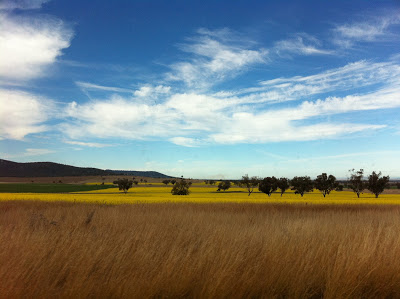 Our accommodations were in Tamworth, but we stopped for bfast at The Verdict Cafe on Conadilly Street (the main drag) in Gunnedah.  Sometimes the most simple meals are the most pleasing.  This (big) plate of bacon and scrambled eggs was delicious, and a great deal at just $8.  The Aussies really know how to cook their scrambled eggs.  Lately, I’ve taken to ordering my eggs that way as they’re always so light and fluffy.  The bacon here was a tad too greasy for my taste, but it was good quality with more meat than fatty bits. 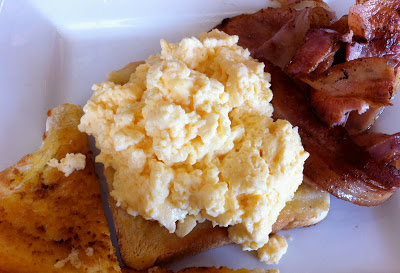 After having set up our booth, we went home for some R&R….which ended up with me going for a run around Tamworth.  It’s a cute little town, made all the more adorable by the local wildlife.  In Canada, you see flocks of pidgeons, seagulls and blackbirds.  In Oz, it’s cockatoos and budgie birds.  Yup, I definitely paused my run for at least 10 minutes to watch them before they spooked and flew away.

When we went out for dinner later, we chose the Dragon Palace on Peel St. We both started with a Short soup – commonly referred to as Wonton Soup in North America.  You can also get Long Soup, which contains long noodles as opposed to the pork-filled wontons.  This one was ‘Oh so good’.  You’d think that this soup would be pretty generic, but this was definitely one of the better versions that I’ve had. 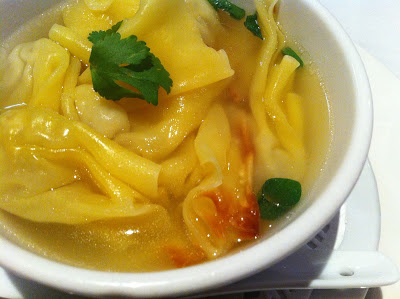 Among other things; a plate of scallops with vegetables; a beautiful paler of steamed veg w/ broccoli, cauliflower and shitakee mushrooms and an order of  beef in Szechuan sauce, my boss introduced me to the most amazing Chinese dish: San Choy Bow.  This dish is particularly popular in Oz, I’m told, and I was blown away by how fresh and flavourful it was.  The minced beef was flavoured with a slightly sweet sauce, dusted with sesame seeds and wrapped in a shell of crisp iceberg lettuce.  Consider it a…low fat Asian burrito, yeah?  This was also an easy plate to dissect, and I’ll be making it at home some day soon. 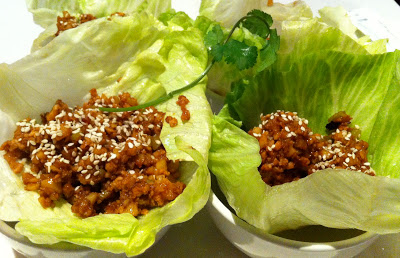 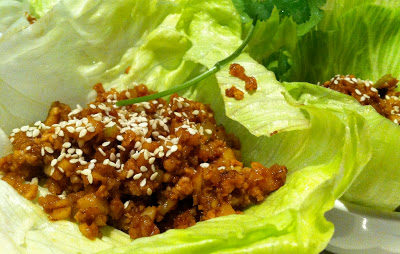 What a meal!  And what a day!  I’ll forever remember that trip to Gunnedah, for the beautiful scenery and for the time that I fist tried San Choy Bow, which will now become one of my favourite home-cooked meals.