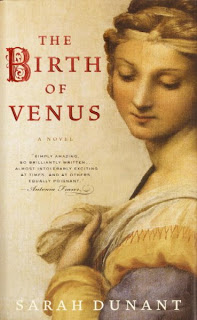 The Birth of Venus(2004), Dunant’s first historical novel, presented a vivid picture of 14th century Florence, its politics, art, and social life, within a suspenseful tale of love and intrigue. The reader shares in the joys and despair of Alessandra Cecchi from the age of 15 when her merchant father brings a young painter home to decorate the family chapel, through a loveless arranged marriage, to her death in a convent in Tuscany.

In the Company of the Courtesan(2006) has as its background 16th century
Venice. Courtesan Fiametta Bianchini flees Rome as it is sacked and burned,
accompanied by her dwarf companion, Bucino. The complicated relationship between Fiammetta and Bucino, who narrates the novel, is central to the plot as they rebuild their lives in a new city. Their story will seduce you as surely as Fiametta seduces her wealthy patrons. 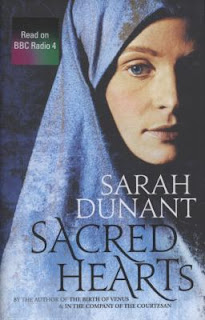 Dunant’s third historical, Sacred Hearts(2009), revisits the world of the convent that was touched on in The Birth of Venus. In 16th century Italy young girls entered a convent for many reasons besides religious ones. Serafina feels convent life is more a form of imprisonment, orchestrated by her father to separate her from a forbidden romance. Her rebellious nature reminds the convent’s doctor of her own youth, as she tries to interest Serafina in the medicinal arts.

If you enjoy strong women characters and rich historical background, these novels will prove to be satisfying reads.