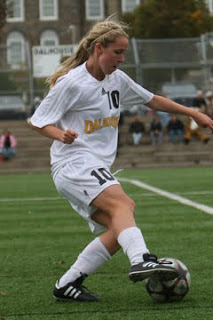 (Photo Credit: Nick Pearce)
by Bill McLean
Shocker in Wolfville; Acadia 17 Smu 7.
This game was supposed to be a tune up for the Huskies before the big event of the year next weekend at the Stadium vs the Laval Rouge et Or.
Oops.
Looking at the stats it would appear that the turnover played a major role as Jack Creighton threw three interceptions for Saint Mary’s. It would also seem that Steve Sumarah is going to go with a two headed monster look at running back with Devon Jones and Craig Leger combining for 104 yards on 20 carries.
Huskies fans should not be too worried about not competing in AUS. Jack Creighton struggled last year in the season opener vs. X and quickly recovered. Justin Palardy’s replacement for the time being, Brett Lauther, kicked two field goals of 28 and 34 yards.
Huskies fans should be worried that the team will compete next week with the number one ranked Rouge et Or next weekend.
Huskies fans can also take solace in knowing that the St Fx Xmen were upset in Sackville, losing to the Mounties 19-6. With the victory, Mount Allison has already surpassed it’s win total from last season.
Tiger’s Soccer off to Good Start; Sweep Acadia at Wickwire.
It was an afternoon of wind, rain, sun, cold, rowdy fans, and Dalhousie domination on the pitch as a batch of 5th year seniors led the Tigers teams to convincing victories over Acadia.
AUS First team all stars Jeannette Huck and Ross Hagan combined for three goals to get their respective teams back on the road to redemption after dissapointing conclusions to their 2009 seaasons.
Local product and fellow fifth year senior Craig Haughn was stellar in the midfield for the Tigers, as was 1st year player Daphne Wallace from Ottawa for the women’s team.
Both teams get back at it on Sunday vs. Universite de Moncton at 1:00 at Wickwire.
In other action;
Women’s Soccer: Moncton 2 Saint Mary’s 0
Men’s Soccer: Saint Mary’s 1 Moncton 0
Other Big Game: Rematch of the ACAA men’s soccer final at Wickwire at 8:00 as the Kings Blue Devils host the Holland College Hurricanes.
email us at haligoniasports@gmail.com, follow is on twitter @haligoniasports