Do you ever wish you could turn back time?  I do, not to alter events but to be more inquisitive with my elders thus being able to pass the story-telling torch onto my children.  My great, great paternal grandmother, Anna Marie Schmeltzer (Nanny Kent), died when I was 11 – she was 86.  My memories of her are limited but what I do recall most was her caring and loving way, the food she cooked was heavenly, and she always seemed happy even though her life wasn’t easy.

Born in Bohemia in 1886, she immigrated to Canada with her father when she was 6 – I do not know if her mother was alive when they left.  At a tender age of 10, my grandmother cleaned homes to earn her keep.  According to my mom, Nanny Kent’s father moved to another province and left her behind leaving her to seek out help from the local Baptist church.  She was born and raised Catholic and converted, as she put it, because they were so kind to her.   She married when she was 16.    These are some of her stories passed down…I wish I was wise enough to have asked my nanny how she managed at such a young age and the obstacles she endured as an outsider.  During the first world war, Nanny Kent had to carry her ID with her at all times even though she was married, with her first child (my grandmother) while her Canadian husband was serving in the war.  The military would knock on her door to check her papers and this regular inspection went on until the war was over.

If I were given the opportunity to turn back the time, oh the questions I would ask!  With my propensity for cooking, I would have wanted to know other dishes she cooked and what was her favorite.  Four generations later and we still talk fondly of Nanny Kent’s German dinners.  These dinners consisted of knodelen dumplings (potato dumplings), hot purple slaw, and roast pork with gravy.  A meal that sticks to the ribs and was so darn delicious!  As a tribute to my sweet great, great grandmother I have deconstructed her purple slaw recipe.  If she were around today I think she would approve. 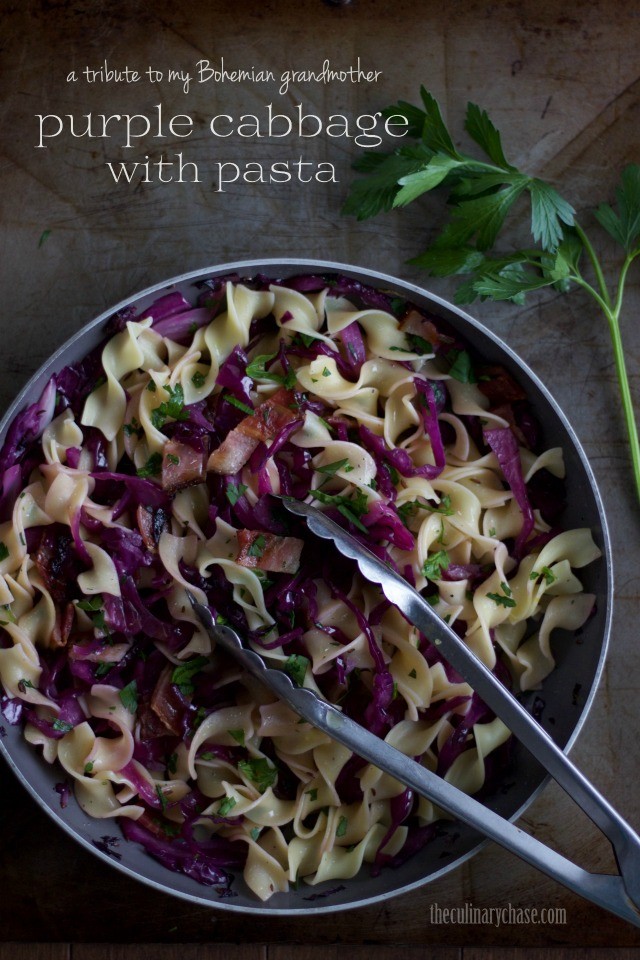 The Culinary Chase’s Note:  If the veggies look a bit dry, add a spoonful or more of the pasta water to loosen it up.  Enjoy!