Earlier this week, we were that family with that kid.

It all started with a trip to Walmart. I’m not sure if anything good can come out of starting a story like that, so I don’t know why  I was at all surprised. We had our Walmart goals: Film needed to be developed, bubbles needed to be acquired, and bread needed to be purchased. We dropped off the film and proceeded into the depths of Walmart, pausing here and there to peek at this item or that thing. And then? we made the worst decision of the entire trip.

We went straight for the toy section.

Cameron’s Nana had bought him a toy that makes bubbles when a lever is pushed. But after a number of uses and being left out in the rain, the toy was out of bubble soap. Cameron loves “buh-bohs” so much that we were happy to purchase some more bubbling soap for his enjoyment. Of course, the bubbles are smack dab in the middle of the toy section, but my husband and I were excited to encourage our son’s playful spirit. Off to the toy section we went.

Cameron had a great time pointing at at the different play things that Walmart had to offer. He even tried to tell us what they were. “Eh-oh” (Elmo). “Buh” (Book). But it wasn’t until we passed a large wall of balls that everything started to go down hill.

“Baaawwwww!” Cameron excitedly informed us. “BAAAWWWWW!” Dan picked up a ball and handed it to Cameron. It was a nice, regular sized, five dollar ball. It wasn’t all that different from a ball he had at home, but it was a fun, cheap toy that my son loved. He tossed it in the air and caught it himself. Then he threw it to Daddy…

And Daddy put it back on the shelf.

The crying started. And it didn’t end until we passed a section of HUGE, GIANT balls.

My husband handed my son one of these HUGE, GIANT balls. And then, he pushed the cart away. 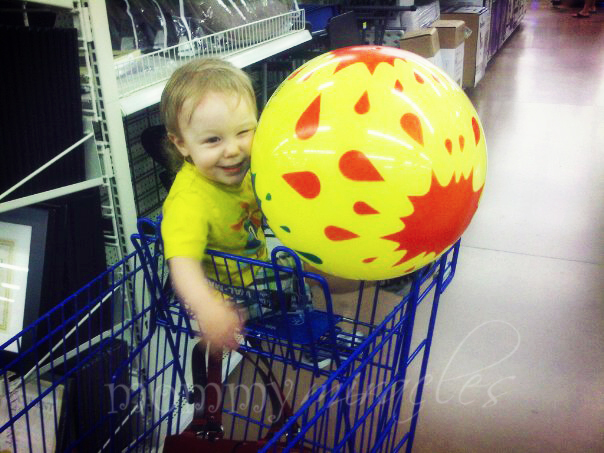 “Are you kidding?!” I asked him? “We’re getting Cameron this HUGE, GIANT ball instead of the regular sized ball that we already passed?”

“It is a dollar cheaper!” my husband proclaimed triumphantly.

As we continued our journey through the kingdom of Walmart, Cameron’s mood only deteriorated, despite the fact that he was seated beside a HUGE, GIANT ball. My son didn’t just wanted to sit beside a ball, he wanted to play with his ball.

My son was having a public tantrum.

Despite knowing that Cam would have been able to entertain himself with a regular sized ball while trucking along in the shopping cart, my husband was adamant that getting Cameron this HUGE, GIANT ball was a good thing. I was assured that the dollar we had saved could go towards some worthy cause like saving children in Somalia or something.

Cameron didn’t at all understand what good he was doing for the world. Instead, he wailed.

Right in the middle of Walmart.

I was so embarrassed.

I felt the stares. I could feel the jeers. I knew that people were rushing in all directions to try to get away from our screaming baby.

We were that family with that kid.

My son is normally such a great boy. He is normally the kid that everyone smiles at and compliments.

And yet, this behaviour is my son learning independence and communication. He is experimenting with his voice and his actions in order to explain to us what he wants. This is a step – an annoying and loud and aggravating step, but still a step towards becoming the person that Cameron will one day be.

I love that person.