As promised, I’ll be taking you through a tour of Ireland as I recap my vacation with Cokebaby and the in-laws over the course of the next couple weeks. Of course, no travel with Air Canada would be complete without a hiccough. In the case of our flight to London, what wound up being a two hour delay out of Halifax International Airport ended up in a random airport Tweetup with @robertsnell.

Here’s how things went down:

Thankfully, aside from being seated in the back of the plane in the cattle compartment, the rest of our travel with Air Canada was uneventful. They even remembered to prepare a special Asian vegetarian meal for me, even if it was lacking in creativity. Airplane food isn’t exactly gourmet but someone needs to overhaul the menu at our national carrier. Air France’s version of Asian vegetarian was an Indian vegetable masala complete with hot sauce, chutney, and other accoutrements.

We were travelling with Cokebaby’s brother and sister-in-law with plans to meet up in a few days with Cokebaby’s sister, brother-in-law and their two kids (ages 17 and 4) en route to Ireland where we’d spend the bulk of our trip. Since we had to land in London to get to Ireland anyway, we decided to take advantage of the opportunity to revisit the city.

Our first stop was the Rose Court Hotel where I’m pretty sure we discovered the world’s smallest bathroom: 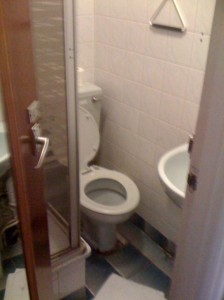 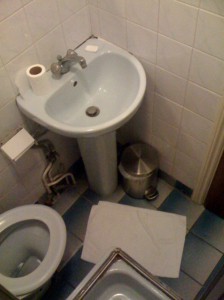 Living space in London is tiny by North American standards so we weren’t expecting much in terms of a hotel room. A previous stay in the city had us situated in a small but comfortable spot called the Chelsea Lodge Hotel.

Cokebaby and I are pretty tall people though so the bathroom at the Rose Court Hotel was a tight squeeze. Don’t even ask how I was able to shave my legs. Let’s just say I can probably now audition for Cirque du Soleil and fulfil every child’s dream of running away with the circus if I so chose.

After stopping in for a pint at a local pub, we explored our neighbourhood and wound up at Madame Tussauds. Now, this sort of thing is usually my cup of tea but after a long day of flying and our bodies coping with the time difference, I was happy enough to visit a silly tourist site.

While standing in line, a couple from Eastern Europe gave us each 2 for 1 coupons. We’re still not sure if they were working for some tourism agency, trying to scam tourists for money, or just giving them away out of the goodness of their hearts. In any case, since the cost of each ticket is £22.50 (roughly $40 CAD), we gladly accepted the freebies.

Once inside, you’re off on a self-guided tour of celebrities past and present. Some of them are astonishingly lifelike while others have a decidedly waxy sheen to them. Unlike other museums you’re even encouraged to interact with the items on display.

I can openly admit to skipping the Chamber of Horrors part of the museum. The idea of seeing death and mayhem hold no appeal for me even if it is just wax. They even added an optional SCREAM feature to that section where live actors, portraying escaped prison inmates, jump out at you. Um, no thanks.

At the end of the museum is a ride of sorts. A line of black cabs on a rail line takes passengers through a wax history of the city of London while also transporting them back down to the main floor of the surprisingly tall building. Not being one who’s particularly enamoured with celebrity life, I don’t think the museum is particularly worth the admission fee but it provided a bit of entertainment on a rainy afternoon.

Next up: A whirlwind day tour of Windsor Castle, Stonehenge & Bath.

Schmoozing in and en route to London
https://haligonia.ca/schmoozing-in-and-en-route-to-london-4196/