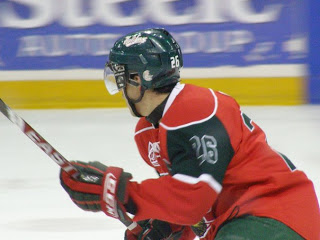 Missed chances and lack of discipline cost the Moose vs. Saint John
For three periods last night the Halifax Moosehead battled not just the Saint John Sea Dogs but the men in the black and white stripes, as the Herd kept the game close through two but were blown out in the third in a 6 – 2 loss.
In a game that was reminiscent of hockey movie Slapshot , the Mooseheads held it close for the first period, but Sea Dog Aiden Kelly scored with under 20 seconds left in the game to take a lead into the second. It was a relief to be down just one goal as the Moose killed off four penalties in the first.
Garret Clarke was his usual truculent self and was running around the ice throwing his body into anything that moved, he eventually got run over himself but Alex Lemieux jumped in and dropped the gloves with Christian Morin.
The league leading Sea Dogs held no punches as they chased Clarke around the ice all night, twice taking liberties with him after the whistle, but much to the chagrin of the Mooseheads bench the penalties kept being called against Halifax.
Early in the second period Charles Bety pulled one back and tied the game at one a piece. However, on their seventh powerplay opportunity of the game the Sea Dogs took the lead again at 11:04.
Halifax came out hard and fast in the third period and the hard work paid off almost immediately. Captain Tomas Knotek scored a highlight reel one timer from Gabriel Desjardins just a minute and a half into the period.
That was as close as the Moose would come as the Sea Dogs answered back seconds later and scored three unanswered goals on the way to goalie Marco Cousineau’s 10th win in a row.
With the score out of reach, the game started getting even more rough and the referees had a tough time keeping control of the players.
At the end of the game, the number one team in Canada showed a lack of a class, as the Sea Dogs players taunted Halifax fans as they skated off the ice.
Three Stars
3rd Star – Charles Bety – Picked up a goal and skated hard all night
2nd Star – Mike Hoffman – Had a goal and an assist
1st Star – Zack Phillips – Scored the game winner and picked up two assists

Halifax blows three goal lead; throws away win vs. Cape Breton
The Halifax Mooseheads had a three goal lead early in the second period but couldn’t hold on to it, dropping Friday night’s contest 6 – 4 to the Cape Breton Screaming Eagles.
A lack of discipline played a large part in the Mooseheads demise and ruined another solid outing by goalie Mathieu Corbeil.
Halifax broke out to a three goal lead with goals from Travis Randall, Gerrad Grant and Bradley MacDonald. But midway through the period the wheels fell off as first Viktor Hertzberg scored shorthanded and then Ashton Bernard pulled even less than two minutes later.
Penalty trouble caused the tying goal as Linden Bahm sat in the box when Canadian World Junior star Luke Adam scored his 41st goal of the season on the powerplay.
With momentum clearly turned in favour of the Screaming Eagles, Mathieu Brodeur scored early and it looked like the Mooseheads had packed it in and given up. However, Grant picked up his second of the night midway through the third period.
Discpline had been the issue for the Mooseheads of recent weeks and Garrett Clarke was once again the focus of the problems as he took a kneeing penalty which resulted in a major penalty and a game misconduct for the under-fire rookie defencemen.
On the powerplay Cape Breton took no chances as they took the lead once again, before Jacob Lagacé added his 33rd of the year to put the game out of reach with just fifteen seconds left.
Announced attendance was just 4,233.
The Mooseheads will have a chance for retribution as they return home to face the same team Sunday afternoon in Moose Country. Game time at the Metro Centre is 2:00.

Three Stars
3rd – Mathieu Brodeur – Had a goal and an assist for the hosts
2nd – Tomas Knotek – The one bright spot for the Mooseheads, picking up three assists in the losing effort
1st – Nick MacNeil – The Screaming Eagles captain led by example adding a goal and two assists, finishing a +3