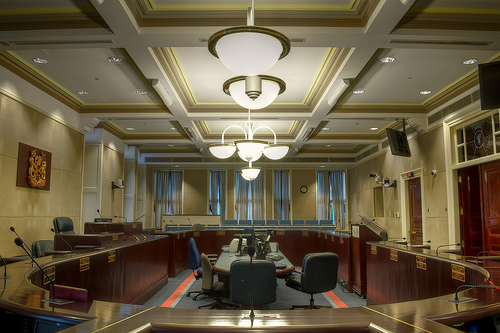 In the wake of Friday's Occupy NS evictions the transparency and due diligence of HRM City Council decision-making is being called into question. In an online article for The Coast, reporter Tim Bousquet has posted an open letter to Council asking for clarification on how the vote and decision to evict Occupy protestors came down.

Bousquet makes the argument that Council's misuse of secret meetings is an abuse of power blatantly in violation of its Rules of Procedure which state that any item discussed or voted upon during an in camera session must first be added to the public agenda before those secret discussions are held. By doing so the public is kept informed of all proceedings in a transparent and accountable manner.

According to the article, Mayor Kelly told Bousquet that the decision to evict Occupy protesters encamped in Victoria Park was added to the in camera agenda during the in camera meeting and not before, publicly, as protocol dictates. We'd like to hear your response to secrecy in Council proceedings Haligonia and the effect it may have had on Friday's evictions.