Do you share your birthday with anyone famous? What about any friends? Is the idea of having a birthday buddy a good thing (someone to celebrate with) or a bad thing (you have to divide your fun)? These authors all celebrate a birthday in September: here they are with a fellow author that shares their birthday. 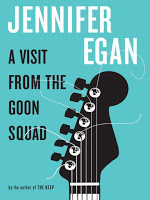 September 6th: Born ten years apart are American contemporary fiction author Jennifer Egan and English fantasy fiction author China Miéville. Egan has been in the press a lot in the last year, her novel A Visit from the Goon Squad won this year’s Pulitzer Prize and the National Book Critics Circle Award. For Miéville 2010 was a big award year. His novel The City and The City won the Arthur C. Clark award and the Hugo (the Hugo was tied with Paolo Bacigalupi for The Windup Girl).

September 12th: Having your new novel at the top of bestseller lists has to be a pretty good birthday present. Such is the case for Canadian author Michael Ondaatje whose The Cat’s Table was released on August 30th and is currently sitting on top of both The Globe and Mail and MacLean’s Magazine lists. He shares his birthday with American author Jon Clinch, author of the novel Finn, which takes the characters of Mark Twain’s Huckleberry Finn and tells a new story. Library Journal said of the novel “Every fan of Twain’s masterpiece will want to read this inspired spin-off, which could become an unofficial companion volume.”

September 21st: Popular American fiction authors Stephen King and Fannie Flagg were born on the same day only 3 years apart. It’s been a good year again for King, he made Forbes magazine ‘s list of the 10 Highest Paid authors and that’s before his new novel 11/22/63 is released this November. Fannie Flagg probably isn’t raking in quite as much as King (and really, few authors are) but still has a credible number of published novels to her name. She is likely most famous for her 1987 novel Fried Green Tomatoes at the Whistle Stop Cafe, but she’s written plenty since: her most recent novel was 2010’s I Still Dream About You.

September 26th: I’ll finish with two true birthday buddies, both born on the same day in the same year: Minette Walters and Jane Smiley. Smiley, from the US, is a Pulitzer Prize winning author of more than a dozen novels of literary fiction, some historical and much with a focus on the relationships between family members. Walters, from England, writes dark crime fiction concerned with both the psychology as well as the action of crime. Smiley’s most recent book is 2010’s Private Life. Walters has been quiet for a few years: her last novel was 2007’s The Chameleon’s Shadow, although her website assures fans of her books that “there is a new one in the works”.