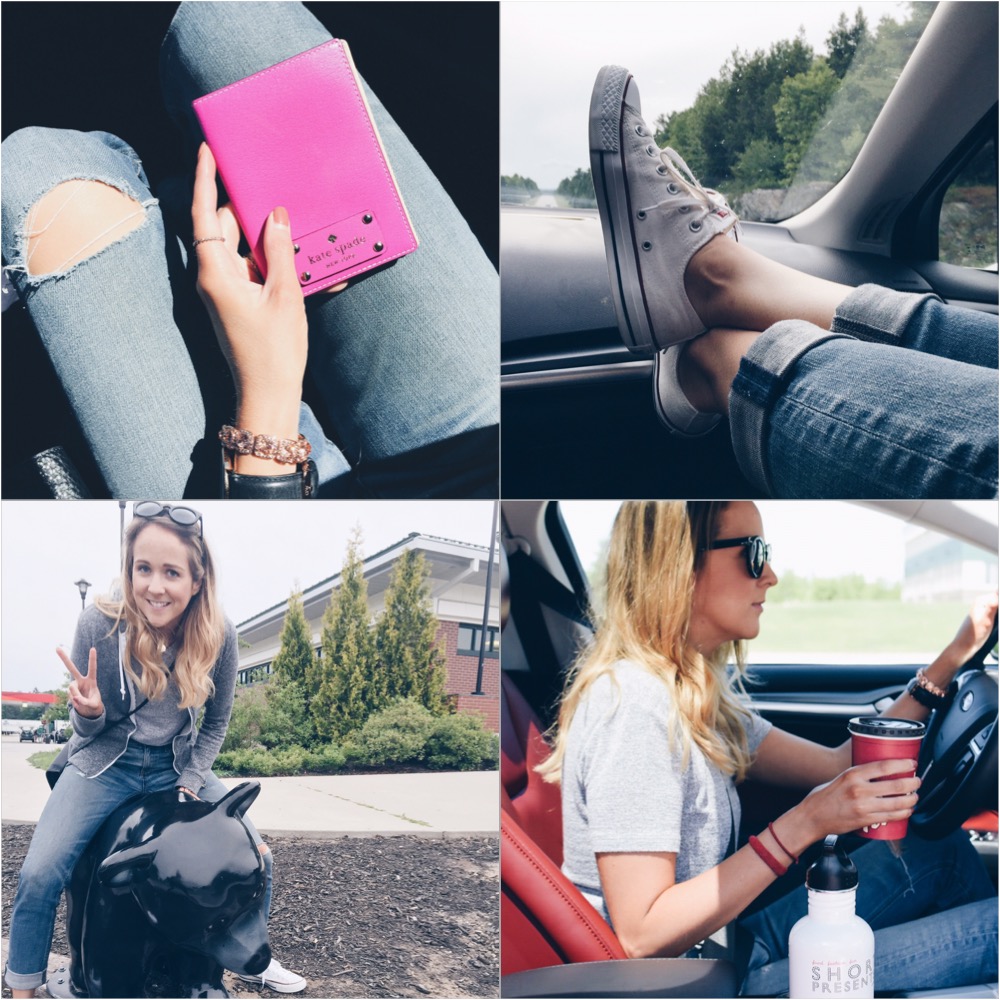 Every now and then you just need to pack everything up and hit the open road. There’s something to be said about road trips, and their ability to provide some mental clarity in way that differs from other modes of transportation.
There’s something that happens while you drive that really helps you work through some things. It’s almost like when you’re in the shower, you know that place where you do all your best thinking? Driving is like that only an extended version of that.
I don’t know about you blog reader, but I kind of love road trips. Now I’m sure the idea of being contained in a car for 11+ hours doesn’t exactly sound appealing, but honestly sometimes it’s exactly what you need. For sure you’re going to want to plan a thing or two ahead of time (for some road trip essentials be sure to read this post >> http://www.shortpresents.com/2015/06/road-trip-survival-guide.html), but it’s also kind of nice to know that the world is your oyster, and you can really decide what you want to do as you do it. I love the freedom in not having a definitive itinerary.
Curious about some of the things I did while on my way to Boston (also know as Bean Town), and when I got there?  Here are some of favorite things to do, eat, and shop, and some snap shots from along the way. 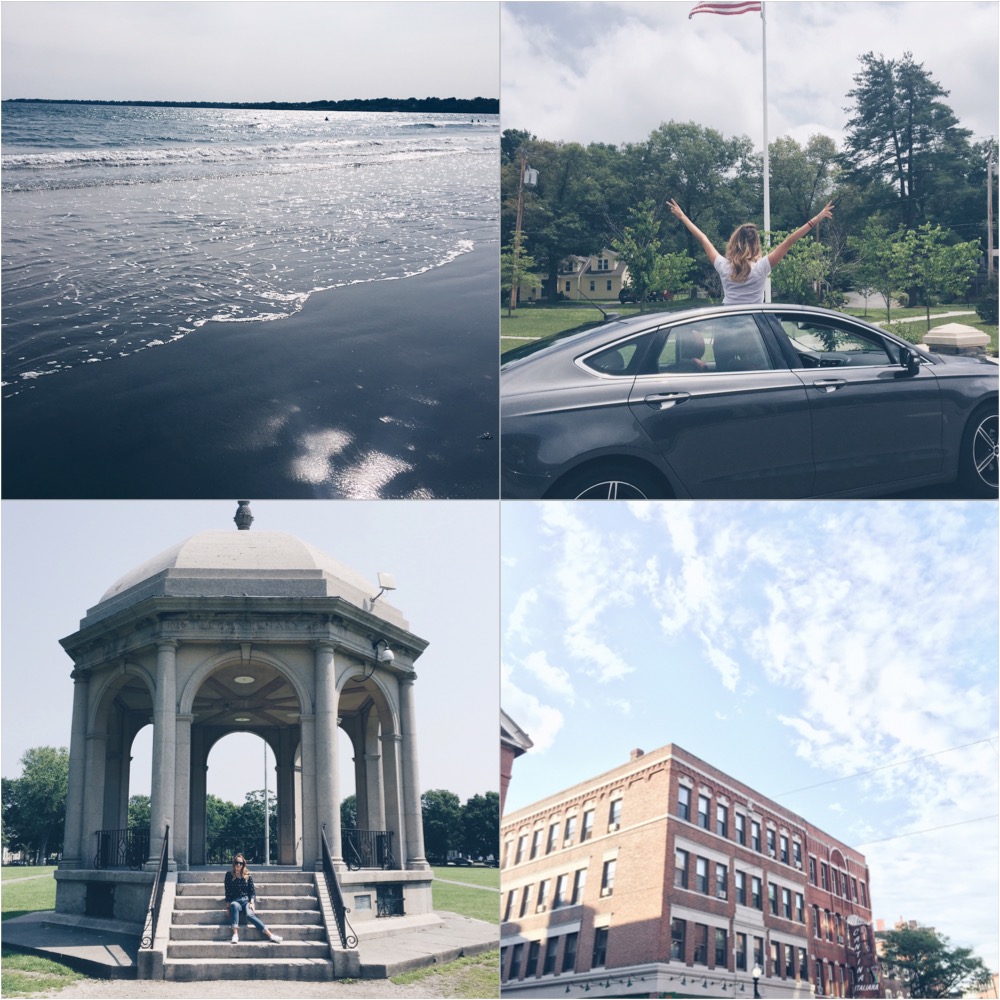 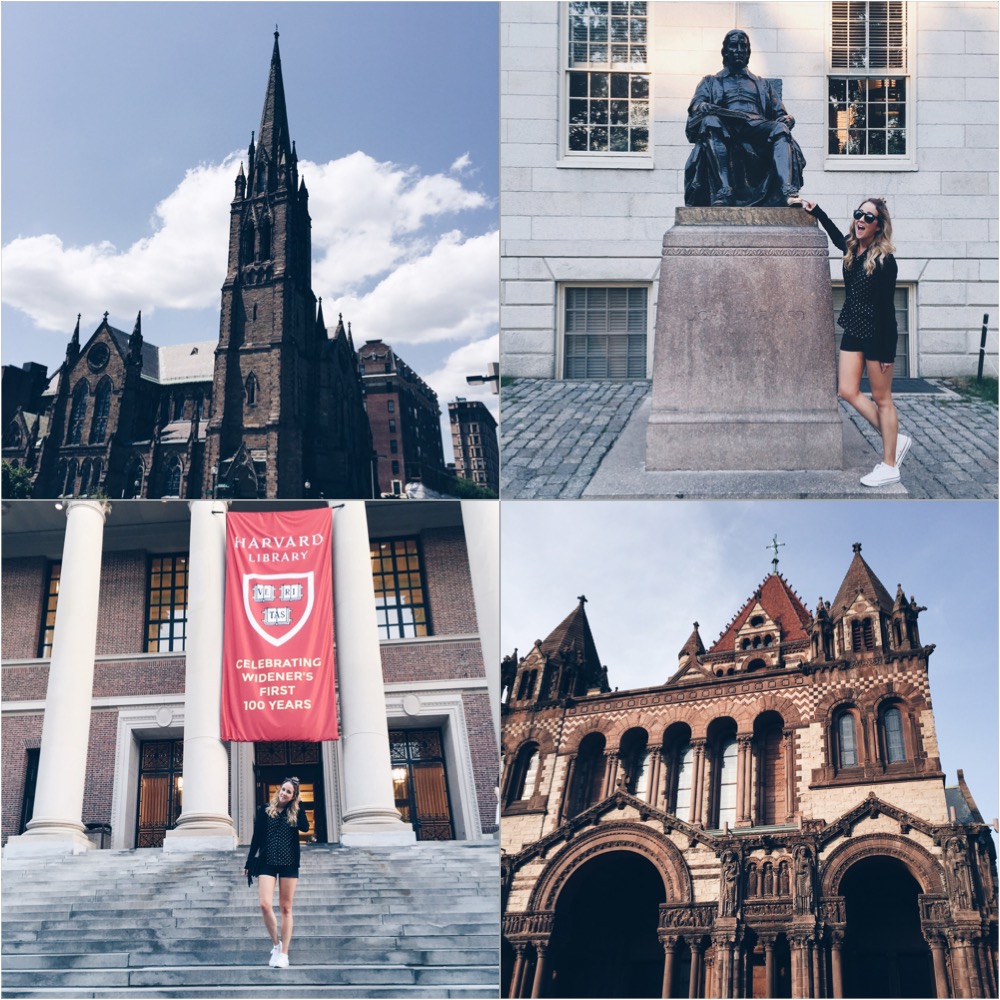 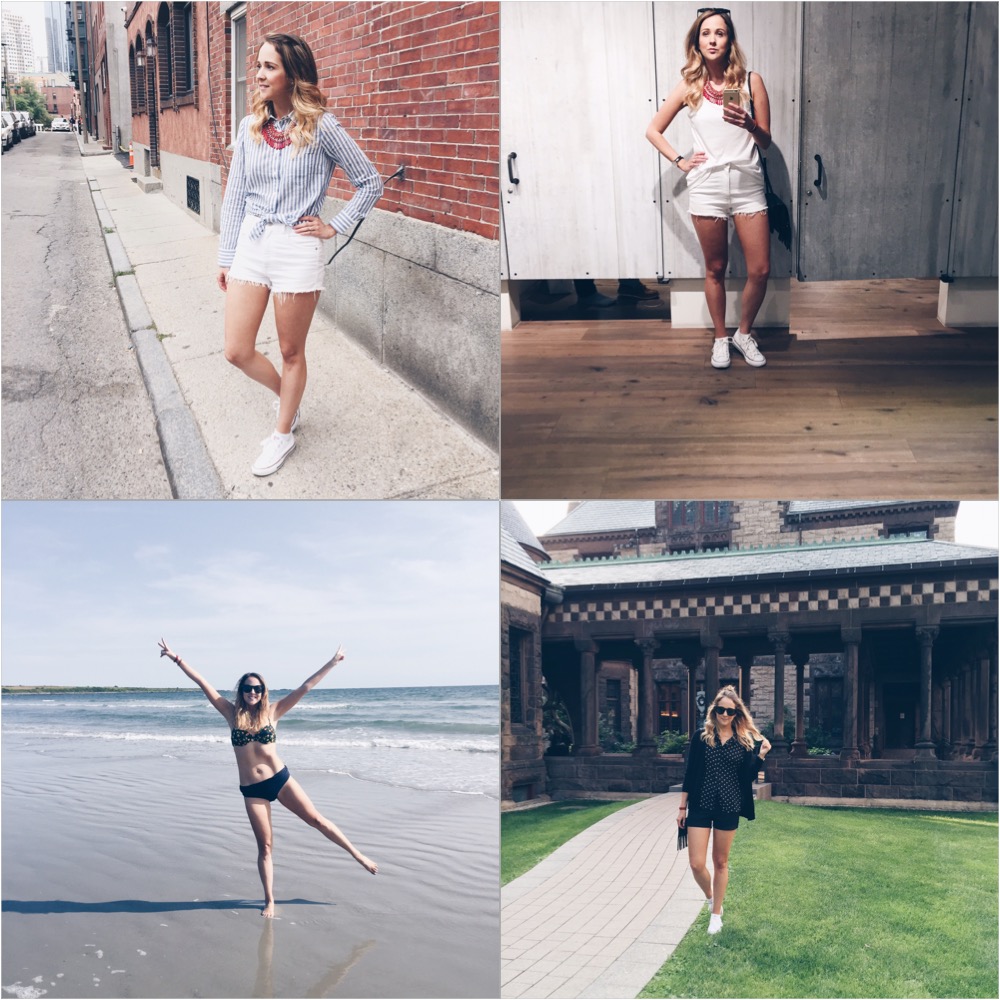 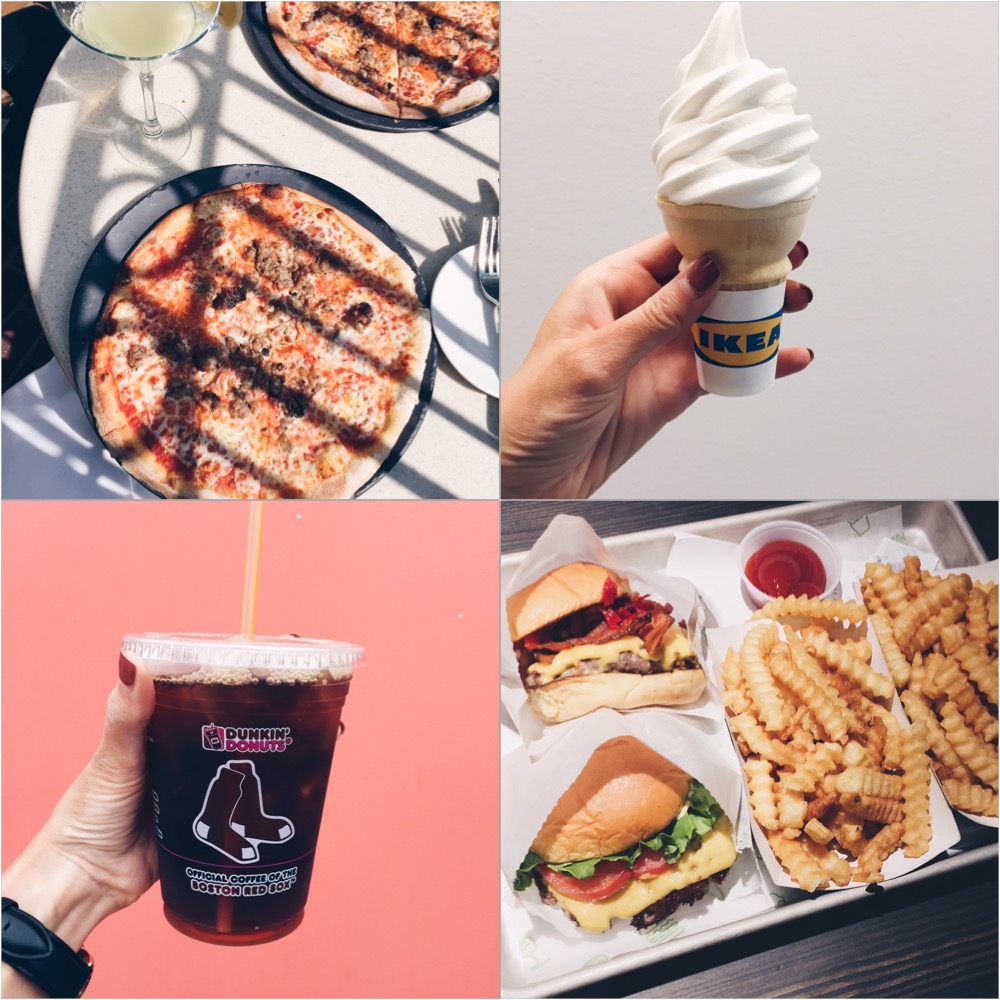 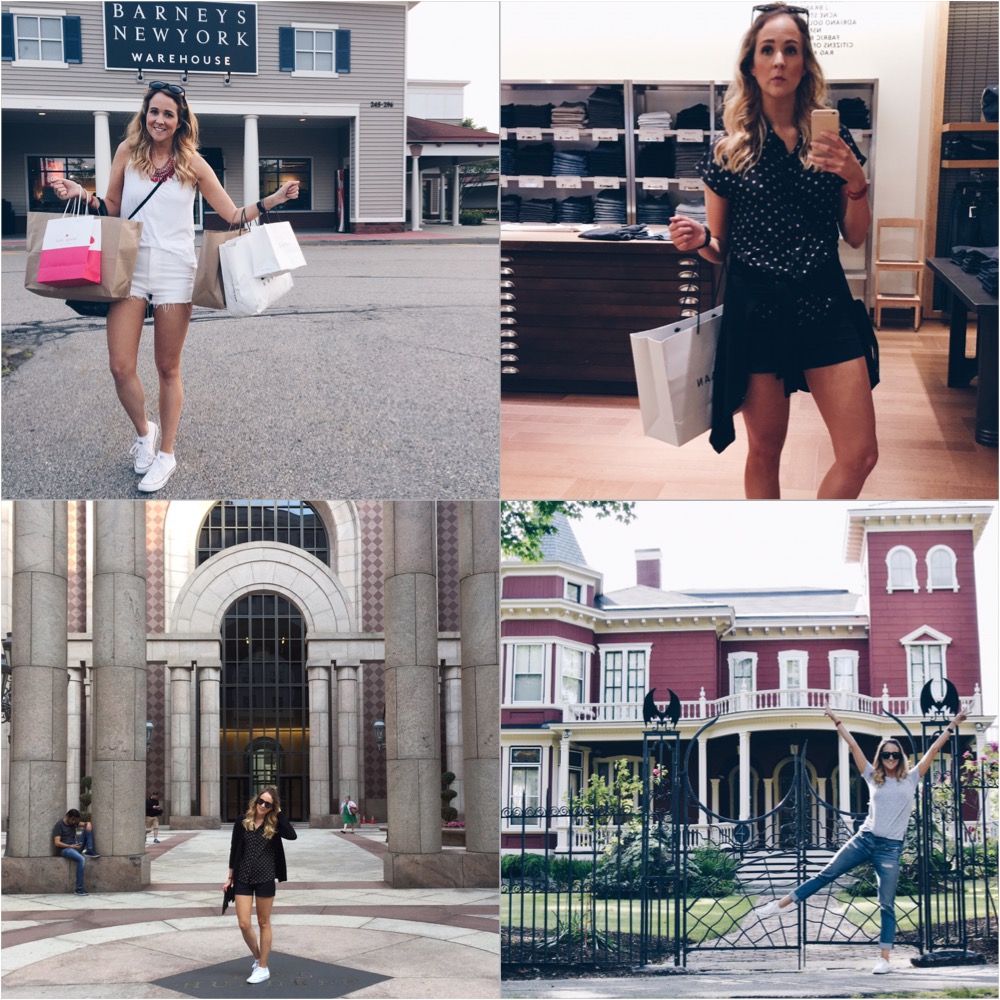 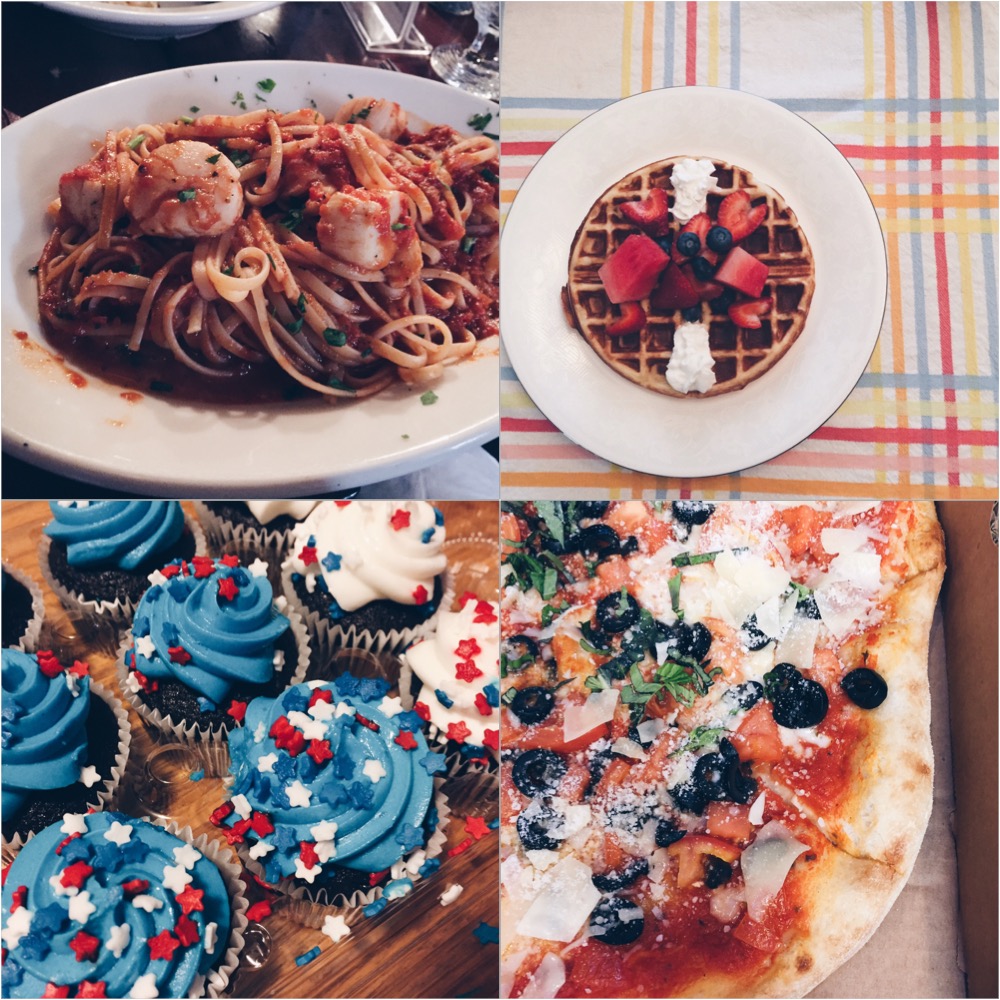 From making a pit stop at Stephen Kings’s house in Bangor (literally only 5 mins off the highway it’s so worth it) to shopping until I dropped at Wrenthum Premimum outlets there was no shortage of fun (and eating) on this trip.  Here are some of the highlights and tips.
WHERE TO EAT
GIACOMOS

Planning on going to Giacomo’s? Be prepared to wait for quite a while. No matter what time of day you visit this resto there’s always a line, and there’s a reason. THE PASTA IS SO GOOD! And it also helps that it’s also very affordable. With a first come first serve, and cash only this resto doesn’t mess around. You’ll be in and out before you even know what you ate. I had a lobster tomato sauce with linguini and scallops (I think), but gosh it was good. I would totally recommend, and you’ll make friends in the line: I promise.

You can’t go to the North End and not make a stop at Mike’s Pastry, but again be prepared to wait (and holler your order). In true Italian form this spot mimics what you’d expect from an authentic Italian bakery, so be prepared to not wait in a line, but instead in a crowd. And make sure your pipes are ready to yell your order. With all that time you spent waiting “in line” you better make sure you’re ready when you hit the front.

Need I say more? Honestly it’s a must if you’re shopping around Newbury Street. There’s a reason these burgs get a lot of media time they are ah-mazing. Don’t worry calories don’t count on road trips. Okay maybe they do, but as long as you maintain a decent lifestyle one little meal of burgers and fries isn’t going to hurt you.

So meatballs aside Ikea has some delish fro-yo! Since you know YOU’RE going you might as well stop for a cold one before you head out.

You love your Tim’s and your Starbs, but give their iced coffee a whirl and you won’t be disappointed. I did however notice that their prices do vary quite a bit based on their location, so be mindful of that.

Located on Newbury Street this spot is nice if you want to eat outside, and the patio is lowered which is nice because you can kind of people-watch, but you don’t feel like you’re being stared at while you chow down on some pizza (I mean I’m a lady). I liked this spot, but I honestly didn’t love the food. I had the pizza, and it was just okay.  It could have used a lot more spice I found it kind of bland considering the menu suggested it was spiced.

Okay where do I start on this gem? I would highly doubt that I would head to Boston without heading to Wretham. It’s kind of funny because I actually bought a lot more items for my home (Hello Ikea and Target), and accessories rather than actual clothing. I did pick up some pieces though, so stay tuned for photos of those coming soon! For a list of shops, and to plan your trip visit their site > www.premiumoutlets.com

Ahhhh Newbury how I love you. If you want to shop high end in Boston this is where you come blog reader.  With stores like Valentino, Brandy Melville, Zara, and even Forever 21 there really is a great mix of shops though. With so many great brands you really can do some damage to your bank account. Proceed with caution! Like Taye Taye says “don’t say I didn’t warn ya”.

I LOVE Kohls I mean it’s one of those stores that you can go in and find nothing, or you can go in and strike GOLD! I found the most adorable pair of while pumps with black ankle straps that I just adore, and bonus they were sold out online, and they were the last pair on the shelf, so I KNOW not everyone and their dog will have them. Not that I really mind when people buy the items I do; I mean I am a blogger and usually I kind of love it, but every now and then I do like to have something to myself.

Since we no longer have this big box store it was kind of nice to revisit it especially for their stationary aisles. I really missed their office, home, and party supplies, so I made sure to stock up on both. From linens to a new gold planner and pencil holder I ended up purchasing some super cute things :):)

Did you know that it’s the oldest park in the country? I adore the Boston Commons and for nothing more than a stroll. It’s so beautiful, and I just love to hang out there with the locals. Boston is such an interesting city, and there’s so must history, so make sure to familiarize yourself so you can learn and experience more!

“Today, Boston Common is the anchor for the Emerald Necklace, a system of connected parks that winds through many of Boston’s neighborhoods. The “Common” has been used for many different purposes throughout its long history. Until 1830, cattle grazed the Common, and until 1817, public hangings took place here. British troops camped on Boston Common prior to the Revolution and left from here to face colonial resistance at Lexington and Concord in April, 1775. Celebrities, including Martin Luther King Jr., Pope John Paul II, and Gloria Steinem (advocate of the feminist revolution), have given speeches at the Common”.  – City of Boston

Want to see penguins? They’ve got em!  And the best part is that The New England Aquarium also works towards rescuing animals. Typically I’m not really a fan of zoos, and aquarium because I don’t believe in holding animals in captivity for my entrainment. Have you seen the film Black Fish? you should (it’s on Netflix). Most times I avoid going just so that I’m not voting with my dollar I think the more we reinforce torture as a form of our entertainment the more it’s going to go on.  For a complete list of the animals visit their website >> www.neaq.org/animals_and_exhibits

The New England Aquarium is also a part of the Boston City Pass (which I would totally suggest), so if you plan on doing a couple different things you really can save quite a bit by purchasing the booklet.

There’s almost always SOMEONE in Boston, so take a peek around to see who’s in town when you are! I think Madonna was when I was there, but I already had tickets for Madeleine Peyroux at the Berkley Collage. It was a great concert (quite intimate) Madeleine Peyroux and she was equally as lovely in person, as she sounds on her records.

Do explore the Harvard yard, not only is it FREE it’s beautiful, and again SO beautiful. Just don’t expect to see the “Harvard” from Legally Blonde like I did because that’s actually a school in California lol. True story I was like “are you sure we’re at Harvard I feel like it looks different?” yeah I think my blonde was showing that day. For sure a must do though! If you go into the science building you can see the first computer which I thought was pretty cool considering I was taking a photo of it with my phone, and it was a FRACTION of the size.

Okay so I have to be honest I was not as educated about the Salem Witch Trials as I would have hoped. I had NO idea how many people were affected by this bout of paranoia. All I can say is WOW. What a tribute to what can happen when people are ignorant, and scared. We always fear what we don’t understand but geese this was really intense you guys. If you’re passing through I would highly recommend you pop into this museum that puts on a presentation that tells the story of what happened and pays tribute to the “innocent”. Stopping in here really made me want to learn more about what happened; I’m going to do some research and find a good book on the subject because I need to know more about  what went down.

So these are my highlights, and tips for Boston blog reader! If you have any questions please do not hesitate to comment below, or touch base on one of my social media accounts (@shortpresents) I’m happy to give you a hand should you be planning a trip!

I also want to give a major shout out to Ford Canada for this amazing trip! I had a blast, and the  Fod Fusion was SERIOUSLY smart! From the censored window wipers, and high beam lights. I mean how clever are you for turning off when faced with apposing traffic? Thanks for allowing me to not be an accidental a$$hole when I drive. The collision warning (although startling at first) was also very helpful the one time someone got a little too close to me. Clearly I adored the sun roof, and the red leather seats. I mean. How could you not?
Obviously the GPS saved our butts I mean how did people travel before? I’m so sorry I doubted you, and printed off a hard copy of the directions. I should have trusted your superior skills and capabilities to be fair I’ve been burned before so I may or may have trust issue. Thanks Ford I had a blast, and I don’t have a single negative thing to say.

What to know what I’m up to next? Be sure to follow along with me on my social media accounts (@shortpresents)! 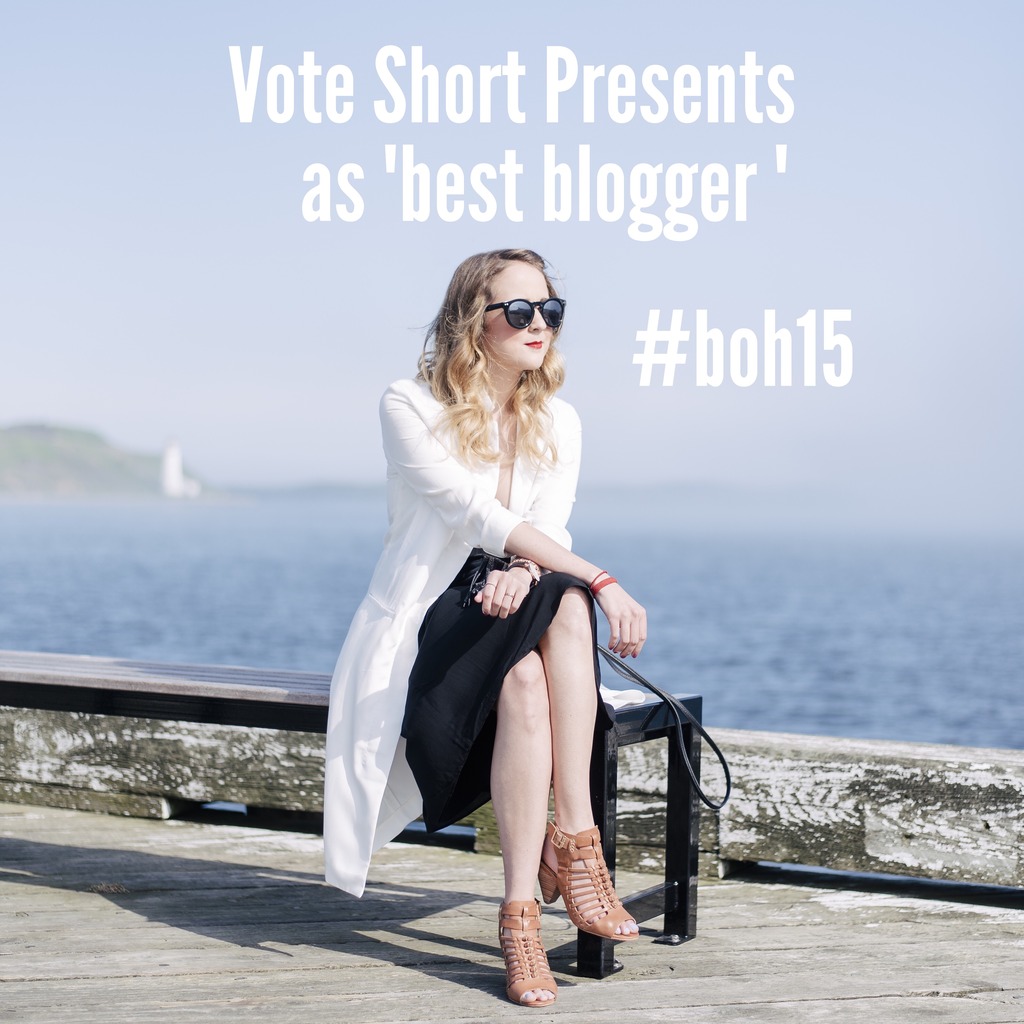 If you get a quick second it would mean THE WORLD to me if you gave me a vote in The Coast’s Readers Choice Awards for “best blogger”. Here’s the link >> http://thecoast.secondstreetapp.com/l/Best-of-Halifax-2015-BOH15/Ballot/NewsandMedia