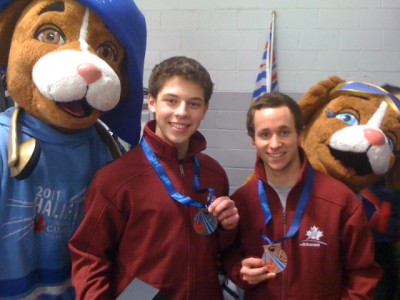 Silver and Bronze for NB on Day 3 of Canada Games 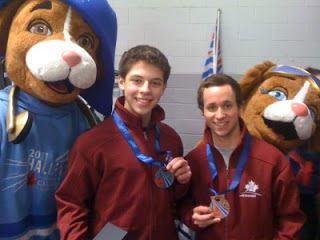 It was successful day at the 2011 Canada Games for New Brunswick speed skating. Not only did their 3000 meter male relay team qualify for the finals on Thursday, but they put two athletes on the podium of the Men’s 500m event.

At first it seemed like Andrew Evans would be the only Maritime on the podium with gold medal winner Alexandre St-Jean from Quebec, as the tight race finished with Maxime Gauthier of Quebec in third place. Following the race however Gauthier was disqualified for a violation during the race, bumping Evan Brideau, aged 17, up into the bronze medal. Watch the full race below along with some of Evans and Brideau’s post-race celebration in front of very pro-New Brunswick crowd at the St. Margaret’s Bay Centre.

Evans and Brideau kept the momentum rolling as they later joined their teammates for the Men’s 3000m Semi Finals. New Brunswick qualified for the finals by easily winning their race and will be joined by fellow Semi Final winners Quebec and Ontario. The team from Alberta also draws into the final on account of posting the next fastest time.

Other events on the day saw Courtney Shmyr of BC take hoe the gold in the Ladies 500m event. Quebec picked up another pair of medals by Cynthia Mascitto and Elisabeth Albert winning silver and bronze respectfully.

In other news of interest from Day 3, Nova Scotia put in a valiant effort, but came out on the losing side of 5-4 shootout game against strong team from Quebec.