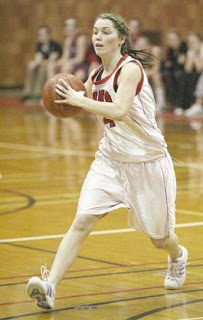 Leah Corby scored 37 points in a two game set vs. the UPEI Panthers.

by Christopher Cameron
Entering the weekend just back of first place CBU, the Varsity Reds women’s basketball team got the job done at home, sweeping the UPEI Panthers with 90-66 and 98-78 wins.
With Megan Corby out of the line up, UNB showed they had the depth needed to pick up the wins, although UPEI did not make it easy.
In their second game of the doubleheader UPEI kicked off the game on an 8-0 run, with UNB bouncing back with some stellar play from Melissa Foster to close the gap.
A back and forth end of the first quarter saw UNB come out on top 30-21 in a high scoring first quarter.
The second quarter was more back and forth play as UNB struggled offensively and the Panthers found their stride of offense, opening up the quarter on a 5-0 run, dropping 20 points in the quarter. UPEI closed the gap to two points after the first half, with UNB barely taking a lead into the locker room 43-41.
After halftime a fiery Varsity Reds team came out of the locker room jumping out to a 10-0 run to kick off the quarter. Up 55-41, UNB’s quick start began to fall apart as the Panthers put a 10-0 run of their own together, closing the lead to one point with four minutes left in the quarter.
Leah Corby came through drained a pair of baskets for UNB to open up the Varsity Reds lead again, kicking off an 11-0 run before UPEI hit the final basket of the third, with UNB taking a nine point lead into the final quarter.
In the fourth quarter the Varsity Reds edged out UPEI a back and forth quarter to finish the game with a 98-78 win.
Corby was named the player of the game for the Varsity Reds posting 19 points and two steals, while Amy Gough earned the title for UPEI.
Head coach Jeff Speedy was pleased with his teams play in the third and fourth quarters, especially a couple big stretches.
“There were stretches in the third and stretches in the fourth where for a couple minutes at a time we played really great defence, which allowed us to make a run,” said Speedy. “We talked at halftime that we thought we could score a lot, but we we’re going to be able to go on a run until we got some stops and allowed our defence to get us some easy baskets.”
Corby said that their main focus in the second half was defence and getting stops.
“I don’t know what we were doing wrong on defence,” said Corby. “We just tried to really focus in the second half on defence and getting stops because we know we can score, so we just had to get the stops in the defensive end.”
In their first game of the weekend UNB proved relentless in their attack with a strong first quarter, which saw them open up a 24-13 lead.
Their strong offensive pressure continued through the second half, outscoring UPEI 24-17 en route to a 48- 30 lead going into halftime.
After halftime the Varsity Reds came out, not letting up on the gas at all, scoring 24 points for the third straight quarter, taking a commanding 72-44 lead into the final quarter.
Losing their only quarter of the game, UNB saw UPEI outscore them 22-18 in the fourth, but it was a little late for the Panthers as they succumbed to the Varsity Reds offensive power, losing 90-66.
Claire Colborne led the team in scoring with 27 point with three rebounds, with Leah Corby being named the player of the game with 18 points respectively, seven assists, four rebounds, and three steals.
Next weekend UNB is home for their final home game in the LB Gym, taking on CBU Saturday.
Speedy says the team will take off tomorrow and begin to think about CBU on Monday.
“We have to get healthy,” he said. “We’ve got a bunch of people with the flu. I’m not going to
think about CBU until sometime on Monday. We’re going to take tomorrow off and start worrying about them on Monday.”
Christopher Cameron is the Sports Editor for The Brunswickan student newspaper at the University of New Brunswick. Follow him on twitter @ccam1988.