By guest blogger Lara.
Today we start out on an Indian reservation in Spokane, Washington, and pass through Arkansas on our way to Mississippi in this installment of the Six Degrees of the Library Collection series of posts. 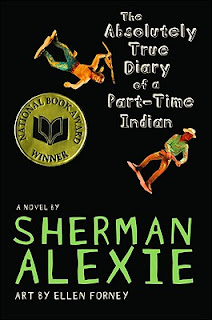 Recently I enjoyed Sherman Alexie’s The Absolutely True Diary of a Part-time Indian (2007), a young adult story that mixes a diary style account with lots of doodled illustrations of the thoughts and frustrations of budding cartoonist Arnold “Junior” Spirit. Junior makes the tough decision to leave the high school on the reservation where he is among his peers, in the town where every neighbour knows intimately the doings of everyone else, to attend an all-white,less poor high school outside the “Rez“. Junior’s struggles to fit in are heartrending, but he handles every situation with a bravery and sense of humour that captivated this reader from the first page to the last.

Alexie has also written such short story collections as The Lone Ranger and Tonto Fistfight in Heaven (1993) and Ten Little Indians: stories (2003). Agatha Christie also wrote a novel with the name Ten Little Indians, published far earlier, in 1939 originally. In the UK, the same mystery novel was published as And Then There Were None.

Gilbert Morris wrote a mystery novel in 2000 with an almost identical title to Christie’s 1939 work: And Then There Were Two, and I can’t help but connect these works, even if Morris’s is set in New Orleans, while Christie’s is (coincidentally where Alexie is concerned) set in a place called Indian Island.

Morris is an alum of the University of Arkansas. Other notable alums there include Bill and Hillary Clinton, who were also faculty members at the Law School in the mid-70’s. It would be too easy to mention some of the books the Clintons have written, so I’ll move along to Ellen Gilchrist who is a current faculty member at the University, as well as a successful author.
Gilchrist’s latest work, A Dangerous Age, came out in 2008. Rooted in a traditional southern US foundation of hospitality and family, the story also deals with current events, including 9/11 and veterans of the Iraq war. Gilchrist portrays a family struggling to deal with shared loss and the helplessness that comes with uncertain times. 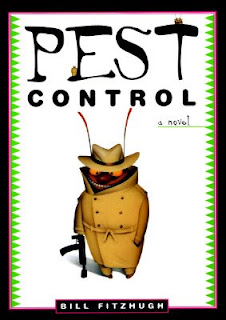 Fitzhugh is also from Mississippi, as it happens. His big break as a writer was his 1997 novel, Pest Control. The protagonist, Bob Dillon (not that Bob Dylan), is an unusual sort of exterminator who gets mistaken for a top notch assassin, and Fitzhugh’s writing is humorous and fun. Also held at Halifax Public Libraries is Highway 61 Resurfaced (2005), which draws on Fitzhugh’s history as a disc jockey, incorporating equal parts of mystery and comedy. Highway 61 Resurfaced is the sequel to Radio Activity (2004).
Thanks to guest blogger Lara.
In addition to her library work, Lara blogs on a regular basis for Re:Print, a books blog at PopMatters.com, an international magazine of cultural criticism.