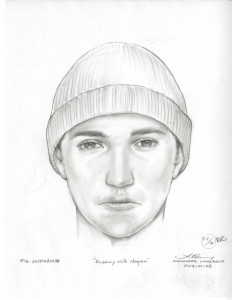 East Hants District RCMP is releasing a sketch of the suspect in an armed robbery that occurred in Mount Uniacke.

The incident occurred in the early hours of December 14, 2017 at a service station on Hwy. 1, when a man entered the business and asked the clerk for cigarettes. He then produced a large black knife, and asked for all of the money. Another vehicle entered the parking lot, and the clerk told the suspect to leave. He fled the store on foot and got into the passenger side of a vehicle which was parked on the side of the road. The vehicle headed in the direction of Lower Sackville. Nothing was stolen and no one was hurt. RCMP members made an immediate patrol to the area and did not locate the suspect(s).

The suspect is described as a short white man in his late 20’s with a thin build. He had some stubble on his face.

The investigation remains ongoing. Anyone who has information about the these incidents is asked to contact East Hants District RCMP at 1-800-803-RCMP (7267), or 902-632-2424. Should you wish to remain anonymous, you can also contact Nova Scotia Crime Stoppers at 1-800-222-TIPS (8477) or text TIP202 + your message to ‘CRIMES’ (274637) or submit tips by Secure Web Tips at www.crimestoppers.ns.ca. Calls to Crime Stoppers are not taped or traced and if police make an arrest and lay charges based on a tip, callers qualify for a cash award.